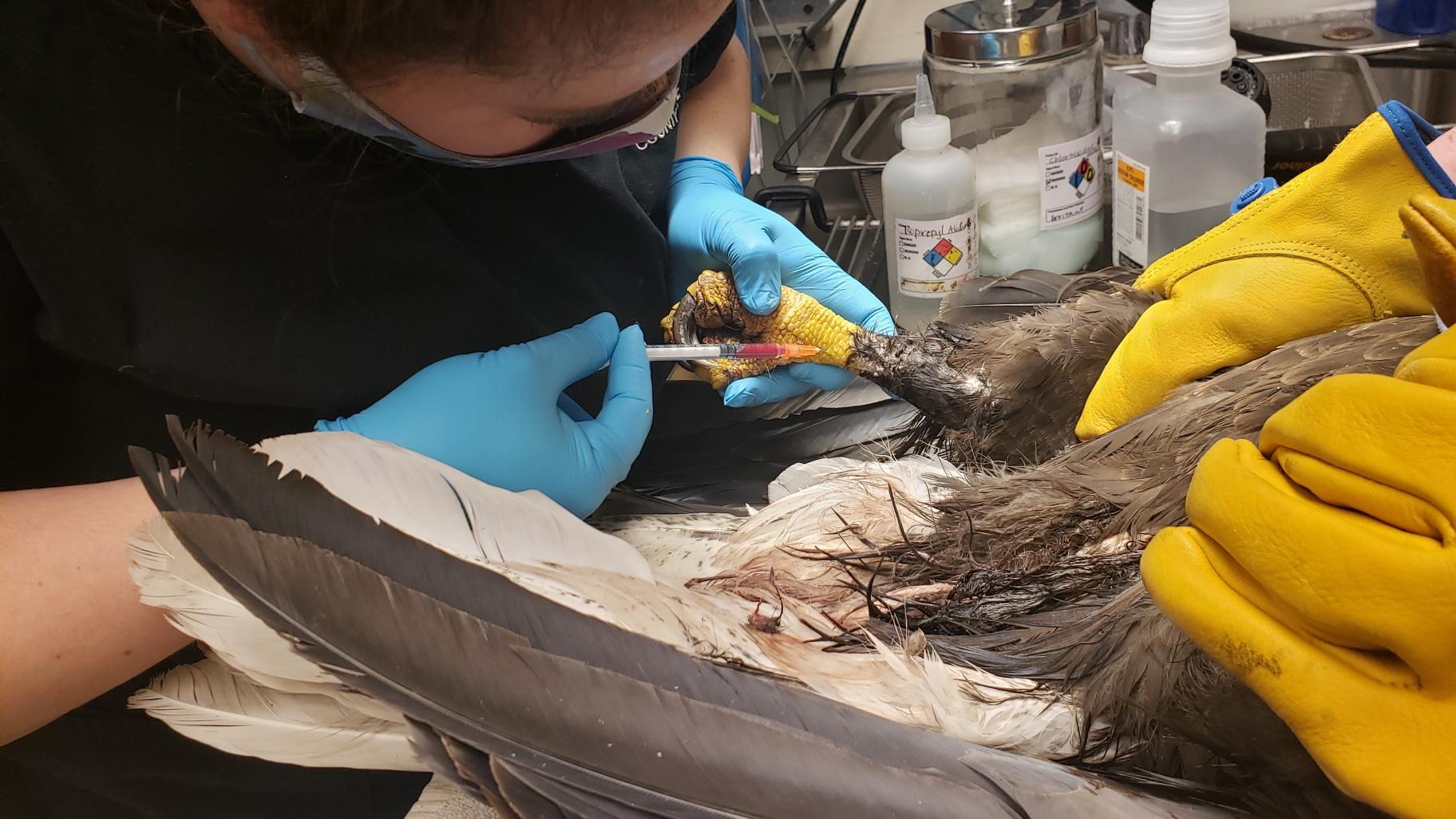 The resurgence of the bald eagle population, once facing extinction, is one the nation's great conservation success stories. But a new threat to the raptor's survival looms, and it has struck surprisingly close to home.

The first patient that arrived at Willowbrook Wildlife Center in 2022 was a bald eagle rescued from a Cook County forest preserve by Chicago Bird Collision Monitors.

The bird, one of a known pair, had been observed sitting in a puddle in the snow for three hours straight, which is not normal behavior, said Dr. Sarah Reich, the center's head veterinarian. When the eagle arrived at Willowbrook, a unique facility in DuPage County with a full veterinary staff, Reich saw that it was covered in a large amount of blood.

"One of our first concerns was that it had been shot," said Reich. X-rays ruled that out, as well as any fractures. The veterinary team was stumped. Why was the raptor so debilitated?

"This eagle was not sassy, which is not typical," Reich said. The birds have a reputation for being aggressive in captivity, requiring handlers to load up on protective gear.

A look inside the eagle's mouth revealed pale gums, an indication of anemia, which tests confirmed. The bird's red blood cell count was half the level it should be, and the Willowbrook team began to suspect the cause.

"One of the only reasons we see where birds hemorrhage uncontrollably is with rodenticides," Reich said, referring to a class of chemicals more colloquially referred to as rat poison. "Anticoagulant rodenticides make it so they can't clot."

After drawing some blood from the eagle and placing it in a tube, the team waited for it to clot. And waited. And waited.

"A normal bird should clot within three to five minutes. This bird, I left for the day and it still hadn't clot, seven hours later," said Reich. "That is definitive for us to say this animal had anticoagulant rodenticide. More than likely, this bird had a tiny, tiny, tiny little cut, and that cut just kept on bleeding."

A bloody bowel movement later provided evidence the bird was bleeding inside as well as on the outside.

"He would have died," Reich said.

In the 1960s, there were barely 400 breeding pairs of bald eagles in the the lower 48 states. A primary contributor to their decline was the pesticide DDT: Run-off from farm fields wound up in fish eaten by eagles. One side effect of DDT was that it caused eagles to lay eggs with shells so thin, nests failed, according to the American Bird Conservancy.

DDT was banned, eagles were afforded a number of protections under the Endangered Species Act, and their numbers rebounded to the point the raptor was removed from the endangered list. Today, thousands of eagles spend their winter in Illinois, representing one of the largest contingents outside of Alaska.

While DDT is no longer an issue for eagles, other deadly toxins have emerged as concerns, including lead, mercury and rodenticides, which mainly target rats and mice but also kill squirrels, chipmunks, woodchucks, voles, porcupine, beaver and nutria. These pesticides have different active ingredients and work in a variety of ways — some attack the rodent's nervous system, for example — but it's the anticoagulant formulas that have come under scrutiny as a hazard to eagles and other wildlife. 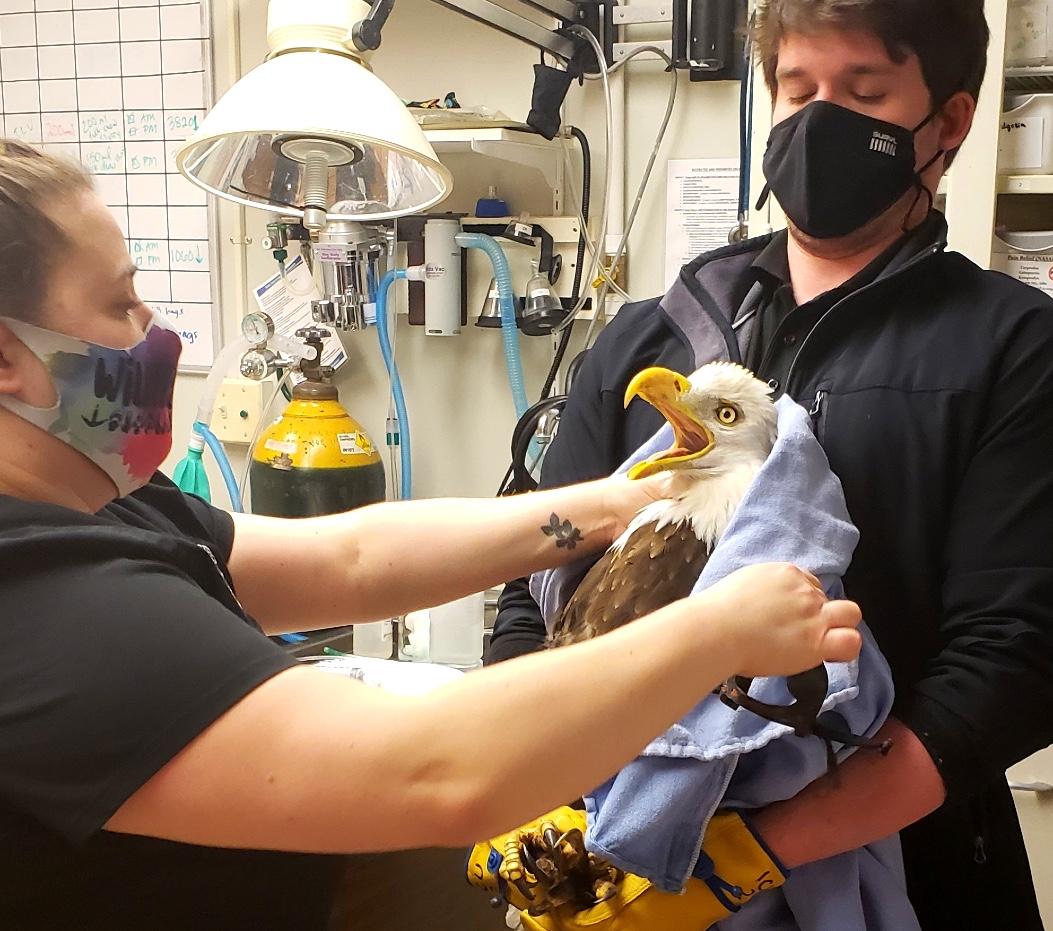 This is an eagle when it's not sassy. Dr. Sarah Reich and Willowbrook wildlife keeper Mike Wittman handle the injured raptor with care. (Courtesy of Willowbrook Wildlife Center)

The names of anticoagulants found in rodenticides might sound familiar: Warfarin (or its brand name, coumadin) was used early on until rodents developed a resistance to it. "It's weird," Reich acknowledged, that something prescribed for humans to prevent blood clots would have a more nefarious purpose as a poison.

A second generation of anticoagulant rodenticides has since been developed — brodifacoum and bromadiolone are the two most common — and they're far more potent. They work by inhibiting an enzyme that helps recycle vitamin K, which is necessary for clotting. No enzyme means a body's vitamin K will eventually run out; no vitamin K means no clotting.

Any tiny bump will cause a hemorrhage in an animal that's ingested the poison, Reich said.

Eagles, it should be noted, don't eat rat poison, Reich clarified. The problem is, they eat the rodents that eat the bait. Or they eat the thing that ate the rodent that ate the bait. The anticoagulant rodenticides are so powerful and linger in an animal for so long, they get passed up the food chain.

"Not only can they kill things better, but they stick around for much longer," Reich said.

Some eagles will suffer acutely and have an immediate reaction to the toxins. Others will accumulate lower levels gradually, snacking on a mouse here and a mouse there, developing a case of chronic poisoning, said Reich. "Eventually they just clot so slowly that they will bleed out, but it will take months to a year for it to happen."

Reich understands that it's "100% a hard sell" asking people to give up on pest controls. Her suggestion is to read containers, check the active ingredients for brodifacoum and bromadiolone, look for the term anticoagulant and maybe choose a different option. Or go the route of snap traps, she added, which are another more humane method.

"It's always a good conversation for people to have. We're going to keep poisoing our wildlife if we keep trying to use these (rodenticides) for mice and rats," Reich said. "The mouse and rat, it doesn't kill them immediately. They go and eat that meal (the poison bait), and then they go and die three days later. So what happens between that time of ingestion and three days later? They could have been eaten by multiple creatures. It's eye-opening for some individuals." 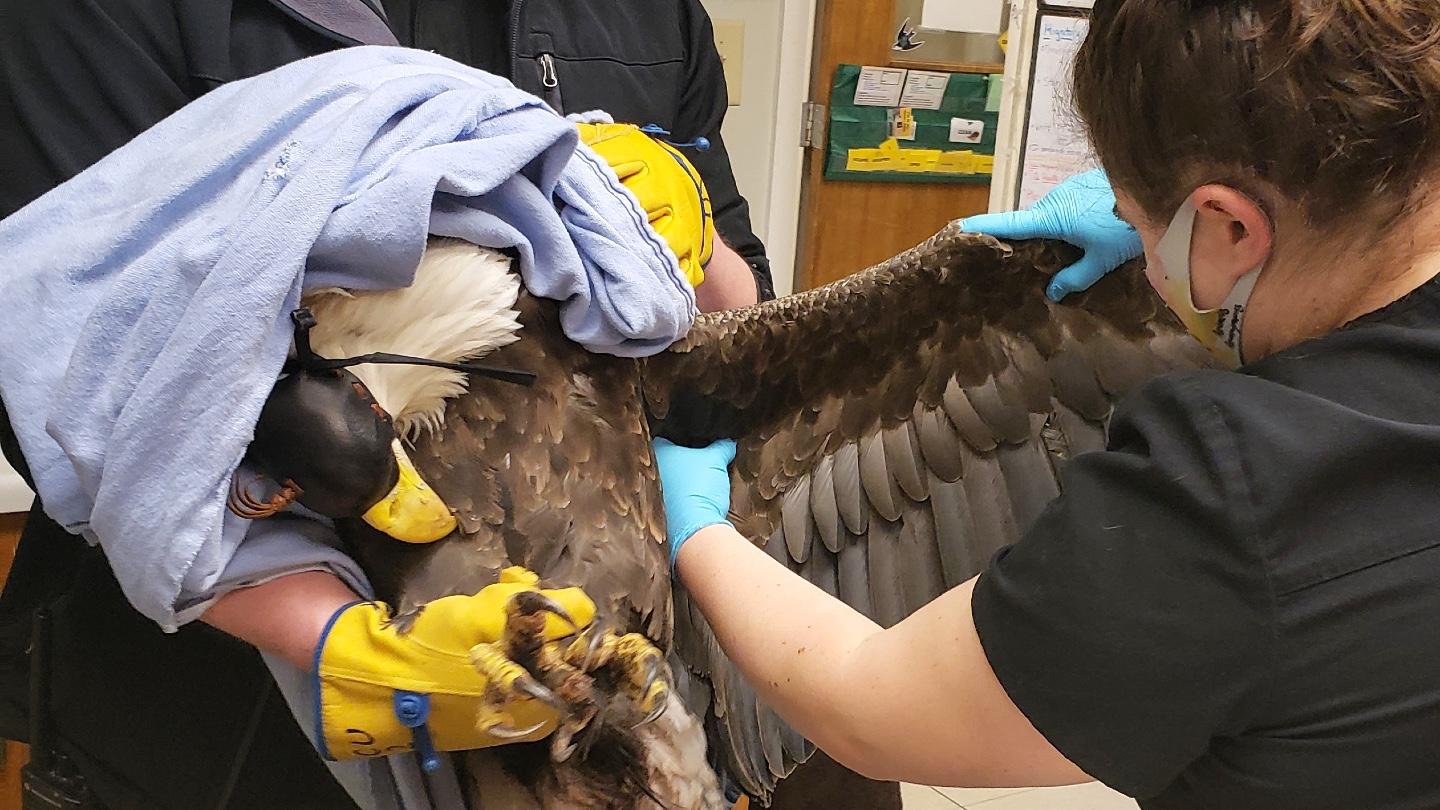 A falconry hood is placed over the eagle's eyes and ears to help relax the bird and make the exam easier on the bird and handlers. (Courtesy of Willowbrook Wildlife Center)

The good news for the eagle in Willowbrook's care is that the treatment to counteract anticoagulant rodenticides is fairly straightforward: administer vitamin K.

Sometimes a blood transfusion is required, but so far one hasn't been necessary. The poisoned eagle is already "much sassier," Reich said, and is up and flying around an enclosure.

It typically takes a month for anticoagulant rodenticide to cycle through an animal's system, she said, at which point Willowbrook staff will conduct the same test they used to diagnose the clotting issue in the first place. If the bird's blood-clotting time passes muster after being checked and re-checked, the raptor will be released back into the forest to reunite with its mate. Staff will be thrilled to see it go.

"Wild animals don't want to be around people. They do not want anything to do with us," Reich said. "In a month and a week, he'll be back out there."