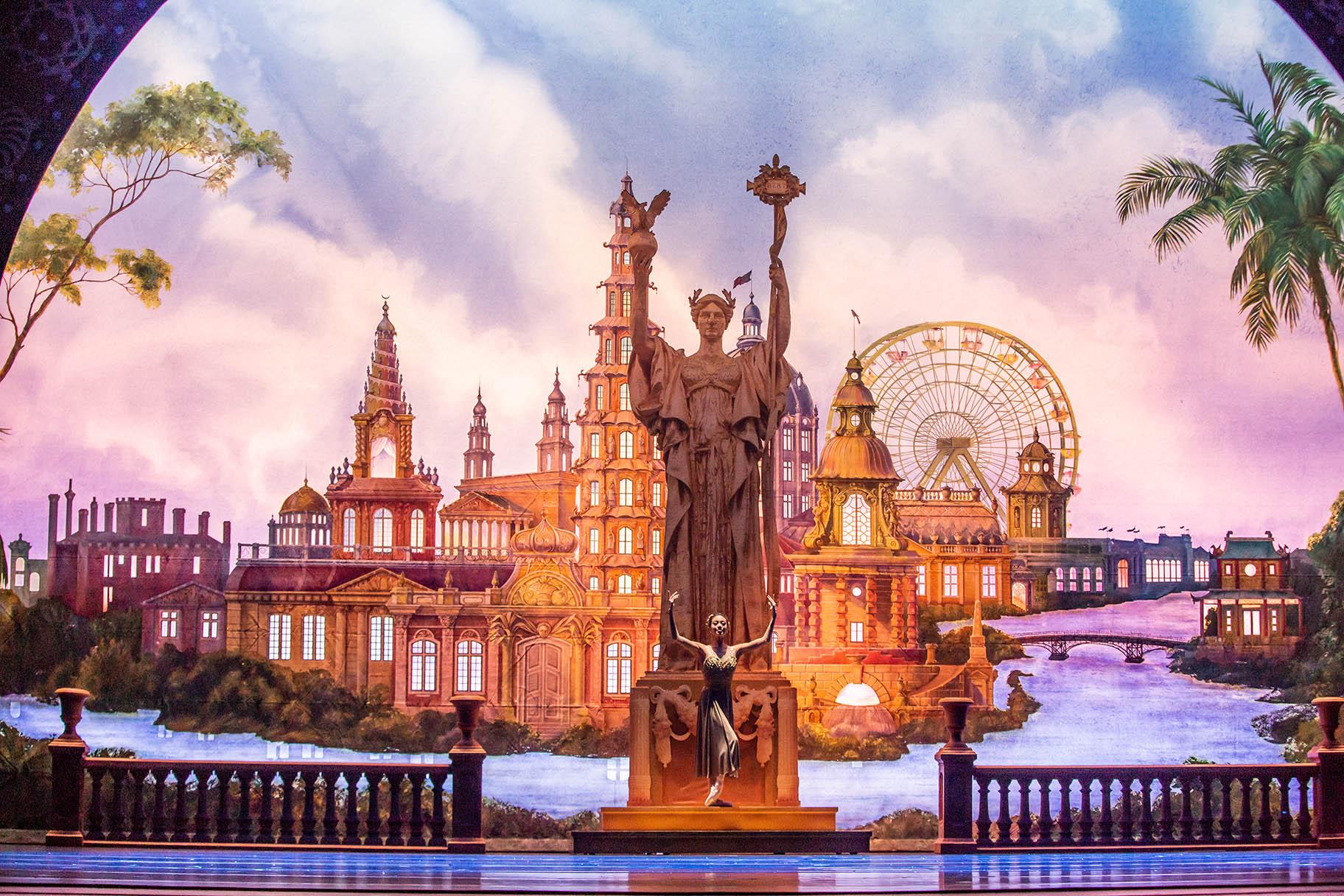 The World’s Columbian Exposition, held in Chicago in 1893 to mark the 400th anniversary of the arrival of Christopher Columbus in the New World, was a transformative event in the history of this city – a spectacular showcase of art, architecture, engineering, commerce and internationalism that suggested Chicago was a powerhouse urban center in the making.

In its own way, the Joffrey Ballet’s highly original reimagining of “The Nutcracker” – which debuted in 2016, and is now in its fourth, monthlong, holiday season run at the Auditorium Theatre – was a transformative event as well. 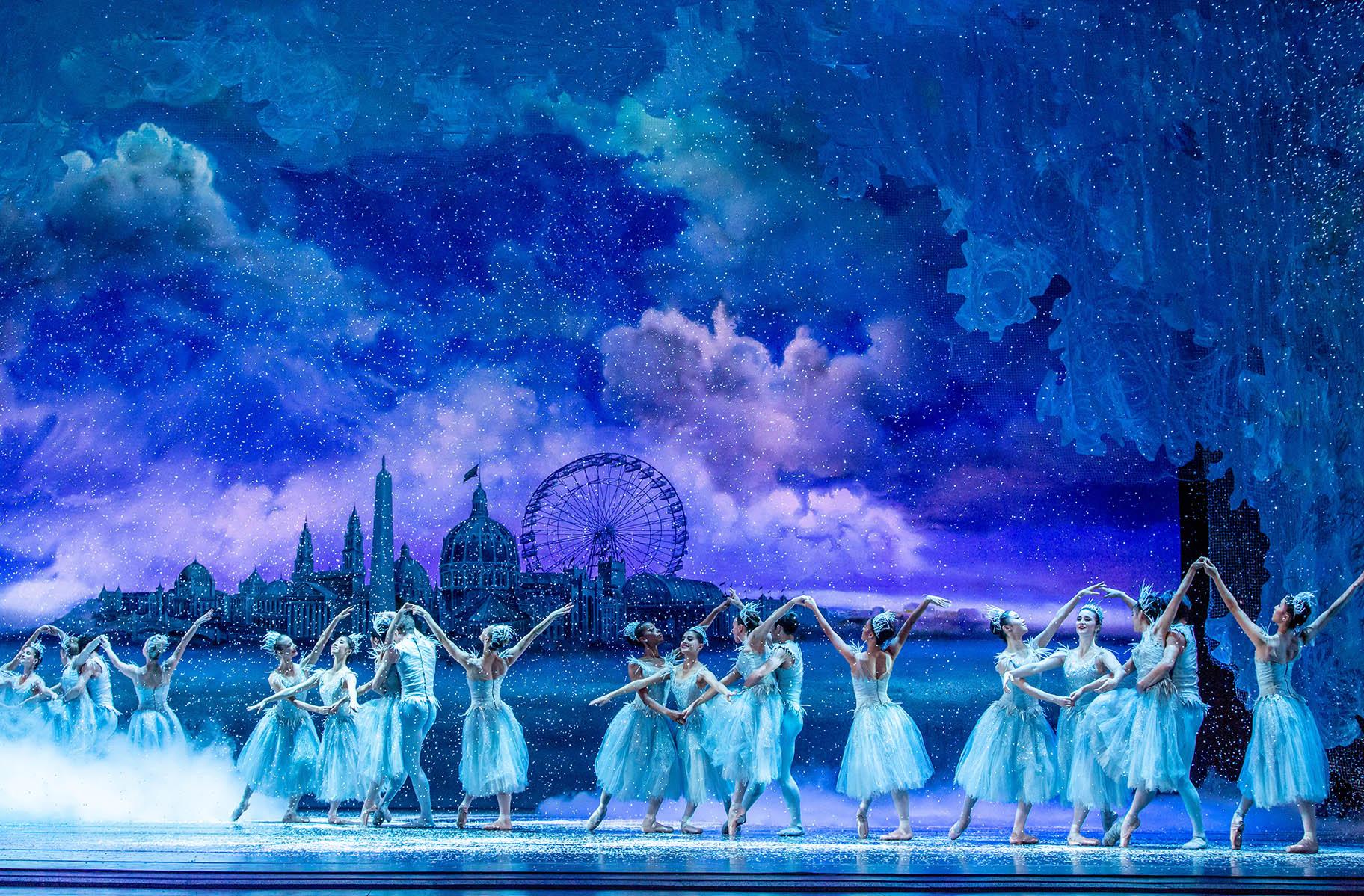 The Joffrey Ballet production of “The Nutcracker.” (Photo by Cheryl Mann)

Choreographed by the Tony Award-winning Christopher Wheeldon, and set to the beloved Tchaikovsky score, it cleverly shifted the story (courtesy of children’s book author Brian Selznick) to the fair’s Chicago construction site during the wintry months of 1892. And rather than focusing on the Christmas celebrations of the usual well-to-do family historically at the ballet’s center (whether set in Europe or, as in the long-lived version by Robert Joffrey and Gerald Arpino, in an upscale Victorian-era New York household), it focused on the community of cash-strapped immigrant artisans and laborers who lived and worked in the shadow of the fair. And what could be more fantasy-inducing than the vision of the world’s first Ferris Wheel, an evocation of Venetian canals, a massive city of whitewashed pavilions, an early network of electric lights, or The Republic, the towering gilded statue that stood as a centerpiece of the fair.

The story also imagined two romances: One a mature one between The Great Impresario of the fair (much like its magic-making architect and urban designer, Daniel Burnham), and Mother (later Queen of the Fair), a widowed Eastern European immigrant sculptress who lives with her teenage daughter, Marie, and young son, Franz, in a shack-like workshop near the fairgrounds; and the other a “first-love” relationship between Marie and the Impresario’s apprentice, Peter. And while Marie’s dream on Christmas Eve still involves an army of rats and mice (endemic to any construction site), and its battle with a brigade of toy soldiers led by a Nutcracker general, the real dream that emerges here is both the unveiling of the fair itself, with all its marvels, and the promise of a rebuilt family born of the union between her Mother and the Impresario. 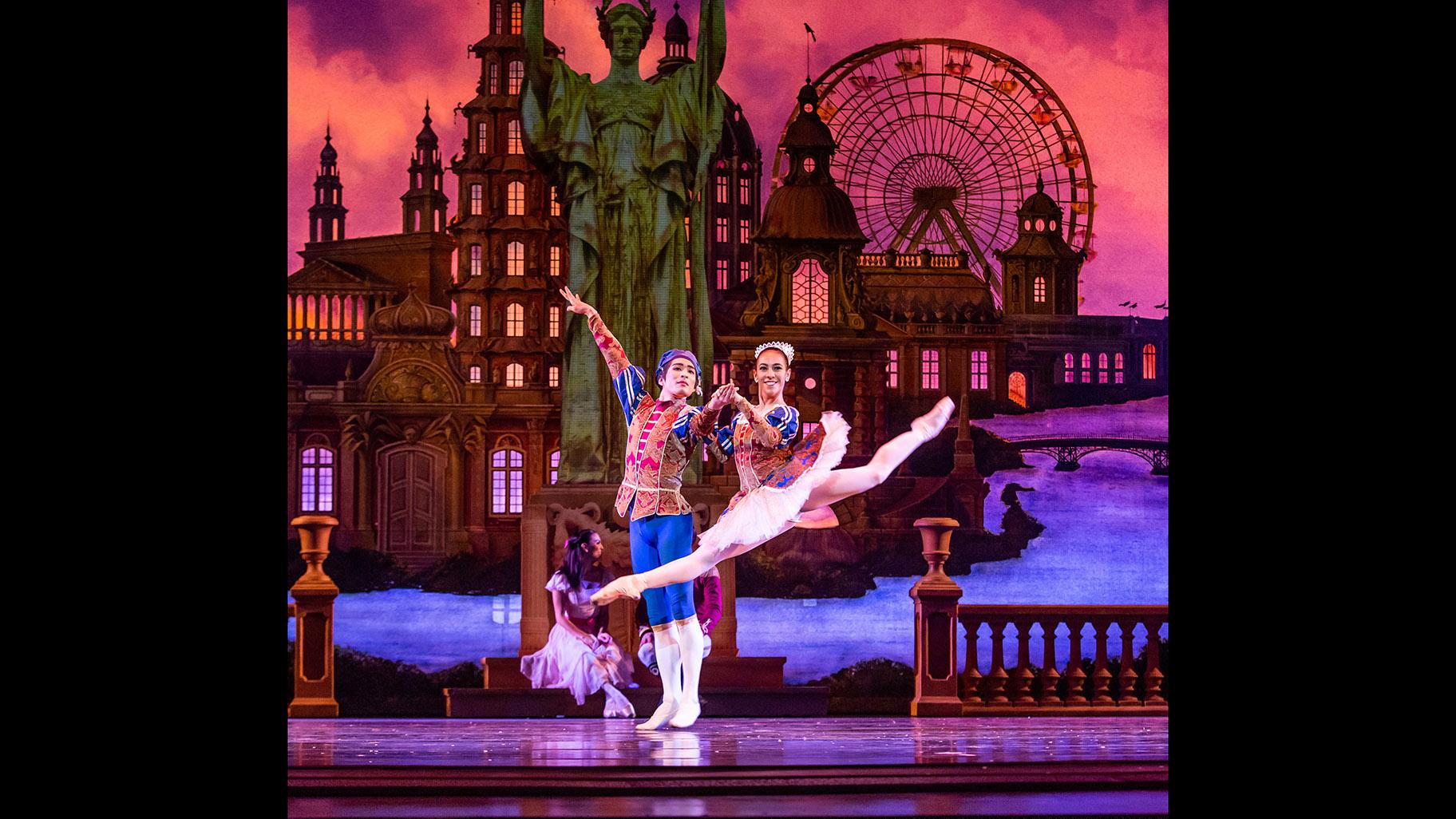 Yoshihisa Arai and Amanda Assucena in the Joffrey Ballet production of “The Nutcracker.” (Photo by Cheryl Mann)

This “Nutcracker” is a monumental production both in its storytelling and its design, yet it manages to beautifully interweave its grand scale elements with human scale emotions. And when it debuted on a notably snowy evening back in 2016 it came with all the weight of enormous expectations and a big price tag attached. Miraculously, that first performance was all but flawless on both an artistic and technological level. But this fourth season turns out to be the charm, with the storytelling and characterizations tighter and clearer, and the dancers more relaxed amidst all the complex projections, puppetry, masks, snow and complex design magic.

Saturday’s opening performance was led by the ever-exquisite Victoria Jaiani (as Mother), and the warm and confident Miguel Angel Blanco (as the Impresario), with a winningly natural mix of mutual respect and attraction between the two dancers who also finessed a difficult culminating pas de deux. The same was true of the richly expressive, technically effortless Amanda Assucena (as Marie), and her fine partner, Alberto Velazquez (as the sweetly devoted Peter). 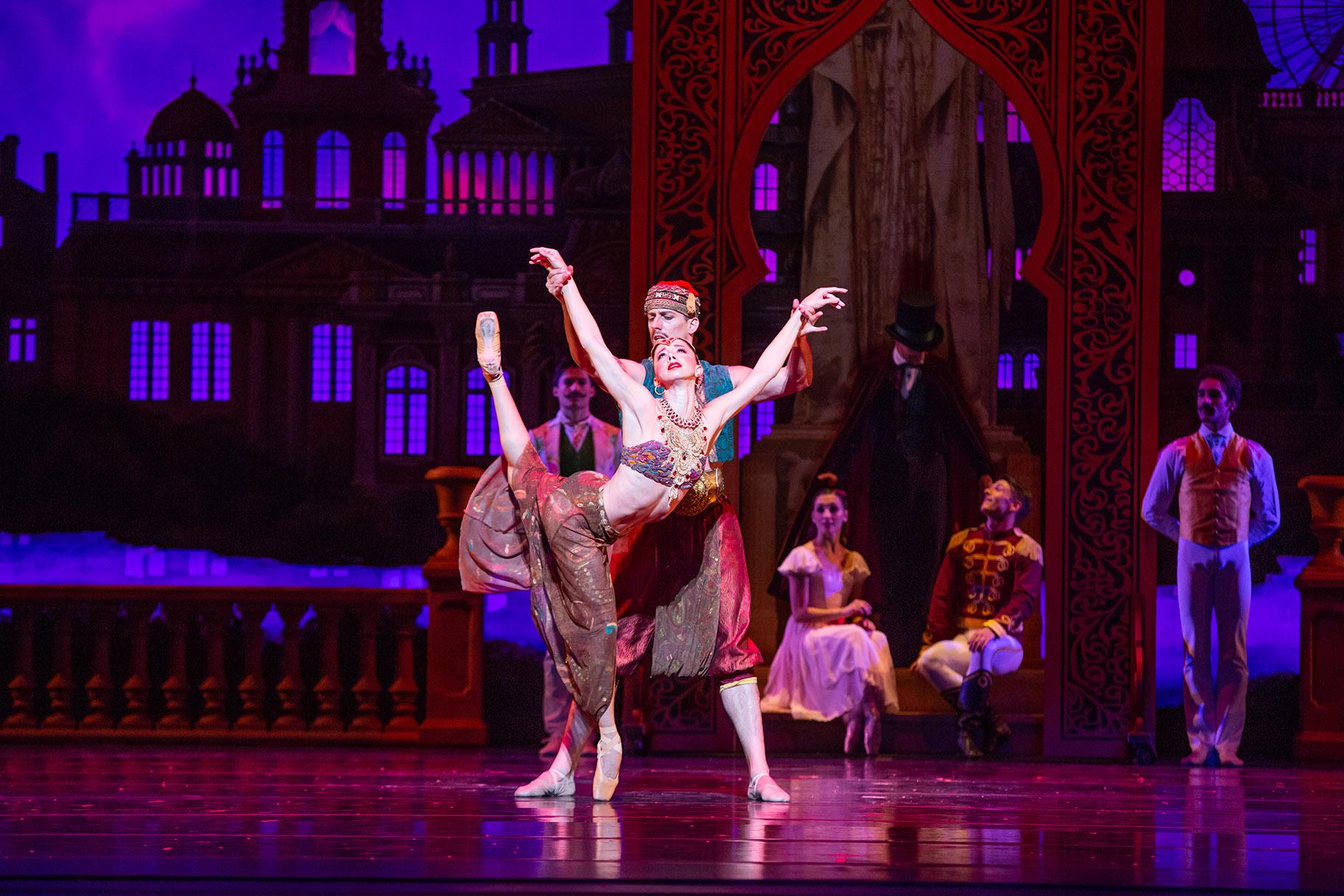 April Daly and Miguel Angel Blanco in the Joffrey Ballet production of “The Nutcracker.” (Photo by Cheryl Mann)

The second act focuses on the international “specialty acts” performed at the World’s Fair, and Christine Rocas and Fabrice Calmels brought down the house (and raised the temperature) as the impossibly seductive acrobatic Arabian Dancers. (Earluer, Calmels portrayed the dastardly Rat Catcher.)

Along with the more than 100 children who (at alternating performances) will play everything from ragamuffins and walnuts to snowflakes, mice and toy soldiers, this year there are two teenage girls (who also alternate) as a guest at Mother’s potluck holiday party and join in a circular folk dance. Both have cerebral palsy, and while the inclusion of a disabled performer was part of the old Joffrey production of “The Nutcracker” (with a boy in a wheelchair blowing on a toy horn), it is worth noting that Emma Lookatch and Larke Johnson are students in the Joffrey Academy’s innovative Adaptive Dance Program. 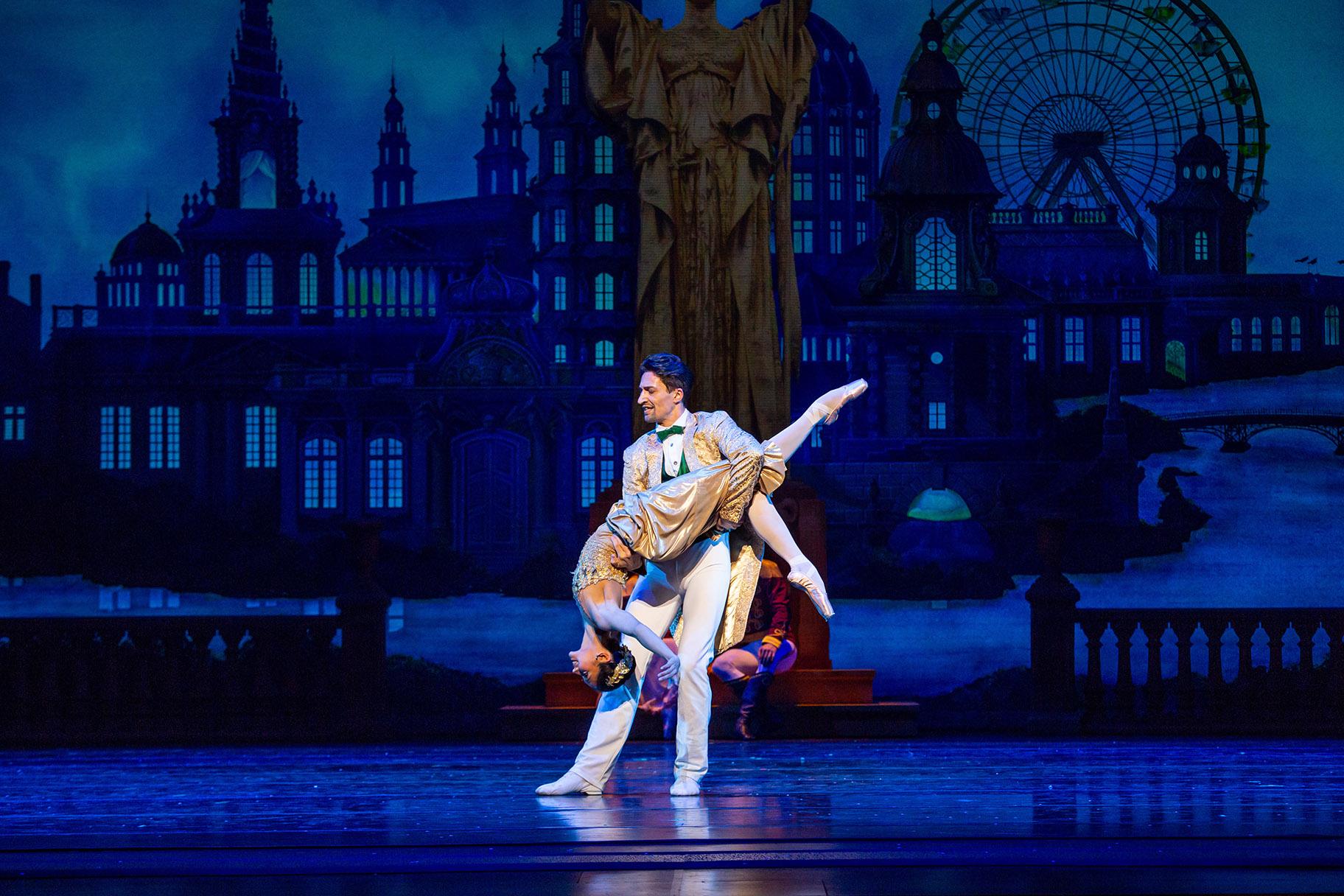 Christine Rocas and Temur Sulashvili in the Joffrey Ballet production of “The Nutcracker.” (Photo by Cheryl Mann)

The Chicago Philharmonic, ideally conducted by the Joffrey’s music director, Scott Speck, not only tapped into the exuberance and dreaminess of Tchaikovsky’s score but, as always, forged an ideal partnership with the dancers.

And then there is the splendiferous visual design of the production – from a massive white marble gondola that floats into view, to a collection of souvenir postcards from the fair, to a laughably pathetic fir tree. At every moment there is something to savor in the work of set and costume designer Julian Crouch, the lighting of Natasha Katz, the puppets of Basil Twist and the projection design by 59 Productions.

But there is something especially wondrous about that golden moment when the proscenium of the Auditorium Theatre (a building completed just a few years before the fair itself), is dazzlingly replicated in the form of a giant projection. The Joffrey will be making its home at the Lyric Opera House beginning in the fall of 2020, so this marks the last time this “Nutcracker” will be performed on the stage for which it was so thrillingly devised. I can only imagine the emotional impact of that moment when, next year, that iconic Auditorium proscenium is projected onto the walls of a different theater.

Note: The depth of talent in the Joffrey company can be found in the fact that six different casts will alternate in a slew of leading roles throughout the monthlong run of “The Nutcracker.” At upcoming performances, the Great Impresario and the Mother/Queen of the Fair will be danced by Temur Suluashvili and Christine Rocas, Fabrice Calmels and April Daly, Edson Barbosa and Amanda Assucena, Dylan Gutierrez and Jeraldine Mendoza, and Greig Matthews and Anais Bueno, as well as by Blanco and Jaiani. And nearly every dancer in the company will move in and out of multiple supporting roles. 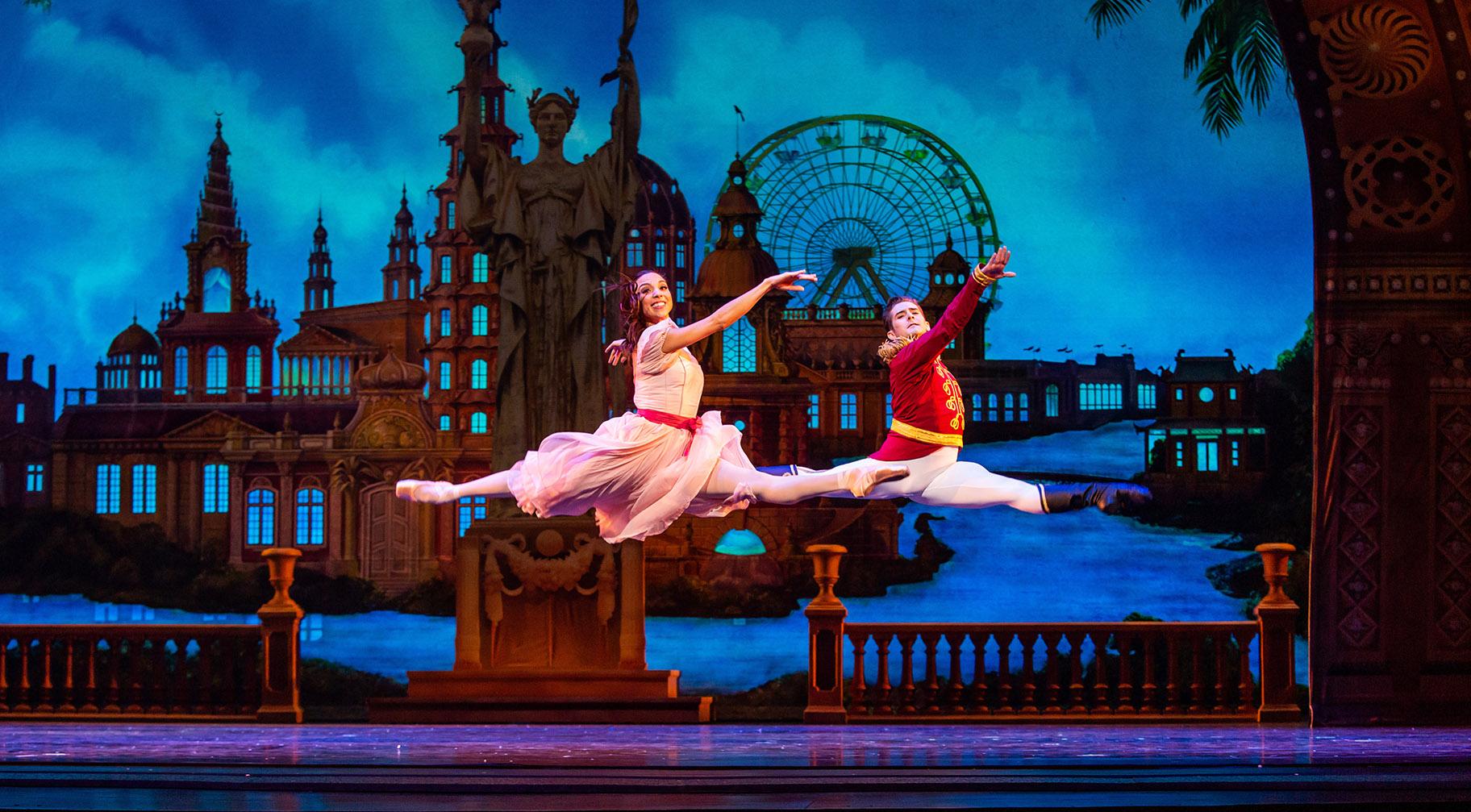 Anais Bueno and Greig Matthews in the Joffrey Ballet production of “The Nutcracker.” (Photo by Cheryl Mann)

Also of note: This season’s opening performance of “The Nutcracker” was dedicated to Christine Du Boulay, the British-born dancer who spent decades as a teacher in Chicago and was a longtime beloved friend of the Joffrey Ballet. She died Nov. 9 at the age of 96.

And one last thing: As always, the “Nutcracker” audience was full of kids, yet there was not a single crying jag or disturbance of any kind to be heard. That, all by itself, suggests the captivating nature of this production.

Note: An earlier version of this story incorrectly stated the number of seasons in which this show has been performed. The story has been corrected.