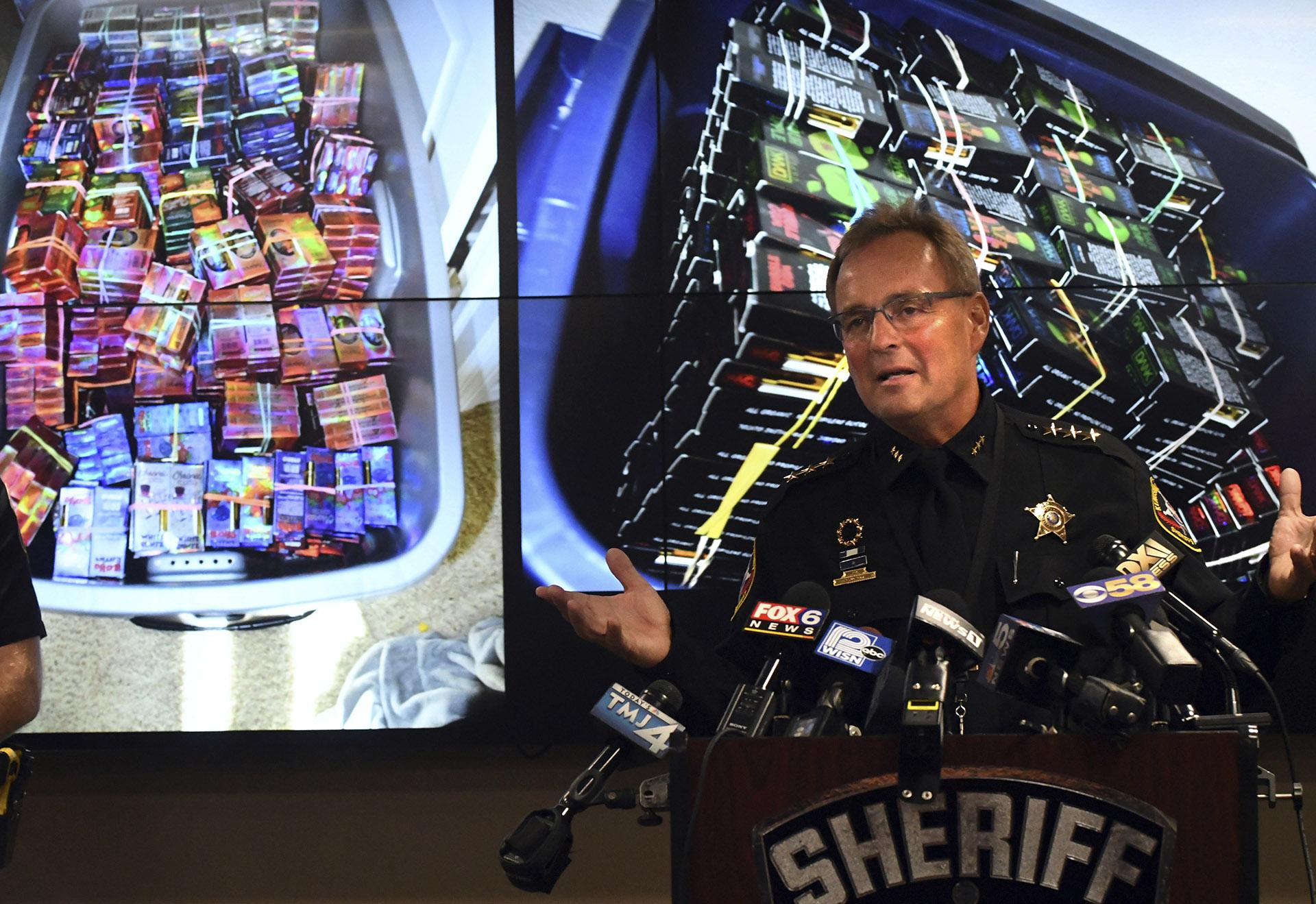 Kenosha County Sheriff David Beth talks about the THC-infused vaping cartridges that were part of a large-scale marijuana operation during a news conference in Kenosha Wednesday, Sept. 11, 2019. (Paul Williams / The Kenosha News via AP)

MILWAUKEE (AP) — A Wisconsin operation that manufactured thousands of vaping cartridges a day may have been packing them with far more THC oil than the packaging claimed, authorities said Wednesday.

The revelation Wednesday from the Kenosha County Sheriff’s Office underscores warnings that people who buy vaping products on the street don’t know what they’re getting. Officials are investigating 450 possible cases in 33 states where vaping was linked to a severe lung disease. The outbreak has killed as many as six people nationwide, including one resident of Illinois.

Authorities haven’t established a link between the Wisconsin operation and any illnesses, but Sheriff David Beth said his office is working with agencies in states where people have gotten sick or died “to see if our people here in Kenosha County have any responsibility in hurting the hundreds of people throughout the United States, especially in Wisconsin.”

People with the illness tied to vaping experienced symptoms including a cough, chest pain, shortness of breath, fatigue and vomiting.

Beth said the Wisconsin operation was filling cartridges with syringes from jars labeled as containing THC oil, injecting 1,000 milligrams — or 1 gram — into cartridges labeled as containing just 5 milligrams of THC oil. Wisconsin authorities are currently testing the contents of the 57 mason jars labeled as THC oil, which came from California, where recreational marijuana is legal. Investigators said they’re trying to determine who made it and how it got to Wisconsin, which hasn’t legalized marijuana.

Last week, police arrested the man suspected of running the operation, 20-year-old Tyler Huffhines, after parents in another county, Waukesha, alerted authorities about cartridges their teenage son had. Huffhines hasn’t been charged yet, but he’s being held on a $500,000 cash bond. Beth said he faces charges for allegedly manufacturing and distributing marijuana and maintaining a drug house. Huffhines is due in court Friday.

As for the illnesses linked to vaping, federal authorities are investigating, but no single device, ingredient or additive has been identified as the main culprit. Most of the patients said they vaped products containing THC, the high-producing ingredient in marijuana. Some said they vaped only nicotine, though, while others said they vaped both THC and nicotine.

After testing products, New York has focused its investigation on vitamin E acetate, which recently has been used as a thickener, particularly in black market vape cartridges. Suppliers say it dilutes vape oils without making them look watery. Vitamin E is safe as a vitamin pill or to use on the skin, but inhaling oily vitamin E droplets into the lungs can trigger pneumonia.

Authorities have described Wisconsin’s case as a sophisticated operation, with Huffhines allegedly employing 10 people to fill and package the products in a rented condo that even had a small assembly line. At the condo, authorities seized more than 31,200 cartridges that were filled and ready to sell. There were another 99,000 unfilled cartridges.

It’s still unknown whether the cartridges were sold out of state. They were being sold for $16.

“This was going on under our nose and I’m glad we caught it. If this one is out there, there’s other ones out there,” Beth speculated.