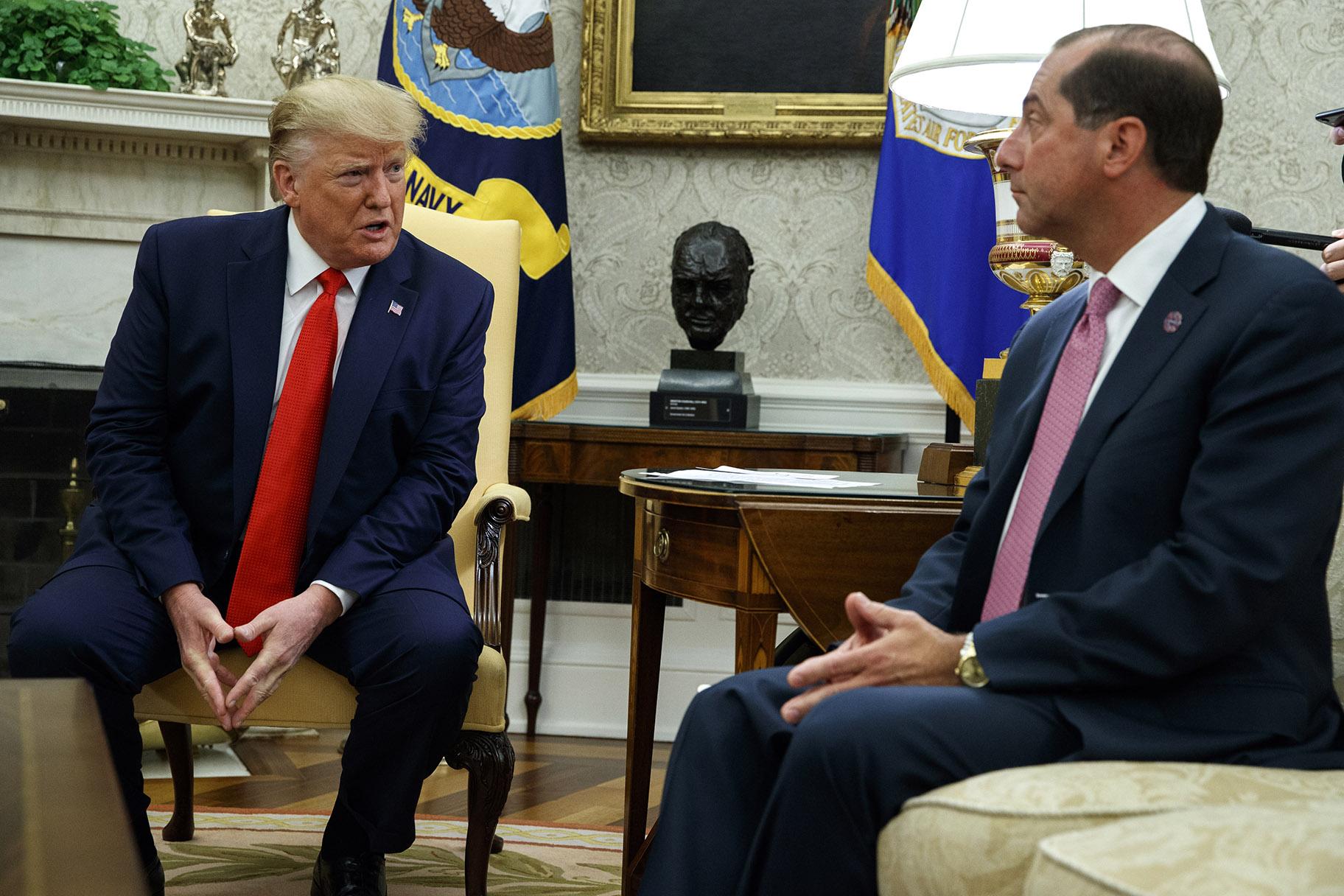 President Donald Trump talks to Secretary of Health and Human Services Alex Azar about a plan to ban most flavored e-cigarettes, in the Oval Office of the White House, Wednesday, Sept. 11, 2019, in Washington. (AP Photo / Evan Vucci)

The Food and Drug Administration will develop guidelines to remove from the market all e-cigarette flavors except tobacco, Health and Human Services Secretary Alex Azar told reporters during an Oval Office appearance with the president, first lady Melania Trump and the acting FDA commissioner, Ned Sharpless.

Trump said vaping has become such a problem that he wants parents to be aware of what’s happening. “People are going to watch what we’re saying and parents are going to be a lot tougher with respect to their children,” he said.

Melania Trump recently tweeted her concerns over the combination of children and vaping.

It will take several weeks to develop the proposed flavor restrictions, which will be subject to public input before taking effect.

Trump’s first public comments on vaping come as health authorities investigate hundreds of breathing illnesses reported in people who have used e-cigarettes and other vaping devices.

No single device, ingredient or additive has been identified, though many cases involve marijuana vaping devices.

The proposal announced by Trump officials would only apply to nicotine vaping products, which are regulated by the FDA.

The FDA has had the authority to ban vaping flavors since 2016, but has previously resisted calls to take that step. Agency officials instead said they were studying if flavors could help smokers quit traditional cigarettes.

But parents, politicians and health advocates have increasingly called for a crackdown on flavors, arguing that they are overwhelmingly to blame for a recent surge in underage vaping by U.S. teens.

“We simply have to remove these attractive flavored products from the marketplace until they can secure FDA approval, if they can,” Azar said.

Azar said flavored products could apply for FDA permission to reenter the market. But under agency standards, only products that represent a net benefit to the nation’s public health can win FDA clearance.

Azar said the administration would allow tobacco-flavored e-cigarettes to remain available as an option for adult smokers. But he said that if children begin using those products, “we will take enforcement action there also.”

A 2009 law banned all flavors from traditional cigarettes except menthol. But that law did not apply to e-cigarettes, which were then a tiny segment of the tobacco market.

A ban on flavors would represent a huge blow to the vaping industry, including companies such as Juul, which has grown into a multibillion-dollar business by selling mint, fruit and dessert flavored-nicotine products.

Juul and other vaping companies argue that their products are intended to help adult smokers wean themselves off traditional paper-and-tobacco cigarettes. But there is little evidence that e-cigarettes are effective for helping smokers quit.

Federal law prohibits e-cigarette and all other tobacco sales to those under 18. But last year, 1 in 5 high school students reported vaping in the past month, according to government survey figures. Government health officials have called the trend an “epidemic,” and new statistics due out this fall are expected to show the problem worsening.

More than 80% of underage teens who use e-cigarettes say they picked the product because it “comes in flavors that I like,” according to government surveys.

A few local governments, including San Francisco, have passed bans on flavored tobacco. And this month Michigan moved to become the first state to ban flavored electronic cigarettes. But other proposed flavor bans have stalled in state legislatures this year, often facing opposition from vaping lobbyists.

E-cigarettes have been on the U.S. market for more than a decade. FDA officials have repeatedly delayed enforcing regulations on them, responding to industry complaints that it would wipe out thousands of small vaping companies.

Most experts agree the aerosol from e-cigarettes is less harmful than cigarette smoke since it doesn’t contain most of the cancer-causing byproducts of burning tobacco. E-cigarettes generally heat liquid containing nicotine. But there is virtually no research on the long-term effects of vaping.