On Tuesday, Chicago Public Schools filed suit against the state of Illinois alleging that the school funding system is racially discriminatory.

CPS chief Forrest Claypool on Wednesday laid out the basis for the lawsuit on Chicago Tonight.

“Our students are 20 percent of the students in the state. We receive 15 percent of all education revenue from the state – the difference is $500 million a year which is enough to protect our classrooms and to meet our obligations to fund teacher pensions, but that is not right now what we are receiving,” said Claypool.

CPS claims the state spends about 25 percent less to educate Chicago students than for other students across Illinois and that it also has an unfair pension burden because it is the only district in the state required to fund its own pension payments.

“Bruce Rauner and the state of Illinois are responsible for an insidious system of racial discrimination which will affect the futures of our children because they receive less than white children in the rest of Illinois,” said Claypool.

Chicago Teachers Union leader Karen Lewis has made it clear that she is unimpressed with the lawsuit which she has characterized as a “fake fight” between Mayor Rahm Emanuel and Republican Gov. Bruce Rauner.

The CTU has also come out against the leadership of Claypool, calling for his resignation after passing a vote of no confidence in him earlier this month.

Speaking to WGN Radio on Wednesday, Lewis questioned why CPS did not ask the union to be a party to the suit.

“We’ve been saying this for how long and now (CPS) just discovered there’s discrimination in the way funding is done in Illinois,” said Lewis. “Primarily it’s because of the fact that we rely so heavily on property taxes to fund education. … You’re going to have constant difference and constant inequality built into the system and that’s all highly racialized because Chicago is a highly segregated city.”

According to Claypool, the union has taken the position that Chicago taxpayers should be paying more to fund schools rather than going after more money from Springfield.

“Karen Lewis is letting Bruce Rauner off the hook when she says things like that,” said Claypool, who also rejected Lewis’s assertion that the lawsuit was a “fake fight.”

“I don’t think there’s anything fake about our children, black and brown, poor, getting $500 million less than their representation in state enrollment,” said Claypool. “I would love to have the teachers in that fight but the leadership of CTU thinks it’s fake.”

Lewis told WGN that for her, the issue is trust or rather a lack of it.

“I don’t trust him (Claypool). I don’t trust CPS,” said Lewis. “I think there are ways that we can work together but it’s not going to be easy because there is no trust there.” 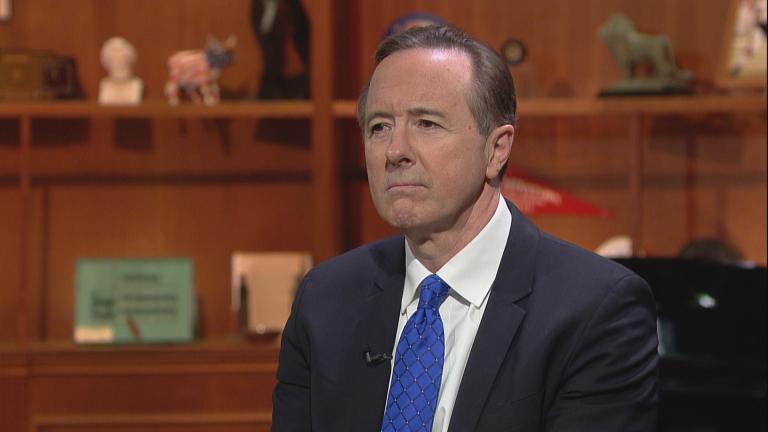 Feb. 15: On Tuesday, Chicago Public Schools and five families of students filed a civil rights lawsuit against the state of Illinois. CPS CEO Forrest Claypool joins us to discuss the suit and the huge budget shortfall facing the district.