CPS CEO Janice Jackson to Step Away From School District

Video: CPS CEO Janice Jackson talks with “Chicago Tonight” about her decision to step down. (Produced by Marissa Nelson)

Chicago Public Schools CEO Janice Jackson announced Monday she will be leaving her post this summer, more than three years after she was tapped to lead the nation’s third-largest school district.

Jackson made the surprise announcement Monday during a press conference at City Hall with Mayor Lori Lightfoot, saying she plans to walk away from the district when her contract expires on June 30.

“I’ve given my all to our students and in return I’ve received far more,” she said. “It is with a full heart and a grateful heart that I am announcing that I have chosen not to renew my contract which expires at the end of June. This job has been everything I’d dreamt of and sometimes a little bit more than that.”

Jackson’s departure comes after she led the school district through an unprecedented move to remote learning during the COVID-19 pandemic. Her tenure also saw the first labor stoppage in seven years when the Chicago Teachers Union went on strike in the fall of 2019.

The announcement comes weeks after the district’s second highest-ranking official, LaTanya McDade, said she would be leaving at the end of this school year to lead the Prince William County Public Schools in Virginia. City sources confirm CPS Chief Operating Officer Arnie Rivera will also be leaving the district.

Mayor Lori Lightfoot on Monday said the city has retained a “top notch” search firm to begin looking for a new CEO. She acknowledged that understanding the ins-and-outs of CPS would “benefit” a potential candidate, but added that she is “confident there’s a lot of talent across the country.”

“Now is the time to turn the page and begin the next leg of our journey,” Lightfoot said, adding that while she’s saddened by Jackson’s upcoming departure, she understands her decision. “Like runners in a relay race, Dr. Jackson has run her leg of the race well and now passes the baton.”

The CTU issued a statement Monday wishing Jackson, McDade and Rivera “the best in their future endeavors,” and called on Lightfoot to include CPS families and school communities as “public and active participants in selecting the incoming CPS CEO.” 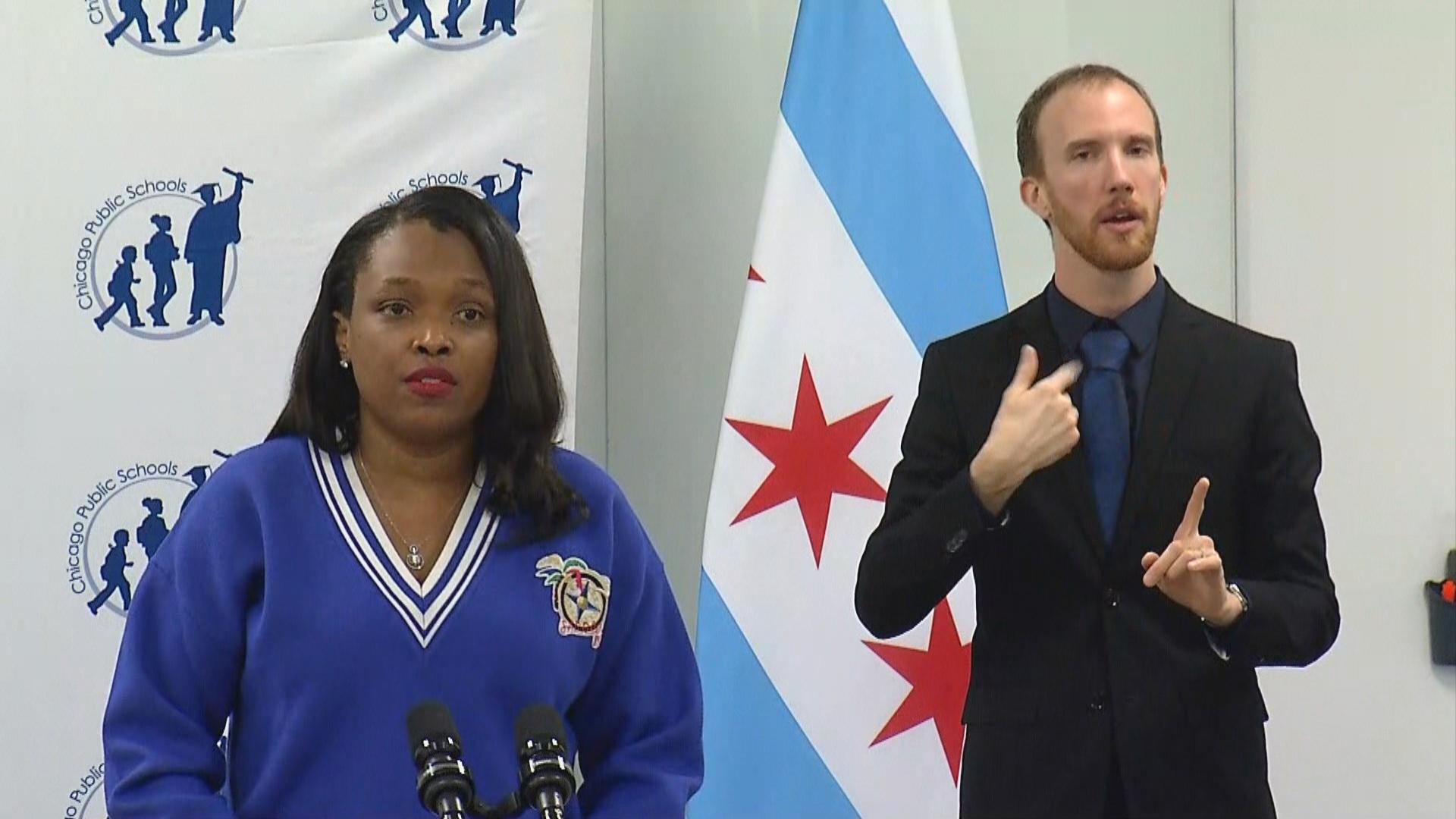 “The next chief executive that Mayor Lori Lightfoot appoints must work with educators to implement the common good standards won in our contract,” the union said in a statement, “and as the city of Chicago awaits its sixth Chicago Public Schools CEO in the last 10 years, we will continue to meet and exceed expectations to enforce our agreements with CPS and return safely to school buildings in the fall.”

Though she’s had a contentious relationship at times with the union, Jackson said she agrees with “almost all” the issues the CTU has raised and advocated for over the years. But she’s “disappointed” in some of the union’s “tactics” and the way politics have taken over the relationship between CPS and CTU.

“I really hope that they give the next person an opportunity to lead into understanding we can make change, we can advocate and get all the things that our schools deserve without making a toxic environment,” Jackson said during an interview with “Chicago Tonight” on Monday, “because our kids are watching and we have an obligation to show them that we can do this right and do it well and do it in a professional manner.”

Jackson was appointed as CEO in January 2018, one month after her predecessor Forrest Claypool resigned following a watchdog report detailing his role in a “full-blown cover-up” during an ethics investigation into the district’s general counsel.

She began her career within CPS in 1999, working as a social studies teacher and debate team coach at South Shore High School. From there, she became principal at Al Raby High School, then moved just a few blocks away to Westinghouse College Prep. After five years there, she entered her first central office position, overseeing 26 schools and more than 14,000 students as district network chief.

Jackson then served as the district’s chief education officer under Claypool until she was named CEO.

Jackson said she began thinking about a potential exit from CPS a couple months ago, and admitted Monday that the pandemic, the 2019 CTU strike and other subsequent near strikes played a role in her decision to walk away.

She acknowledged that in addition to being “proud and humbled,” she’s also “a little tired” and ready to spend more time with her family.

“I have a contract with the district that expires on June 30, I wouldn’t dare walk out of this place a day before that and I’m also not going to walk out of here without making sure that there is a transition,” Jackson said. “But I think at 22 years (working here), and unless I owe CPS a baby, I think it’s time.”

Jackson on Monday reflected on several accomplishments reached under her leadership, including gains in student achievement, “dramatic increases” in graduation rates, college enrollment and completion rates, and the “largest capital investment in CPS history” that she said prioritized communities on the South and West sides of the city.

But her tenure was not free of controversy. Jackson noted that in her first week as CEO, she received a Freedom of Information Act request from the Chicago Tribune that eventually led to their “Betrayed” series, which detailed systemic issues within CPS that allowed hundreds of students to become victims of sexual abuse by district employees over the past decade.

In February 2018, the Board of Education voted to shutter four Englewood neighborhood schools in favor of one new state-of-the-art high school building, a highly contentious decision that drew widespread criticism from students and families in that area.

And last summer, Jackson’s chief of staff Pedro Soto abruptly resigned his position after he was charged in federal court with lying to the FBI.

“When I began this journey, I made a commitment to lead with integrity, courage, and excellence while bringing much needed stability to the district,” Jackson wrote in a letter to staff Monday. “I have delivered on that promise and will continue to advocate for the children of Chicago.”

Jackson has spent much of the last few months organizing a return to the classroom for CPS students who’d been forced to learn remotely for as much as a year during the pandemic.

But those efforts have received pushback from the CTU over various safety concerns, nearly culminating in another teachers strike earlier this year.

In her letter, Jackson said the district’s “collective focus” over the next few months will be on ensuring a “successful and safe reopening of schools full time in the fall.”

“This includes implementing our comprehensive plan to help our schools recover from the pandemic by addressing academic and social and emotional needs and investing in supports that bring transformative change,” she wrote. “It will be a down payment on the bright future and big things to come for CPS.”

One of my earliest memories in life was arriving in a CPS Head Start classroom over 40 years ago. I recall this vividly because I was very saddened by the fact that I could not attend school that day due to registration. However, to my delight, I returned the following day and enjoyed a fun-filled day of learning.  I remember the brightness and excitement in the room as we played and sat in reading circles, listening attentively to our teacher read a story. The fact that one of my earliest memories in life has CPS at the center foreshadowed a lifelong love for our district and undying passion for education. CPS has been an integral part of my life first as a student, most importantly as a parent, and most humbly as the CEO.  It is with that adoration that I have led this great school district as CEO for the past four years.  While I feel there is still more work to be done in CPS, I also believe it is time to pass the torch to new leadership for the next chapter.  Therefore, after careful deliberation, I have made the tough decision not to renew my contract as CEO, which expires on June 30, 2021.

For the past seven years, I’ve served in senior leadership roles in CPS and feel proud of the many accomplishments that have been achieved through the hard work of our students, teachers, counselors, administrators and staff and with the strong, ongoing support of Mayor Lightfoot and our Board. We have accomplished so much together including nationally recognized gains in student achievement, dramatic increases in graduation rates, college enrollment and completion rates, and the expansion of more academic programming across the city including the largest capital investment in CPS history that prioritized communities on the Southside and Westside of Chicago.

With equity at the core of our five-year vision, our incredible team has launched several initiatives that will help us achieve our goal of a high quality educational experience for all children. One of the most fulfilling accomplishments as CEO is creating high quality educational opportunities in communities that have experienced historic disinvestment. The development of an academic program expansion process led to the growth of rigorous programming throughout the city and the creation of Englewood STEM High School and Bronzeville Classical, two high-quality schools that are both on the Southside of Chicago. We did this in partnership with the Community Action Councils and other residents in the community. Those projects demonstrated the power of collaboration and investing in our neighborhoods,  and it is my hope that it will continue with even more vigor in the coming years as many more communities in the city need and deserve more high quality educational options.

My tenure has not been without its adversity. However, from day one, I committed to own and face all of our district’s challenges head on.  I thank each of you who played a role in helping us navigate those challenges by showing up daily with unwavering commitment to Chicago’s children. Despite a disruptive year, CPS is emerging stronger than ever. Fiscally we have made great improvements including increasing school funding equity and making significant investments in schools and students with a focus on underserved communities.

As I close out the next few months in CPS, our collective focus will be on ensuring a successful and safe reopening of schools full time in the fall.  This includes implementing our comprehensive plan to help our schools recover from the pandemic by addressing academic and social and emotional needs and investing in supports that bring transformative change.  It will be a down payment on the bright future and big things to come for CPS.

When I began this journey, I made a commitment to lead with integrity, courage, and excellence while bringing much needed stability to the district. I have delivered on that promise and will continue to advocate for the children of Chicago.  I want to express my sincerest gratitude to Mayor Lightfoot and the residents of Chicago for trusting and supporting my leadership throughout my tenure in CPS.

It has been an honor to serve Chicago’s children.