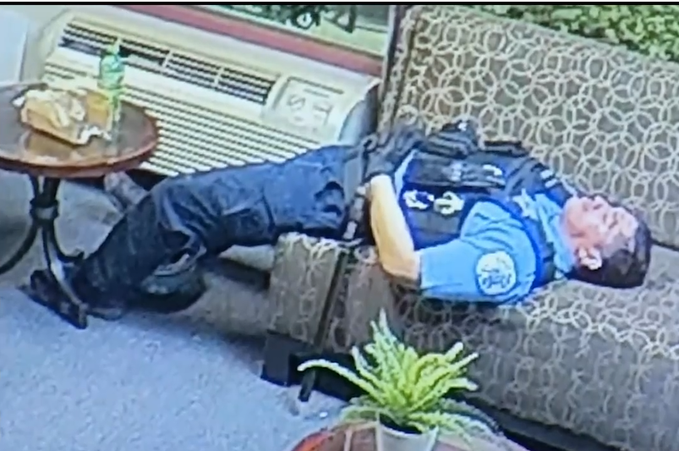 As many as 13 officers lounged, slept and snacked in the burglarized South Side office of U.S. Rep. Bobby Rush in the early morning hours of June 1 as unrest swept the South and West sides of the city, Mayor Lori Lightfoot said Thursday.

The group of officers — which included three supervisors — were captured on video surveillance footage discovered by Rush’s staff, and turned over to the city on Wednesday.

Rush said he was outraged by the conduct of the officers, who have not been officially identified by department officials.

“They even had the unmitigated gall to go and make coffee for themselves and to pop popcorn, my popcorn, in my microwave while looters were tearing apart businesses within their sight and within their reach,” Rush said.

Officers spent between four and five hours in Rush’s campaign office at 54th Street and Wentworth Avenue, according to the video.

The office was burglarized along with several other businesses in the same strip mall before the officers shown in the video arrived, Lightfoot said. Several businesses were destroyed.

“The utter contempt is almost inconceivable,” Lightfoot said, her voice rising with indignation. “Sleeping? On a congressman’s couch? During a riot?”

Lightfoot said the officers involved would face discipline and could face criminal charges. 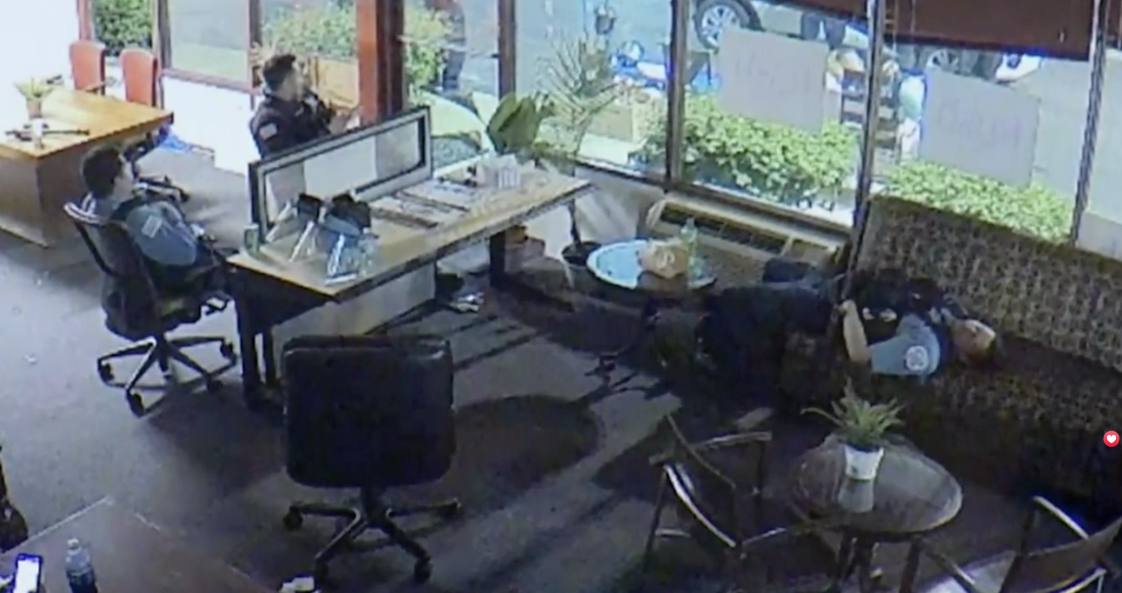 Rush repeatedly thanked the mayor for responding to the video and praised her leadership.

The two had been at odds during the 2019 mayoral campaign, when Rush supported Cook County Board President Toni Preckwinkle over Lightfoot. Rush warned that those who voted for Lightfoot would have “the blood of the next young black man or black woman who is killed by the police” on their hands because of her police policies.

The video showing the officers in Rush’s office was taken about 1 a.m. June 1 as the city faced a second night of widespread violence and looting sparked by the death of George Floyd in the custody of Minneapolis police.

Lightfoot has faced blistering criticism for her decision to use 375 members of the Illinois National Guard to block off the Loop and the central business district starting on the morning of May 31.

That made business corridors on the South and West sides an “easy target” for looters and criminals because they “did not have the same level of protection,” according to the City Council’s Black Caucus.

Lightfoot dismissed that criticism as “illogical and not true.”

In addition to the dozens of businesses that were damaged during the night of May 31 and the early morning hours of June 1, 18 people were killed.

During an online conference call held by the mayor’s office hours before the officers made themselves at home inside Rush’s office at the height of the unrest, Ald. Pat Dowell (3rd Ward) told the mayor she felt helpless to protect her residents and businesses. Rush’s office is in her South Side ward.

“I’ve worked really hard over the last seven years and now I feel like I am five feet back,” Dowell said on the call, which was obtained by WTTW News.

Lightfoot acknowledged the video would be used to bolster that criticism.

“Their conduct will confirm the perception that too many people on the South and the West side were left to fend for themselves, that police don’t care that black and brown communities were looted and burned,” Lightfoot said.

The video represents the latest evidence of misconduct by Chicago police officers during the protests and violence that swept the city.

More than 300 complaints were filed against officers with the Civilian Office of Police Accountability, including one from Chicago Police Board President Ghian Foreman that alleged an officer struck him five times with a baton. Other officers face complaints that they used homophobic slurs, flipped off crowds of peaceful protesters and covered up their names and badge numbers.

Lightfoot and Chicago Police Superintendent David Brown apologized to Rush on behalf of the city and the police department.

The conduct of the officers on the video represents “a personal embarrassment to me,” said Lightfoot, whose voice cracked with emotion several times during the news conference. The mayor also appeared to wipe away tears at times.

“I do have a range of emotions as I stand here; but, mostly, I’m done,” Lightfoot said. “We cannot go on like this anymore.”

Brown said he was most appalled by the presence of supervisors, identifiable by their white-shirted uniforms. That made it clear that officers did not fear discipline from their supervisors, he said.

“If you sleep during a riot, what do you do during a regular shift?” Brown said. “Step up, or step out. I’m not playing.”

Lightfoot vowed to seize the moment to reform the police department by revising the contract with the Fraternal Order of Police and implementing the recommendations of the Police Accountability Task Force, which she led in 2016.

Lightfoot said she had directed her staff to begin drafting legislation that would require officers to be licensed by the state.

“It is time, actually, it is way past time, for this change,” Lightfoot said. “We have a long road, and a hard road, ahead.”