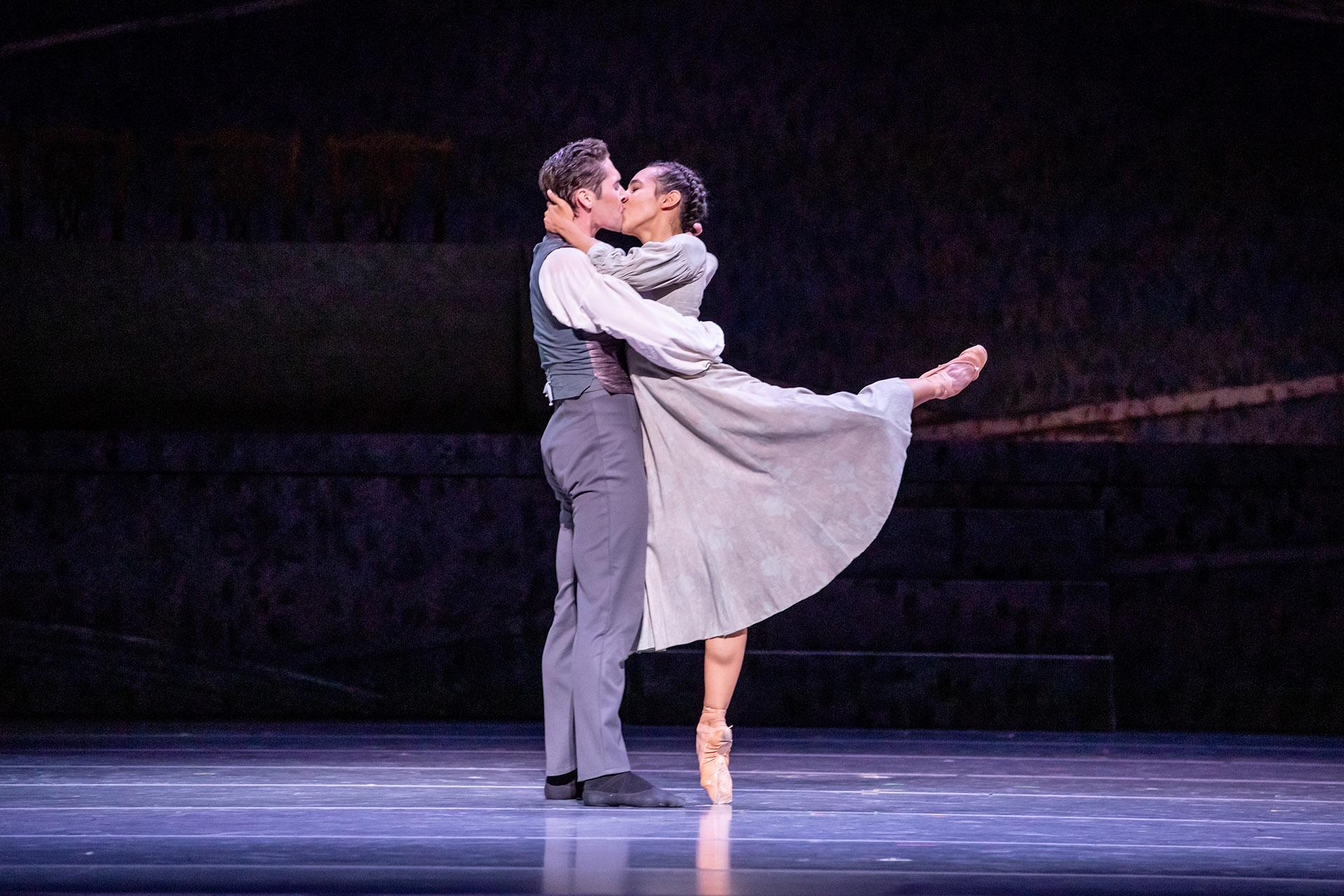 British choreographer Cathy Marston’s enthralling production of “Jane Eyre,” now being performed with stellar artistry and deep emotional insight by the Joffrey Ballet, is no “Masterpiece Theatre”-style rendering of Charlotte Bronte’s classic 1847 novel. Not a single clipped word is spoken as it spins the tale of a woman who endures great suffering before finding her way in life. Yet the ballet is extraordinarily eloquent, impassioned, poetic and psychologically searching. As Martha Graham said, “movement doesn’t lie.” And Marston’s choreography uncannily captures all the pain, passion and cruelty that drive the characters in Bronte’s groundbreaking (and in many ways proto-feminist) tale with surprising, often revelatory power.

Throughout its history, the Joffrey company has displayed a special gift for transcending technique and delving into a ballet’s dramatic qualities. Recent productions of “A Midsummer Night’s Dream” and “Anna Karenina” only proved that point. But the dramatically brilliant dancing in “Jane Eyre” goes one step further as it grabs hold of Marston’s feverish evocation of Eyre’s text, and composer Philip Feeney’s music – a mix of his own timeless yet modern score that is seamlessly interwoven with music by Fanny Mendelssohn (the overlooked sister of Felix, and Bronte’s contemporary), and Franz Schubert. And frankly, in many ways the ballet (which was created for England’s Northern Ballet, had its U.S. premiere earlier this year by the American Ballet Theatre and is now premiering in Chicago) is far more engrossing than the novel itself.

It unfolds as something of a fever dream as Jane (with a sublime performance by Amanda Assucena), envisions her younger self (exquisitely danced by Yumi Kanazawa, who clearly has star quality), and recalls her lonely, abusive childhood as an orphan. Grudgingly taken in by her haughty aunt (played to perfection by April Daly), she is battered and bullied by her spoiled cousins (the excellent Xavier Nunez, Yuka Iwai and Valeria Chaykina), and then sent off to a Dickensian boarding school for orphaned girls (ideally conjured with nothing but wooden stools and slates). Her only friend is Helen Burns (a lovely turn by Brooke Linford), but she soon dies. It is only when she begins to teach the girls that she begins to gain the confidence that will serve her well. 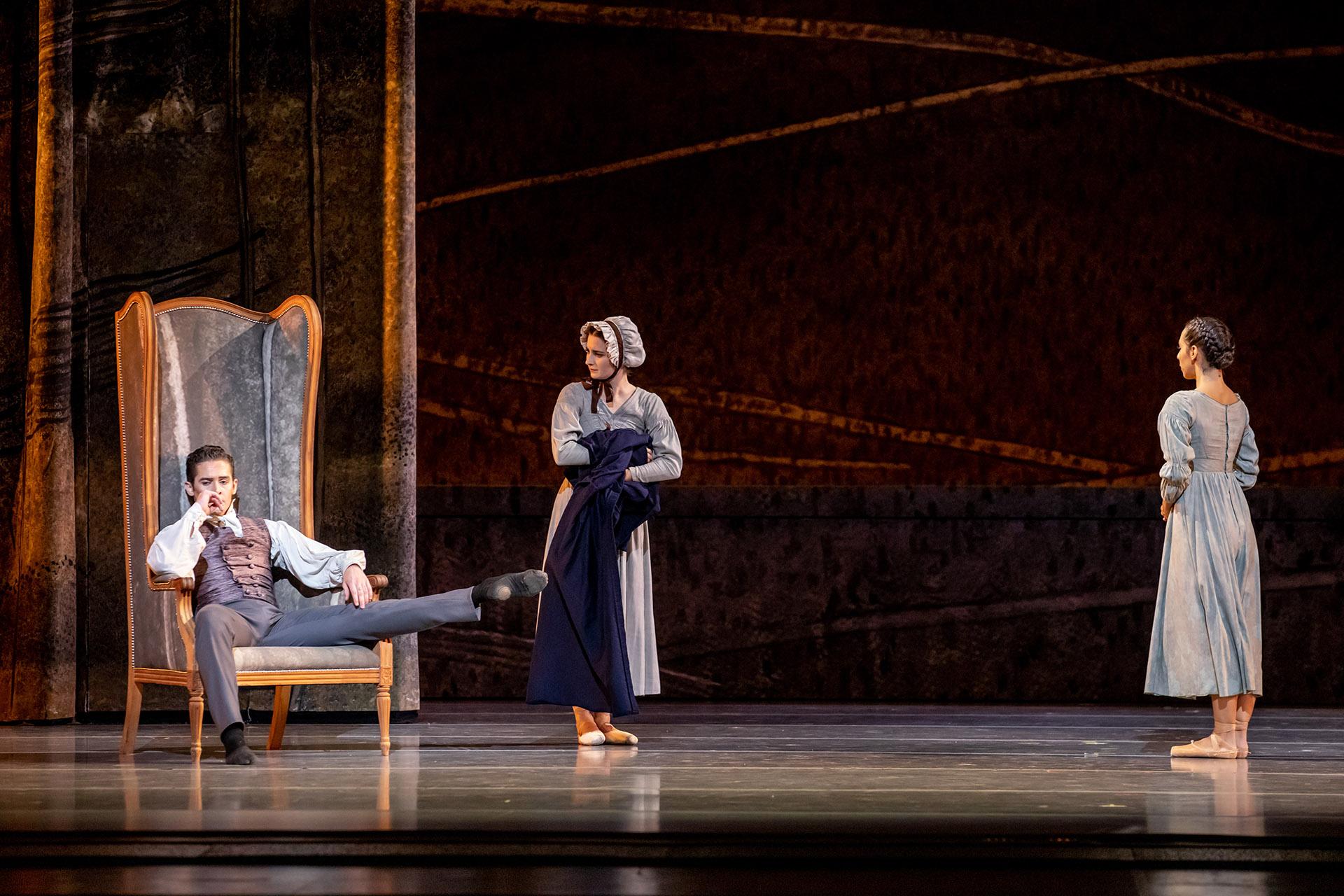 Then comes a life-altering transition as Jane takes the job of governess at the home of Edward Rochester (wonderfully danced and played by Greig Matthews in what is unquestionably a breakthrough performance), the wealthy, worldly, darkly brooding master of Thornfield Hall.

Jane is welcomed by Mr. Rochester’s kind but perpetually nervous housekeeper, Mrs. Fairfax (a spot-on turn by Lucia Connolly). And she is instantly adored by her exuberant little pupil, Adele Varens (an irresistibly playful Cara Marie Gary), who is Rochester’s ward. As for Rochester, who has some very dark secrets hidden in his closet, he is initially quite dismissive of Jane. (In one searing gesture made while seated in a giant armchair, he sharply extends his leg as if to corral her.) But gradually he begins to realize she is a woman with a steely spine. And not only does a certain push-pull chemistry between the two begin to develop, but he also even fends off the insistently seductive moves of the socialite Blanche (beautiful Jeraldine Mendoza), and proposes marriage to Jane instead.

Of course there is no escaping that dark secret: a wife, Bertha Mason (in a riveting, crash-and-burn turn by Christine Rocas), a raging madwoman with suicidal impulses who is kept locked away in an attic room and is cared for by the harried and notably tipsy Grace Poole (an inspired cameo by Dara Holmes). Once that story is revealed, a traumatized Jane runs away into the moors where she is rescued by the Rev. St. John Rivers (the always outstanding Edson Barbosa), who quickly proposes marriage – an offer she instantly rejects, knowing that Rochester is the man who has captured her soul, and that she must return to him.

Bertha’s attempt to burn the house down leaves the madwoman dead and Rochester blind. But Jane is determined to live out her life with him, and the remarkably moving pas de deux that reunites them suggests they are finally clearly “seeing” each other in the most compelling way. 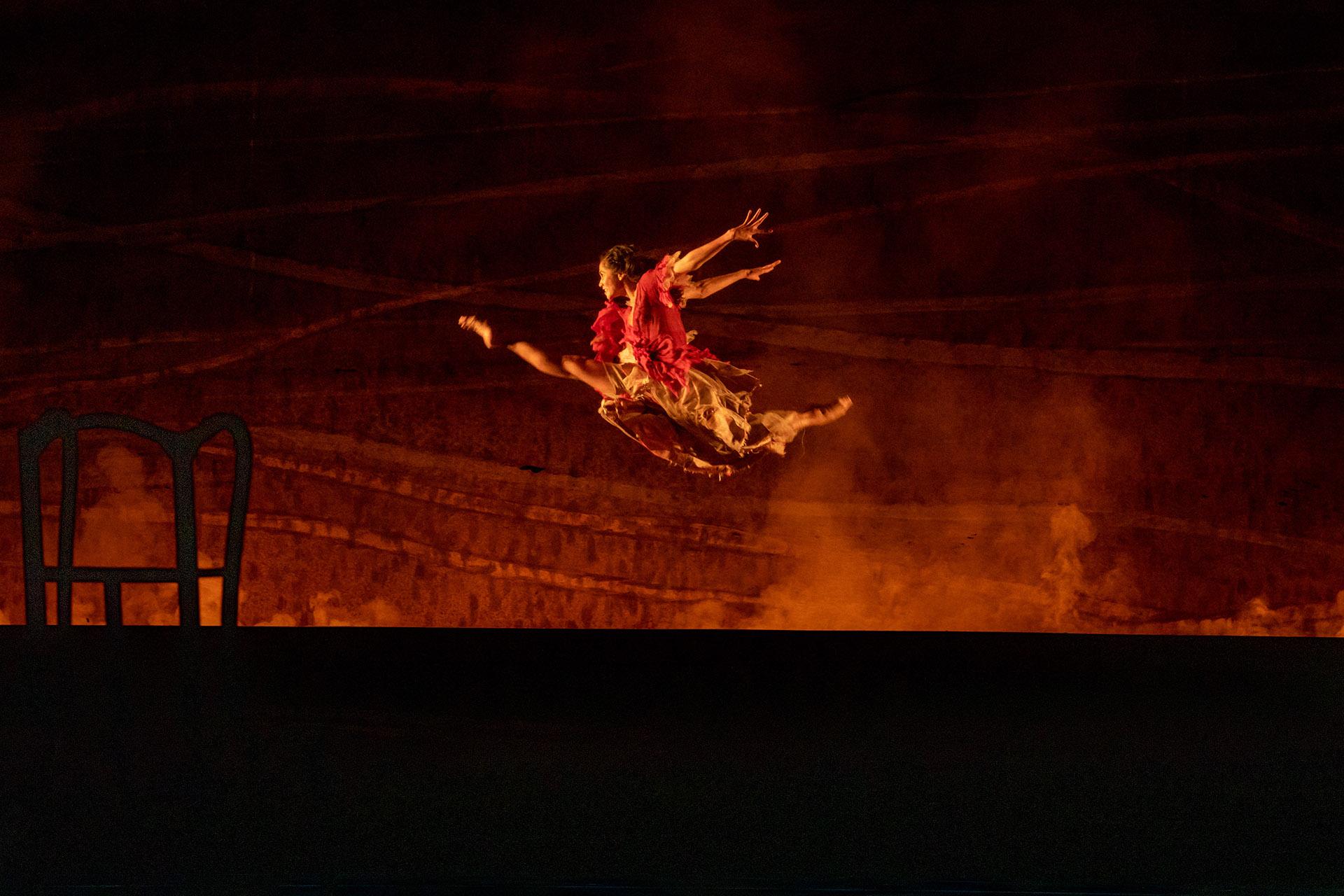 Throughout, Assucena’s dancing is sweeping and flawless, including when she is haunted by memories of being bullied by a group of men in creamy topcoats who torment her and toss her from one to the other with terrifying force until she finally learns to fight back. But it is the easy radiance and complexity of Assucena’s inner life, and the most natural ways in which she embodies Jane’s growth and change and ever-shifting confidence, anguish and confusion, that make the crucial difference. And she and Greig make a most interesting pair.

Marston’s character-defining choreography and dramatic direction give each of the many other dancers in the ballet a highly specific language of movement, and without exception they have become fluent in it, suggesting both the inner psychological landscape and the outer reality. (Note: Three casts will alternate in the leading roles during the ballet’s two-week run, including Victoria Jaiani and Fabrice Calmels, and Anais Buenos and Dylan Gutierrez.)

The sets and costumes by Patrick Kinmonth (who also collaborated with Marston on the ballet’s scenario) are spare but highly effective, with delicately painted curtains to suggest the landscape, and little more than chairs used as defensive weapons and seats of power (or the lack of it). 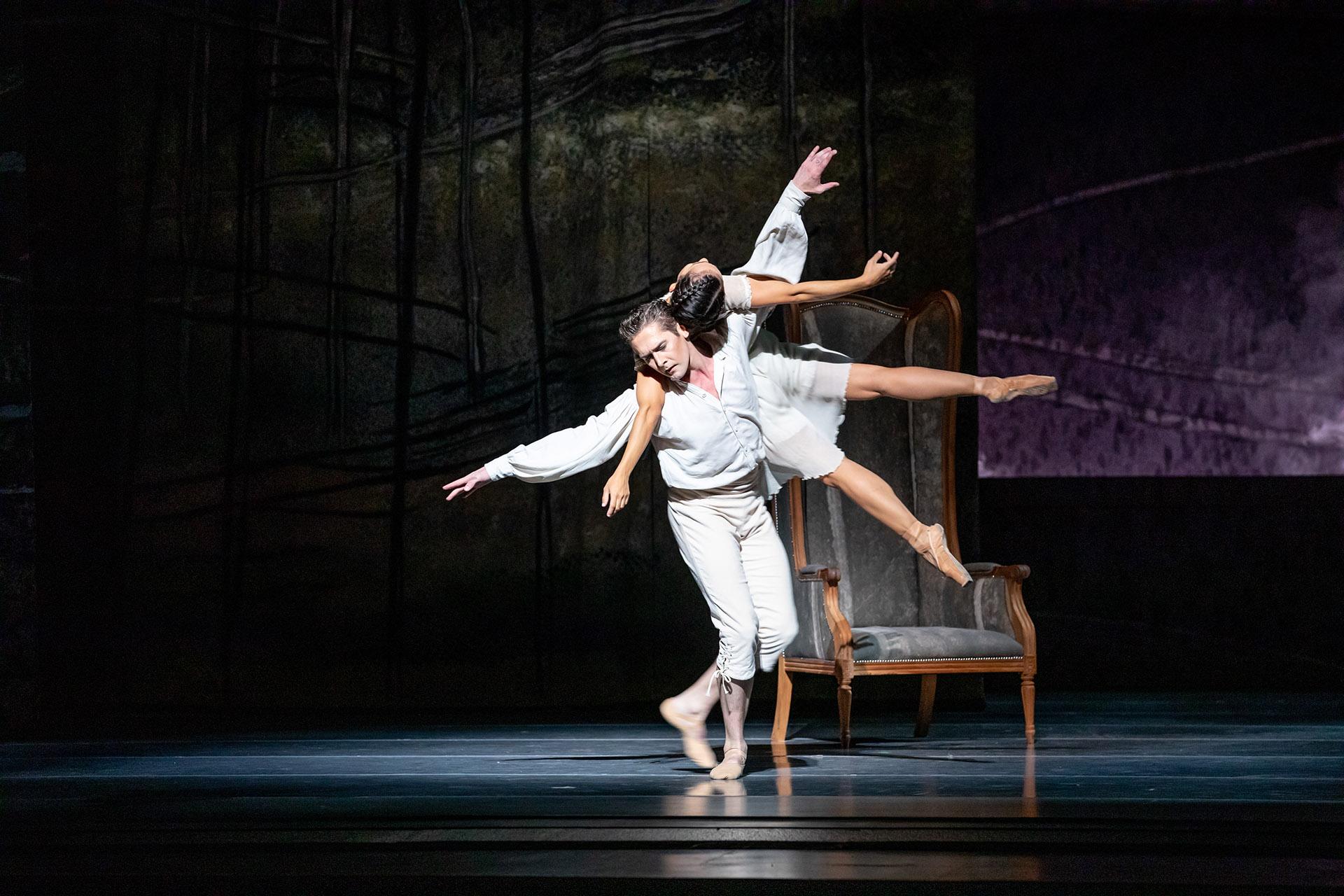 And as always, music director Scott Speck and his impeccable Chicago Philharmonic musicians are essential in bringing the work to vivid life and ideally synchronizing with the dancers.

“Jane Eyre” marks the opening work in Joffrey’s final season at the Auditorium, a theater that has long embraced the company with its golden light. Coming up next is “The Nutcracker,” followed by a winter program featuring a mixed bill of works by Itzik Galili, Stephanie Martinez, Christopher Wheeldon and Justin Peck; and a spring program marking the return of Yuri Possokhov’s “Don Quixote.” Then the company will prepare to move to its new home on the Lyric Opera stage, where I hope it will be able to create the same sense of magic it does at the Auditorium Theatre. Already “unofficially” announced for that first season is a new work by Marston: a one-act ballet inspired by the John Steinbeck classic, “Of Mice and Men.”