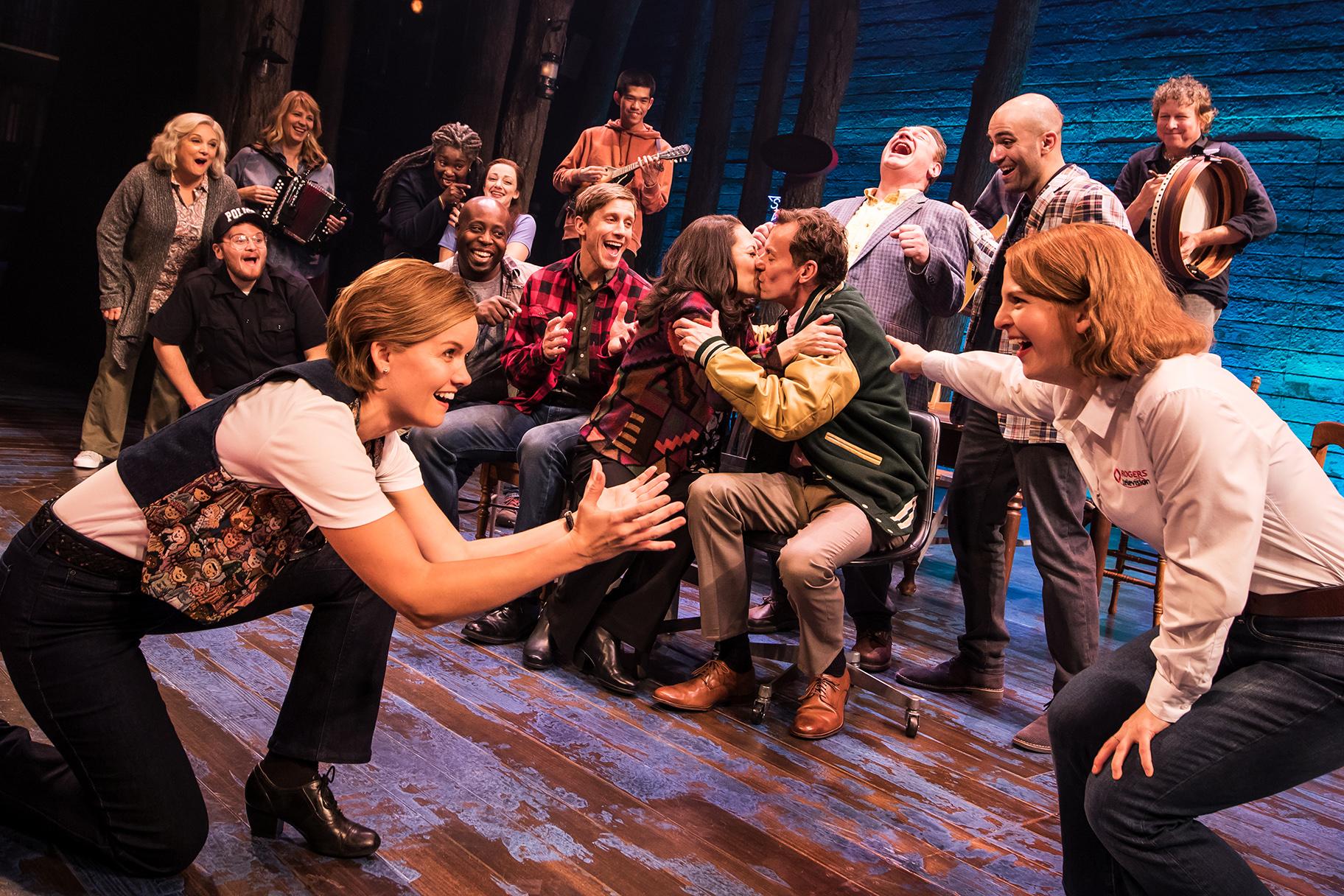 The terrorist attacks that occurred on the morning of Sept. 11, 2001, resulted in the death of nearly 3,000 people, injury to more than 6,000, material damage of more than $10 billion and immeasurable and enduring psychic damage.

Yet with the passage of nearly two decades, it also is worth asking this question: How is 9/11 now perceived by a generation that was too young to comprehend what happened (or was not yet even born) at the time? Is it like ancient history to young audiences?

Those are the questions that came to mind as I watched “Come From Away,” the hit Broadway musical now in a national touring company production at Chicago’s Cadillac Palace Theatre.

The essential truth and beauty of the musical, whose seamless book and score is the work of Canadians Irene Sankoff and David Hein (who also happen to be married to each other), is based on fact and drawn from the stories of real people. And while the show winningly suggests the workings of human nature – for better and for worse – as manifested in an extreme situation (yet at a safe distance from the actual cataclysm), you might find yourself wondering if today’s audiences (and future audiences) will fully understand the monumental and lasting impact of what happened in New York, Washington, D.C. and Pennsylvania on that day.

Or, will they remember it all in terms of the quirky but true human comedy that unfolds in the musical, as travelers on 38 planes headed to the U.S. were ordered to land at the vast airport in Gander, Newfoundland that is located at the easternmost tip of Canada? And will they be too easily beguiled by the remarkable show of life-affirming hospitality shown to the 6,600 strangers who were unexpectedly deplaned there, and who were met by the fewer than 10,000 inhabitants Gander and several other small nearby towns? 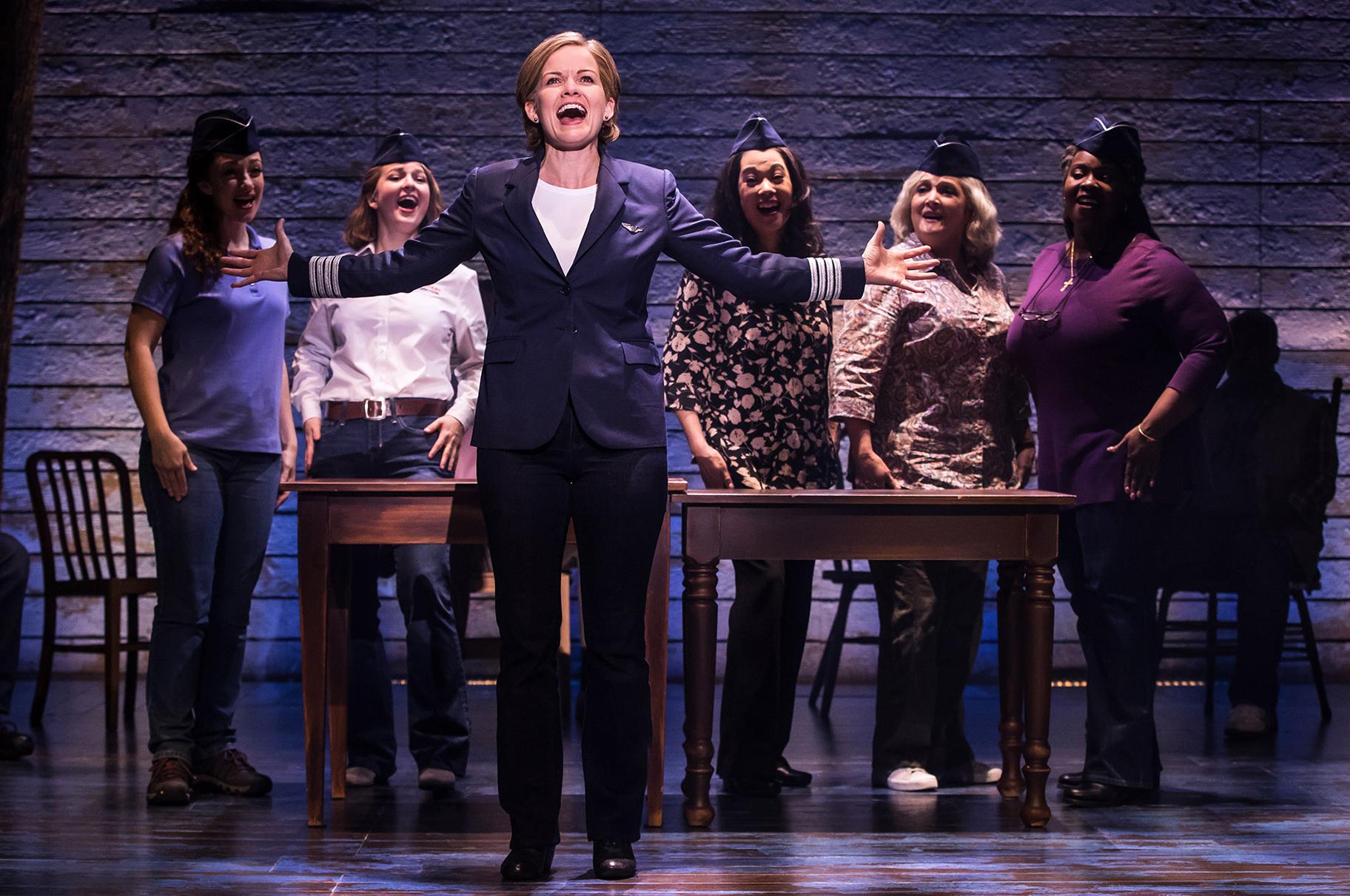 In “Come From Away,” Becky Gulsvig plays Beverley, the pilot who worked long and hard to become the first female captain to fly for American Airlines. (Photo Credit: Matthew Murphy)

Of course these passengers were the lucky ones, even if they did not immediately realize that because they were kept in the dark for quite some time about what was happening in the U.S. And after spending 28 hours in their airplane seats they were just hungry, frustrated and cranky more than frightened.

But all that would begin to change as they were bused off to schools and other shelters and, almost out of thin air, showered with food, clothes, blankets, diapers, medicine and other essential supplies, as well as friendship and moral support. The essential goodness and generosity of the people of Gander served as a rebuke to the evil manifested elsewhere.

Paired with the impressively lean and fluid direction of Christopher Ashley and Kelly Devine’s musical staging is the seamless musical supervision of Ian Eisendrath. His eight onstage musicians play everything from keyboard, accordion, harmonium, Uilleann piles, mandolins and bouzouki to electric guitar and bass, bodhran and other percussion, and they are as at home with Gaelic-infused tunes as with a powerful feminist anthem and a beautiful interweaving of Catholic, Jewish and Muslim prayers.

Designer Beowulf Boritt’s set is minimalist but evocative – a brick wall painted to suggest a cloud-strewn blue sky, framed by tall, leafless trees that could be metaphors for Manhattan’s steel-and-glass towers.

And then there is the 12-person cast that easily morphs in and out of a great array of characters, from stranded travelers from many different countries (not all English-speaking), to the eccentric Ganderites. And together they generate both unexpected laughter and pathos, acknowledging they have now all found themselves “Somewhere in the Middle of Nowhere.” 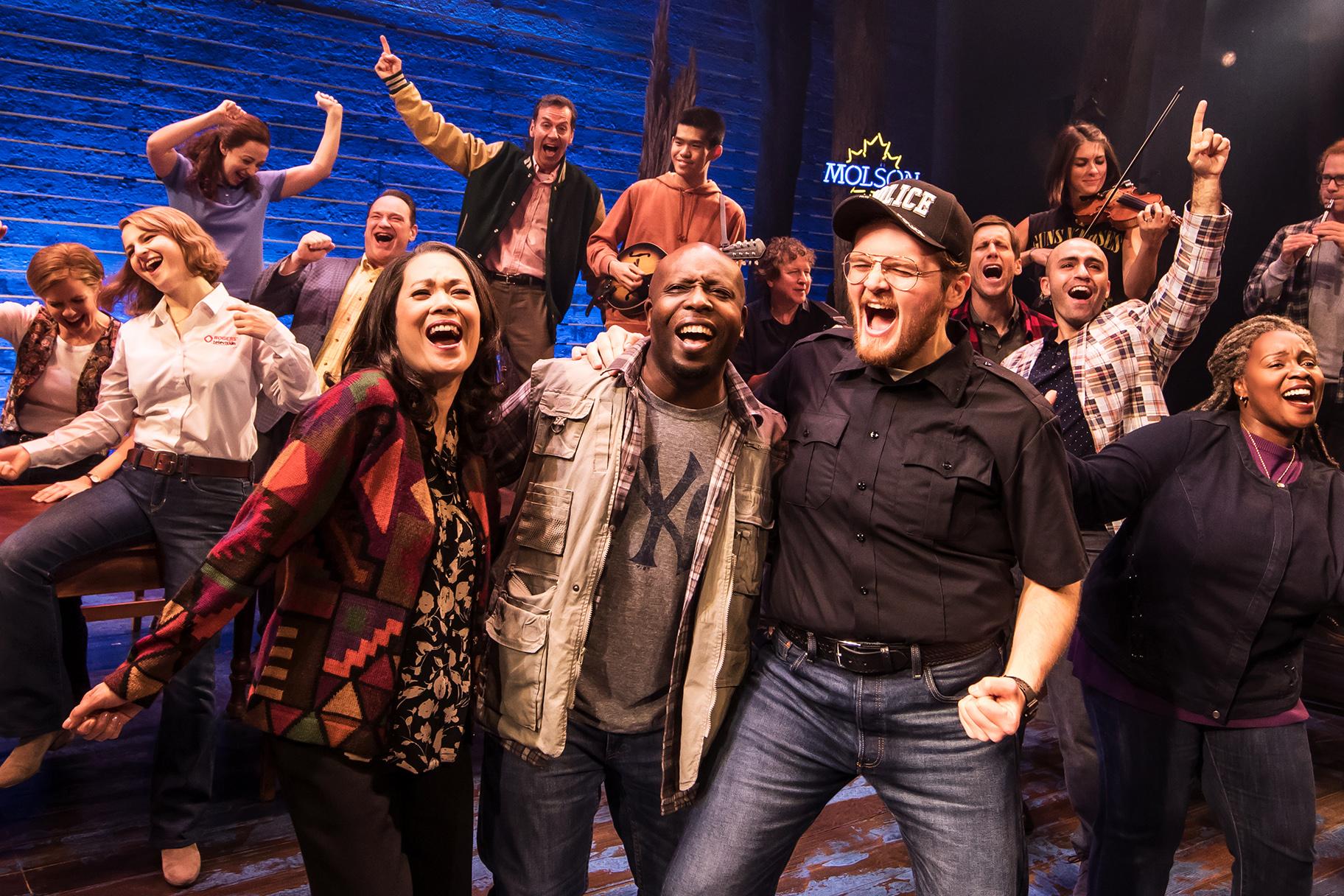 The 12-person cast in “Come From Away” easily morphs in and out of a great array of characters, from stranded travelers from many different countries (not all English-speaking) to the eccentric residents of Gander, Newfoundland, where 38 planes headed to the U.S. were ordered to land. (Photo Credit: Matthew Murphy)

Becky Gulsvig plays Beverley, the attractive pilot who worked long and hard to become the first female captain to fly for American Airlines. Kevin Carolan is Claude, the mayor who has his hands full enough when just faced with a strike by the local bus drivers, but who somehow rises to the enormous challenges of this real crisis.

Julie Johnson is Beulah, the empathetic teacher who bonds with Hannah (Danielle K. Thomas), a passenger terrified by the fact that her son is a firefighter in New York. Emily Watson plays Janice, the young TV reporter in Gander who is new to her job and is now faced with the biggest story she will probably ever cover. And Megan McGinnis provides fine comic relief as the local SPCA worker who tends to the cats, dogs and bonobos she uncovers on the grounded planes.

Veteran Chicago actor James Earl Jones II nails every role, from a jaded New Yorker, to an African man traveling with his wife (and his Bible), to a hilariously clueless macho pilot who keeps putting the moves on Beverley.

And of course there’s an unlikely romance kindled – between a nerdy British oil executive (Chamblee Ferguson) and a somewhat prim Texas divorcee (Christine Toy Johnson), and there’s the breakup of a gay couple (Andrew Somansky as the head of an environmental company, and Nick Duckart as his secretary). Duckart also plays the Muslim chef who generates uneasiness and special vetting once the details of the 9/11 attacks become known. And Harter Clingman plays the droll constable of Gander who also convincingly transforms himself into an Orthodox rabbi.

The big surprise in all this is how the seemingly most unlikely material for a musical ends up feeling as if it were custom-made for the form and turns great darkness into a healing light.

And there is this chillingly ironic footnote: At the very same moment that “Come From Away” arrived on stage in Chicago, news reports broke suggesting that Osama bin Laden’s son, widely seen as the heir to the leadership of al-Qaeda, had been killed.