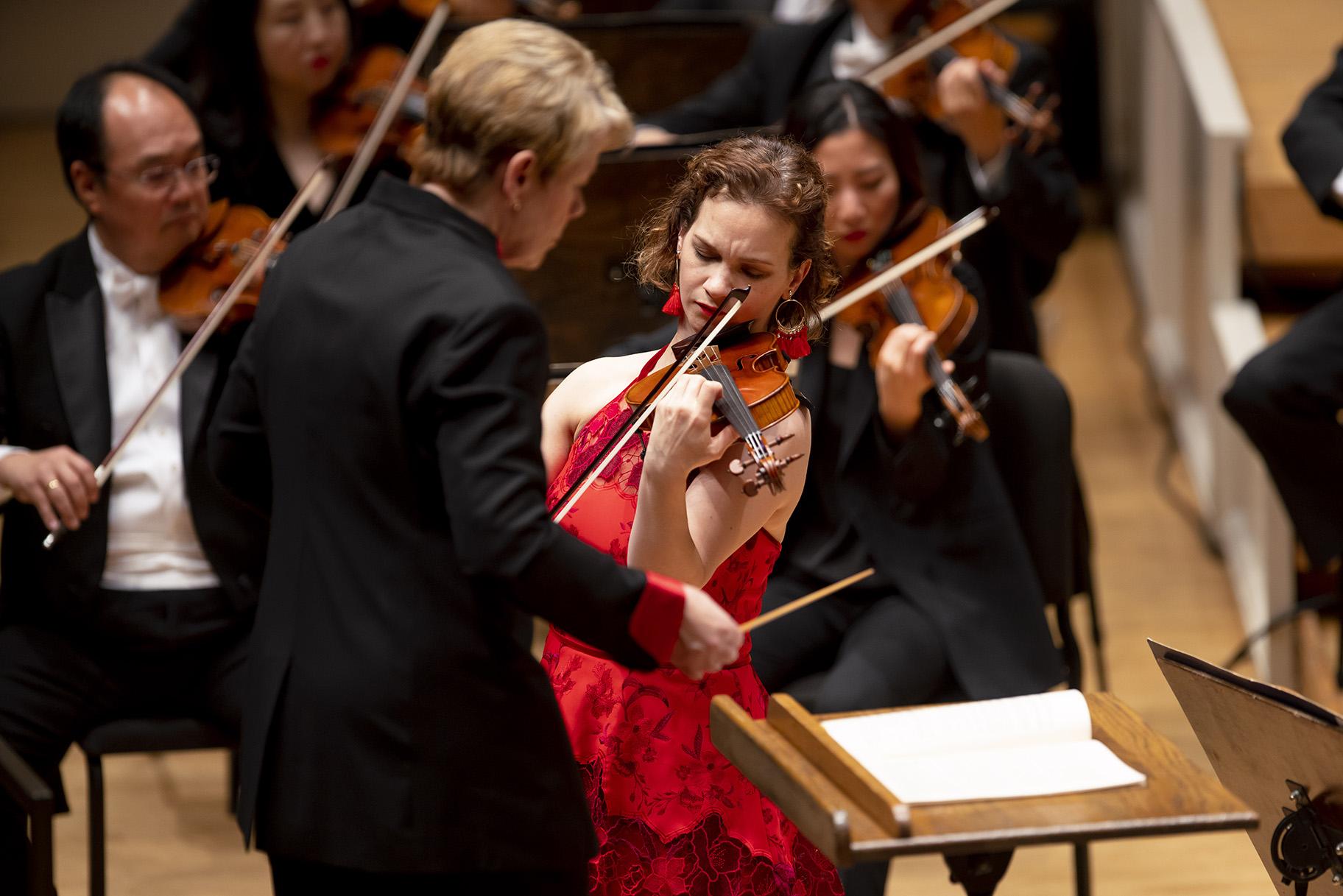 Earlier this month a bit of classical music magic went viral on the Internet when a 9-year-old boy in the audience of a concert by the Handel and Haydn Society at the Boston Symphony Hall spontaneously uttered “Wow!” amid the silence that followed the performance of a piece by Mozart. Luckily, the concert was being recorded, so the child’s voice, which elicited laughter and uproarious applause, can now be heard again and again, and serve as a glorious example of the power of music. It also suggests how many audience members profoundly moved and awed by a great performance tend to stifle their emotions and abide by a certain protocol.

Last Thursday night at Symphony Center, where Hilary Hahn joined the Chicago Symphony Orchestra and guest conductor Marin Alsop in a ravishing performance of Sibelius’ “Violin Concerto in D Minor,” Hahn’s bravura handling of a fire-breathing passage at the close of the work’s first movement brought a similar “Wow!” from what was certainly an adult man in the audience. It’s a good bet that many others might have burst forth with a similar exclamation had they been less inhibited. And while such outbursts should probably not become a new habit, there was something wonderful about the pure emotion of it all.

Hahn is an extraordinary violinist, and not only did she bedazzle the audience with her playing (and with her stunning cherry red gown) but Alsop, and the members of the orchestra – with whom she visibly connected throughout her performance – applauded her as enthusiastically as the audience.

The Sibelius work is unquestionably a stunner – a bravura showpiece, but also a work of great beauty and substance. And Hahn and the CSO played it with all the fire and melodic richness it demands.

To start, a brief hum from the violin section precedes the entry of the solo violin, and Hahn, who subtly dances to the music, brought her burnished tone to the gorgeous initial melody with its haunting, almost mystical tone and then a passage of frenzied bowing. A great romantic theme emerged through both the delicacy and strength in her playing, and it was richly enhanced by the flutes and other winds. And Hahn made a long solo passage speak, infusing it with a meaning that transcended sheer virtuosity and ultimately inspired that “Wow!” 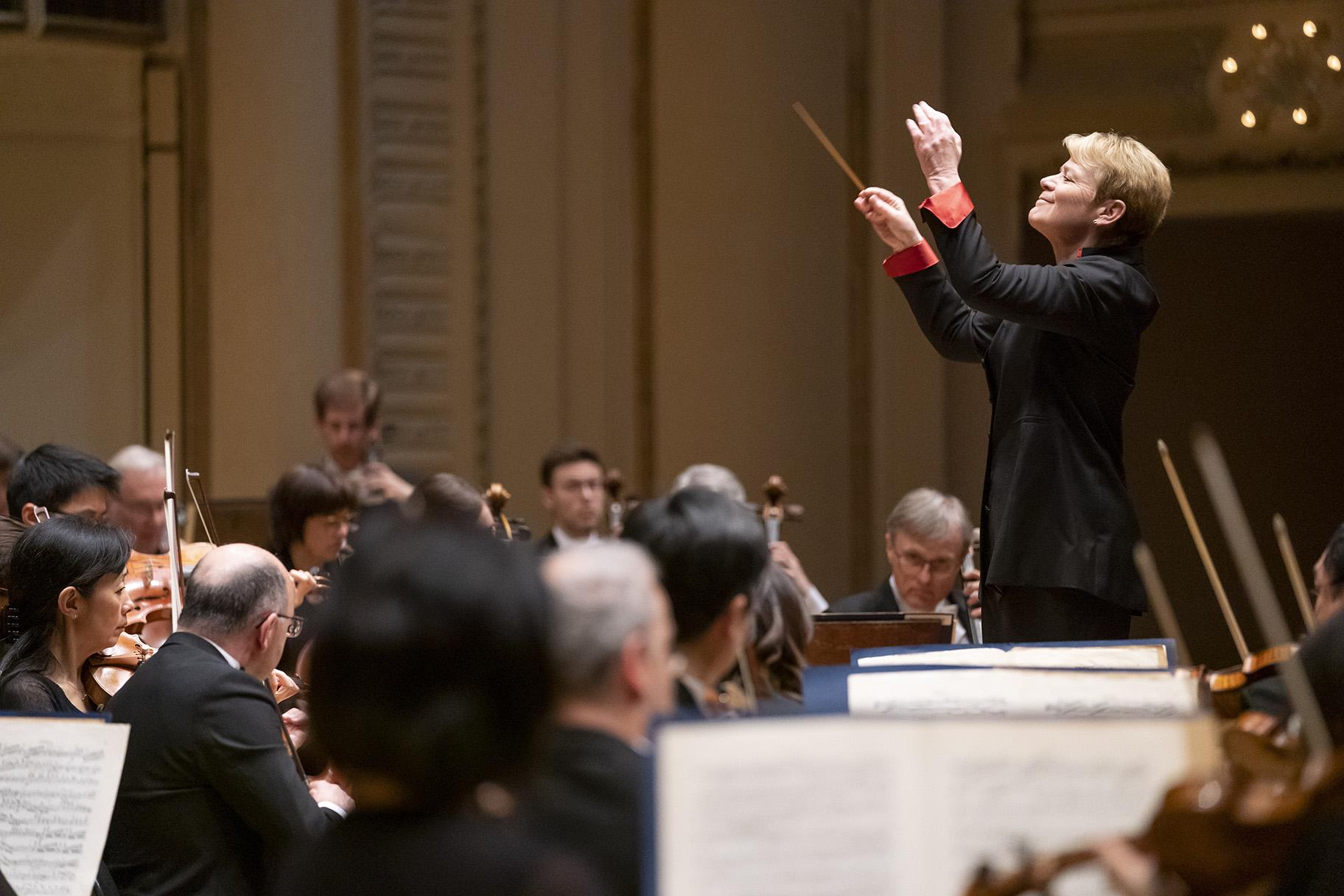 The work’s second movement began with a lyrical, almost pastoral sound from the wind section, with the final movement opening with the sound of the timpani before moving into an intense, folk dance-like theme that Hahn and the orchestra played with thrilling speed, power and dynamism.

The program began with a sweeping rendering of Brahms’ “Academic Festival” Overture, with its great sense of anticipation, the rich use of French horns and other brass, bassoons, flutes and percussion, and the emergence of the composer’s riff on the familiar 13th century toast to youth, “Gaudeamus igitur.”

The second half of the concert was devoted to Rachmaninov’s massive “Symphony No. 2 in E Minor,” a grandiose work that sometimes has the quality of a lushly romantic Hollywood film score, and which gives every part of the orchestra an opportunity to strut its stuff.

The sheer sweep, color, volume and vivid force of the music was palpable throughout, with a final movement full of what might be dubbed “irrational exuberance.” But the symphony itself ultimately feels a bit bombastic, even as the singular playing by the winds, strings, horns and percussion was superb.

Throughout, Alsop, music director of the Baltimore Symphony, brought her high energy, buoyant spirit (and cherry red shirt cuffs) to the proceedings, skillfully replacing the originally scheduled Finnish conductor, Mikko Franck, who had to cancel as a result of a severe ear infection. The Brahms “Overture” replaced the initially planned performance of a work by Finnish composer Einojuhani Rautavaara, but was otherwise as announced.