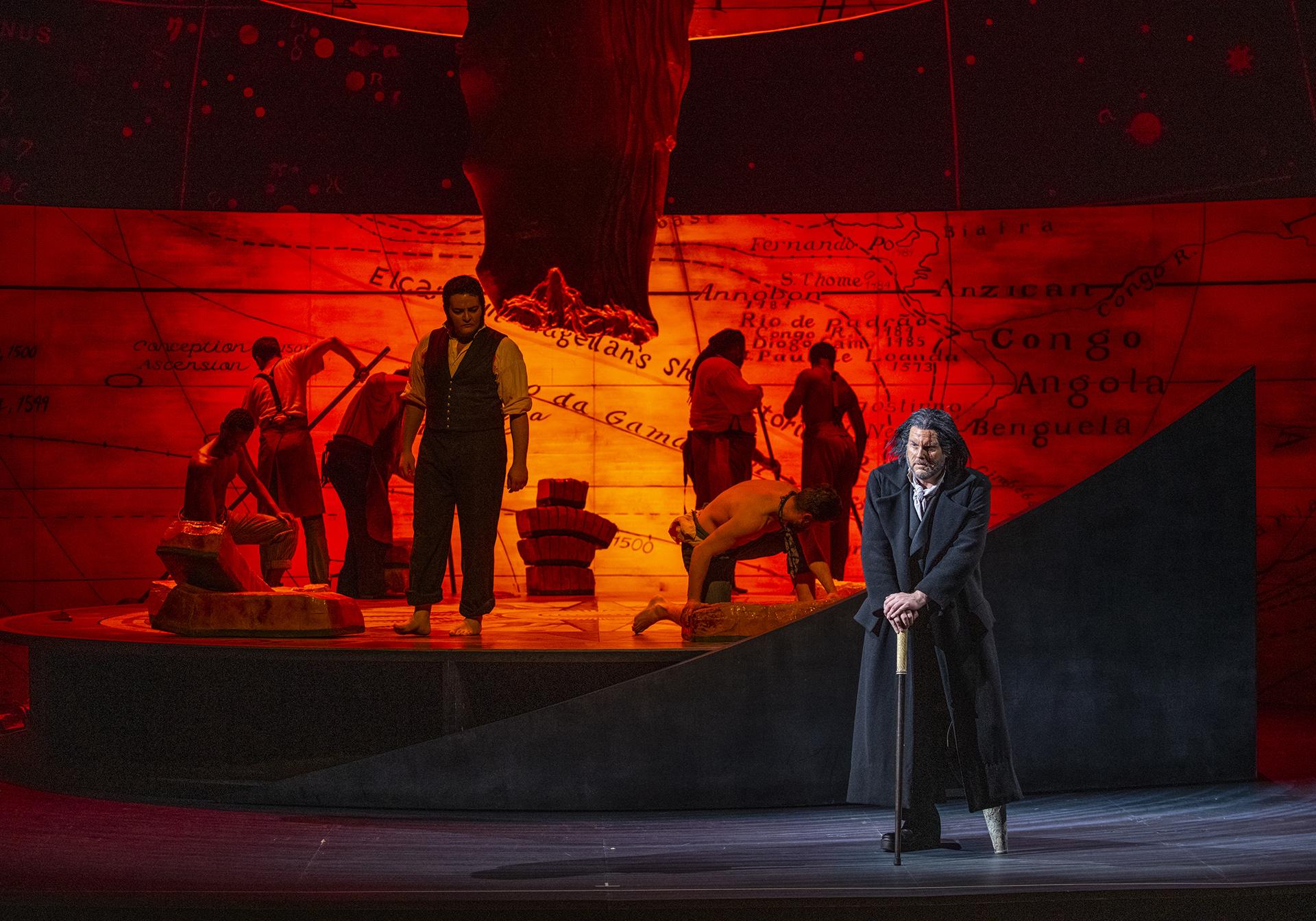 First and foremost: You have only one more chance (this Sunday afternoon) to climb aboard the magnificent, grand-scale Chicago Opera Theater (COT) production of “Moby-Dick” at the Harris Theater for Music and Dance. And I strongly encourage you to book passage on the Pequod, that fabled whaling ship, while you can.

Transforming Herman Melville’s massive 1851 classic about obsession, vengeance, loneliness, spirituality and the thin line between madness and sanity is no easy feat. But this opera, with its crystal clear, winningly poetic libretto by Gene Scheer, and its lyrical, fervent, ideally matched music by Jake Heggie, not only captures the pivotal characters in the novel, but illuminates its major themes with impressive emotional directness. And the mysterious tension that hangs over the epic journey is beautifully sustained as Captain Ahab essentially highjacks what should be the hunt for whales whose oil will earn his crew a living, and turns it into the instrument of his personal goal - to exact revenge on the great white whale, the fearsome creature that, on a previous voyage, tore off one of his legs.

In addition, director Kristine McIntyre has tapped an ideal cast who can act their roles with impressive style, as well as sing them with authority and exemplary diction. But Lidiya Yankovskaya, COT’s young and exceptionally talented music director (and currently the only woman to hold that position with a major American opera company), elicits all the feverish beauty of the score from her superb orchestra, and from the male chorus (directed by AJ Keller) that is more than three dozen strong. 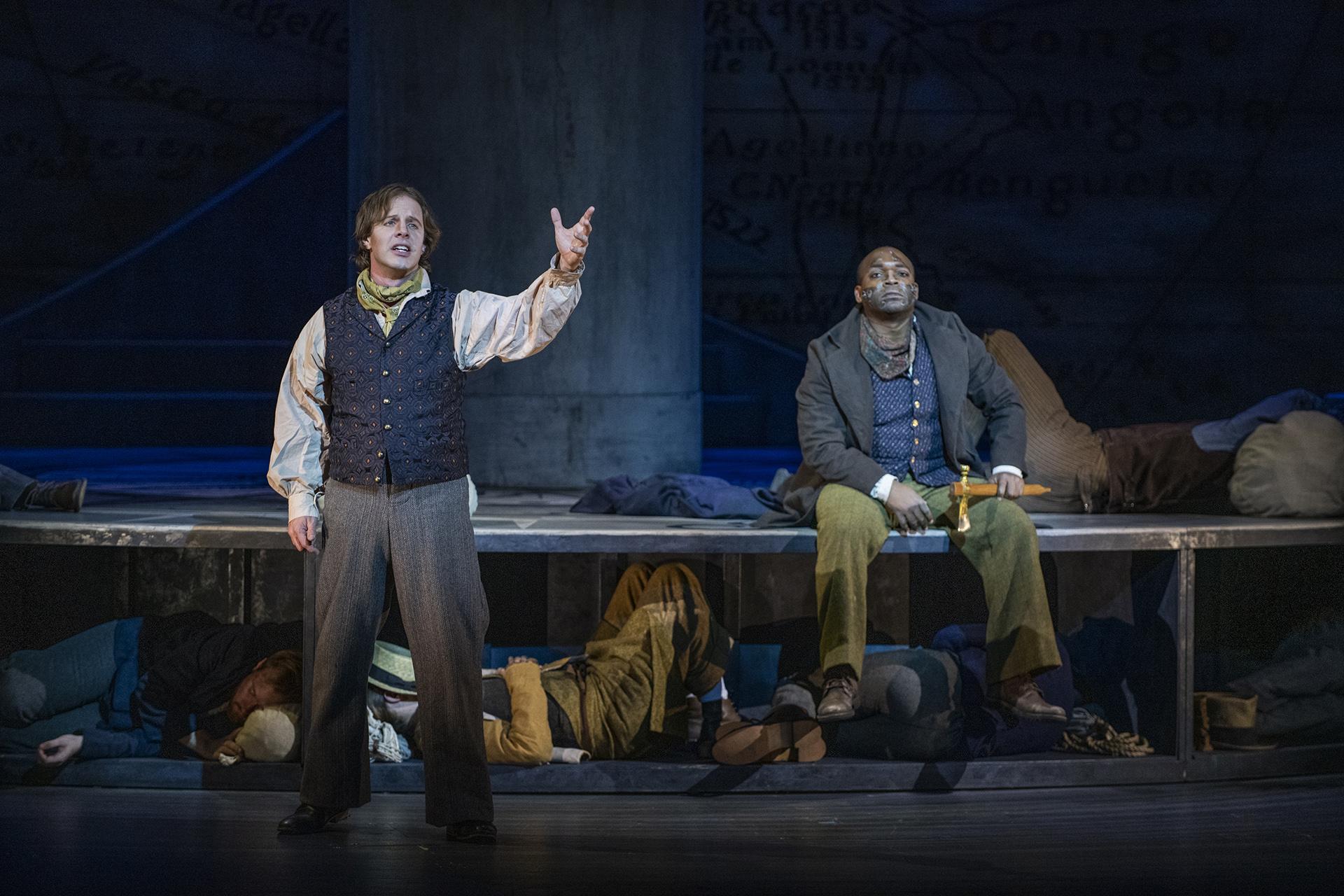 The backdrop for the opera, designed by Erhard Rom (with lighting by David Jacques) is a massive cutaway of the Pequod, with smaller harpoon boats ready to be wheeled into place. A map of the constellations spans the blue sky, and other maps suggest just how far from its home port of Nantucket the ship can travel.

But it is the vast cross-section of men who have signed on for this voyage who are the true stars - men who know the unbending nature, but expert skill of Captain Ahab, a man who has spent 40 years at sea, and now walks with a prosthetic leg carved from a whalebone. And Richard Cox, a tenor who can produce just the right dark notes, too, brings an ideal sense of warped intransigence to the role of this man who has spent 40 years at sea, and has now declared war on a creature who is a force of nature, but in some ways is less of a monster than Ahab himself.

Starbuck, Ahab’s first mate, is a man of faith - a devoted husband and father who is driven by a powerful survival instinct, yet is not quite able to act on his best instincts. And baritone Aleksey Bogdanov does a fine job of balancing the tension between challenging authority and submitting to it.

And then there is Greenhorn, who will assume a far more iconic name before it’s all over, and who is played by Andrew Bidlack, a boyish, sweet-voiced baritone. A lonely fellow, with no family and no experience at sea, he signs on to a ship so he can see the world. And almost immediately he meets Queequeg (bass baritone Vince Wallace, who easily captures the deep mystical sensibility of his South Seas island home). The profound friendship that develops between these two men of different ages, faiths and experience is not unlike the relationship between Huckleberry Finn and Jim, the runaway slave, in another great American novel. And in many ways it is the moral anchor of Melville’s story in which God, and man, and Mother Nature, and that thing called “Fate” all loom large in what is very much a man’s world. (There is one female performer here - Summer Hassan - the excellent soprano, in the pants role of Pip, the high-spirited fellow who almost drowns). 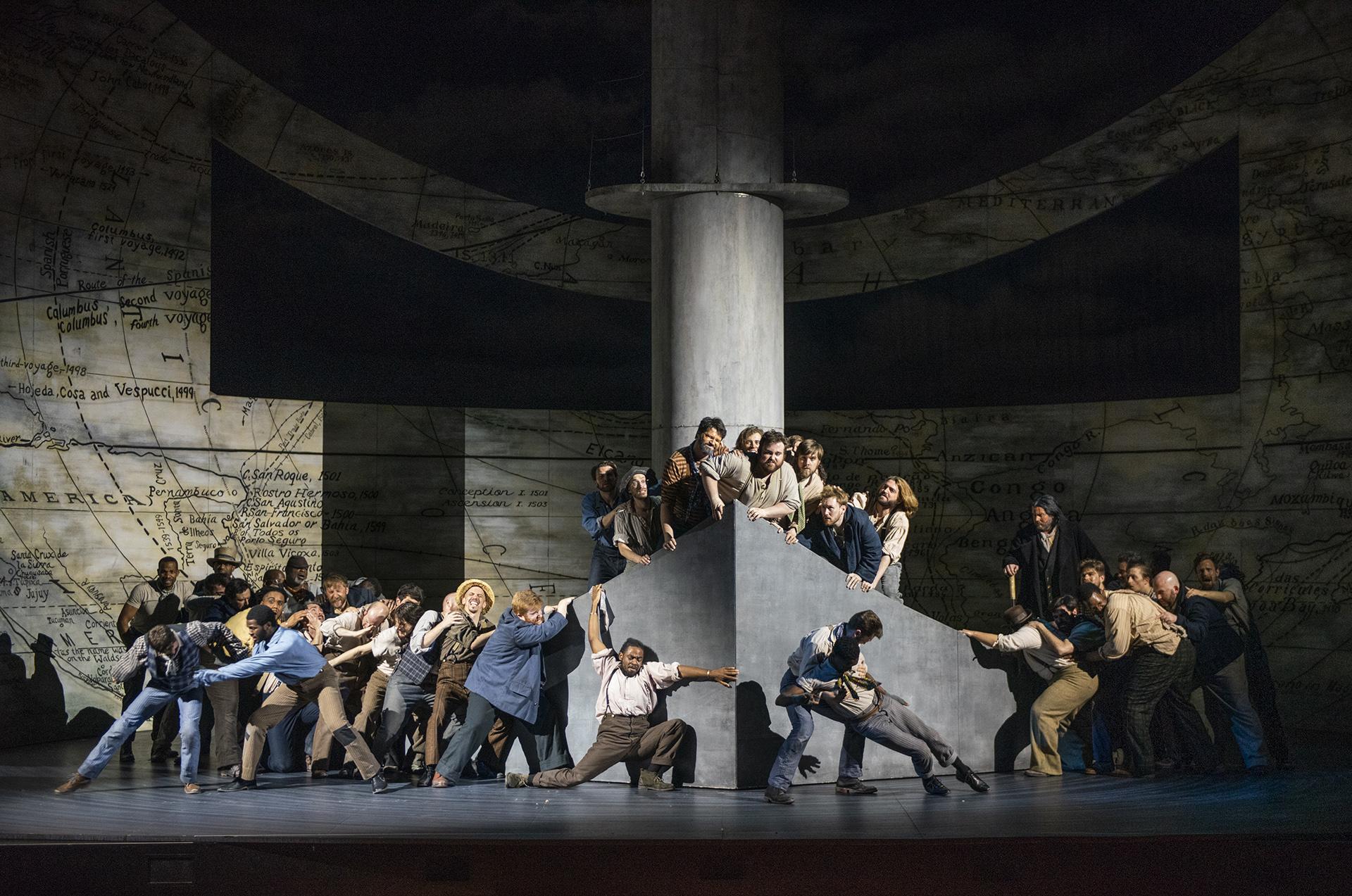 The cast of “Moby-Dick.” (Photo by Michael Brosilow)

Adding more shipboard zest are Stubb (bass Nicholas Ward, who brings an infectious love of life to his role), and Flask (tenor Aaron Short). And in an emotionally powerful scene played from an aisle of the theater there is Christopher Magiera, a rich-voiced tenor, as Gardiner - a fellow captain who pleads from afar with the emotionally detached Ahab to help him rescue his son, who has been swept away at sea.

If I have one quibble with the production, it is the way in which the bloody climax of the tale is realized - or more to the point, not realized, as a curtain with the image of the sea is lowered, and the tragic encounter with Moby-Dick is left entirely to the imagination. Even great streaks of red blood might have done the job, and taken nothing away from the sight of the solitary narrator whose name, as you probably well know, is Ishmael.