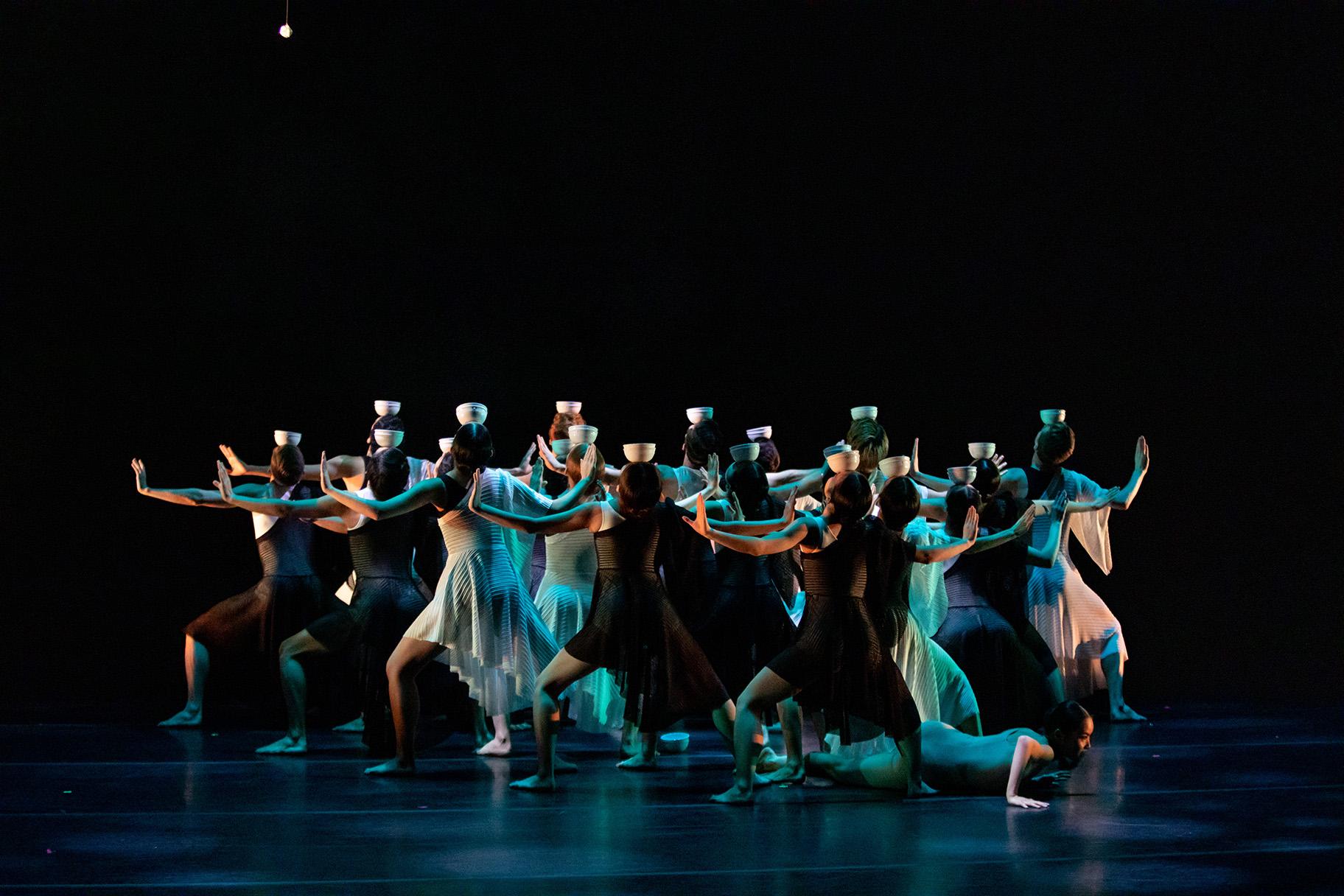 “Winning Works,” the program of four world premiere pieces by the winners of the Joffrey Ballet’s ninth annual choreographic competition for African, Latino, Asian, Arab and Native American artists, arrived on the MCA (Museum of Contemporary Art Chicago) stage for three sold-out performances this weekend. And it was remarkable on many levels – from the dazzling technical skill and emotional conviction of its performers (20 of the most advanced students from the Joffrey Academy of Dance, the company’s official school), to the sophistication and complexity of each choreographer’s work and choice of subject matter and music.

In addition, coming at the end of a month of exceptional dance and largely sold-out houses, it once again confirmed this city’s growing passion for dance, especially on the grand stages of both the Auditorium Theatre (where the Joffrey presented the world premiere of “Anna Karenina,” Hubbard Street Dance Chicago joined forces with Cuba’s Malpaso Dance Company, the Alvin Ailey American Dance Company introduced powerful works by Rennie Harris, Jessica Lang and Wayne McGregor, and the Trinity Irish Dance Company reveled in a percussive vibe), and the Harris Theater for Music and Dance (where the English National Ballet performed Akram Khan’s mesmerizing “Giselle”).

In the intermissionless 80-minute “Winning Works” program, each highly demanding new piece (selected from a record 144 applications) was prefaced by a brief video featuring rehearsal footage and comments by the choreographers and dancers, and supplied just enough time for rapid-fire costume changes. And with the confidence and high level of professionalism of far more experienced dancers, the young performers flawlessly met every challenge. 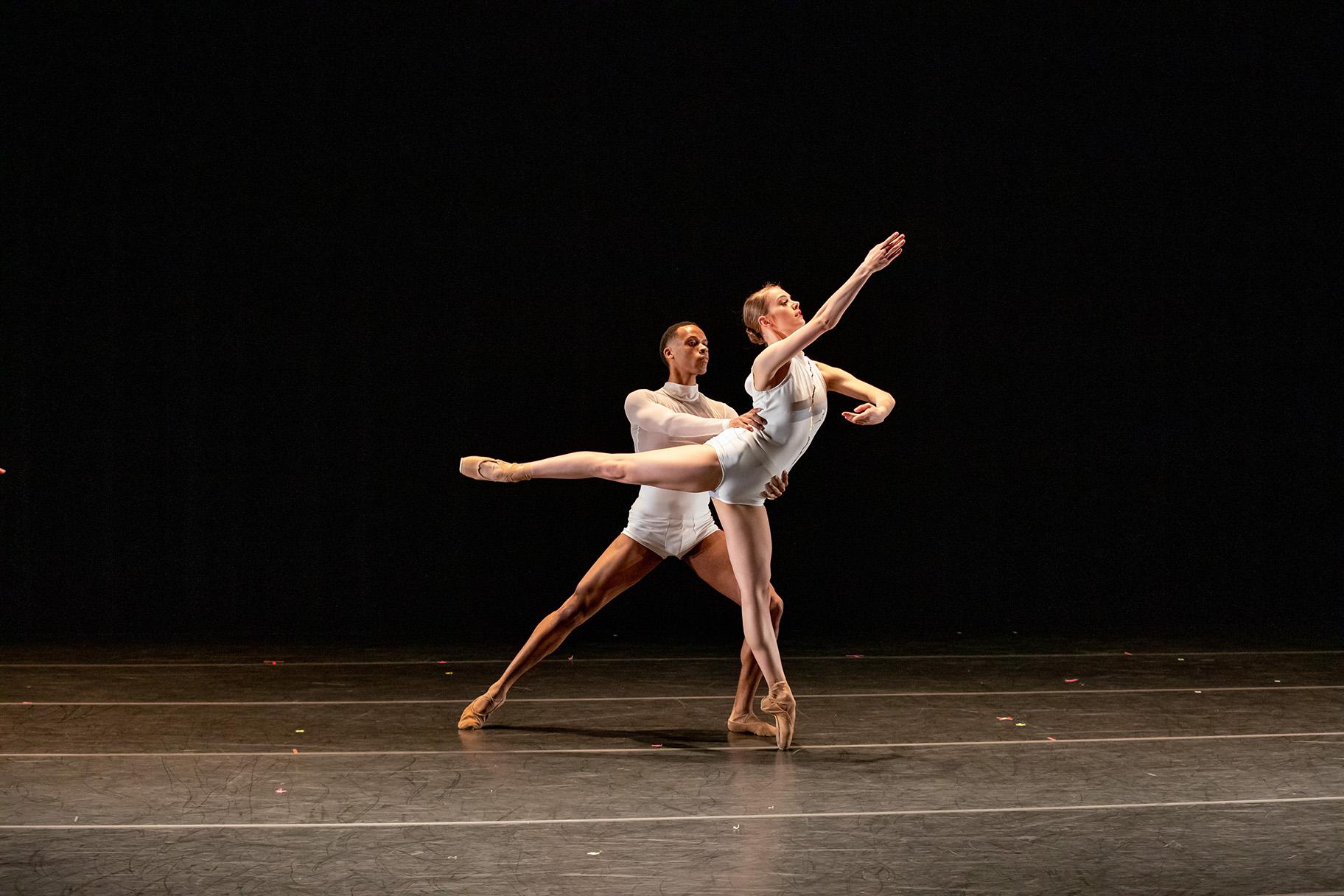 Opening the program was Edgar Zendejas’ “Lineas,” a neo-classical work set to the music of Ezio Bosso, and danced in minimalist white costumes. It suggested the style of a latter-day George Balanchine in its shifts from solos, to difficult pas de deux with dramatic lifts, to large ensemble sections that had the dancers moving in and out of an array of formal patterns. The theme of the work was the tension between the individual and the group. And the technique of all involved was on a high level, with a section of pointe work showing off the beautiful extensions and arched backs of the women, and the impressive poise and partnering skill of the male dancers. 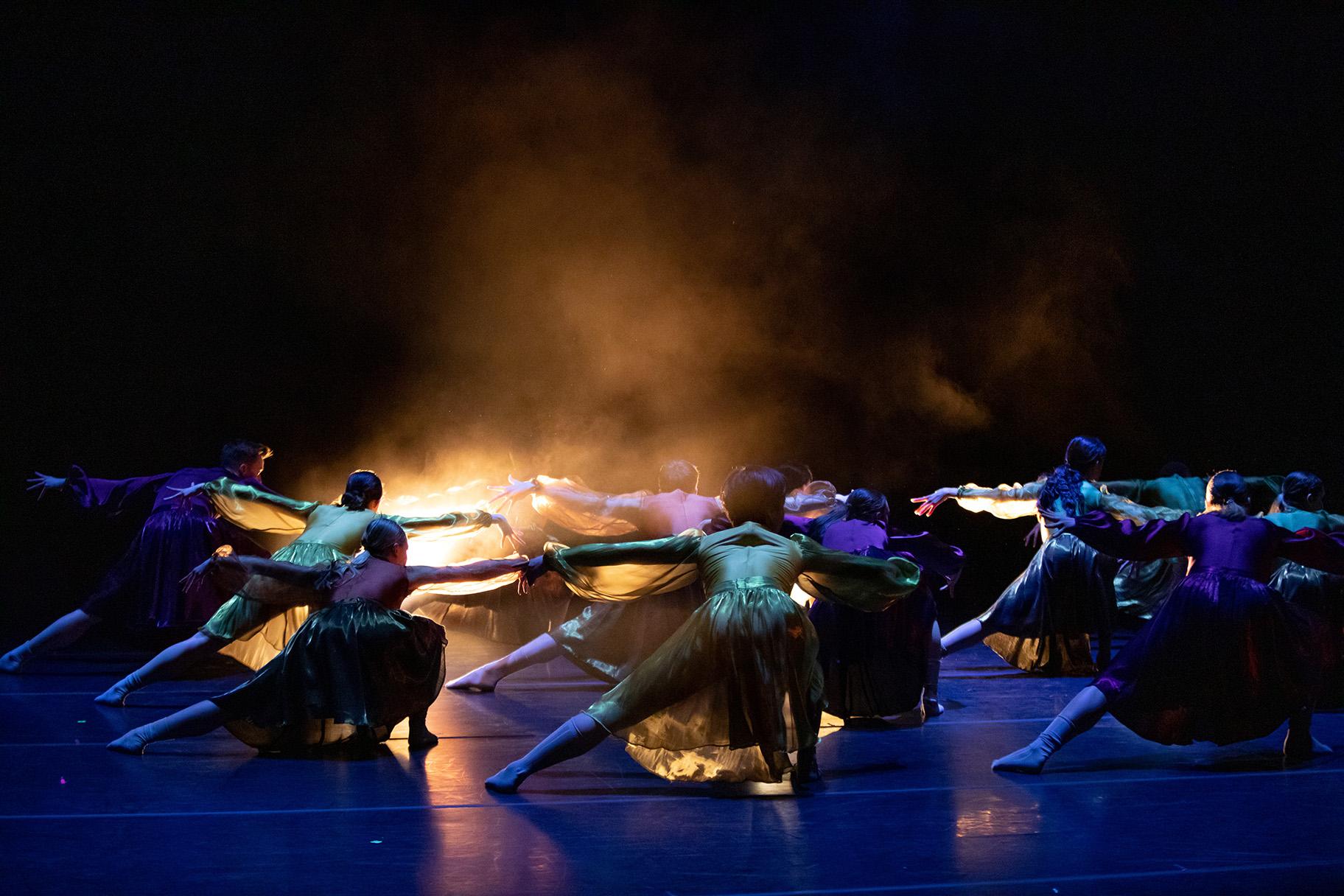 Tommie-Waheed Evans’ “Coup de Grace” (the title suggests the death blow given to put a severely wounded human or animal out of its misery) is a profoundly raw, powerful, ritualistic dance, set to an original score by Cory Neale that begins with a blast of techno-enhanced sound. The apocalyptic mood, captured in Evans’ percussive, hard-driving movement, is further conjured by Claire Chrzan’s darkly shadowed lighting, a drifting fog, and the gold and purple-skirted costumes of the dancers. Bodies fall to the ground, the men engage in martial arts moves, duets are acrobatic in this thrilling, superbly performed piece. (And it should be noted that both Evans and Zandejas credited their choreography as “in collaboration with the artists.”) 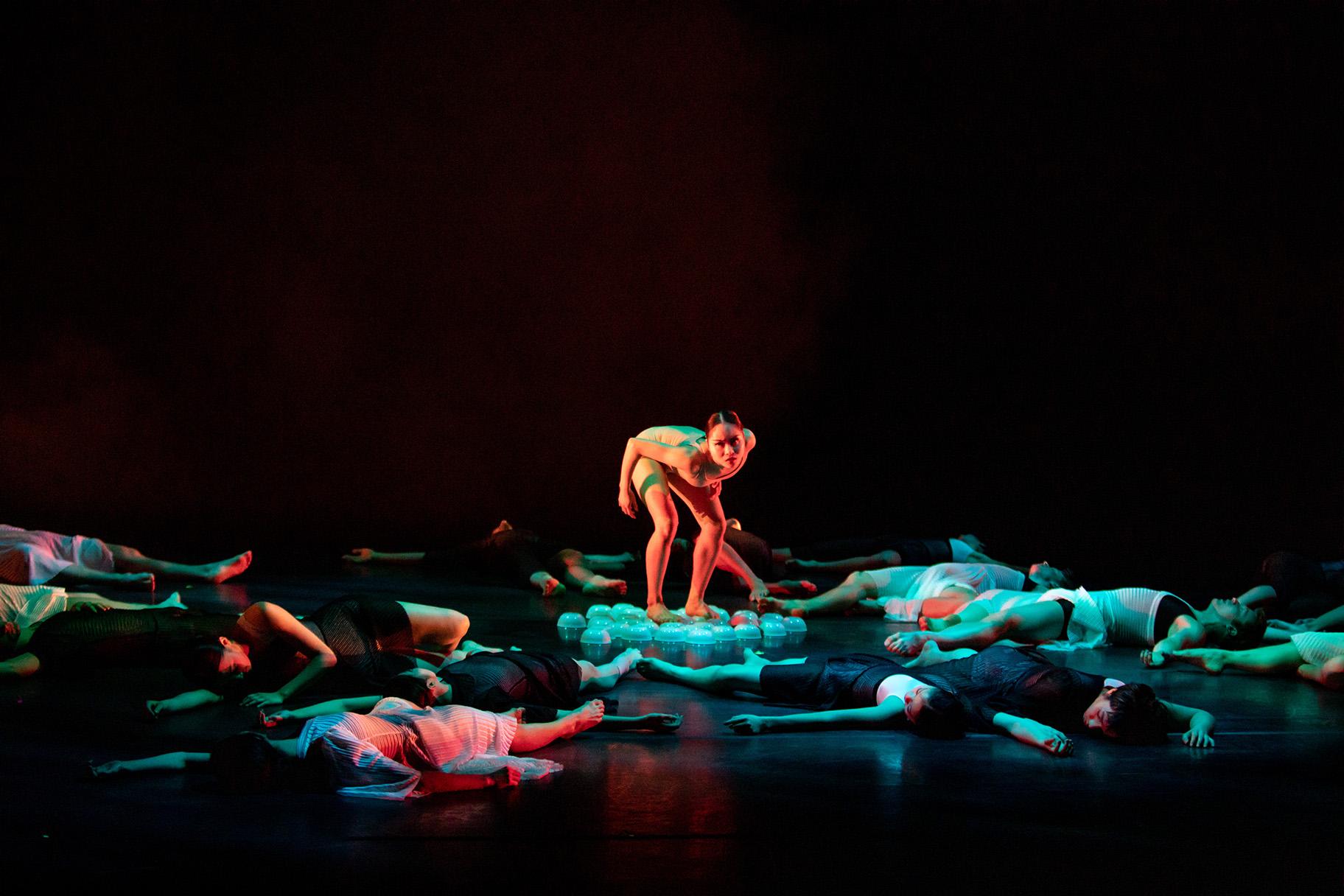 A very different sort of ritual quality informed Xiang Xu’s “Vessels Bearing,” set to an original score by Adriano Fontana and designed to suggest the diverse nature of Eastern and Western culture. In the introductory video, Xu very aptly described contemporary dance as “a physical form of philosophy.” In his piece, which begins with a low hum and the subtle sounding of a gong, one dancer is encircled by the ensemble and all gradually balance small rice bowls on their heads, with a suggestion of the containing energy of those vessels. The dance develops into a beautiful, prayer-like ritual with the gently clattering sound of the bowls heard as they are placed on the floor to form a sort of pathway, with a single woman (the excellent Miu Tanaka) gently stepping over the backs of those gathered. A lovely, poetic work. 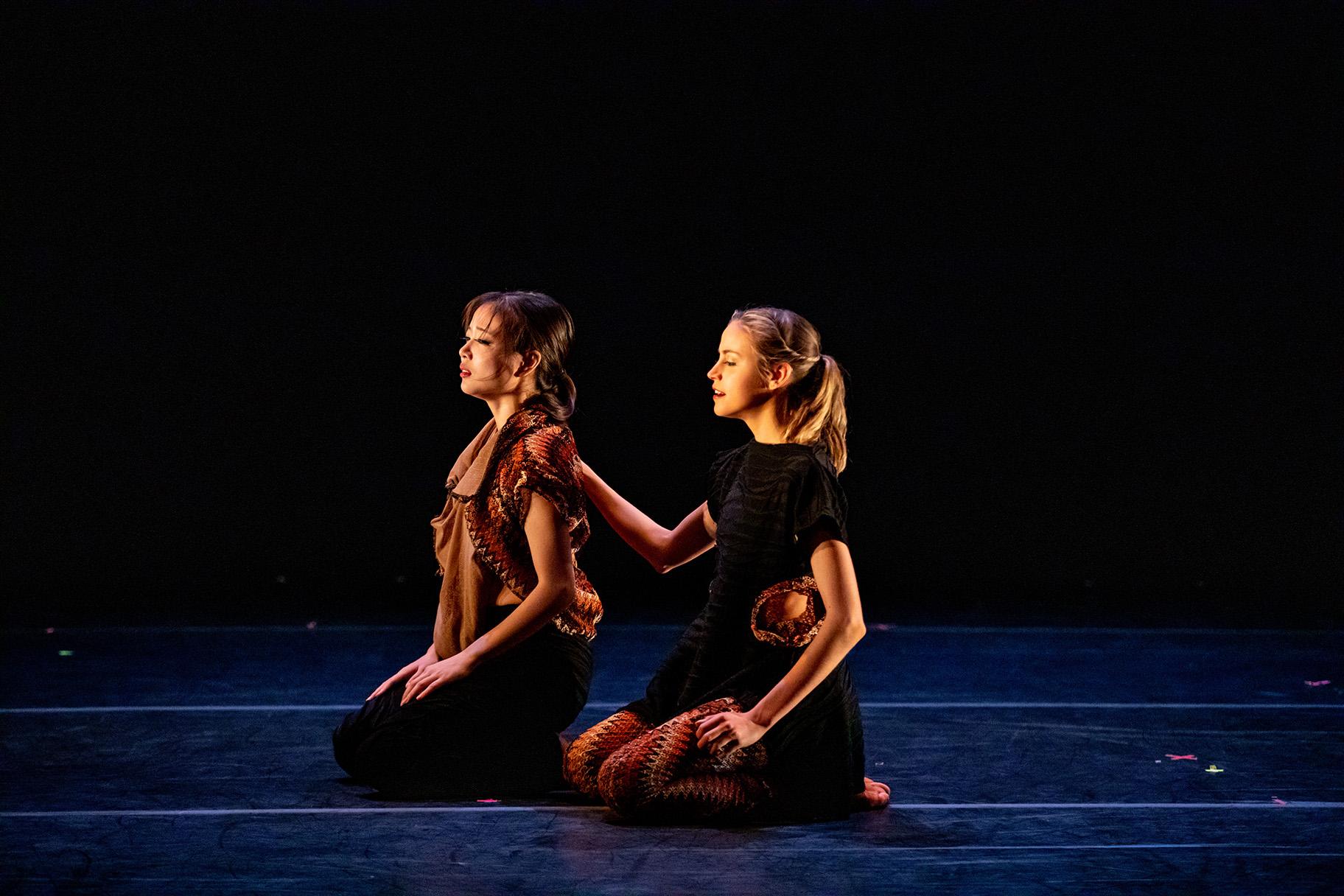 The final piece on the program, Marissa Osato’s “Give the People What They Want” (set to yet another original score – this one by Elliot Callighan), is a study of the often exhausting disconnect and tension that can exist between a person’s “true” inner self and the persona presented to the outside world. An expertly rendered emotional drama (with patterned tights and tunics by Luis Razo), it finds one frenzied woman (superbly evoked by Marin Soki) desperately struggling to reconcile those two aspects of herself, with fake smiles alternating with inner torment.

The Museum of Contemporary Art (with its intimate but expansive stage), is one of the 15 Chicago cultural institutions just announced as forming the newly launched Water Tower Arts District. The other venues, all within walking distance of the historic Water Tower, include: The Arts Club of Chicago, the Broadway Playhouse at Water Tower Place, City Gallery in the Water Tower, the Graham Foundation, the International Museum of Surgical Science, Lookingglass Theatre, the Loyola University Museum of Art, the Newberry Library, the Poetry Foundation, Porchlight Music Theatre, the Richard Gray Gallery, the Richard H. Driehaus Museum, the Ruth Page Center for the Arts and the Society of Architectural Historians. For additional information visit watertowerarts.org.