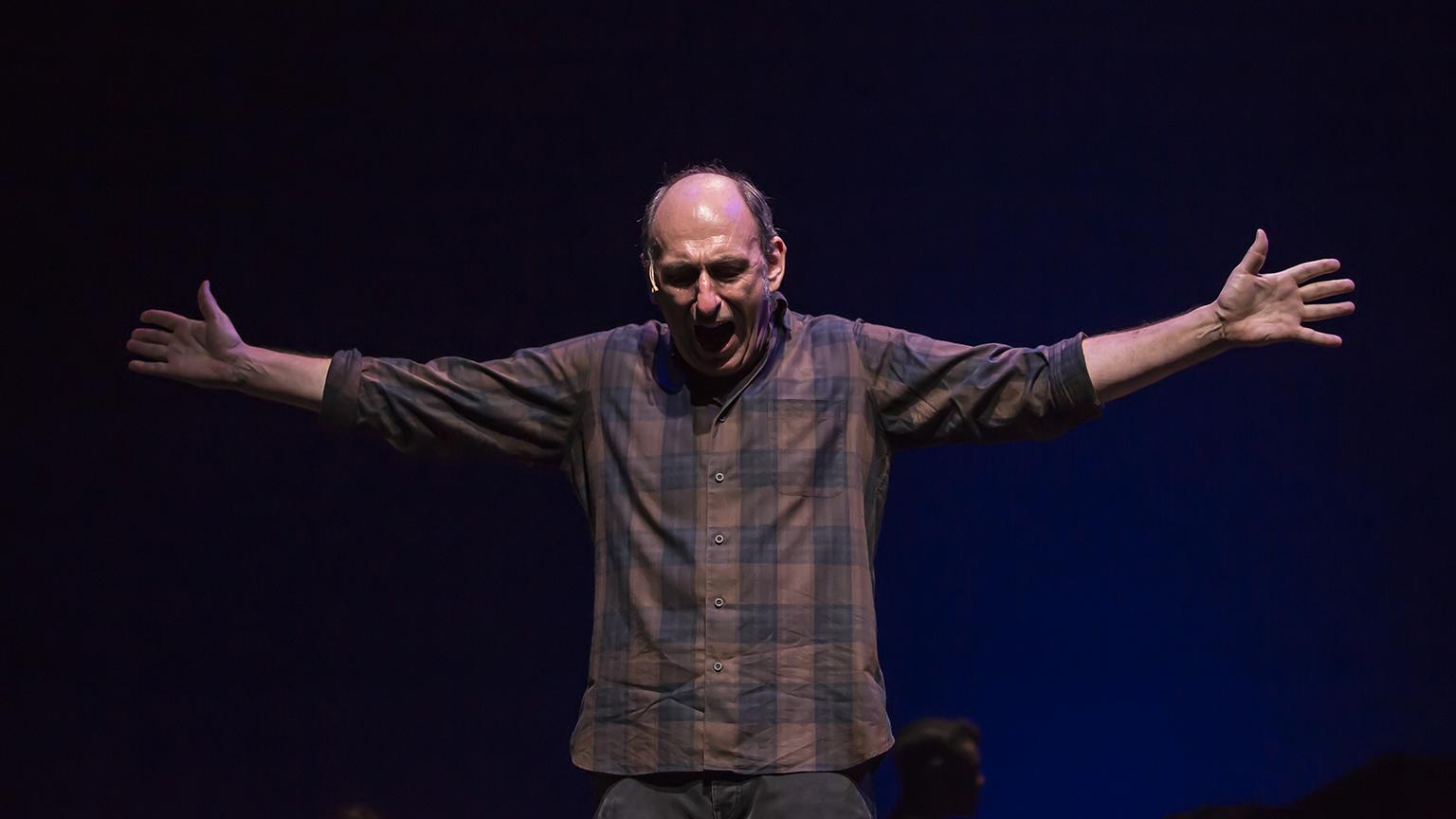 If ever you had any doubt about the healing and transformative powers of art, “We’re Only Alive for a Short Amount of Time,” David Cale’s hypnotically beautiful, crushingly sad, weirdly spirit-lifting one-man (and six musician) family portrait, will set you straight.

Cale’s show, which had its world premiere Monday at the Goodman Theatre, is one of those rare works that might well make you want to rush past the lobby crowd and into the silence of your own thoughts. That is just what I did, and as I drove home I found myself singing “Nature Boy,” that iconic Nat King Cole hit written by the rarely credited Eden Ahbez, which begins: “There was a boy/ A very strange enchanted boy/ They say he wandered very far, very far/ Over sea and land/ A little shy and sad of eye/ But very wise was he.”

As it happens, Cale’s show needs no additional songs. He and Matthew Dean Marsh (his superb music director, arranger, and pianist) have penned a dozen of them. Haunting, quirky, funny, poetic and ideally laced into the storytelling, they are exquisitely played by Marsh and his ensemble. And they are performed with the same mix of the otherworldly and the painfully real that Cale brings to every instant of his 90-minute show.

The story Cale spins is his own about his emergence from a profoundly dysfunctional family in the grayer-than-gray, crime-infested industrial city of Luton, England, where his corrupt and emotionally cruel grandfather owned a hat-making factory. His father turned into a serious alcoholic (and far worse), and his mother - a woman whose artistic talent and love of life were continually squelched - failed to liberate herself until it was too late. Marital discord would be the most extreme understatement of what transpired between his parents, but to say anything more would be to give away the story’s most shocking element.

As for Cale, he somehow miraculously managed to seize the day, but not until he had survived a childhood and adolescence that not even the Grimm Brothers could have imagined. And only now, when he is well into middle age, has he found a way to tap into his family’s story, drawing on the bittersweet legacy of love that his mother left behind, on his guilt at allowing himself to manipulated when called to testify at a trial, and on the loopy humor of his boyhood projects and his later infatuations with the musical girl power of the likes of Petula Clark, Liza Minnelli and Joni Mitchell.

And there are the coping mechanisms that helped get him through it all early on, especially the time spent tending chickens and exotic birds at a little shed in his backyard that he turned into an animal hospital for which he served as chief veterinarian. But to describe all this is one thing: It is a wholly different thing to watch Cale, with his distinct vocal timbre and offbeat body language, as he sings about “Canada Geese” (the show’s opening song, and a subtle hint at the rescue fantasies sought by all the members of his family, including his younger brother, Simon), or “The Feral Child,” the show’s extraordinary anthemic finale.

Beyond that there are the songs that capture his mother’s inner life, as when she wonders “If I’d Gone Left” (and never married Cale’s father), or as she asks “Will I Ever Kiss A Man Again?”  There also is the bedeviling question Cale’s father asked his son when he visited him in prison: “Are You My Boy?” And there is the spoken memory of a birthday card bought by his mother that becomes Cale’s equivalent of “Rosebud” in “Citizen Kane.”

The production, meticulously directed by Robert Falls, has a lovely, far from antiseptic minimalism about it, with a bare stage initially animated by the magical set design of Kevin Depinet, whose three-dimensional “curtain” of silvery birdcages suspended from the rafters is lit by another magician, Jennifer Tipton. She also sees to it that the onstage musicians - including Marsh, Dave Belden (viola), Michelle Campbell (Harp), Desiree Miller (cello), Jered Montgomery (trumpet), and Anna Najoom (clarinet) - are bathed in a golden haze.

Cale’s fairy tale ending and laugh-out-loud humor do not erase the darkness at the core of his story. But there is something triumphant about his very survival, and the way art became his salvation even if it failed to rescue his mother. Cale, to his credit, got out. He “went right.”