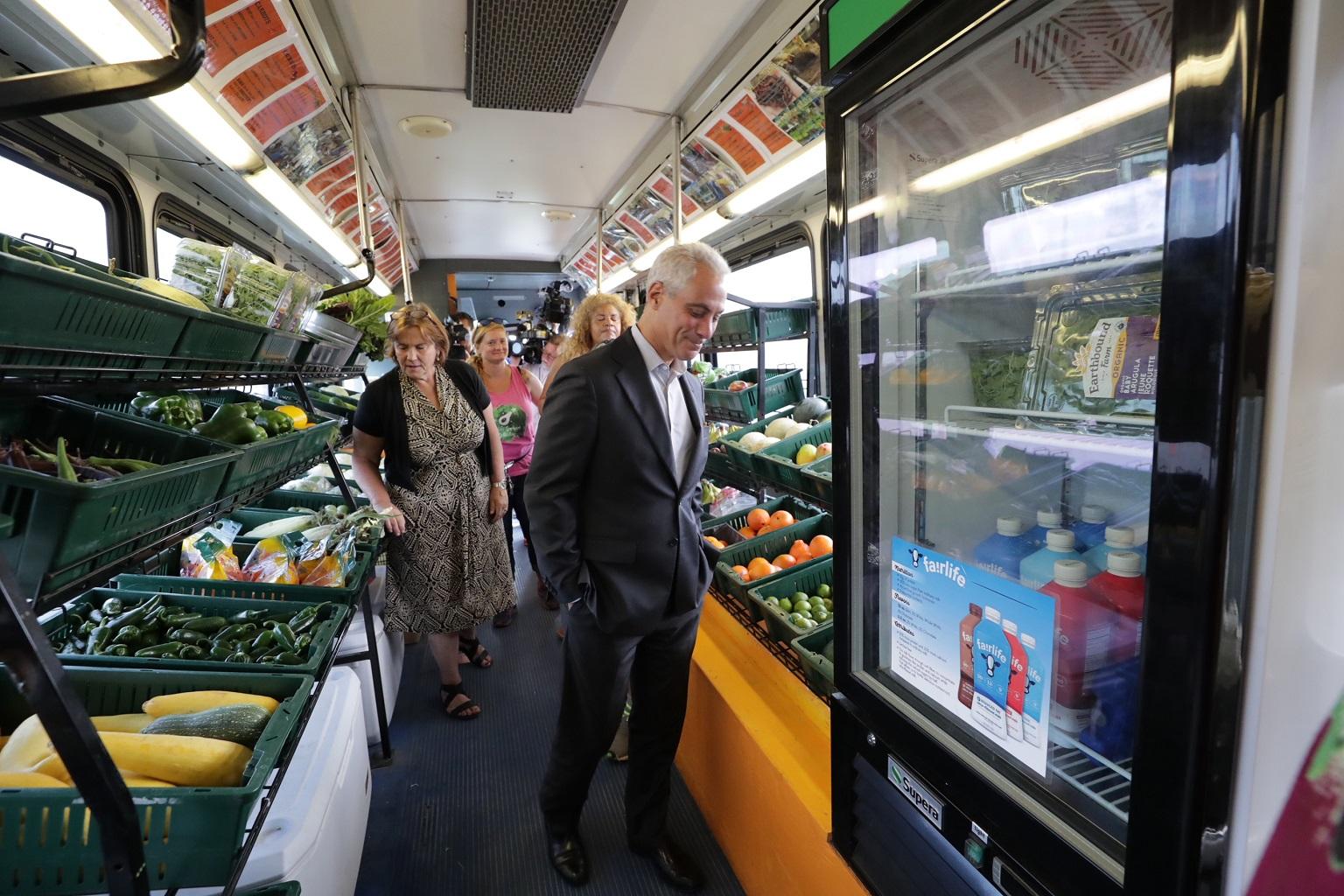 Mayor Rahm Emanuel tours a mobile market operated by the Urban Growers Collective during an event on Aug. 22, 2018. (Courtesy City of Chicago)

An urban farming program that started barely two years ago with 7 acres of land near a former steel mill and a converted mobile library celebrated a milestone Wednesday, having served 10,000 customers with fresh fruits and vegetables.

On the bus, shoppers can select from an array of fresh fruits and vegetables, about 80 percent of which are grown on 11 acres of city farms run by Urban Growers Collective, which operates the mobile market program. The biggest farm consists of 7 acres at Schafer Park, directly across from the former U.S. Steel site just north of where the Calumet River meets Lake Michigan.

It took several years of remediation by the Chicago Park District to transform the site into an urban farm, said Erika Allen, Urban Growers Collective’s CEO and a former Park District commissioner.

But the organization’s trademark program is the mobile market, which marked its milestone with a press event Wednesday afternoon at its 7-acre farm. 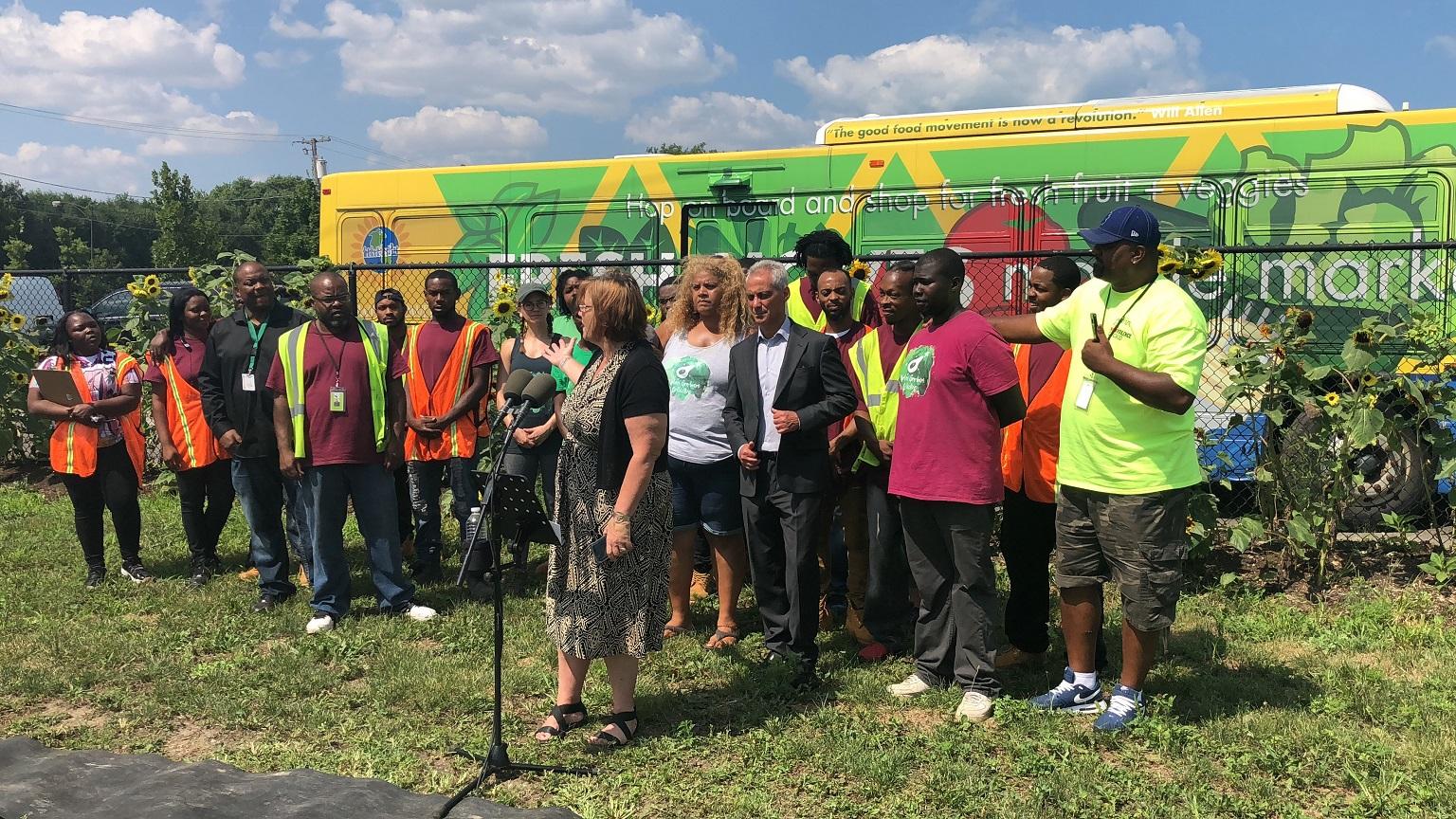 Along with grants and corporate partnerships, the organization uses sales from the mobile markets to support its slate of programs, Allen said.

“It represents the kind of transformation we want to see in our communities, where the folks from the community are controlling and operating and profiting from this healthy system,” said Allen, the daughter of former professional basketball player turned urban farmer Will Allen.

Mayor Rahm Emanuel used the organization’s milestone to tout his goal of reducing by half the number of food deserts in Chicago, classified by the U.S. Department of Agriculture as impoverished areas where at least a third of the population lives more than a mile from a supermarket or large grocery store.

Emanuel said there were 2 acres of urban farming space in Chicago when he took office in 2011, compared to 20 acres now. 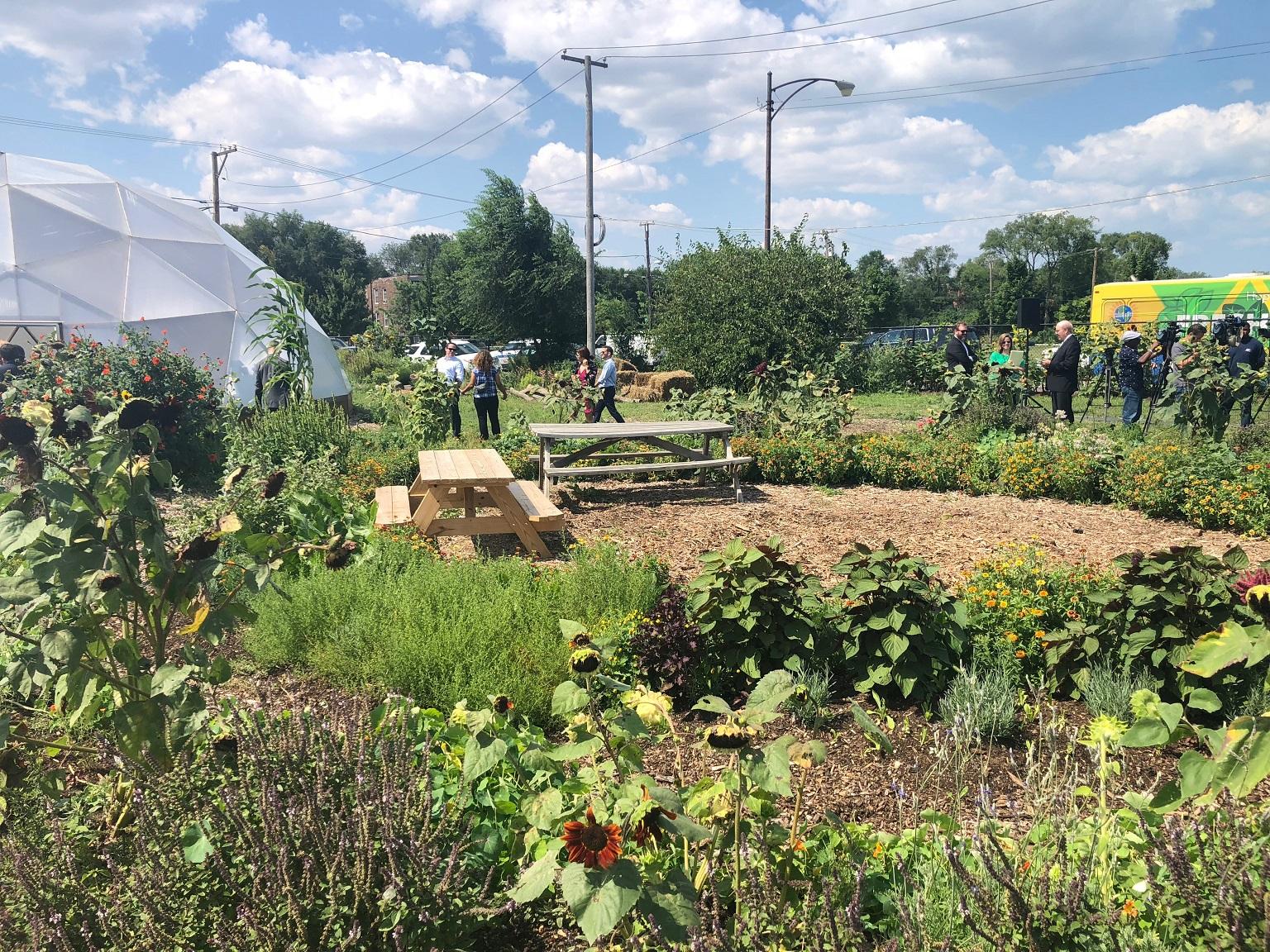 Prior to Wednesday’s event, Urban Growers Collective’s mobile market busses made their weekly trip to a senior facility run by Claretian Associates in South Chicago. There, shoppers could select from sugar baby watermelons (a favorite at the moment), purple okra and cartons of other fresh foods and veggies.

In addition to cash and debit or credit cards, customers can pay with benefits through SNAP (the Supplemental Nutrition Assistance Program, commonly known as food stamps) and other assistance programs.

Many customers say they wouldn’t be able to make it to the grocery store to purchase similar foods, said Fresh Roberson, coordinator of the Fresh Moves Mobile Market.

“Especially at our senior facilities, a lot of times people are like, ‘I would have just eaten a TV dinner,’” she said.

Up next for Urban Growers Collective is the organization’s first fundraising gala, set for Oct. 4 at Theater on the Lake. The keynote speaker will be Sam Kass, former White House chef during the Obama administration.

The nonprofit is also working with a utility company to secure solar panels at its Schafer Park site in order to more efficiently power its walk-in coolers and other equipment.

“I think the next big thing for us is just finessing everything we’re doing, getting the rest of the infrastructure here, having enough space to expand and provide more opportunities with this,” Allen said.