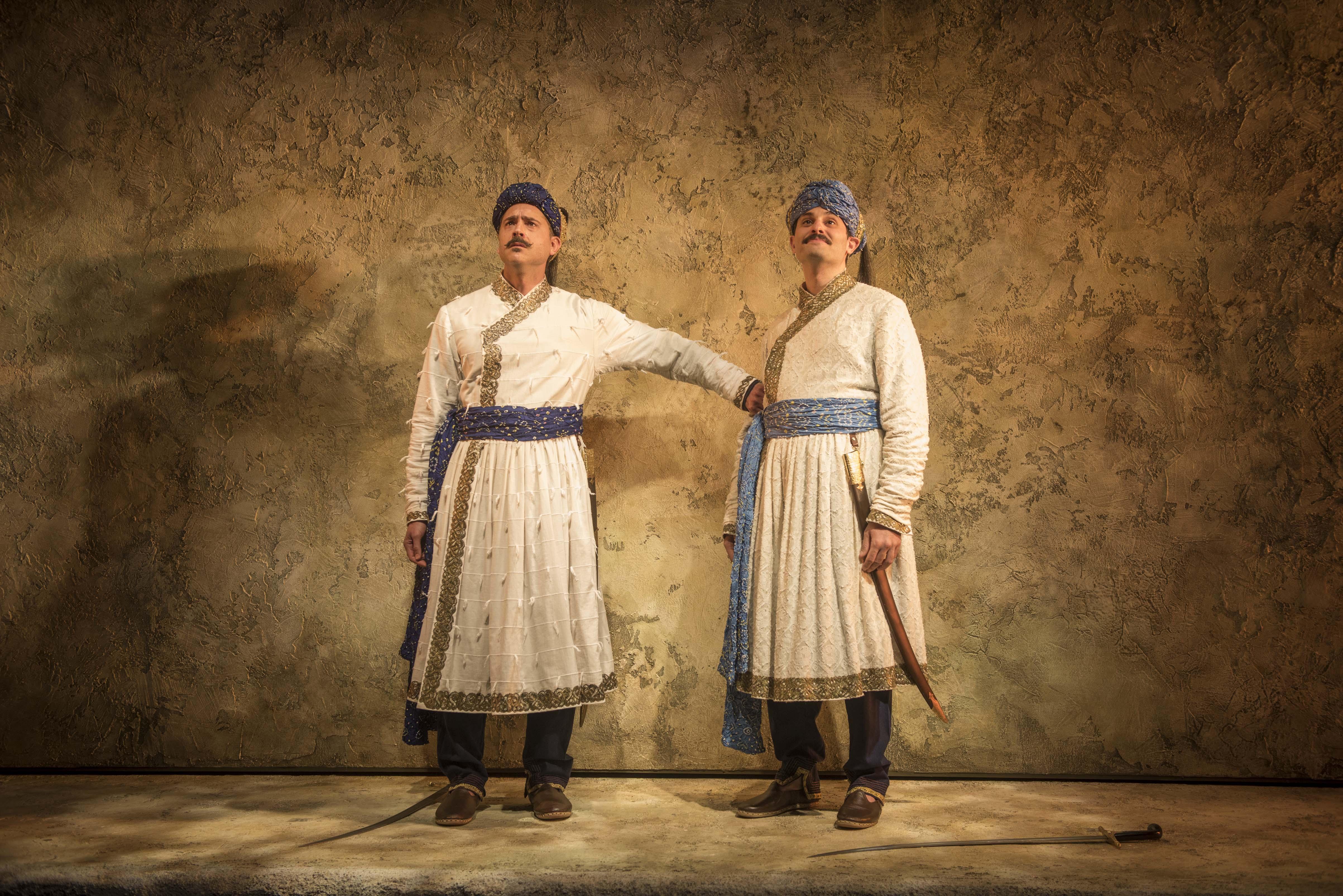 Omar Metwally and Arian Moayed in Steppenwolf’s Chicago premiere of “Guards at the Taj” by Rajiv Joseph. (Photo by Michael Brosilow)

It is no secret that we live in a world of grotesque extremes. While one person feasts, another starves. While some spend the evening listening to a concert of glorious music, others cower in a basement as bombs are dropped as part of some ceaseless war.

In “Guards at the Taj,” now at Steppenwolf Theatre (where director Amy Morton has remounted her 2015 world premiere production by New York’s Atlantic Theater Company), playwright Rajiv Joseph explores this phenomenon by spinning a story that contrasts the radically opposing instincts of a megalomaniacal ruler. He is a man who, in the name of love and remembrance, commissions an architect to create the most beautiful building ever constructed. He also is the man who then orders the nightmarish savaging of the very people who created that building so that no one can ever build anything that might rival it.

As it happens, we never meet the ruler. Rather, we meet two relatively youthful royal guards – Humayun (Omar Metwally) and his childhood friend, Babur (Arian Moayed) – whose job is to stand in front of the massive protective wall that has shielded the construction site from the view of all but the architect and his 20,000 artisans who have worked on the building over many years. (Tim Mackabee’s set is masterful and fearsome.) 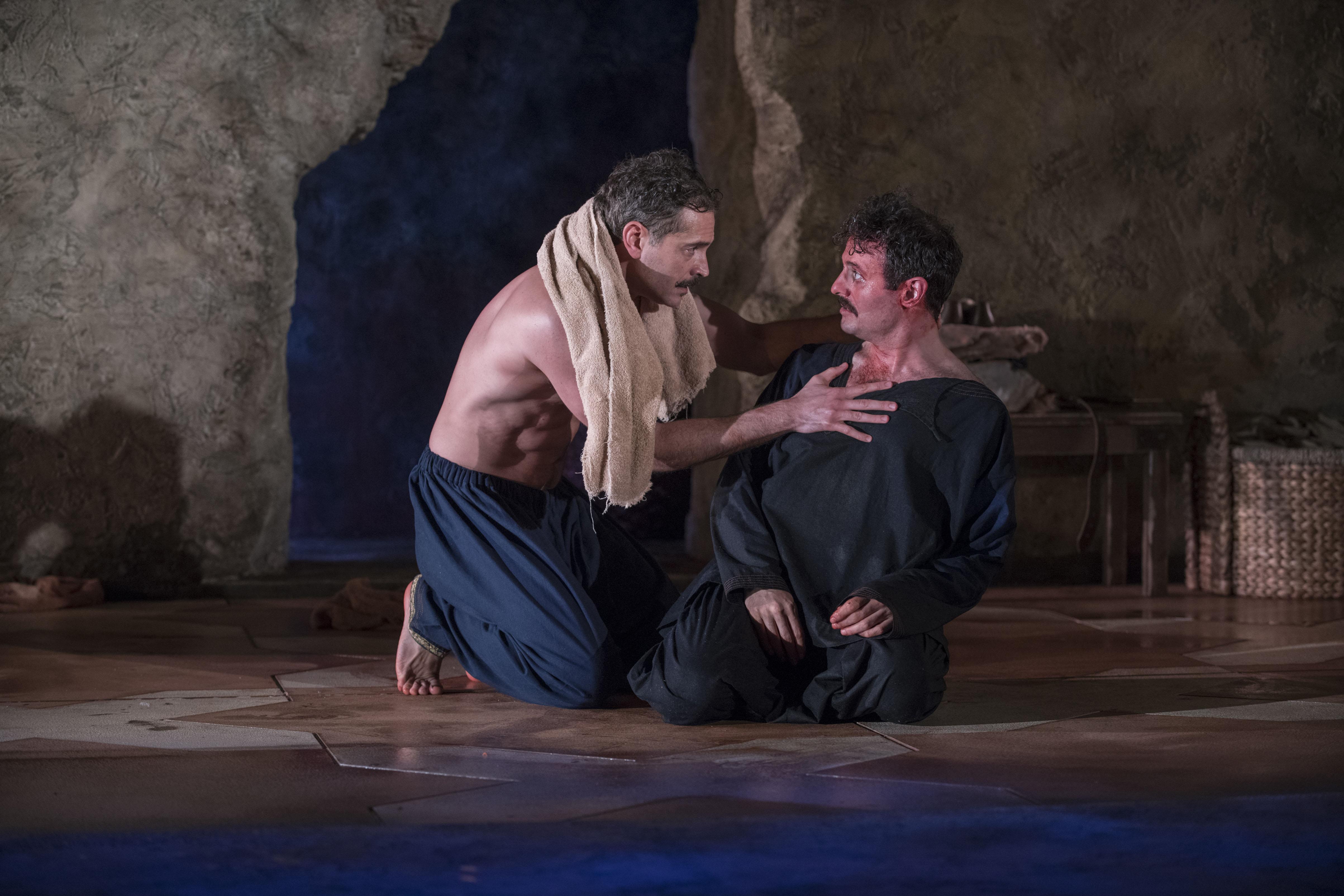 As it happens, the building behind that wall is the Taj Mahal, the enduring masterpiece of Mughal (Muslim) Indian architecture commissioned in 1632 by the Emperor Shah Jahan as a mausoleum for his most beloved wife, and designed by the architect Ustad Ahmad Lahauri.

Although over the years rumors have persisted that at the completion of the Taj Mahal in 1648 the emperor ordered that the many thousands involved with its creation were to have their hands amputated so that they could never build anything more beautiful, these rumors have remained entirely unsubstantiated. But given what we know of the mass slaughters and tortures perpetrated in just the past century alone, it is easy to see how Joseph could have seen their potential rightness as a metaphor for our own time.

The two guards he has imagined are a sort of Mutt and Jeff pairing, with Humayun the disciplined, order-obsessed son of a coldly judgmental father who is the head of the Imperial Guard, and Babur the more talkative, imaginative and dream-filled of the two. When the Taj is finally unveiled, they are commanded to keep their eyes focused on the crowd, never looking behind them to catch a glimpse of the completed building. But of course the temptation, particularly for Babur, is far too great. And both men, who have experienced the greatest beauty, will now be severely punished.

Babur is forced to chop off the hands of the 20,000 while Humayun is charged with cauterizing the bleeding stumps. We see them after the maniacal butchery has been done, wallowing in a room awash in blood, and with baskets filled with amputated hands. Both are traumatized, but Barbour is the most broken. 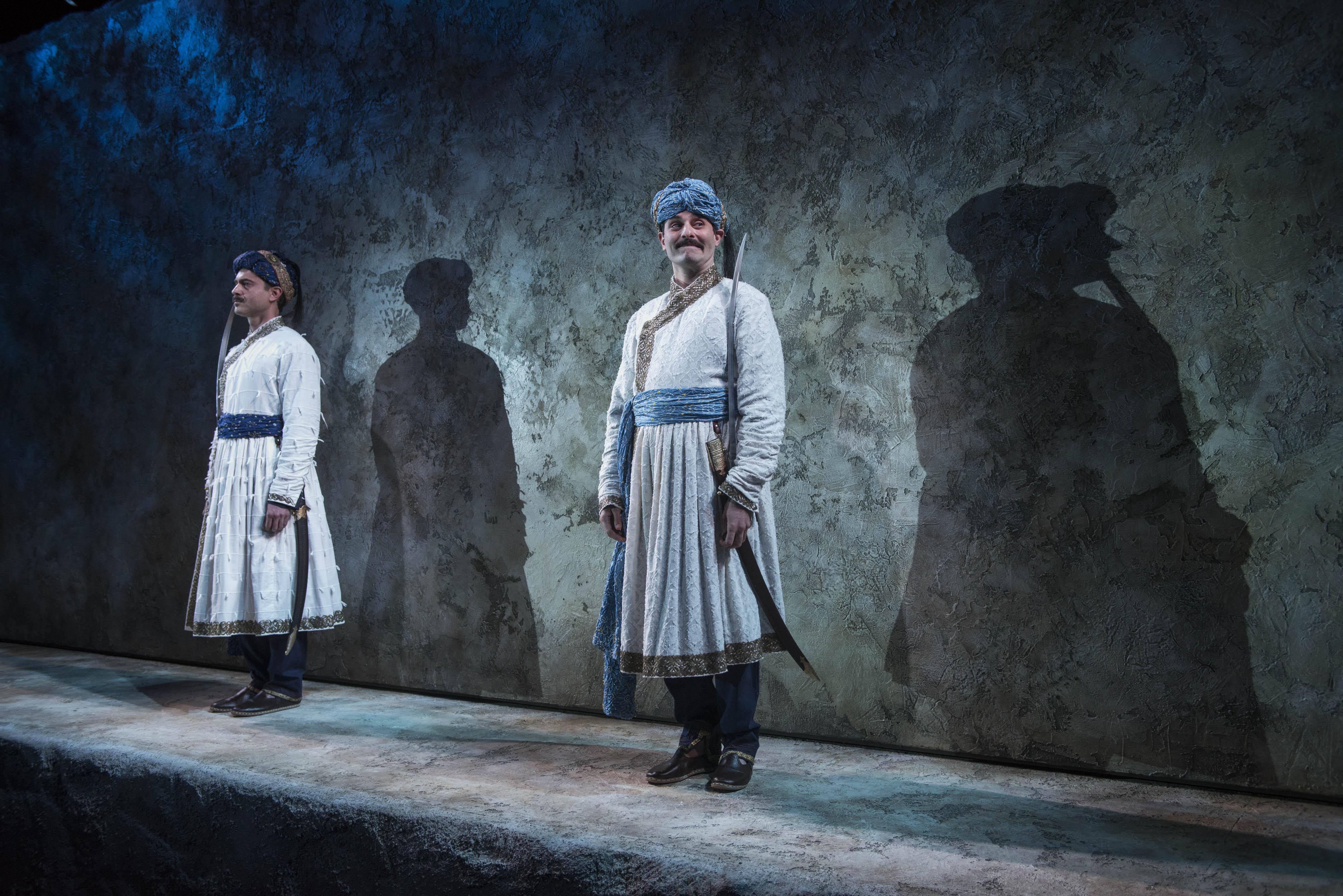 Joseph has given the men a sort of jokey contemporary speech and badinage that badly undercuts the drama (if not the full horror) of the story. Rather than bringing these characters closer to us, they feel trivialized. True, they are meant to be ordinary men at the bottom of the ladder in terms of job status. But they are only fully believable when Humayun declares (all too familiarly) that they were “just carrying out orders,” or when Babur explains his idea for a rocket-like machine that can fly to the stars in winningly poetic terms.

Of course Babur will end up as the victim of his own nightmare, and Humayun will continue to carry out orders. So goes the world.