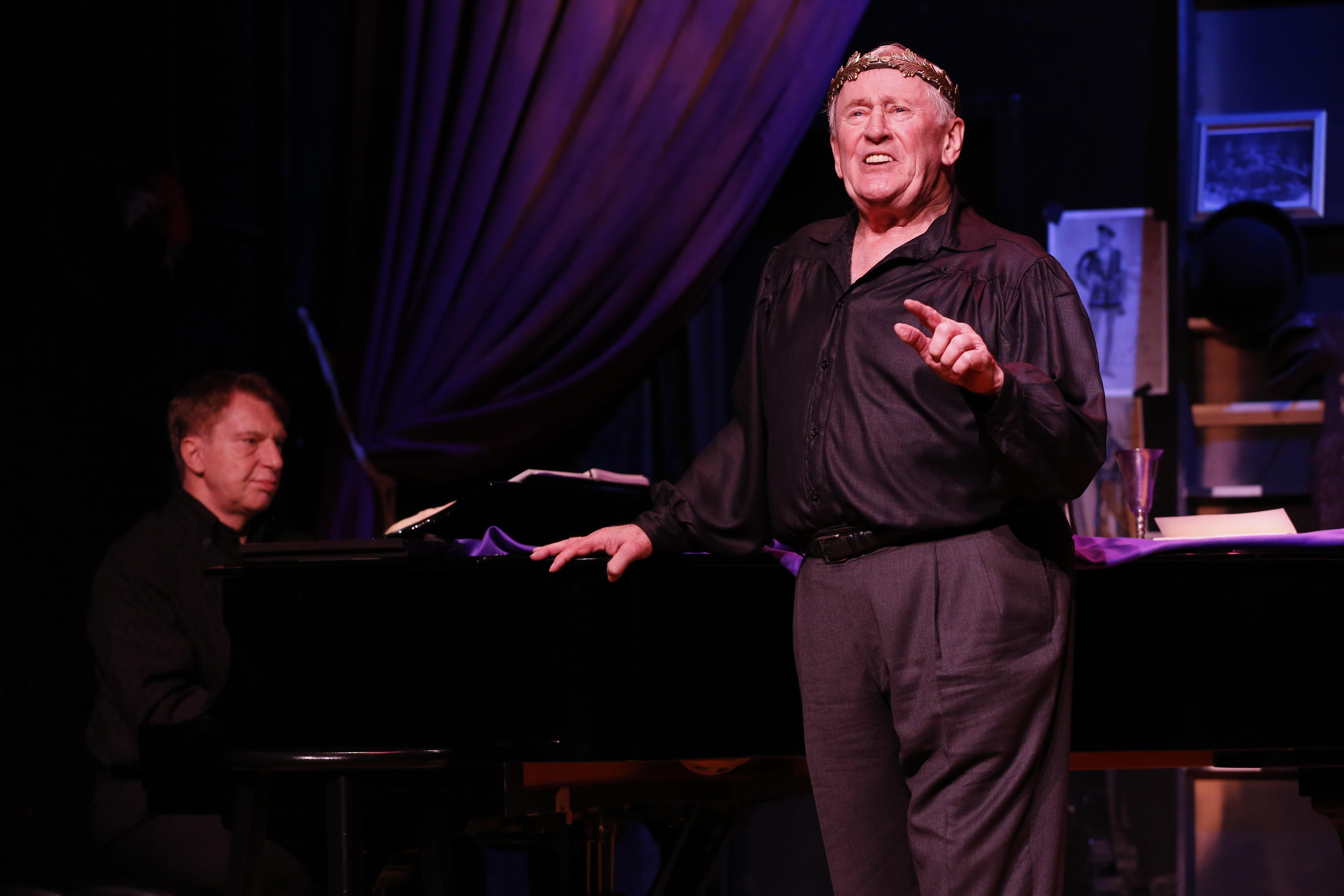 Len Cariou, right, and Mark Janas in “Broadway & The Bard.”

Infused with both a touch of genius and a most winning bit of irreverence, “Broadway & The Bard,” the one-man show helmed by theatrical legend Len Cariou, is an inspired piece of cultural mix-and-match.

The production, which has arrived here somewhat under the radar, is being performed in the intimate confines of a decidedly off-Loop venue, Stage 773, where it will run through Sunday only. But it is such a natural for the Upstairs stage of the Chicago Shakespeare Theater that audiences who can’t make it to the show this time around should begin a campaign to bring it there.

The 78-year-old, Canadian-born Cariou – an actor of exceptional breadth and experience (perhaps best known for originating the role of Sweeney Todd on Broadway) – brings both a youthful enthusiasm and worldly wise sensibility to what is clearly a labor of love. But before going any further I should issue something of a spoiler alert here for the show, which has been conceived by Cariou in collaboration with the award-winning lyricist/director Barry Kleinbort, and music director Mark Janas (the actor’s invaluable piano accompanist and occasional scene partner), is driven by a very particular conceit.

A good portion of the fun in this exceedingly clever 85-minute piece has to do with being surprised by the invariably brilliant “call and response” that happens between the wide-ranging passages chosen from Shakespeare’s comedies, tragedies and histories, and the Broadway songs that are then used to so wittily comment, counterpoint or amplify them.

So you’ve been warned. But the truth is, it is all but impossible to resist the temptation to reveal some of the pairings. 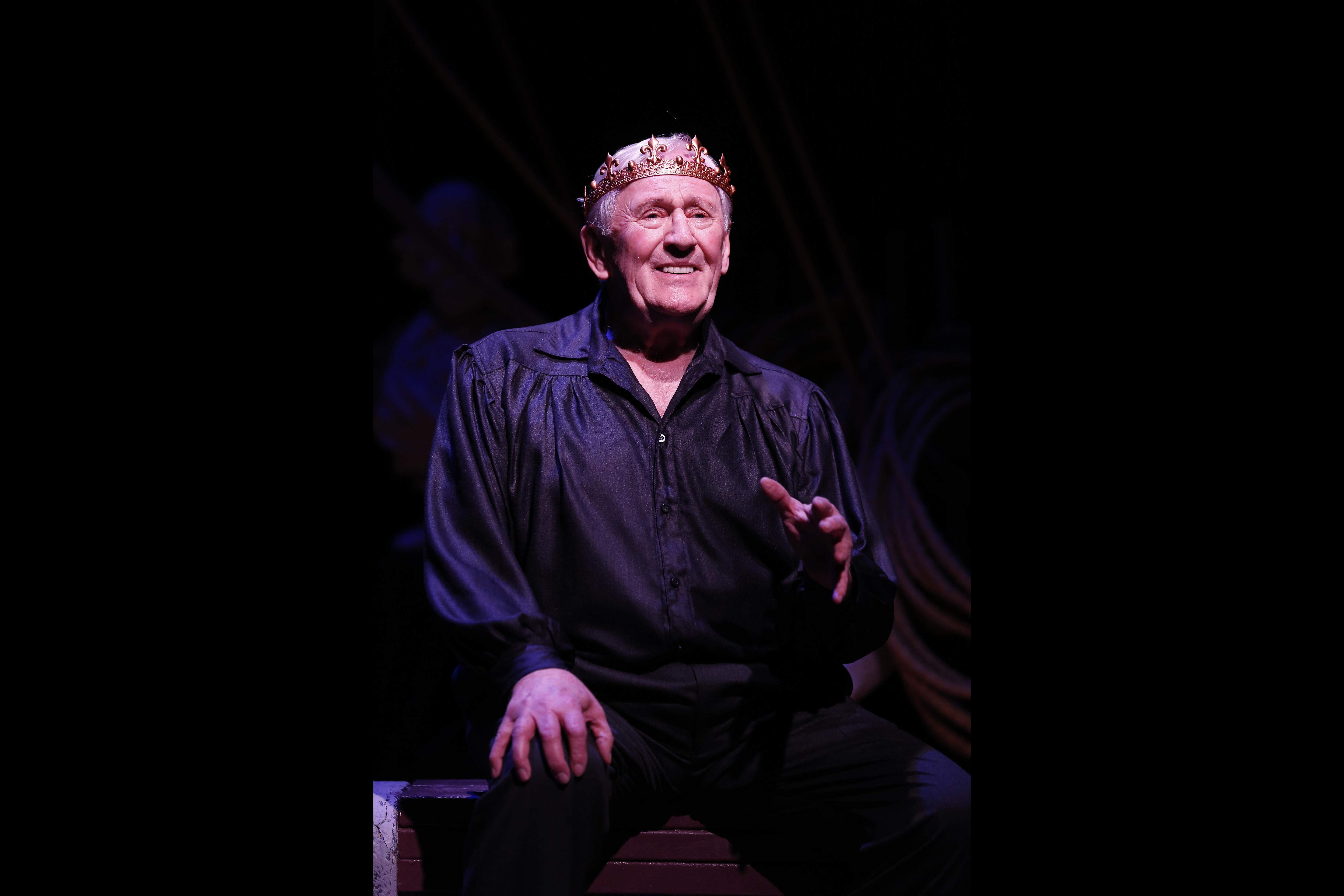 Len Cariou in “Broadway & The Bard.”

To start, there is the speech by the lovesick Duke Orsino in “Twelfth Night” whose words about emotion-triggering music are followed by both “Love, I Hear” (Sondheim’s song for the naive young fellow in “A Funny Thing Happened on the Way to the Forum”), and the more jaded “Falling in Love with Love” (the Rodgers and Hart song from the Shakespeare-inspired musical, “The Boys from Syracuse”).

Then comes the rousing speech to the troops made by the young king in “Henry V,” followed by the hilarious, ego-puncturing choice of “Applause” by Charles Strouse and Lee Adams. Another Shakespearean king also gets the Cariou treatment as the rather weak and beleaguered “Richard II” has his say and the actor counters with “If I Ruled the World” by Cyril Ornadel and Leslie Bricusse.

Cariou moves on to play the macho Petruchio in “The Taming of the Shrew” and the gets some of the biggest laughs when he then launches into King Arthur’s decidedly “woke” song, “How to Handle a Woman,” from Lerner and Loewe’s “Camelot.”

Turning to “Julius Caesar,” the actor gives us a fine rendering of Marc Antony’s conflicted funeral oration and tops it with another inspired musical choice – “Something Wonderful,” also a tribute to a difficult but “honorable” man. (It is meant to be sung by Lady Thiang in Rodgers and Hammerstein’s “The King and I.”)

And then there’s King Lear, who unwisely carves up his kingdom and gives it to two of his evil daughters only to have the greatest sense of regret. Another hilarious refrain has been chosen as commentary here (and you can almost imagine the show’s creators cheering when they thought of this one), as Cariou breaks into “Reviewing the Situation,” Fagin’s song from Lionel Bart’s “Oliver.”

The “seven ages of man” speech from “As You Like It” is wistfully paired with the Kurt Weill-Maxwell Anderson classic, “September Song.” Cariou finds the perfect companion piece for Prospero, the exiled monarch in “The Tempest,” by returning to Sondheim’s “Sweeney Todd.” And finally he brings the whole show to a joyous close with a zesty performance of Cole Porter’s raucously rhymed “Brush Up Your Shakespeare.”

It is often said that were Shakespeare alive today he’d be making movies. I happen to think he’d be penning Broadway musicals. This show offers ample proof of the possibility.