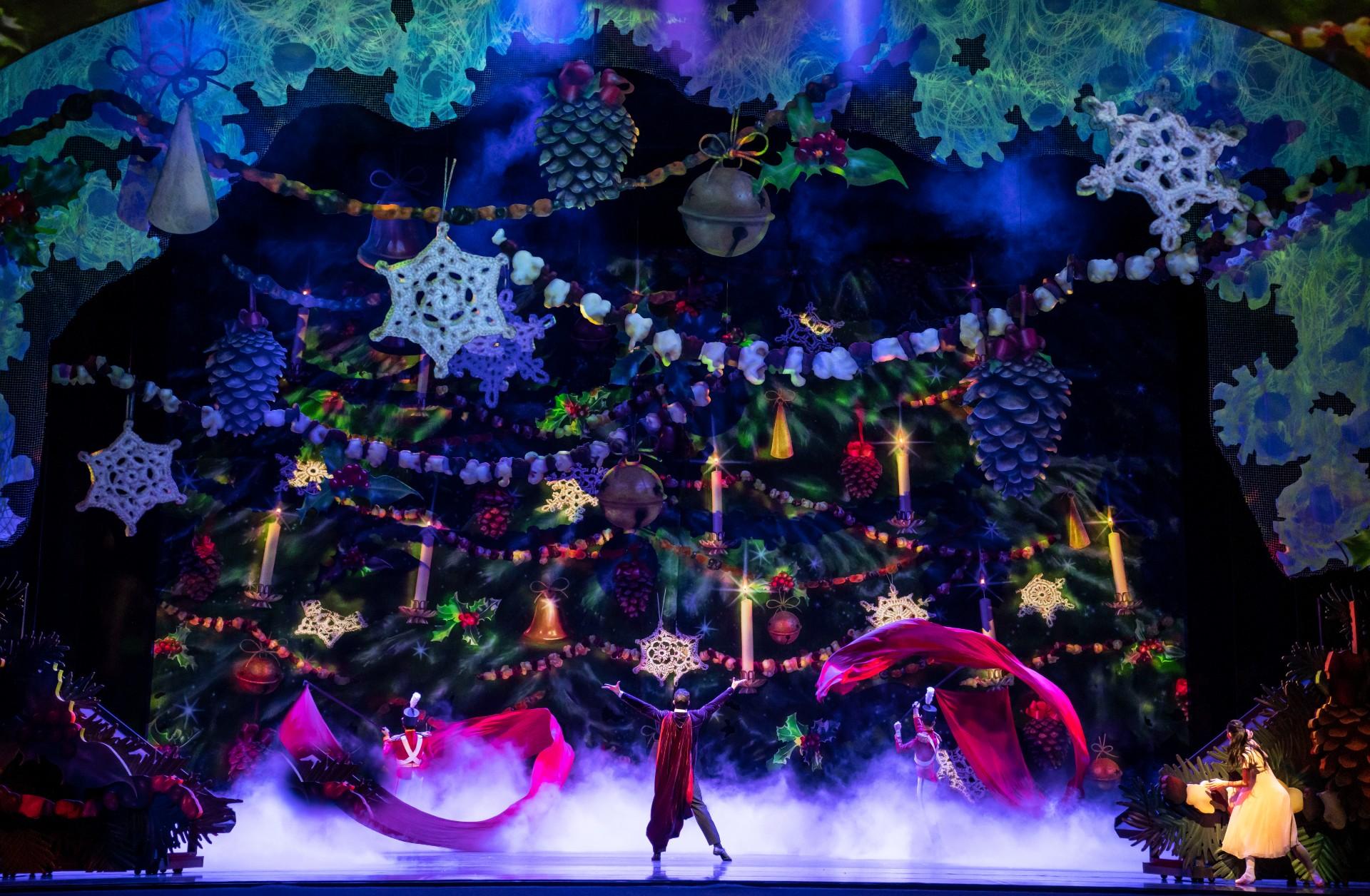 The Joffrey Ballet’s “The Nutcracker.” (Photo by Todd Rosenberg)

Pure, grand-scale magic. That (in a nutshell, and pardon the pun) is the only way to describe the Joffrey Ballet’s glorious production of “The Nutcracker,” which breaks the mold of the traditional version by being set against the grandeur of Chicago’s 1893 World’s Fair – a true turning point in the city’s history, that notably drew an immigrant population that was crucial to its construction, and devised such wonders as the Ferris Wheel.

One of the most beloved and widely performed classical ballets, set to Tchaikovsky’s iconic score, the Joffrey production of “The Nutcracker,” which had its world premiere in 2016, is the ingenious creation of choreographer Christopher Wheeldon (who was in town for several days last week to oversee rehearsals and take a bow at the opening), along with writer Brian Selznick. The two joined forces to put a beautifully reimagined twist on the original story in collaboration with a wildly gifted team of designers. And from the very start it has been brought to vivid life by a company of dancers whose acting skills ideally match their exceptional dance technique. (It is worth noting that while this season has seen the retirement of nine members of the company, many of its stellar dancers are still at work, and the new arrivals – four from the U.S and five from as many different countries – have made a seamless entrance.) 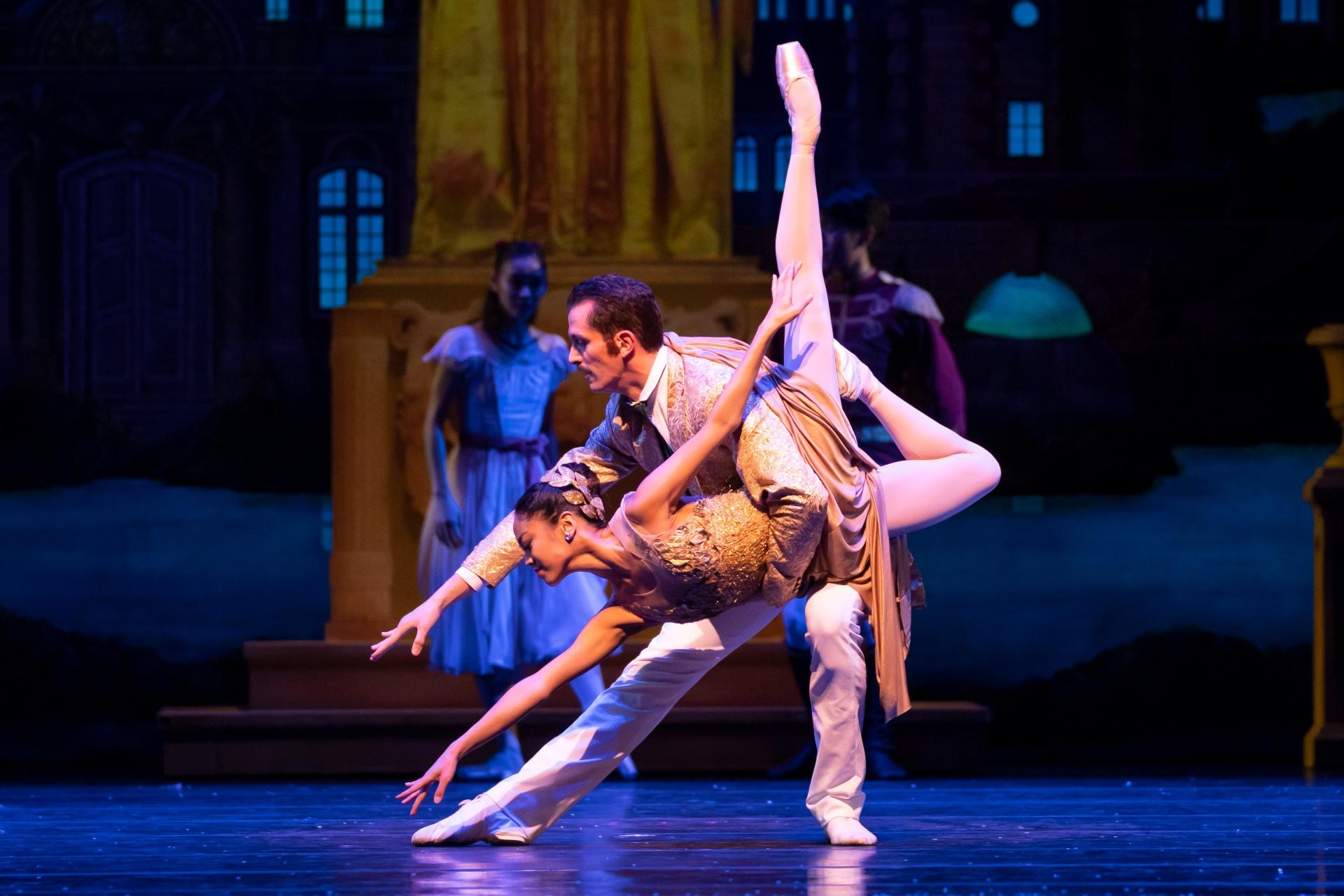 Jeraldine Mendoza and Dylan Gutierrez perform in the Joffrey Ballet’s “The Nutcracker.” (Photo by Todd Rosenberg)

The story that unfolds here begins in the temporary shack outside the fairgrounds that is home to Mother (exquisitely danced by Jeraldine Mendoza), the immigrant sculptor at work on a model of what will become the fair’s towering gilded bronze figure, the Statue of The Republic. She shares her studio with her two children – the lovely Marie (in a winning portrayal by Yumi Kanazawa), and Marie’s exceedingly mischievous younger brother, Franz (in an ideal portrayal by Elliot King).

Arriving at a Christmas party in this studio are many of the fair’s artisans, as well as the flamboyant Great Impresario of the Fair (the formidable Dylan Gutierrez, in the role that suggests Daniel Burnham, the fair’s visionary chief architect. The man is clearly captivated by Mother, and works his magic on her children with his gift of a Nutcracker Soldier, later deftly arrives in life-size form as was danced by Zachary Manske). The soldier springs to full life in Maria’s dream and battles against the villainous Rat King (the ever-entertaining Edson Barbosa, who also portrays the much-needed Rat Catcher on the fairgrounds. Meanwhile, the Impresario’s apprentice, Peter (in a most winning, ideally danced portrayal by Hyuma Kiyosawa), falls in love with Marie.

Dreams are eventually enveloped in snow, and a great stone gondola, helmed by the Impresario, takes Peter (now Prince Peter) and Marie to the site of the fair where they visit the many international pavilions and are treated to the performances of an engaging Chinese dancer (Wictor Hugo Pedroso), Spanish dancers, Venetian masked dancers and the lasso-spinning antics of Buffalo Bill (Valentino Moneglia Zamora) and his Wild West Show. 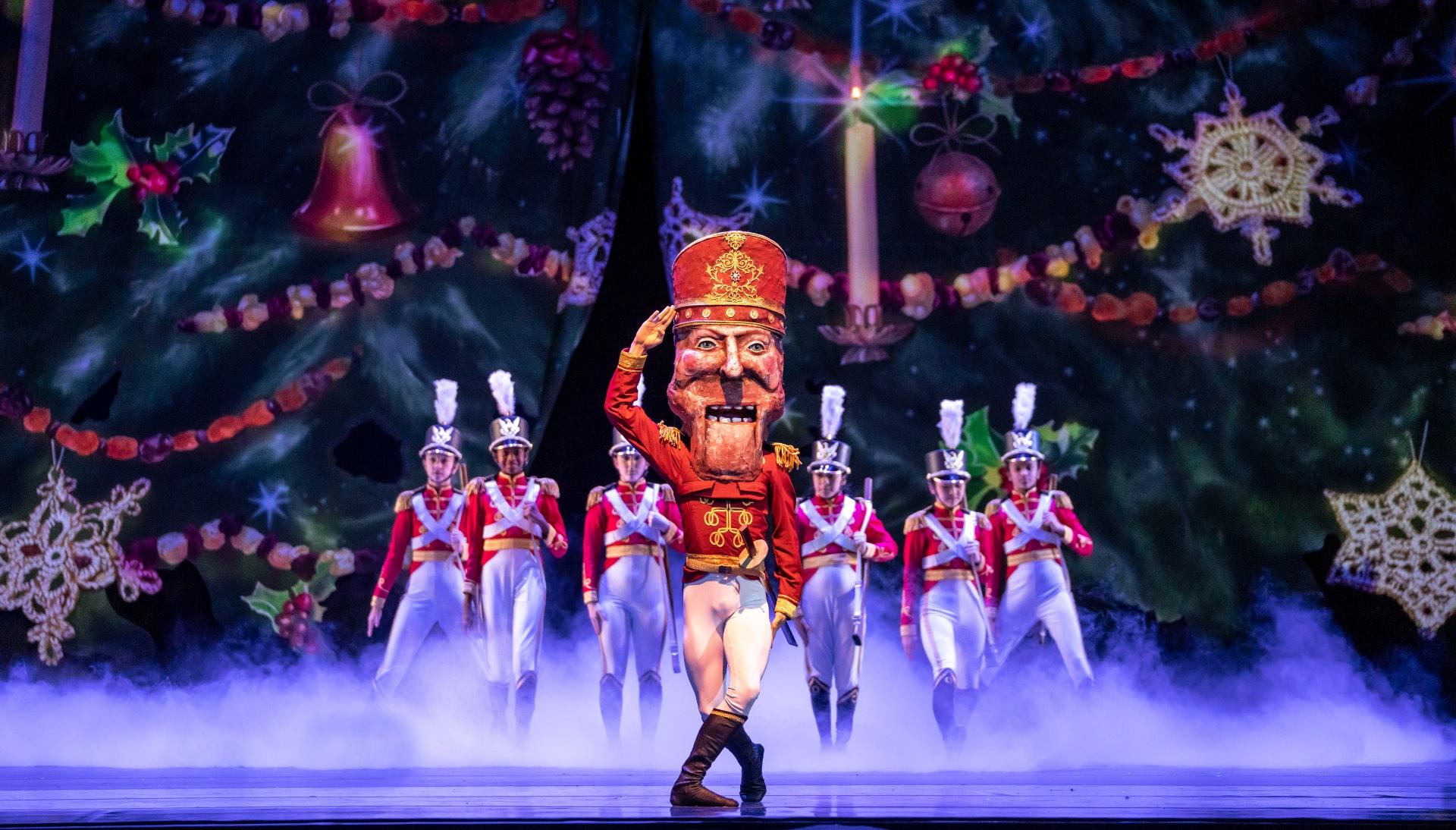 The Joffrey Ballet’s “The Nutcracker.” (Photo by Todd Rosenberg)

But it was the spectacularly sensual and acrobatic pas de deux of the Arabian dancers (with the ever-breathtaking Victoria Jaiani, expertly partnered with Barbosa), who generated a deservedly wild response from the audience.

In the ballet’s second act, Mother has been transformed into the Queen of the Fair and engages in a passionate duet with the Impresario. It was beautifully danced by Mendoza and Gutierrez (who happen to be a real-life, recently married couple).

Not to be overlooked in this production are the many other dancers in its vast cast, as well as a great gathering of child performers who play everything from naughty boys, to snowflakes, to snappy, laugh-inducing walnuts. (The audience for this ballet is invariably full of children, too, and they clearly were mesmerized throughout.)

Along with the dancers, the great beauty and humor of this production is the work of its brilliant design team. Julian Crouch’s lavish sets, masks and costumes not only capture the Art Nouveau style of the period, but blend stunningly with the architecture of the Lyric theater itself. And the ever magical lighting of Natasha Katz, the laugh-inducing puppetry of Basil Twist, and the stunning projection design of 59 Productions is an essential addition to the beauty and magic. 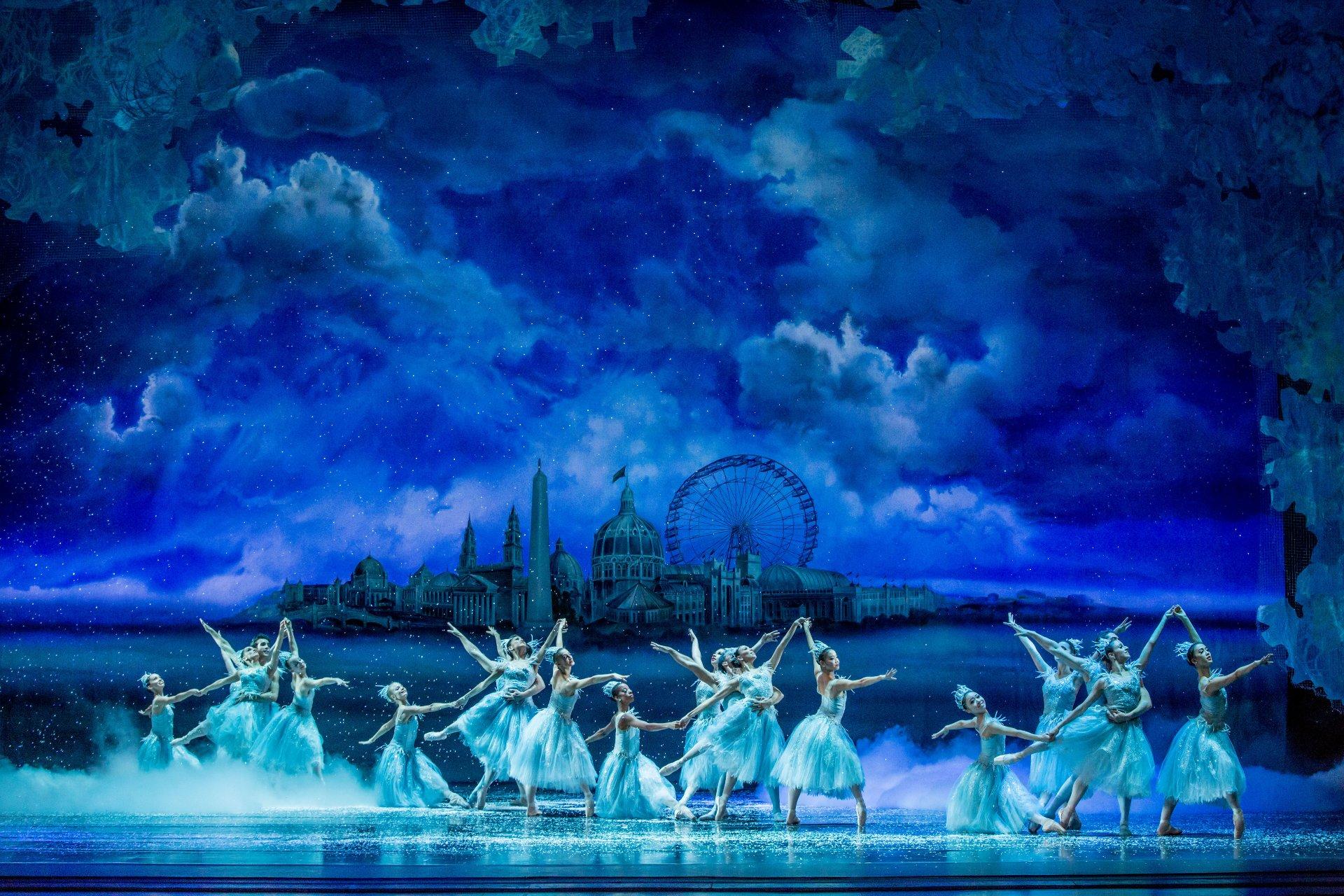 The Joffrey Ballet’s “The Nutcracker.” (Photo by Cheryl Mann)

Last, but by no means least, there is the absolutely essential work of the Lyric Opera Orchestra’s superb musicians and the matchless artistry of conductor Scott Speck, who partners with every phrase of the dancers and is an invaluable part of every Joffrey endeavor.

“The Nutcracker” (which will have varying cast lineups) runs through Dec. 27 at the Lyric Opera House, 20 N. Upper Wacker Drive. For tickets, visit Joffrey.org/Nutcracker or call (312) 386-8905.

Note: Signature scenes from this production are being shown in digital art projections format nightly (at 7:30 and 8 p.m.) on the facade of the Merchandise Mart (Wacker Drive between Wells and Franklin). For details visit, artonthemart.com/programming.

And, looking ahead to the opening of the Joffrey’s 2023 season, be sure to mark your calendar for the return of “Anna Karenina,” choreographer Yuri Possokhov’s ballet inspired by the Leo Tolstoy masterpiece. It will run Feb. 15-26 at the Lyric.