Three mayors in the past 15 years — Richard M. Daley, Rahm Emanuel and Lori Lightfoot — have all promised to combat the effects of global climate change. But some critics and scientists, along with a new data analysis by the DePaul University Center for Journalism Integrity & Excellence, reveal their efforts have fallen short.

Starting in 2008 with the Daley administration’s Chicago Climate Action Plan, the goals were sweeping and bold. Seventy-two actions mapped out a way to transform the city’s environment by reducing industrial pollution, preventing flooding and planting a million trees, all by 2020.

“I’d say a lot of [the goals] were dashed,” said Suzanne Malec-McKenna, one author of the plan.

Three years into the plan, Chicagoans elected a new mayor.

In 2011, Rahm Emanuel disbanded Chicago’s Department of Environment, including the position of commissioner. In a recent phone interview, Emanuel argued he found more efficient and economical ways for environmental goals to be met by other city departments, including, he said, closing two coal fired plants in Pilsen and Little Village.

“I think there was certainly less interest on Mayor Emanuel’s part, to actually try to continue [the 2008 plan],” said Don Wuebbles, a professor emeritus of atmospheric sciences at the University of Illinois and co-author of the 2008 plan. “It’s not that he [Emanuel] was anti-environment, it was that it was not his primary objective that he really pushed forward.”

One of the plan’s goals was to sharply reduce greenhouse gas emissions.

“The premise of the climate action plan was to reduce our emissions by 80% below 1990 levels by 2050,” Malec-McKenna said. “And in order to do that there’s, there’s a lot of movement that needed to happen … It was cut off so that didn’t happen.”

Lori Lightfoot, when campaigning for mayor in 2019, pledged to resurrect the Department of Environment. Two years into her administration, she has yet to fulfill that campaign promise.

Instead, she appointed Angela Tovar chief sustainability officer as point person for the environment. It is not a commissioner-level position and does not carry with it a department.

Executive Director of the Little Village Environmental Justice Organization (LVEJO) Kimberly Wasserman says she has a good working relationship with Tovar. “She can only do so much as one person,” Wasserman said. “She needs a staff, she needs to have power.”

Activists like Wasserman are asking that Lightfoot reinstate the Department of Environment. “It hasn’t happened,” Wasserman said.

“The Department of Environment takes time to redevelop,” said Tovar. “We want to work with community members and leaders to really evaluate how we can best serve people on the environment.”

“We’ve been asking for environmental justice reforms. It has not happened,” Wasserman said. “They can hear us all they want, but whether or not they take action on what we say is a completely different thing.”

“[This] represents the largest one-time investment in climate mitigation, adaptation and environmental justice priorities in the city’s history,” Lightfoot said.

“We are calling that our down payment,” said Tovar. “We acknowledge that there is more money that needs to come.”

The 2008 Chicago Climate Action Plan promised to plant an estimated one million trees by 2020. According to data provided by the city and the Chicago Park District analyzed by the DePaul University Center for Journalism Integrity & Excellence, fewer than 77,000 trees were planted over that 12-year period. This leaves the city at less than 10% of its initial goal.

Related: Where Does the City Plant Trees? A Ward-by-Ward Analysis

Now, the Lightfoot administration has set a new goal. Included in her budget is $46 million to plant 75,000 trees over the next five years.

Such a goal would require the city to plant 15,000 trees a year. Yet, during 2020 — the first full year of the Lightfoot administration — only 6,400 trees were planted, according to documents provided by the city.

The Future of Climate Action

As the Great Lakes’ climate warms, researchers say more rain will fall in the spring and winters will shorten, increasing the likelihood for flash floods.

Chicago’s Little Village neighborhood has experienced a great deal of flooding, wrecking basements and blocking walkways, according to Wasserman.

“When it rains, you have intersections, crosswalks [and] house basements that are continually flooding,” said Wasserman. “People are dealing with flooding on a regular basis in our neighborhood.”

However, the city says there is no resource currently in place to help residents deal with flooding in their homes.

“So we do not have a program right now,” Tovar said. “What we can do is continue to push for that program.”

“There’s no question this is one of the most important issues facing humanity,” he said. “And Chicago needs to know how to deal with its future.”

One thing is certain — climate change proposals and policies have blown through the Windy City with successive mayors, switching directions on how best to handle environmental issues. Until policies carry the force of law, advocates argue Chicago risks seeing a pattern of broken promises. 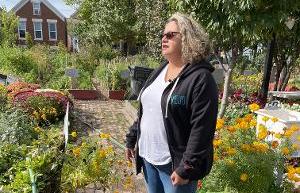 Kimberly Wasserman was born and raised in Chicago’s Little Village neighborhood, raising awareness about the damage of coal-fired plants before her 2005 appointment as executive director of the Little Village Environmental Justice Organization (LVEJO) .

“I entered this work because my 3-year-old couldn’t breathe and had asthma,” she said. “I’ve since had two more children, and all three of them are asthmatic. I continue in this work, because I don’t want to see other families go through that.” 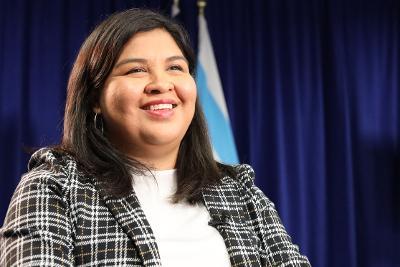 “If my 95-year-old grandmother who lives on the Southeast Side doesn’t feel that investment,” Tovar said. “If she’s not aware that the city is making this climate commitment — because she doesn’t see new trees or improved air quality — then we fail.”

How Do Chicago’s Buildings Fare in Energy Use?

The organization developed an Energy Star Rating, with a 1-100 scale that indicates whether or not a building meets federally-mandated efficiency guidelines. Buildings that meet Energy Star standards save energy, money and protect the environment by generating less greenhouse gas emissions than typical buildings according to Energy Star.

According to the 2008 Climate Action Plan, approximately 70% of all greenhouse gas emissions come from the city’s buildings.

An Energy Star score of 50 represents median energy performance, while a score of 75 or higher indicates a building is a top performer and may be eligible for Energy Star certification.

The data then goes through a verification process before it is assessed for an Energy Star score.

In 2019, 91% of Chicago properties reported under the ordinance. According to city data, the reporting properties represent approximately 20% of total citywide carbon emissions.

The city’s 2019 report shows that properties reporting for three or more years in a row have saved an estimated $24.6 million per year from energy reductions, resulting in $74 million in cumulative savings since 2016.