WASHINGTON (AP) — It was June 2015, and Democrats felt the nation’s political and cultural winds blowing their way. The Supreme Court ruled in President Barack Obama’s favor on landmark gay marriage and health care cases. The White House was awash in rainbow light, a symbol of a liberal cultural takeover that seemed unstoppable.

The following year, Donald Trump was elected president, propelled by a revolt of voters who weren’t on board.

As he barrels toward the November election, Trump is again positioning himself as the spokesperson for voters resisting a new wave of cultural change, ready to ride any backlash from the protests calling for racial equality and police reform and last week’s Supreme Court rulings extending protections to gay workers and young immigrants.

“THE SILENT MAJORITY IS STRONGER THAN EVER BEFORE,” Trump tweeted Friday, aligning himself with those who believe their voices are increasingly missing from the national dialogue.

In truth, Trump has never had support from a majority of Americans, nor has he seen a political imperative in trying to. He lost the popular vote to Hillary Clinton in 2016 but offset that by boosting turnout in crucial Midwestern battleground states among disaffected, largely white, voters. That’s the same narrow path he’s trying to replicate against Democrat Joe Biden.

Yet Trump’s efforts to harness the culture wars to mobilize many of those same voters in 2020 may be more difficult than it was four years ago. Polls show that some of the cultural shifts that took hold during Obama’s presidency have continued during Trump’s tenure, signaling that his election alone couldn’t hold back the evolving views of an increasingly diverse nation.

As a result, Trump has found himself out of step in recent weeks, even with some of his usual allies.

For example, polls show the majority of Americans support the nationwide protests over police brutality — demonstrations Trump threatened to crack down on by deploying the military. The outcry prompted the NFL to shift its position and apologize for not supporting players who protested police bias by kneeling during the national anthem, abandoning Trump on that debate.

Last week’s Supreme Court rulings also put the Trump administration — which argued against extending federal employment protections to LGBTQ Americans and in favor of rescinding deportation protections for immigrants known as “Dreamers” — on the opposite side of the vast majority of Americans. 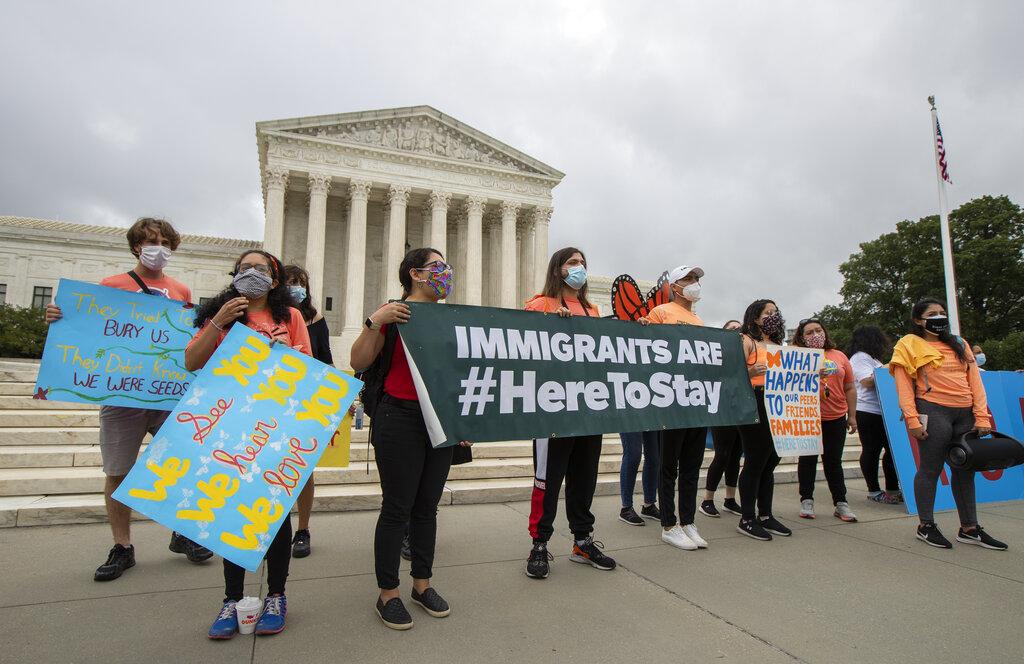 A CBS News poll conducted earlier this month showed 82% of Americans believe gay people should be protected under civil rights laws. The same survey showed 85% of Americans say the “Dreamers” — young immigrants brought to the U.S. illegally as children — should be given legal status. Trump has said he’s open to legal protection for them but still sought to rescind their current protections to gain leverage in any immigration negotiations in Congress.

Yet some of Trump’s supporters believe the nation is in a similar place to where it was during those heady days for liberals in 2015, with cultural trends and even court decisions papering over deep resentment and unease among many Americans.

“There is a mob mentality out right now that if you don’t agree with what certain people want you to think, they attempt to shame and silence people,” said Jenny Beth Martin, co-founder of the Tea Party Patriots. “Yet when you go to the voting booth, you’re going to vote the way you want to.”

Some of the president’s advisers privately acknowledge that many of the base voters Trump is appealing to aren’t representative of the majority of the country. They are instead banking on those Americans being more fervent, more likely to donate to his campaign, to show up at rallies, and most importantly, to vote in November than Democrats or independents.

“There is going to be a massive turnout from people who see this cancerous political correctness coming from the major media companies, the social media companies, all of the elite institutions, including the Supreme Court,” said Matt Schlapp, chair of the American Conservative Union and a Trump ally.

The president has made clear that as he embraces the culture wars in the months leading up to Election Day, he’ll put the Supreme Court in his crosshairs. He said last week that he would soon release a list of contenders for any high court vacancies during his second term.

That’s the same move he made in 2016 as he sought to energize conservatives eager to tip the balance of power throughout the judicial system and offset what they argue are “activist” liberal judges. They’ve since cheered Trump’s two nominees to the Supreme Court, Neil Gorsuch and Brett Kavanaugh, and the 200 federal judges who have been confirmed during his term.

So last week’s rulings were a jolt for many Trump supporters, one some conservatives say was needed to show the president’s base that even more like-minded judges are needed.

“I can’t think of much else that fires up conservatives than the makeup of the Supreme Court,” said Jason Chaffetz, the former Republican congressman from Utah. “They’re willing to forgive a lot knowing that Donald Trump is going to do the right thing in picking conservative justices.”

Much of the conservative outrage over last week’s court rulings has centered on Chief Justice John Roberts, who was nominated by President George W. Bush and sided with the majority in both cases. But Roberts was joined in the LGBT employment case by Gorsuch.

To Democrats, the rulings — and particularly Gorsuch’s majority opinion on the gay rights case — were another sign that Trump is increasingly an outlier on political, social and legal matters, even in forums in which he seemingly has an advantage.

“What are they fighting for if Trump tries to enact his policies and they get overturned?” Jennifer Palmieri, a Democratic strategist who worked for Obama and Hillary Clinton, said of Trump supporters. “Trump has to worry about his base feeling like he’s ineffectual, even with a Trump Supreme Court.”