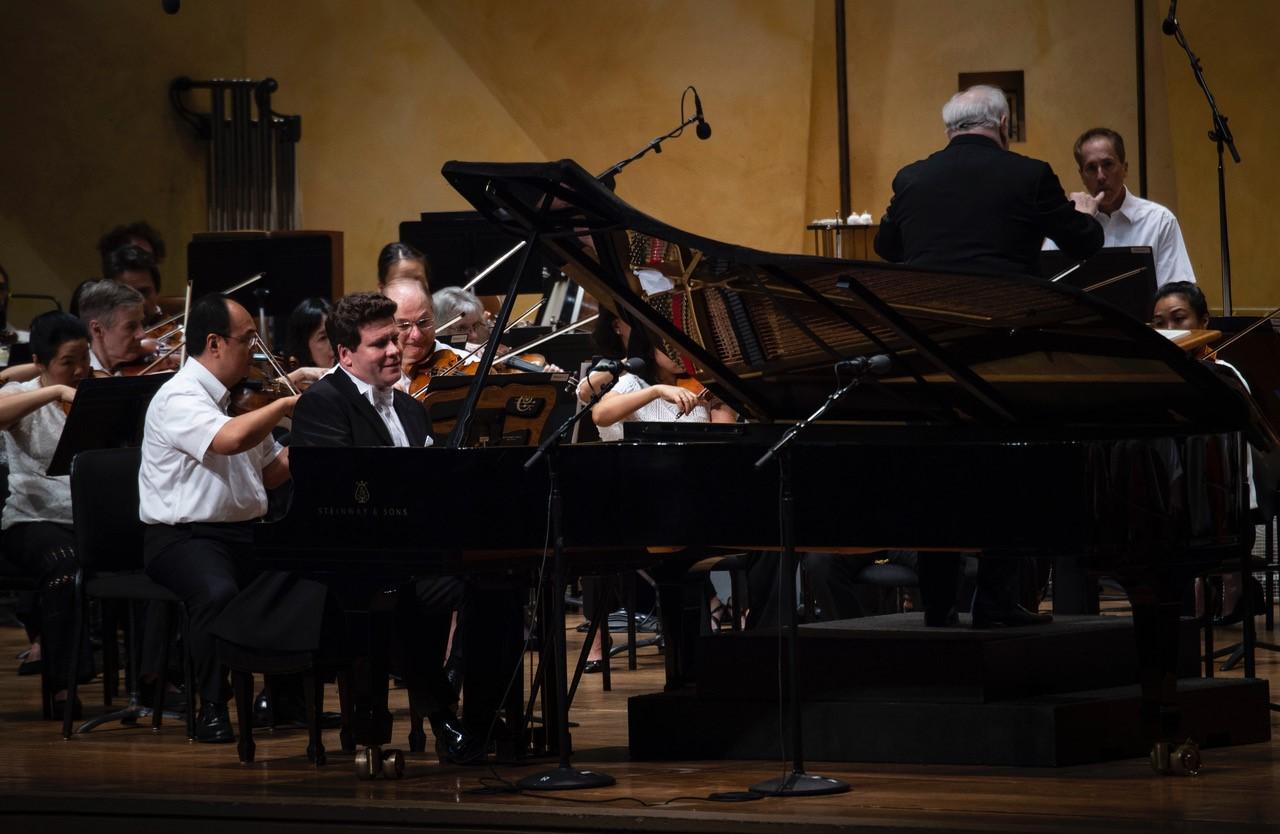 As an army of crickets decided to engage in one of its characteristics rackets, Denis Matsuev, the tall, powerfully built, 44-year-old Siberian-born pianist with a boyish grin strode onto the stage Wednesday at the Ravinia Festival along with the easily energetic 75-year-old conductor Leonard Slatkin.

And without a second of hesitation, the members of the Chicago Symphony Orchestra picked up their instruments, and Matsuev – backed by Slatkin’s precise, understated direction –launched into a spellbinding performance of Rachmaninoff’s “Piano Concerto No. 3.”

The concerto is awash in ravishing melodies and virtuosic thrills, and Matsuev brought such volcanic power, exquisite lyricism and absolute fluidity to the fiendishly demanding work that it felt as if he himself were writing the demonic piece on the spot. At the same time, the orchestra uncannily supplied just the necessary waves of sound needed to propel the whole vessel forward.

With Matsuev, Rachmaninoff (a similarly virtuosic pianist, who performed the debut of his own work in New York in 1909), has clearly found an ideal latter-day soul mate – one who can fully mesh the most muscular and romantic elements of the concerto. And don’t let the pianist’s big, strong hands fool you. The rippling speed, fluidity and lightness of his playing is astonishing, and thanks to the two large video screens on either side of the pavilion stage, the audience could get a close-up view of just how fleetly they moved. (Not surprisingly, the pianist has served as an artistic director of the Serge Rachmaninoff Foundation.)

The concerto, through which the piano plays almost nonstop, begins with great momentum, and Matsuev not only tapped into the subtly detectable Russian folk rhythms of the work, but at one point even suggested a slight hint of jazz (something he also has explored). Backing him at various moments were the excellent assistant principal bassoon (William Buchanan) and guest principal flute (Emily Skala), with fine work from the clarinets and horns as the pianist shifted seamlessly from hurricane force to the lightest, almost airborne sound. 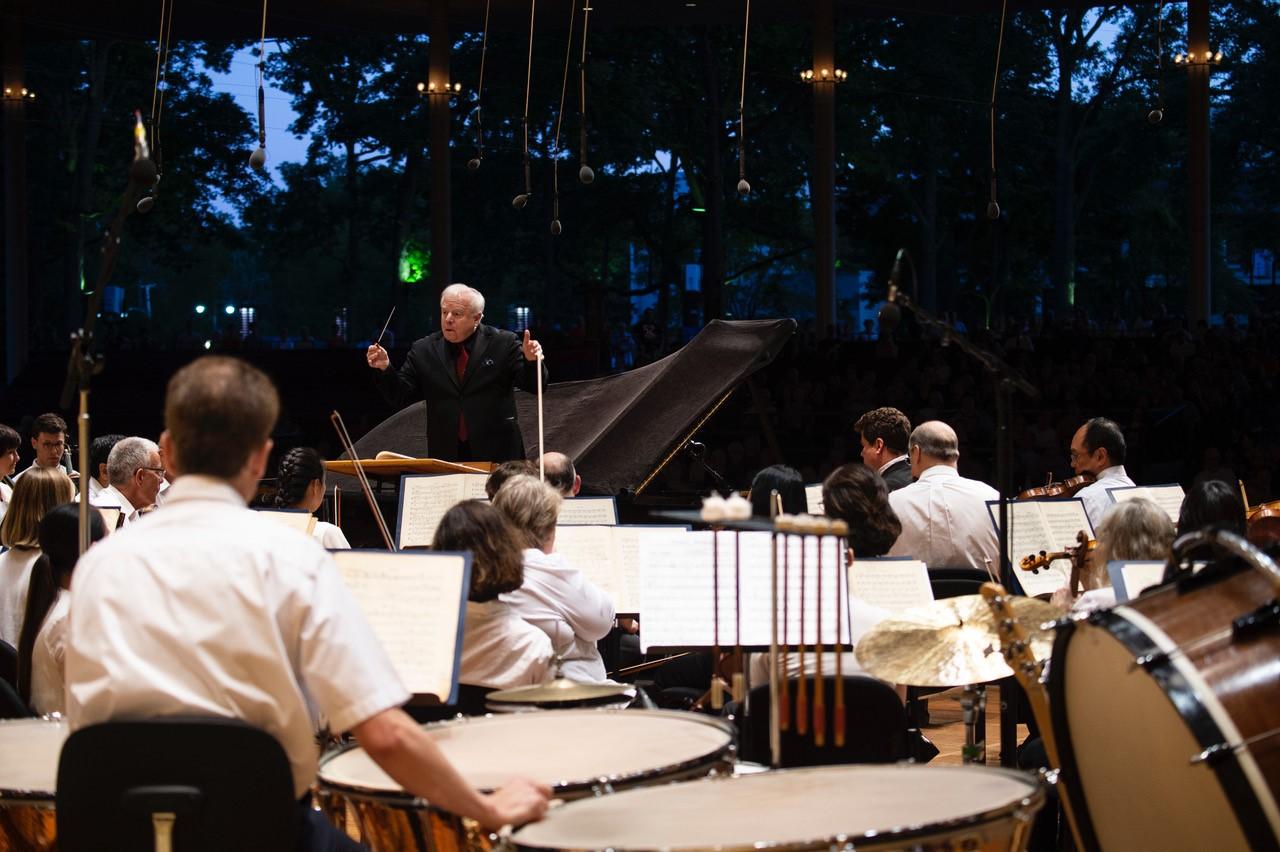 In the second movement, the strings played a plaintive tune, with the piano in a more contemplative mood until another storm took hold and then transitioned into a lush romanticism set against the grandeur of the full orchestra. But following close behind all that rapture was a sequence of intense agitation on the keyboard.

The work’s third and final movement had weight, but never felt heavy. And then at one point the driving quality of the music seemed to float into the ether before the timpani sounded a brief hum and the piano made a slow, thoughtful “landing.”

Throughout, Slatkin used his graceful hands and expressive face with admirable understatement, and he and the orchestra were in sublime synchrony with Matsuev.

The program’s second half was devoted to “Scheherazade,” the ever-popular symphonic suite by Rimsky-Korsakov. The Russian composer, also renowned as a masterful orchestrator, wove this work of exotically hued musical storytelling that moves from adventures at sea to those in the bedroom, with the use of the most seductive, sensually spiraling, Middle Eastern-inflected melodies. 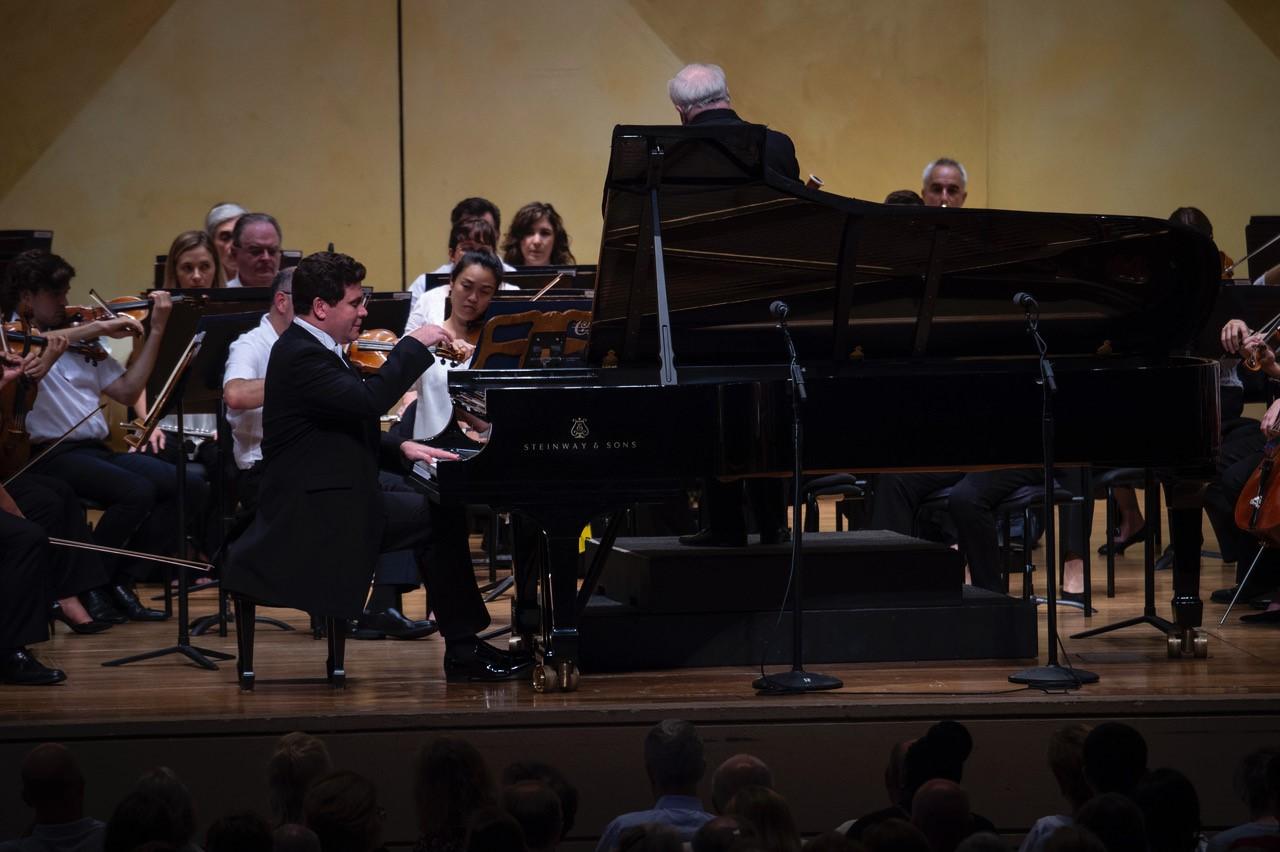 Lovely solo violin sequences by concertmaster Robert Chen combined with the full range of reeds, brass, harp and percussion (everything from triangle, tambourine and snare drum to gong and cymbals) to create a performance of great charm.

To bring the evening to a rip-roaring close, the buoyant Slatkin returned to the stage, and in the wake of a week of horrifying violence in this country, as well as a general sense of global upheaval, he noted that the CSO was comprised of people from 15 different countries who work together and solve whatever conflicts they might have peacefully. And he said this led him to ask himself why the wider world could not be like that, too.

He then proceeded to give the audience an irresistible cross-cultural treat as he led the orchestra in a performance of “Carmen’s Hoedown,” a work by his father, Felix Slatkin, a violinist, conductor and ingenious arranger who had the inspired idea of setting themes from Bizet’s opera to an all-American country beat. (Think “toreadors unite for a barn-raising.”)

The “fiddles” were joined by a banjo player, percussionist Cynthia Yeh had a grand ole time alternating between vibraphone and metal washboard, and great fun was had by all. Ole, and yee-haw!

For an extra treat, watch Matsuev perform with 6-year-old piano prodigy Yelisey Mysin for a performance of Rachmaninoff’s “Italian Polka.”