SPRINGFIELD, Ill. (AP) — Illinois’ new governor delivered on a top campaign promise Tuesday by signing legislation making the state the 11th to approve marijuana for recreational use in a program offering legal remedies and economic benefits to minorities whose lives critics say were damaged by a wayward war on drugs.

Legalization in Illinois also means that nearly 800,000 people with criminal records for purchasing or possessing 30 grams of marijuana or less may have those records expunged, a provision minority lawmakers and interest groups demanded. It also gives cannabis-vendor preference to minority owners and promises 25% of tax revenue from marijuana sales to redevelop impoverished communities.

“Today, we’re hitting the ‘reset’ button on the war on drugs,” Cassidy said.

Residents may purchase and possess up to 1 ounce (30 grams) of marijuana at a time. Non-residents may have 15 grams. The law provides for cannabis purchases by adults 21 and older at approved dispensaries, which, after they’re licensed and established, may start selling Jan. 1, 2020. Possession remains a crime until Jan. 1, a spokesman for Senate Democrats said.

Even then, you could get in a bit of trouble for, say, lighting a joint in a neighborhood park: cannabis use won’t be permitted in public places.

“The war on cannabis has destroyed families, filled prisons with nonviolent offenders, and disproportionately disrupted black and brown communities,” Pritzker said. “Law enforcement across the nation has spent billions of dollars to enforce the criminalization of cannabis, yet its consumption remains widespread.” 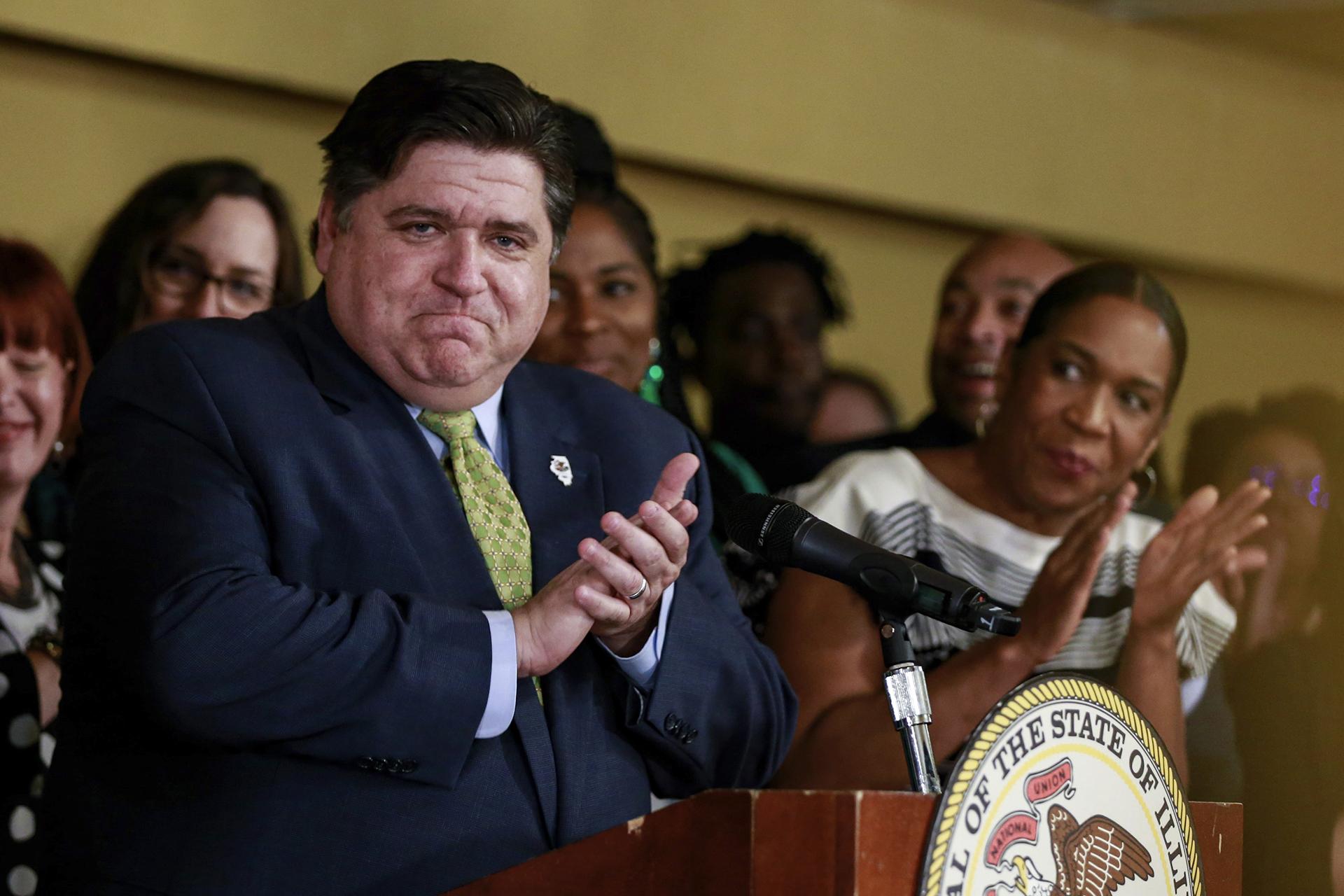 Gov. J.B. Pritzker takes in the applause before signing a bill that legalizes adult-use cannabis in the state of Illinois at Sankofa Cultural Arts and Business Center in Chicago. (AP Photo / Amr Alfiky)

On the campaign trail, Pritzker claimed that, once established, taxation of marijuana could generate $800 million to $1 billion a year. He said dispensary licensing would bring in $170 million in the coming year alone. But Cassidy and Steans have dampened that prediction, lowering estimates to $58 million in the first year and $500 million annually within five years.

Carrying the psychoactive ingredient THC, marijuana was effectively outlawed in the U.S. in 1937 and in the 1970s was declared a drug with no medicinal purpose and high potential for abuse.

Blacks have been most susceptible since then to “Just say ‘No’’’-era crackdowns. Pritzker quoted a 2010 statistic from the American Civil Liberties Union that while blacks comprise 15% of Illinois’ population, they account for 60% of cannabis-possession arrests.

Peoria Democratic Rep. Jehan Gordon-Booth summarized marijuana’s recent history as one where “white men would get rich and black men would get arrested.” The plan addresses those concerns with the criminal-record scrubbing by giving preference to would-be marijuana vendors in areas of high poverty and records of large numbers of convictions. And 25% of tax proceeds must be reinvested in impoverished communities, while 20% is dedicated to substance-abuse treatment programs.

“What we are doing here is about reparations,” Gordon-Booth said. “After 40 years of treating entire communities like criminals, here comes this multibillion-dollar industry, and guess what? Black and brown people have been put at the very center of this policy in a way that no other state has ever done.”

Police organizations are wary, concerned about enforcing driving under the influence laws and arguing technology for testing marijuana impairment needs more development. Law enforcement organizations fearing black-market impacts were successful in killing an earlier provision that would have allowed anyone to grow up to five marijuana plants at home for personal use. Police said they’d have difficulty enforcing that, so the bill was amended to allow five plants to be maintained only by authorized patients under the state’s medical marijuana law. They previously could not grow their own.

Ten other states and the District of Columbia have legalized smoking or eating marijuana for recreational use since 2012, when voters in Colorado and Washington state approved ballot initiatives. This year began with promising proposals in New York and New Jersey , but both fizzled late this spring. Despite a statewide listening tour on the issue by Pennsylvania’s lieutenant governor last winter, the idea never took flight.

Vermont and Michigan last year were the latest states to legalize marijuana. Vermont did so through the Legislature — the first time it wasn’t done through a ballot initiative — but while it allows residents to grow small amounts for themselves, it didn’t establish a statewide distribution system like Illinois did, licensing dispensaries. Other states license dispensaries too, but not all.

Illinois’ 55 medical-cannabis dispensaries get first crack at licenses to sell under the new law because they’re proven business concerns, Cassidy said. They may apply to dispense recreational pot at their current stores and for a license for a second location, meaning the state could have 110 recreational pot outlets by the time sales start Jan. 1. In October, the application period for 75 more dispensaries opens. No more would be allowed to open after that until the state conducts a review of the rollout.