Five local PBS news programs around the country, including “Chicago Tonight,” are examining marijuana legalization. This is the latest in our series of reports.

Marijuana laws are changing rapidly, but as of now, adults can use it recreationally in just 10 states.

That number more than triples when it comes to medical marijuana, which is legal in 33 states.

So which is it: A pleasure drug or a pharmaceutical one? And what difference does that make when it comes to regulating cannabis?

These are questions to consider as states like Illinois explore moving from a medical program to a more open-ended recreational one. 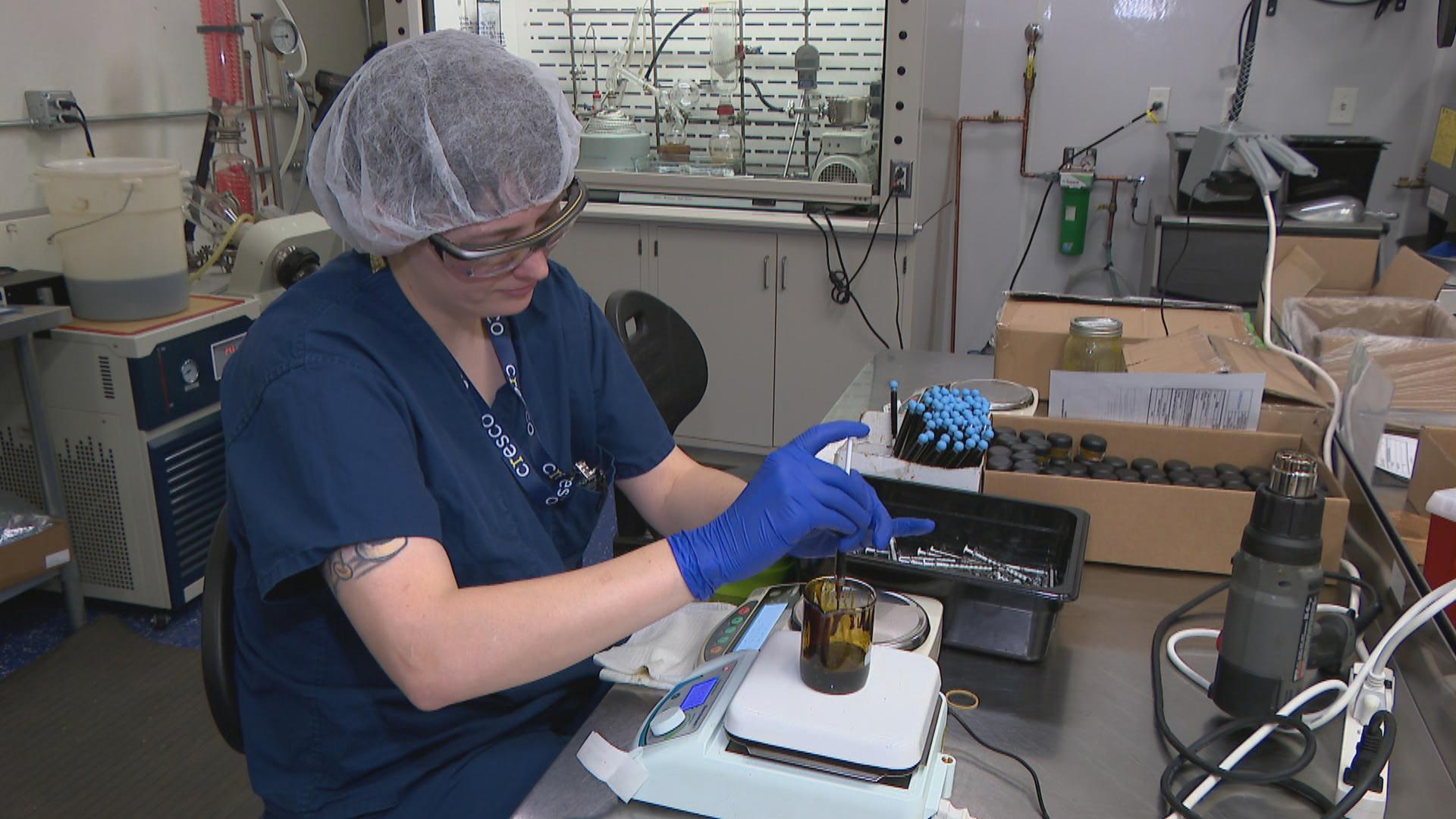 Chicago-based Cresco Labs grows some 30 strains of marijuana at its main cultivation center, in a manufacturing area in suburban Joliet.

While the marijuana leaf may be the unofficial, international symbol for weed – that’s not where the plant’s power resides.

“So if you look closely at this flower part, you can see that it has a dusting or a frosting of trichomes. Those are little oil glands that do contain the cannabinoids,” explains Jason Nelson, Cresco’s vice president for production.

Those cannabinoids contain the power that Creso seeks to harness and sell to patients in Illinois who are looking to marijuana to alleviate their symptoms.

Patients like Adrienne Aaronson, a 78-year-old grandmother and artist from Highland Park who suffers from fibromyalgia.

“Fibromyalgia is constant pain throughout your body. And there’s no way of stopping it, it’s just – it’s there,” she said. “Pain in my joints. Swollen hands. Achiness. Sometimes down in my leg. It just hurts.”

Aaronson had never smoked weed. Until two years ago.

She tried acupuncture but says, “I thought it was silly.”

When those didn’t do the trick, she followed her physician’s advice to visit another doctor – a specialist in integrative medicine who somewhat unwittingly has become an international expert in medical marijuana after Illinois’ law passed in 2013.

“I knew nothing about this as a physician and I read further into it and I saw that the qualifying conditions described my medical practice,” said Dr. Leslie Mendoza Temple. “Fibromyalgia, people with cancer, multiple sclerosis, seizures – and these are the kinds of patients who seek out integrative therapies. And I thought, I better learn a lot about this so that I know more when the patients ask me, ‘cause I knew they would ask me.”

And they did, in increasing numbers. Temple, who went on to become the first chair of Illinois’ Medical Cannabis Advisory Board, says her waiting list has ballooned since she became one of the doctors willing to certify that a patient has a qualifying condition. 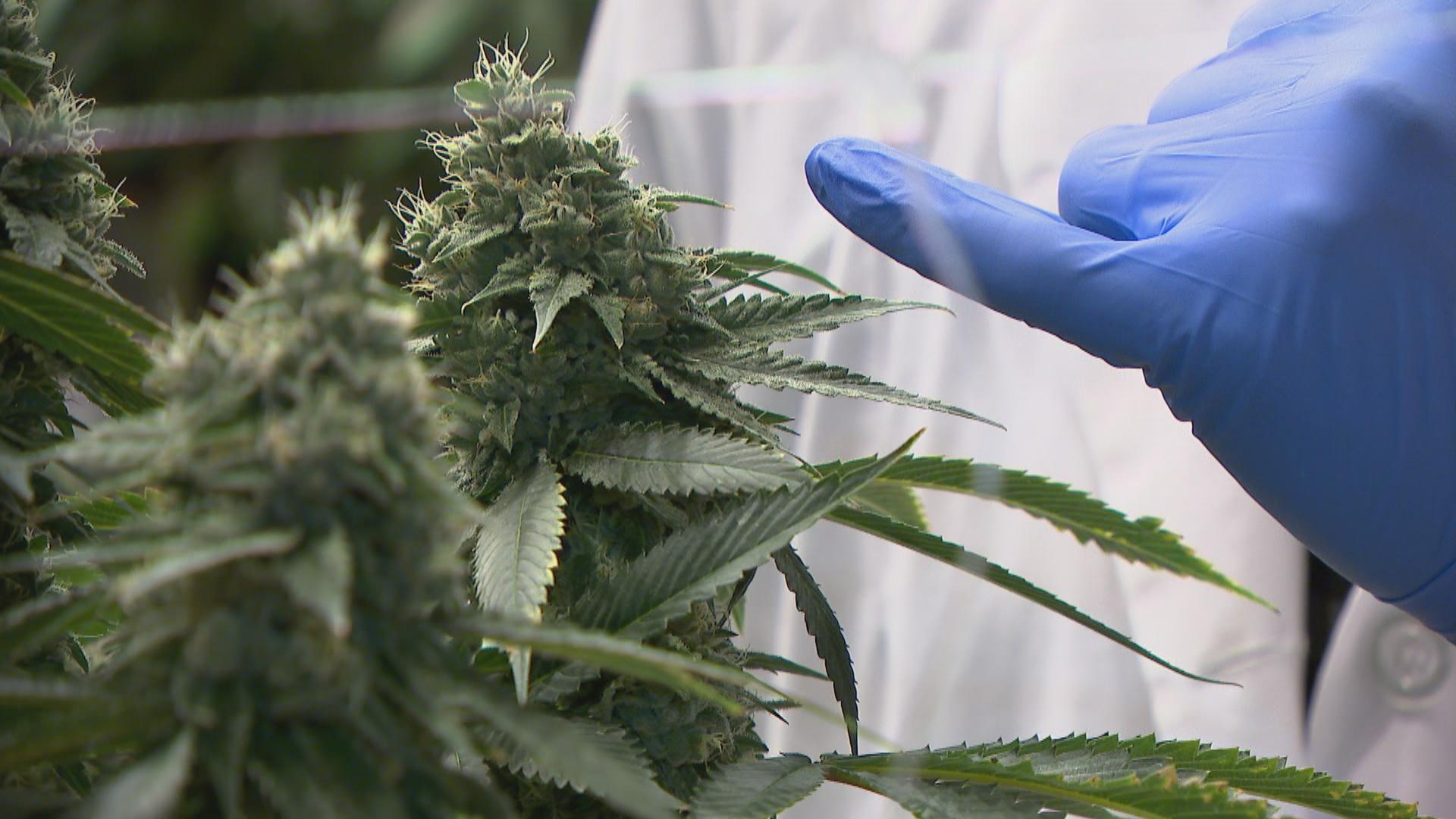 Though hesitant at first, Aaronson says weed is working. She says when she first visited Temple, on a scale of 1-10 her pain used to measure an 8.

She takes her medicine every night, religiously: a chunk of cannabis-laced mango candy she keeps tucked in the fridge.

She says it helps her sleep; and a good night’s sleep helps her with the pain.

“They’re 25 milligrams of THC. Whatever that is. And I probably … will bite off about so much,” she said, pointing to a chunk about the size of a fingernail. “And I’m not going to do that now, because I’m not ready for bed.”

It may taste and look like candy, but Cresco’s Nelson believes in the healing power of these pot gummies, and the other products his company makes – the cannabis gel tablets, oils and tinctures.

“I used to think of myself as something like a tobacco grower or distiller, in that I’m essentially making a vice – at worst – or a lifestyle choice for someone who is of age and can make that choice,” Nelson said. “But what we’ve been really pleasantly surprised with is that now that more research has been enacted from a medical perspective, that there really are true medical benefits from either the whole plant itself or the individual compounds within the plant.”

But how does it work? What magic might these pungent, leafy green plants hold in helping to stem nausea and seizures?

“Our body actually has an endogenous, our own homemade system that creates cannabis-like looking substances. And they help us do five things: they help us eat, sleep, protect ourselves from harm, forget pain when we need to and relax. So you can imagine from moment to moment, when it’s time to eat you get a burst of cannabinoids that, say, drive the appetite and then you eat. When it’s time to sleep you get a little burst there – and this is happening in every cell,” Temple said. “We have this plant from the outside world which we can ingest or smoke that influences this system … The way that cannabis works is that it influences those systems in a way to either enhance one of those functions – to help us forget pain, to get us to eat, to relax, to sleep.”

Still, details on how and whether marijuana does this are elusive, even in the medical community.

Because the federal government classifies cannabis as an illegal drug, researching it has been difficult.

Dr. Stephen Hanauer, the medical director of Northwestern Medicine’s digestive health center, is going about it in a roundabout way.

“Crohn’s disease, which is what I deal with, is one of the autoimmune diseases (of which) we do not yet know the cause or have a medical cure,” Hanauer said. “As soon as you tell a patient that you’ve got a condition that we don’t know what causes it and we don’t have a cure, they’re looking elsewhere. They’re looking for other approaches and that’s obviously nowadays using social media and going online, and there’s a great deal of usage of alternative therapies – not just cannabis.”

He’s about a year into a study, funded by the Digestive Health Foundation, that’s comparing Crohn’s disease patients’ personal evaluations of how they’re feeling with blood and stool samples that can detect intestinal inflammation.

The study won’t be compete for another six months, but Hanauer has a hypothesis.

“My suspicion, is that it makes the patient feel better, but it doesn’t really change the disease activity,” Hanauer said.

Making pain subside sounds great, but that isn’t the same thing as a cure. Hanauer said marijuana could actually pose a problem for people with chronic diseases like Crohn’s if it merely masks the symptoms.

“They go on for essentially a lifetime. They can progress into complications such as narrowing within the bowel that can lead to bowel obstruction and even cancers develop in the presence of ongoing inflammation,” he said. “So we don’t want the patient to be fooled and think that because their symptoms are controlled they’re out of the woods as far as inflammation and the prognosis for the disease is concerned.”

Hanauer warns his Crohn’s patients who choose to go the cannabis route to steer clear of smoking pot, as that can aggravate the disease.

And while pot is often regarded as an anti-nausea remedy, people who rely on it too much may experience Cannabinoid Hyperemesis Syndrome, in which they’re unable to stop vomiting.

Temple said she tells patients to follow a motto: Go low and go slow in their cannabis doses.

“What matters to me most is it has helped my patients,” she said. “Most of them, not all. And that it is a good medicine, definitely not a perfect one, and that we have to have a very balanced viewpoint of what medical cannabis can do. It’s not the miracle that many people will tout that it’s a cure-all, and it’s also not this evil vice that everyone should avoid. The truth is somewhere in the middle, and the truth is going to be different from person to person.”

Temple says it isn’t as simple as writing a prescription for a pharmaceutical drug that’s gone through the rigors of FDA testing. It’s trial and error.

“CBD, THC, CBG, CBN – so there’s an alphabet soup of these different chemicals that have activities on your brain and on your body that can be given in so many different routes,” Temple said. “It can be smoked, vaped, ingested, the oil can be rubbed on the gum, there’s creams, patches and suppositories … You add that times the infinite combinations of cannabinoids and terpenoids and other chemicals that occur naturally in this plant – there’s really no way to determine how I should be dosing every patient.”

That’s precisely why Hanauer says marijuana is not a “medicine.”

After all, it isn’t approved by the FDA (and so insurance won’t pay for it) and it hasn’t been through rigorous studies.

Illinois’ medical marijuana program is still technically in the pilot stages, and it’s tightly regulated – so much so that our cameras aren’t allowed into any of the dispensaries where products are sold.

Temple says anyone using marijuana – for medical reasons or otherwise – needs to be careful.

“We have to be really cognizant of that dark side of cannabis, because I’m concerned that the legitimizing of this as a medicine sends a message to the community that it’s a free-for-all and let’s just use it willy-nilly without any restraint. And that is a big concern of mine.”

She’s thankful she’s virtually free from fibromyalgia pain, and she’ll tell friends who ask, “’Yeah, I’m taking pot.’ I just love to be able to say that!” she said.

She also appreciates that Illinois could use every penny if weed brings about a windfall of revenue.

Even so, she doesn’t think people should be free to smoke a joint, or pop a cannabis candy, just because they feel like it.

She said she wouldn’t take it, if she didn’t have to.

“I’m not in favor of that. Isn’t that terrible? Here I am using it, and I feel that it can be abused,” she said.

Should Illinois legalize marijuana for recreational use, Aaronson’s friends – and anyone else 21 years or older – could take pot too.

In anticipation, Illinois-based marijuana companies have been growing like weeds.