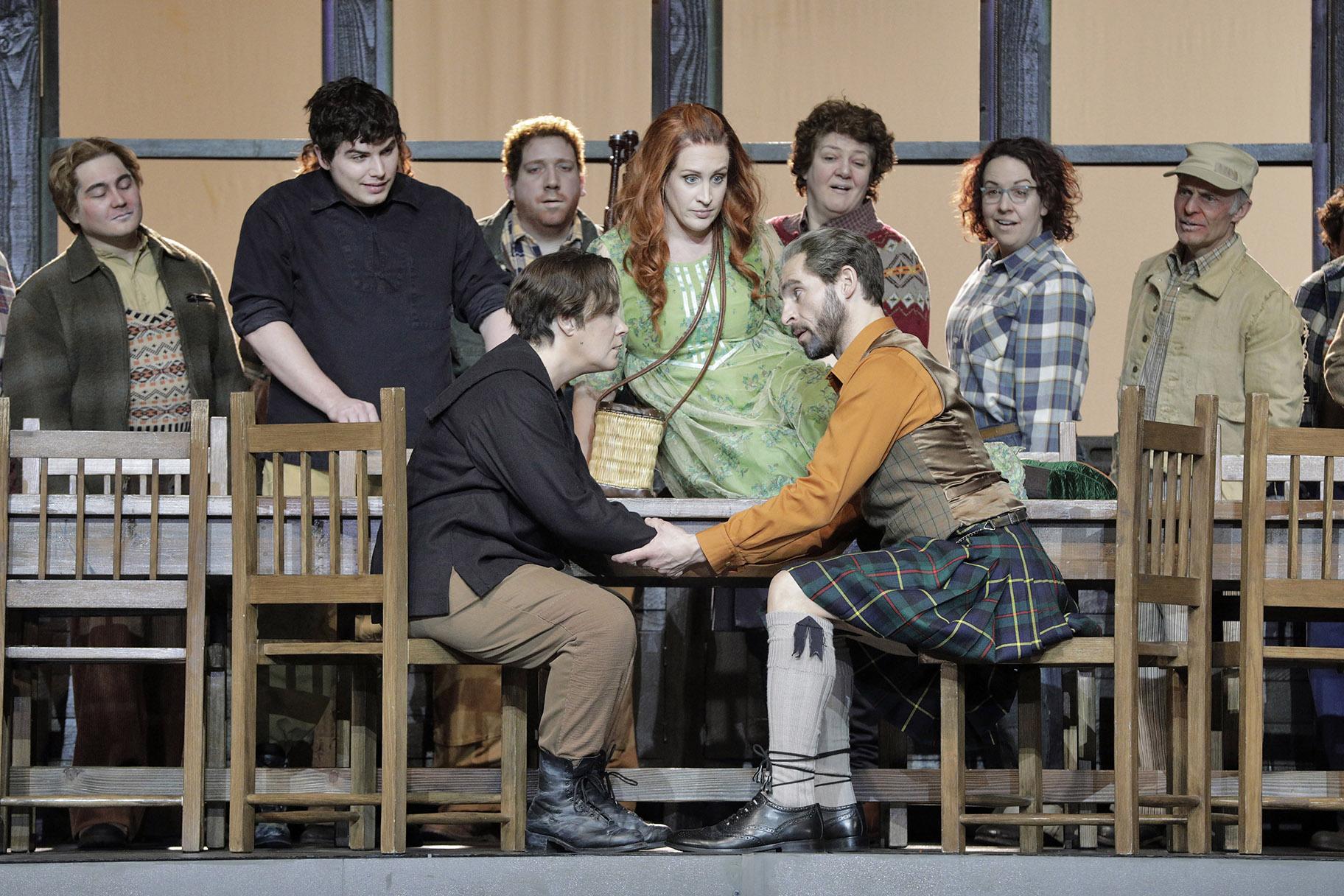 On the very same weekend that British choreographer-director Akram Khan demonstrated how “Giselle,” a mid-19th century ballet classic, could be given an extraordinary new life – remaining faithful to its source yet taking on a fiercely contemporary, yet timeless quality – Lyric Opera showcased the work of Richard Jones, another British director. But Jones (whose uneven “La Boheme” was seen at Lyric earlier this season) has attempted to yank “Ariodante,” Handel’s rarely mounted Baroque opera from 1735, into a more modern era by devising a wholly gratuitous, meaningless and needlessly coarse vision of the work. Fiercely misogynistic on the one hand, it tries to redeem itself with an Ibsen-like, door-slamming final flourish straight out of “A Doll’s House,” replacing a wedding of reconciliation with a feminist rebellion. I just didn’t buy it.

Already seen in Europe and Canada, and now in its Lyric premiere, Jones’ “Ariodante” update not only distracts attention from the beauty of the work’s fiendishly difficult, highly stylized music. But in the process, it suggests he didn’t really trust the original and proceeded to savage it for the simple goal of adding some clichéd shock value that leaves the whole thing feeling clunky rather than contemporary. 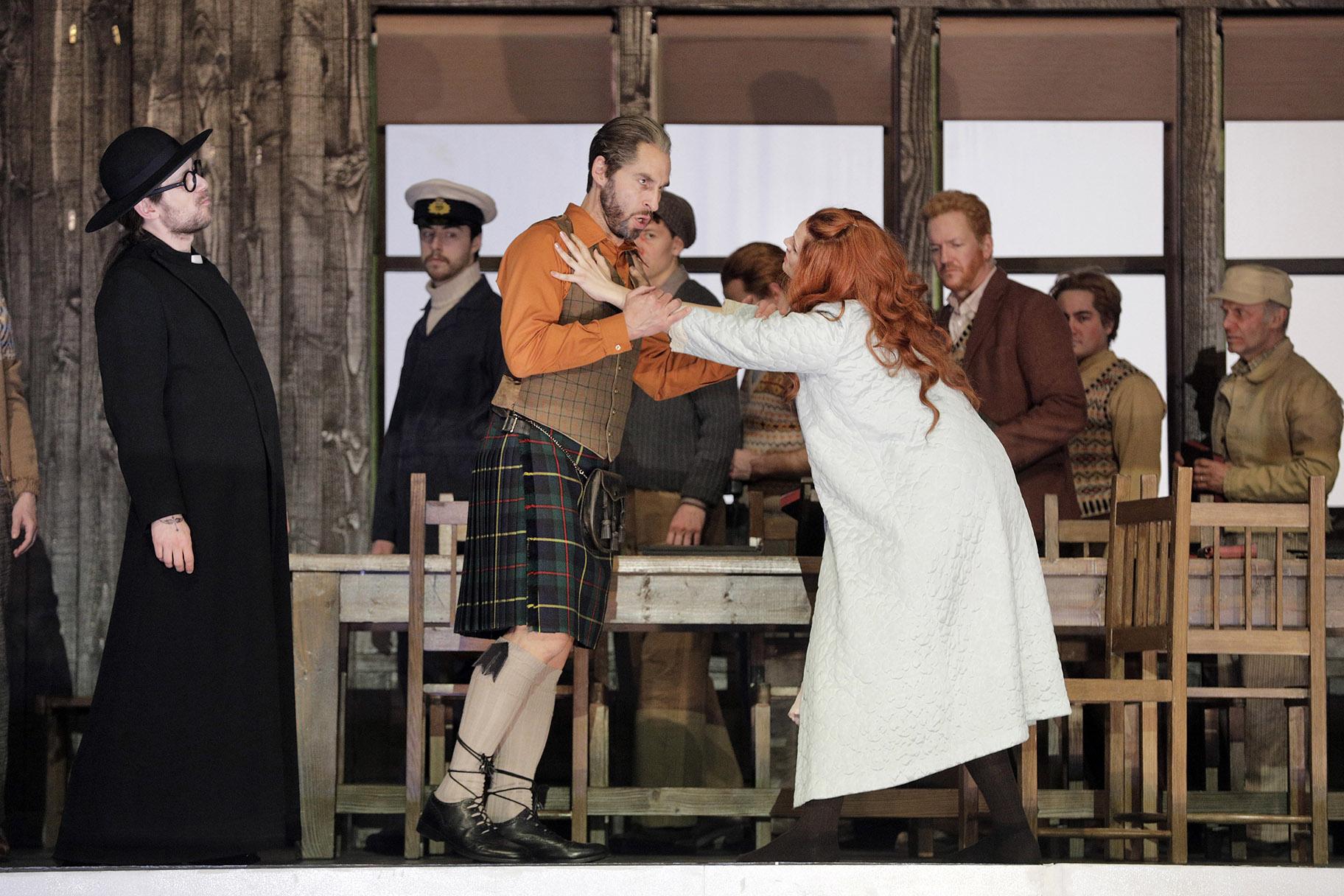 This is not to fault the cast in any way. The singers (including Julie Miller who, at Saturday’s opening night performance assumed the mezzo-soprano “pants role” of the title on short notice after the originally scheduled Alice Coote fell ill with the flu) negotiate Handel’s ferociously difficult, lushly embellished score expertly. But the story – a tale of lovers torn apart by the perniciously evil scheme of a rival, and the willingness of both a groom-to-be and the father-of-the-bride to believe the worst of the person they claim to love, is stretched to needlessly grotesque proportions. A subsidiary relationship stretches all believability. And too often, both the staging and elements of the set are more annoying than engaging.

The opera, originally set in a medieval Scottish kingdom, now unfolds in what appears to be a rural backwater of Scotland in the mid-20th century, with the kingdom resembling nothing more than a modest gathering of blue-collar laborers who might be members of a fraternal organization led by a so-called King (bass-baritone Kyle Ketelsen).

The King’s daughter, the happily romantic Ginevra (soprano Brenda Rae), is madly in love with “Prince” Ariodante (Miller), and their planned marriage has the blessing of her father. But another would-be suitor, Polinesso (counter-tenor Iestyn Davies), is hell-bent on having her for himself. And this “Duke,” the creepiest of sexual predators – a pervert alternately dressed as a Bible-thumping Calvinist minister and a sadistic biker – will use Ginevra’s maid, Dalinda (vivid singing by soprano Heidi Stober), who, beyond all belief, wants him as her own suitor, to help carry out his nefarious plan. 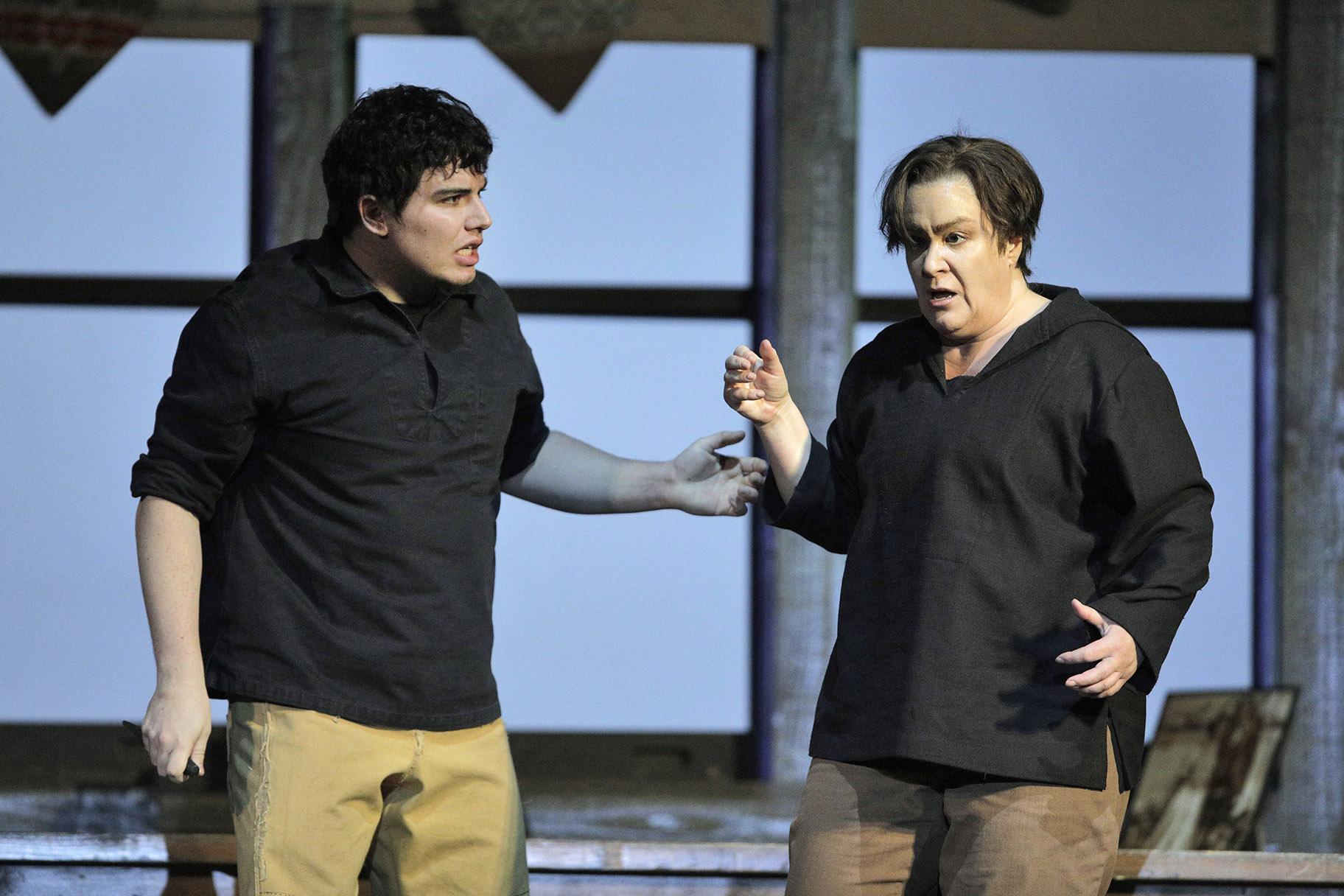 Dalinda, who turns out to be quite the masochist-in-the-name-of-love, will not only betray Ginevra, but will debase herself in the most appalling ways. And then there is Ariodante’s handsome, good-hearted brother, Lurcanio (Eric Ferring, a rich-voiced tenor and honest actor who easily captures the forthrightness of his character), whose romantic overtures are unaccountably rejected by Dalinda in favor of the sickeningly creepy Polinesso.

Lies, deceptions, betrayals, physical and emotional abuse, thoughts of suicide and more are all part of the mix, even as the vocal lines of the characters could not be more beautiful (or treacherously difficult). But along the way much of Jones’ twisted overlay distorts the emotional drive of the work. The stories and music of some operas have their time and place so tightly woven into the very fabric of their being that meddling only undercuts them. “Ariodante” is one of those works, and Jones has robbed it of much of its emotional power in favor of attention-getting gimmicks.

The opera’s set, by ULTZ, features three rooms in the King’s home – with the main dining hall at the center, Ginevra’s bedroom on one side, and a kitchen on the other. Flimsy little turnstiles that are supposed to suggest peephole-like keyholes in the nonexistent doors separating these rooms are far more distracting than helpful. 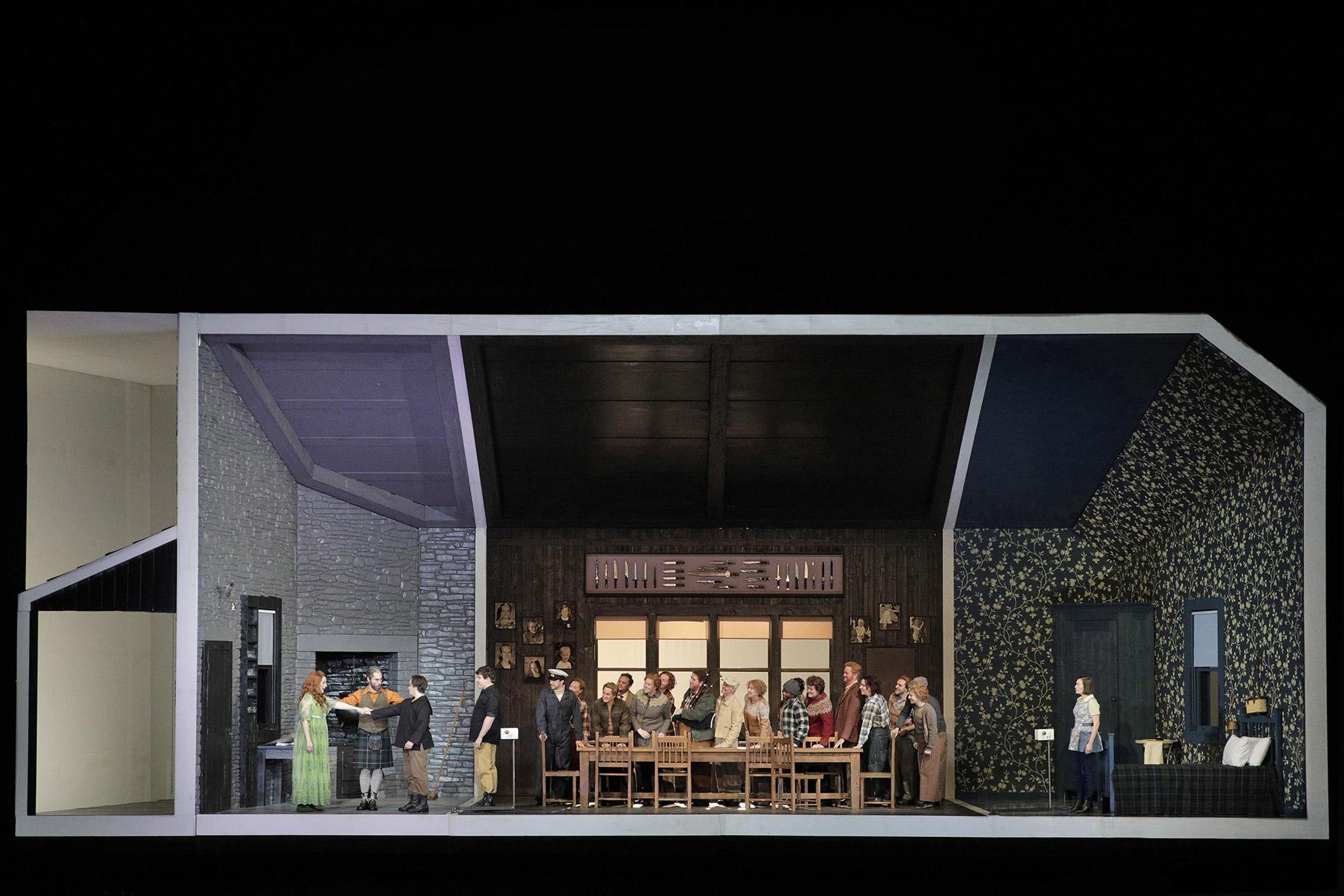 Miller (one of the many stellar alums of Lyric’s Ryan Center, who is best known here for her performances in new works), subtly captured the body language of her male character. And she and Rae, who moves with grace and confidence, and sings with great warmth, beautifully blended voices in the lush first act arias that suggest their love and promise of faithfulness, with Rae also bringing a lovely freshness to the celebration of her impending wedding. 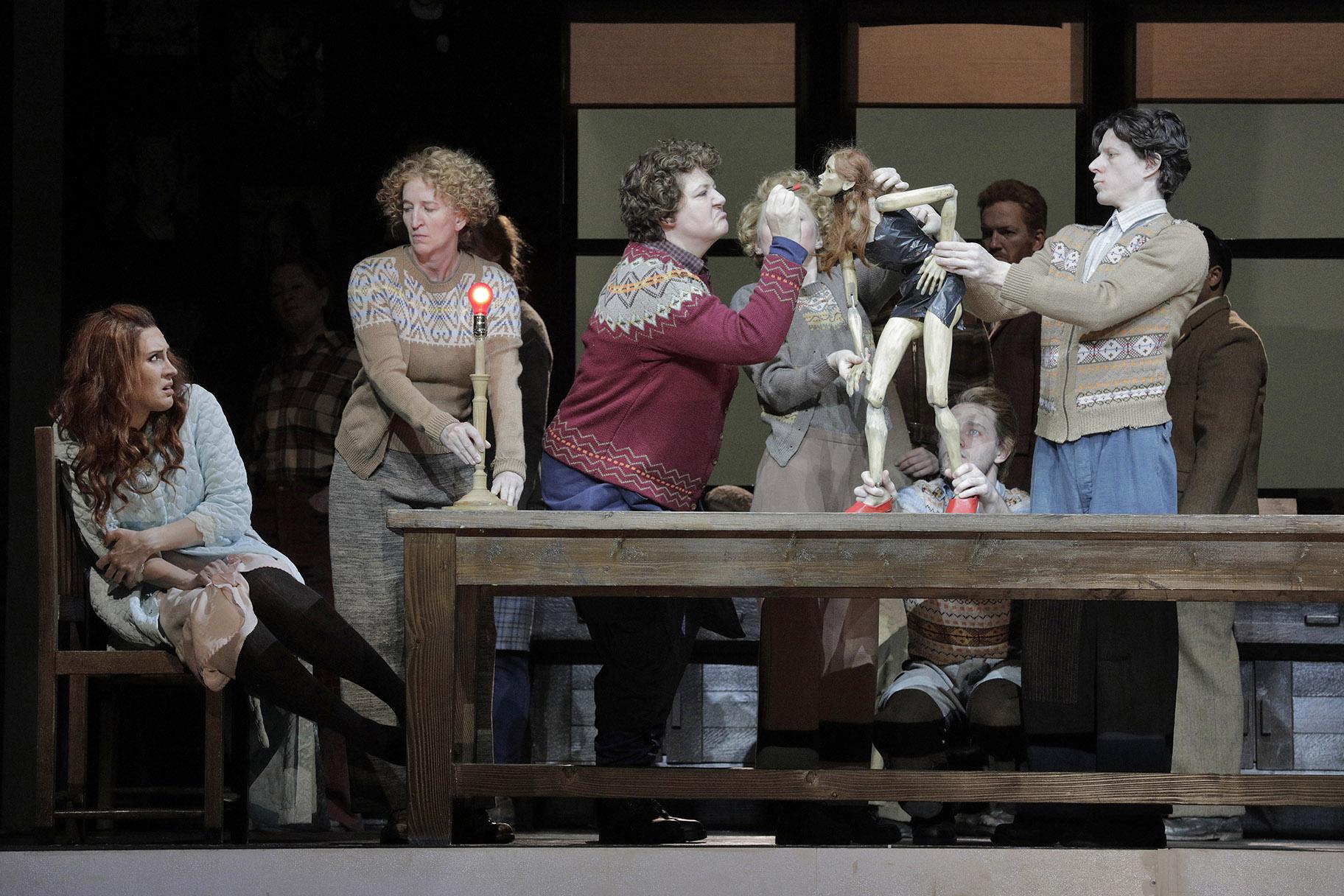 Jones has turned Polinesso into a cartoon version of the repulsive villain – a man of intensely warped sexuality. (Davies even earned hisses at his curtain call.) But why any woman would have even the slightest attraction to him begs all believability – especially a woman as bright as Dalinda, to whom Stober brings her clear, strong voice. At least some element of deceptive charm is needed to make the machinations of the plot work. That said, Davies, who must engage in much loathsome behavior, brings his fine counter-tenor to bear throughout.

For Baroque music lovers, Handel’s rarely heard score – expertly played by the Lyric Opera orchestra under the direction of Harry Bicket – is the primary reason to catch this “Ariodante.” As for the kinky, souped-up undertow of it all, just write it off as a director’s self-indulgence.