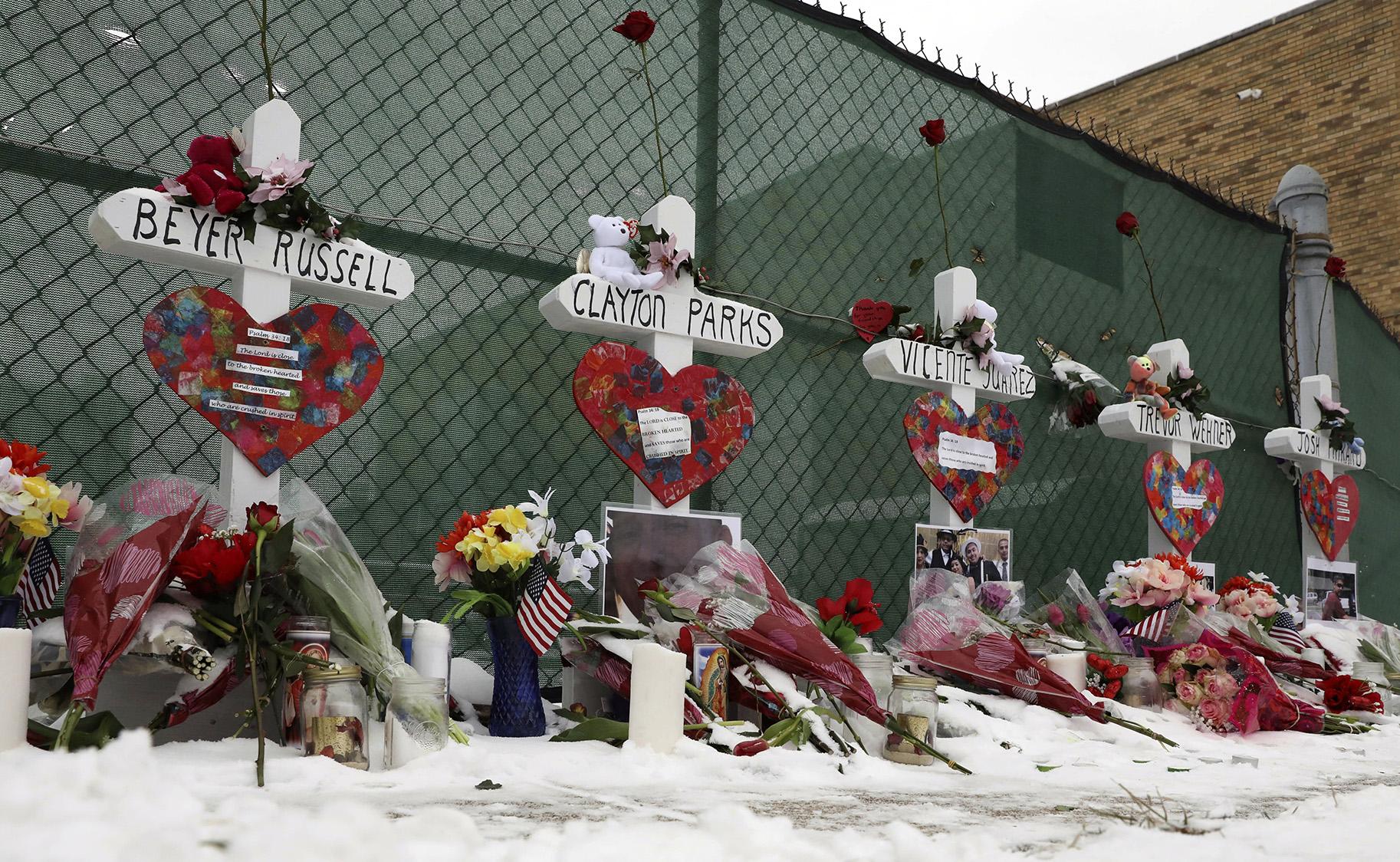 Crosses are placed for the victims of a mass shooting Sunday, Feb. 17, 2019, in Aurora, near Henry Pratt Co. manufacturing company where several were killed on Friday. (AP Photo / Nam Y. Huh)

AURORA, Ill. (AP) — An initial background check failed to detect a felony conviction that should have barred the man who killed five co-workers and wounded six other people at a suburban Chicago manufacturing plant from buying the gun.

Months later, a second background check of Gary Martin found his 1995 aggravated assault conviction in Mississippi involving the stabbing of an ex-girlfriend. But it prompted only a letter stating his gun permit had been revoked and ordering him to turn over his firearm to police — raising questions about the state’s enforcement to ensure those who lose their permits also turn over their weapons.

A vigil for the victims, including a university student on his first day as an intern and a longtime plant manager, was held Sunday outside Henry Pratt Co. in Aurora, about 40 miles west of Chicago. More than 1,500 people braved snow and freezing drizzle to attend.

Martin, 45, was killed in a shootout with officers Friday, ending his deadly rampage at the plant. His state gun license permit was revoked in 2014, Aurora Police Chief Kristen Ziman said.

But he never gave up the .40-caliber Smith & Wesson handgun he used in the attack. Investigators are still trying to determine what exactly law enforcement agencies did after that letter was sent, Ziman said.

Illinois lawmakers who support more gun control measures said Martin was able to keep the gun because of a flaw in the 1968 law that requires residents to get a Firearm Owner’s Identification card, or FOID card, to purchase firearms or ammunition. They must pass a background check, but the law does not mandate that police ensure weapons have been removed if a red flag is raised later.

Legislation was introduced in 2016 to require police go to the homes of gun owners who have their FOID cards revoked and search for the weapons, but it failed over concerns it would overtax police departments, said Democratic Rep. Kathleen Willis.

She wants to see a similar measure introduced again.

“Let’s use some common sense. If you have someone with a felony, obviously they are not the best law-abiding citizens who are going to follow through when they get the letter and go, ‘oh yeah, here’s my gun, no problem,’” Willis said. “We have to have oversight. That’s the biggest flaw in the whole system. We’re asking people who already have done something wrong, to do something right.”

Last year, Illinois joined other states like California in passing a law that allows family members to petition to have a gun removed from a home and a person’s permit revoked if they believe they might use it to harm themselves or others.

Lawmakers are also working to add teeth to restrictions on the transfers of gun ownership from a person whose permit has been revoked, Willis said. The change follows a 2018 shooting at a Tennessee Waffle House involving a man who had to give his guns to his father after his Illinois FOID card was revoked, but his father later gave them back to him.

Legislators want people who obtain such weapons to sign an affidavit vowing to not return the weapons to the original owner.

Martin was no stranger to police in Aurora, where he had been arrested six times over the years for what Ziman described as “traffic and domestic battery-related issues” and for violating an order of protection.

After an initial background check failed to detect his felony conviction, Martin was issued his FOID card and bought the Smith & Wesson handgun on March 11, 2014. Five days after that, he applied for a concealed carry permit. That background check, which used digital fingerprinting, did flag his Mississippi felony conviction and led the Illinois State Police to revoke his permit.

Records stemming from his 1995 conviction in Mississippi described an extremely violent man who abused a former girlfriend, at one point hitting her with a baseball bat and stabbing her with a knife, The Washington Post reported Saturday.

After serving less than three years, he moved to Illinois and landed a job at Henry Pratt. The conviction was not detected in a company background check.

Authorities said Saturday that Martin pulled out the gun and began shooting right after hearing he was being fired from his job of 15 years at the industrial valve manufacturer for various workplace violations. The company has not given further details on what they were.

Martin killed three people in the room with him and two others just outside, Ziman said. Among the dead was a college student starting a human resources internship at the plant that day. Martin also wounded a sixth worker, who is expected to survive.

After wounding five officers, Martin hid in the back of the building, where officers found him about an hour later and killed him during an exchange of gunfire, police said. All of the wounded officers are expected to live.

Wehner, 21, was on the dean’s list at NIU’s business college and was on track to graduate in May with a degree in human resource management.

The Rev. Dan Haas told those who gathered outside Henry Pratt for Sunday’s vigil that the killings left the victims’ families brokenhearted and in mourning.

“All of these were relatively young people — many of them were very young people. We will never know their gifts and talents. Their lives were snuffed out way too short,” he said.