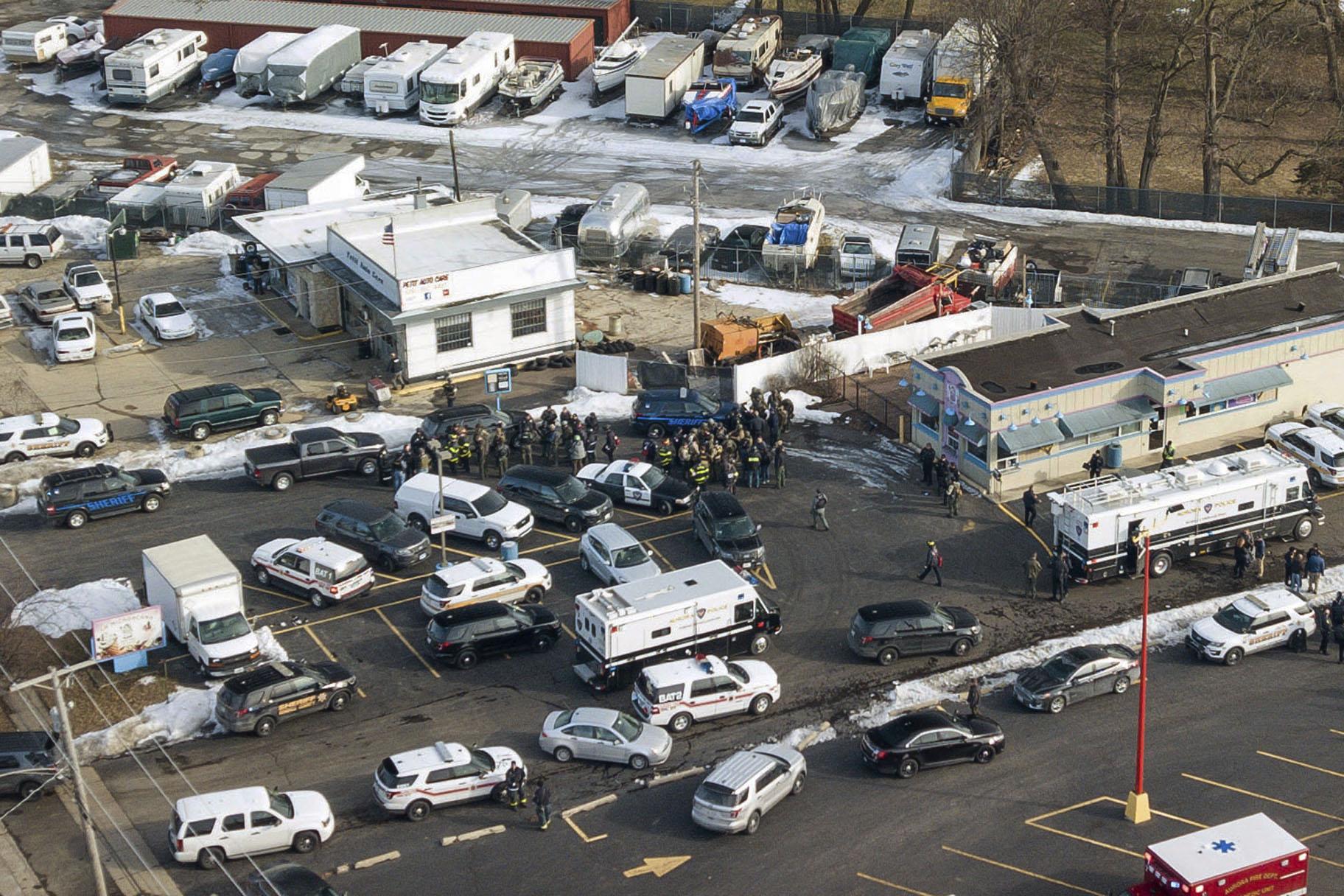 Law enforcement personnel gather near the scene of a shooting at an industrial park in Aurora, Illinois, on Friday, Feb. 15, 2019. (Bev Horne / Daily Herald via AP)

Aurora, Illinois, Police Chief Kristen Ziman said 45-year-old Gary Martin “was being terminated” before he started shooting at the Henry Pratt Co. — which makes valves for industrial purposes — in the city about 40 miles west of Chicago.

She told a news conference that in addition to the five employees killed, a sixth worker was taken to a hospital with injuries that were not life threatening. A sixth police officer suffered a knee injury while officers were searching the building.

Ziman said officers arrived within four minutes of receiving reports of the shooting and were fired upon as soon as they entered the 29,000-square-foot manufacturing warehouse.

Police said they did not know the gunman’s motive. 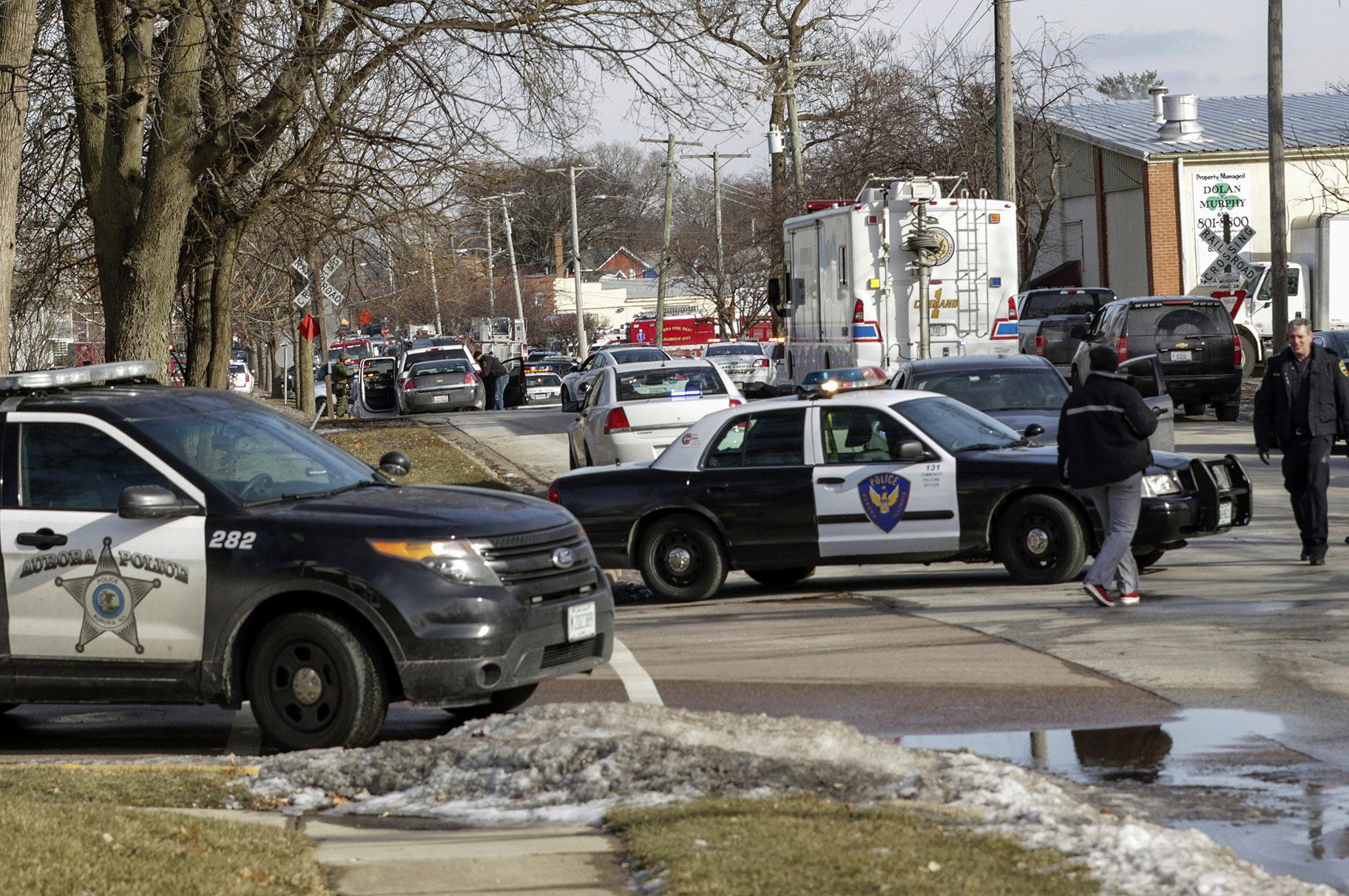 Law enforcement personnel gather near the scene of a shooting at an industrial park in Aurora, Illinois, on Friday, Feb. 15, 2019. (Bev Horne / Daily Herald via AP)

“May God bless the brave law enforcement officers who continue to run toward danger,” Illinois Gov. J.B. Pritzker said at the news conference.

John Probst, an employee at the Henry Pratt Co. in Aurora, told ABC7 that he ran out of the back door as the shooting unfolded Friday afternoon. Probst says he recognized the gunman and that he works for the company.

“What I saw was the guy running down the aisle with a pistol with a laser on it,” Probst said.

Probst said he wasn’t hurt but that another colleague was “bleeding pretty bad.”

“It’s a shame that mass shootings such as this have become commonplace in our country. It’s a shame that a cold and heartless offender would be so selfish as to think he has the right to take an innocent life,” Aurora Mayor Richard C. Irvin said. 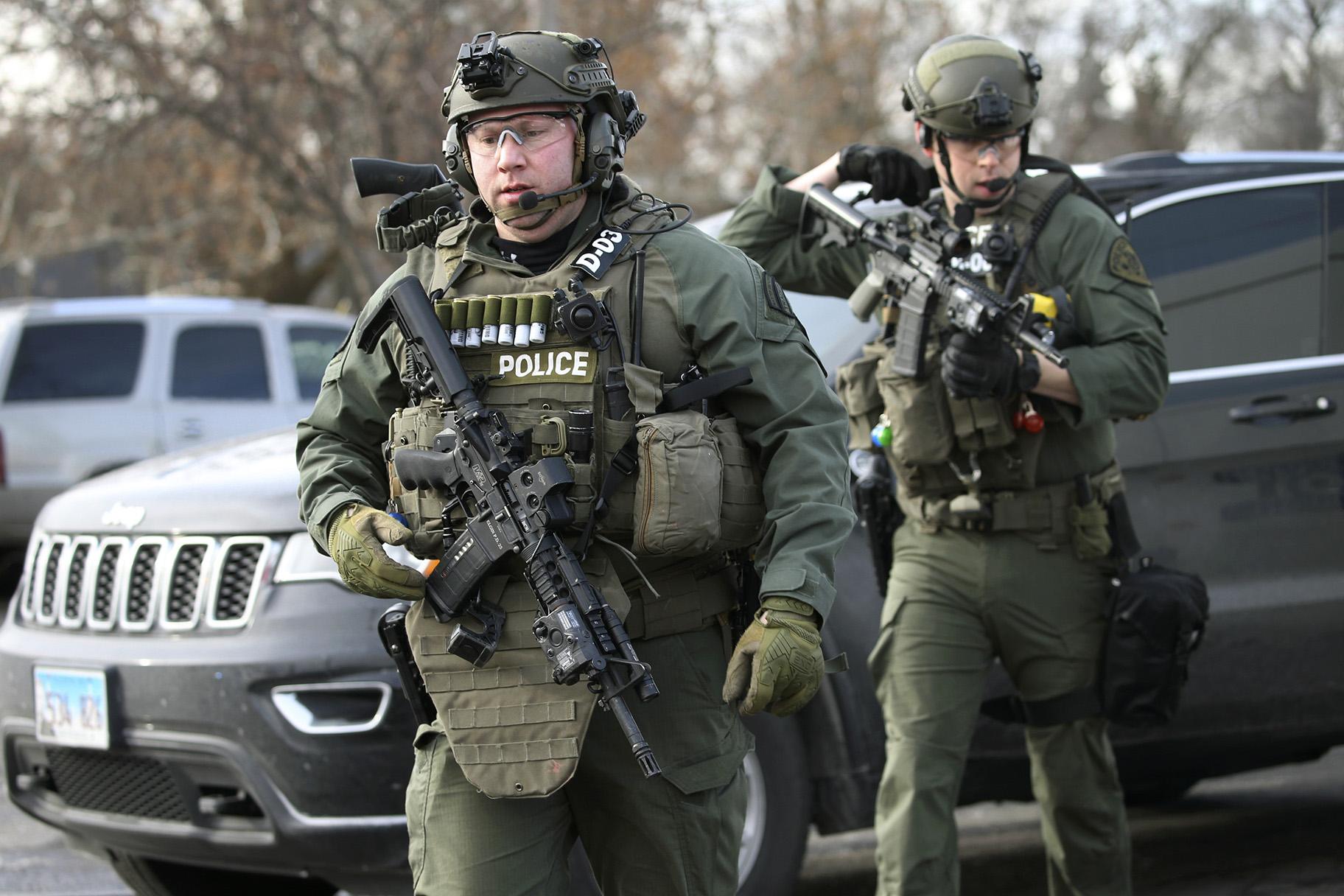 Police officers armed with rifles gather at the scene where an active shooter was reported in Aurora, Illinois, on Friday, Feb. 15, 2019. (Antonio Perez / Chicago Tribune via AP)

At Acorn Woods Condominiums where Martin lived, a mix of brick apartments and condos nestled on a quiet street just a mile and a half from the shooting, neighbors gathered on sidewalks near Martin’s unit talking and wondering among themselves if they knew or had come in contact with him.

Mary McKnight stepped out of her car with a cherry cheesecake purchased for her son’s birthday, to find a flurry of police cars, officers and media trucks.

“This is a strange thing to come home to, right,” she said. She had just learned that the shooter lived close by and his unit in the complex had been taped off by police.

Christy Fonseca often worries about some of the gang-related crimes and shootings around her mother’s Aurora neighborhood. But she never expected the type of phone call she got from her mom on Friday, warning her to be careful with an active shooter loose in the town.

Police cars with screaming sirens revved past her as she drove to her mother’s house, where the Henry Pratt building is visible from the porch stoop. It was only when they flipped on the television news that they realized Martin had killed people just a few hundred feet away.

“In Aurora, period, we’d never thought anything like this would happen,” Fonseca, a lifelong resident of the Chicago suburb, said as she looked out at the factory.

The White House said President Donald Trump was briefed on the shooting and monitoring the situation as he prepared to depart for a weekend trip to his home in Palm Beach, Florida. Trump tweeted his thanks to law enforcement officers in Aurora and offered his condolences to the victims and their families. “America is with you,” he said.

For The Latest on the shooting: https://bit.ly/2EcHSOO