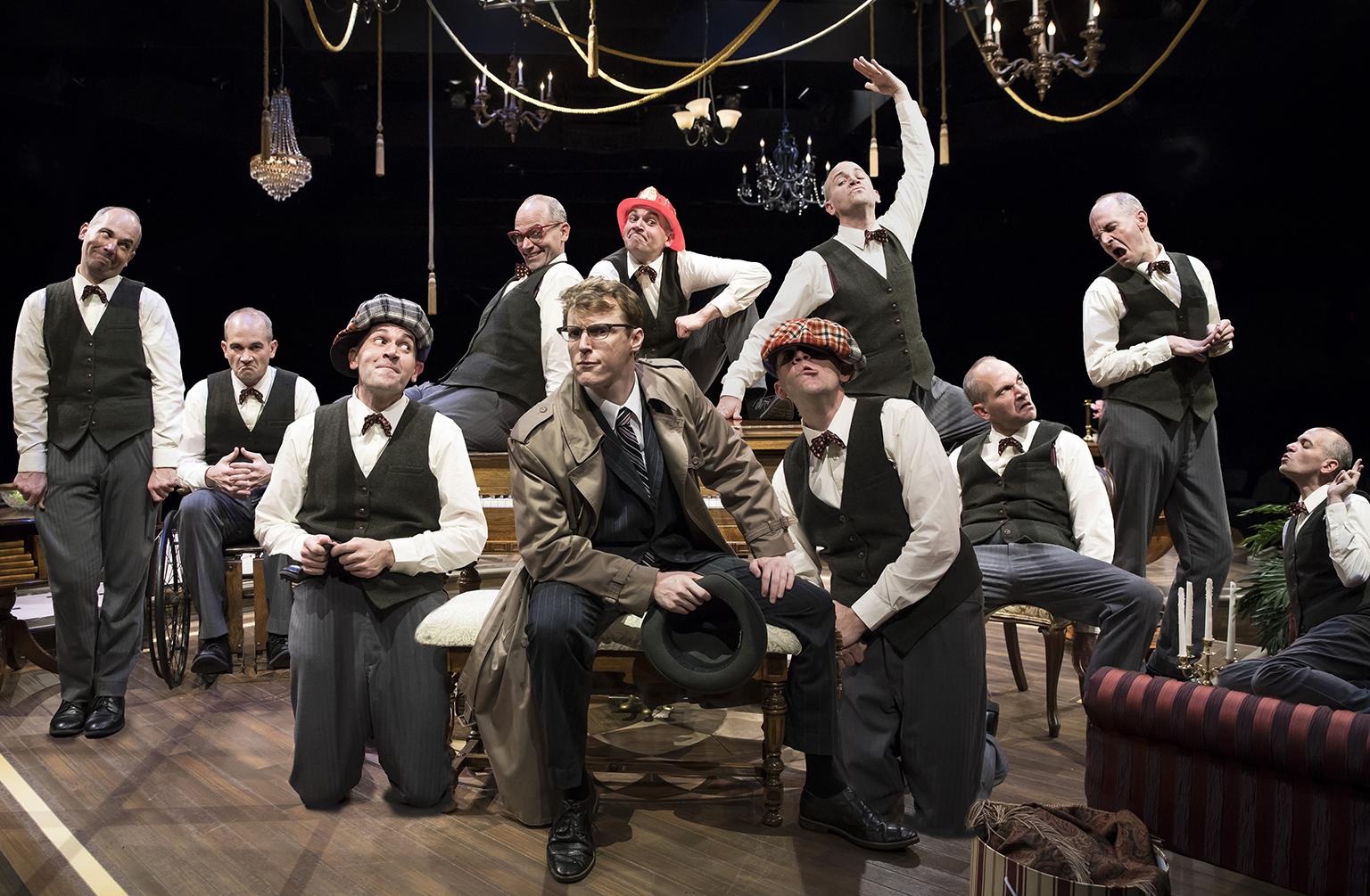 “Murder for Two,” the manic perpetual motion machine of a show now at the Marriott Theatre, plays a farcical twist on the classic Agatha Christie-style whodunit. But in this case, both the corpse, and the identity of his murderer, are almost beside the point.

The real question at the heart of this 95-minute, music-infused marathon of a farce – which features two actors playing 13 characters and frequently sharing time at a piano – is whether the performers themselves will make it out alive. At the very least, you might find yourself hoping that a couple of bottles of Gatorade, two large steaks and an oxygen machine will be waiting for the pair as they stagger into their dressing rooms after each show. And you really have to wonder if they will survive an eight-performances-a-week schedule without losing their minds. 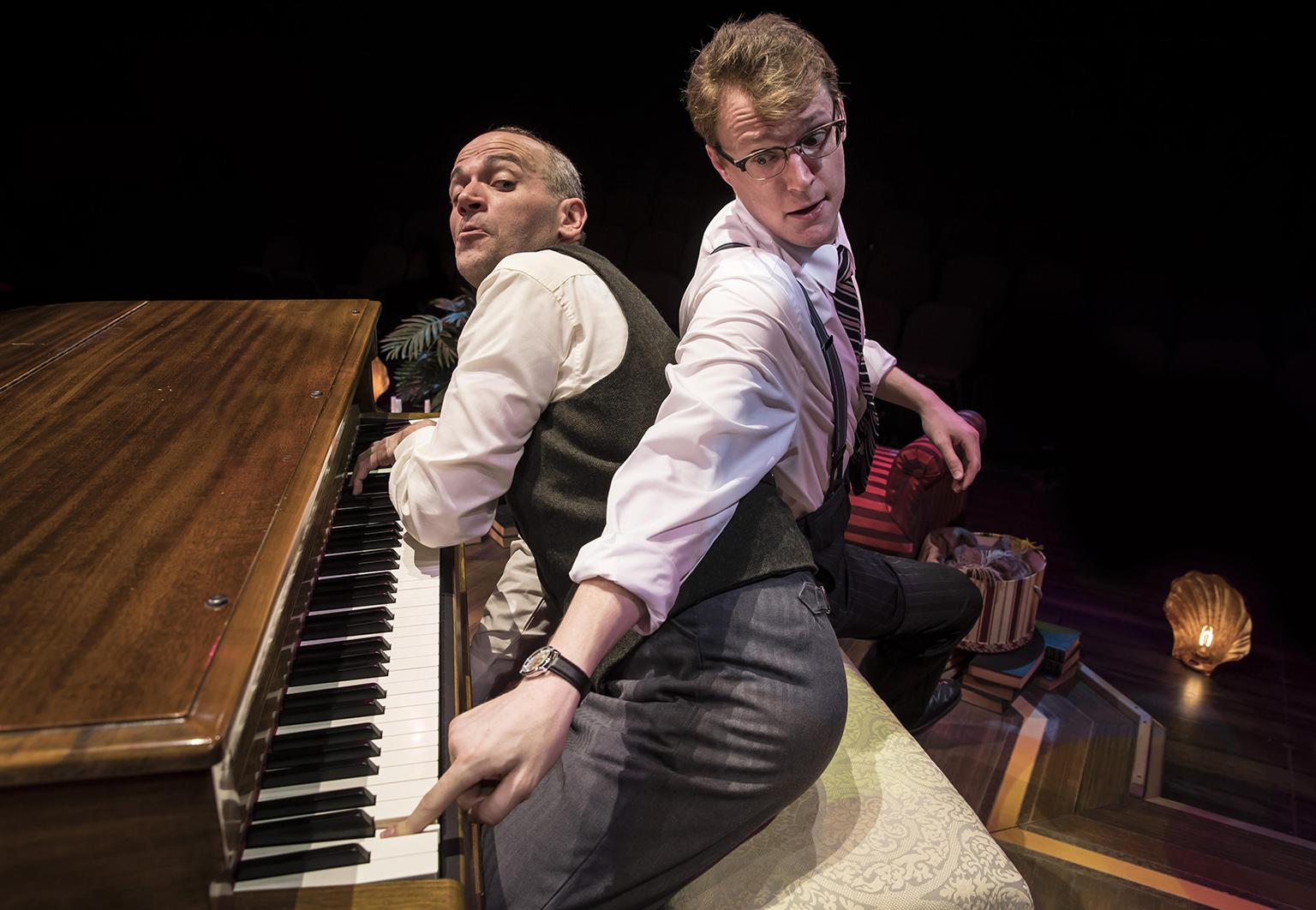 Without doubt, “Murder for Two” – the zany creation of Joe Kinosian (book and music) and Kellen Blair (book and lyrics) – is sheer murder to perform, requiring a killer level of both physical and mental focus and the most precise, tightly coordinated timing. Miss a beat and the whole thing could easily crumble into chaos.

Happily, at Marriott, actor/musicians Noel Carey (as Officer Marcus Moscowicz, the cop hell-bent on earning a promotion to detective), and Jason Grimm (as most of the eccentric suspects in the case), see it through with clock-like precision. And they are aided and abetted by the pratfall-packed direction of Scott Weinstein, the airtight music direction of Matt Deitchman, and the ingenious set design by Scott Davis that makes a prop-packed revolving stage (lit by Jesse Klug) something of a third character as the actors weave their way among antique furniture, suitcases, lamps, plants, books, a globe, a candelabra, a hat tree and the grand piano at the center of it all.

The playfully Freudian-tinged story goes like this: Arthur Whitney, an immensely successful American novelist, who turns the people in his life into the characters in his books, is found dead of a gunshot wound to the head on the night of the surprise birthday party being thrown by Dahlia, his ice cream-loving wife – a woman who has probably had to put up with a certain amount of philandering by her husband. 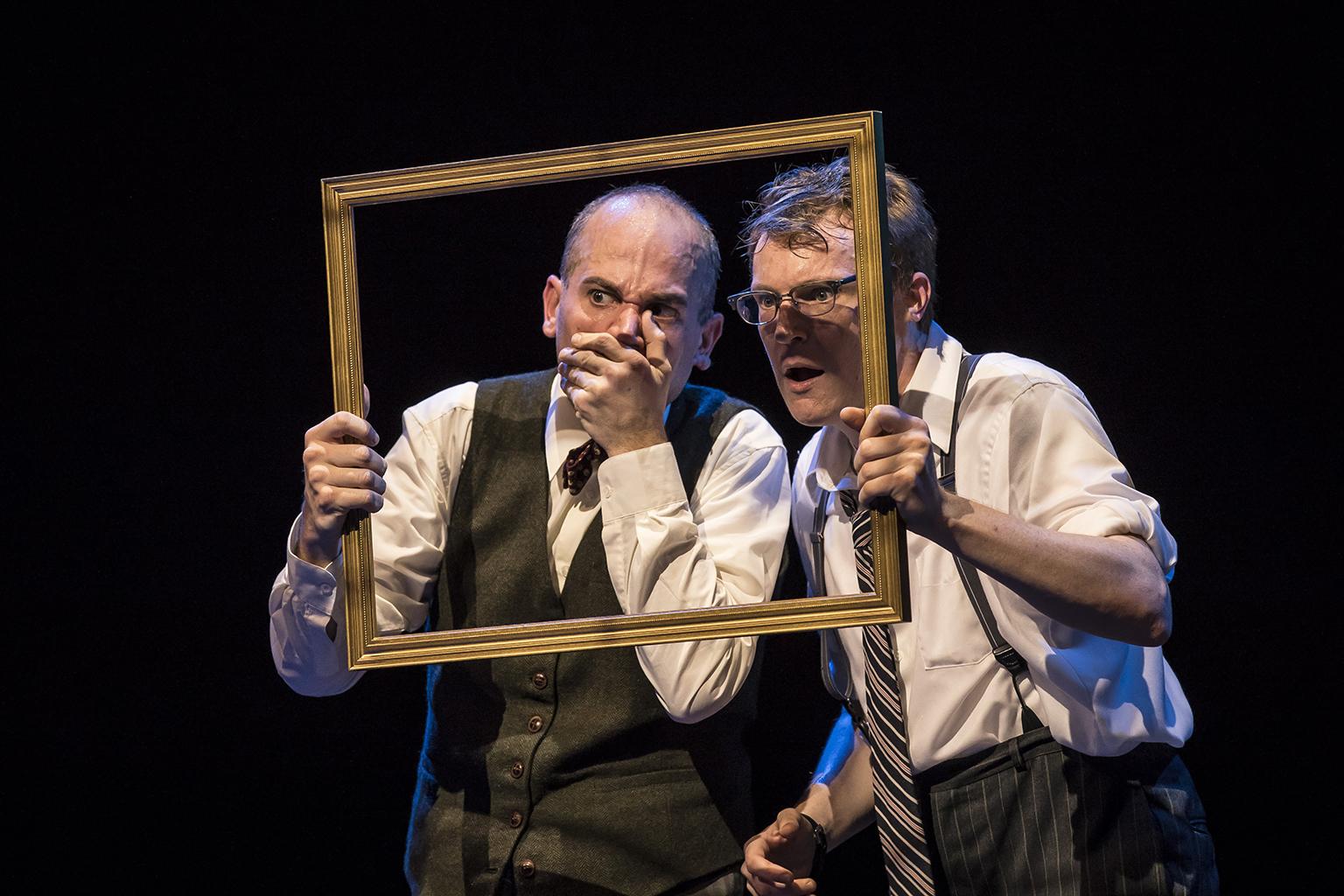 Marcus is on the scene from the start, and he decides that by cracking the case he can realize his dream of becoming a detective. He soon comes to understand that there is no shortage of suspects, and they run the gamut – from a seductive, self-dramatizing ballerina, to a heavily accented psychiatrist confined to a wheelchair, to a bunch of street urchins. And of course there’s the wife.

The show (which received its world premiere by the Chicago Shakespeare Theater in 2011), demands actors adept at rapid-fire physical and vocal comedy who can shift body language and accents on a dime. Grimm must finesse most of the transformations, and he does so with total ease, while Carey takes on most of the piano work. But throughout, the two interact with campy panache as if joined at the hip. 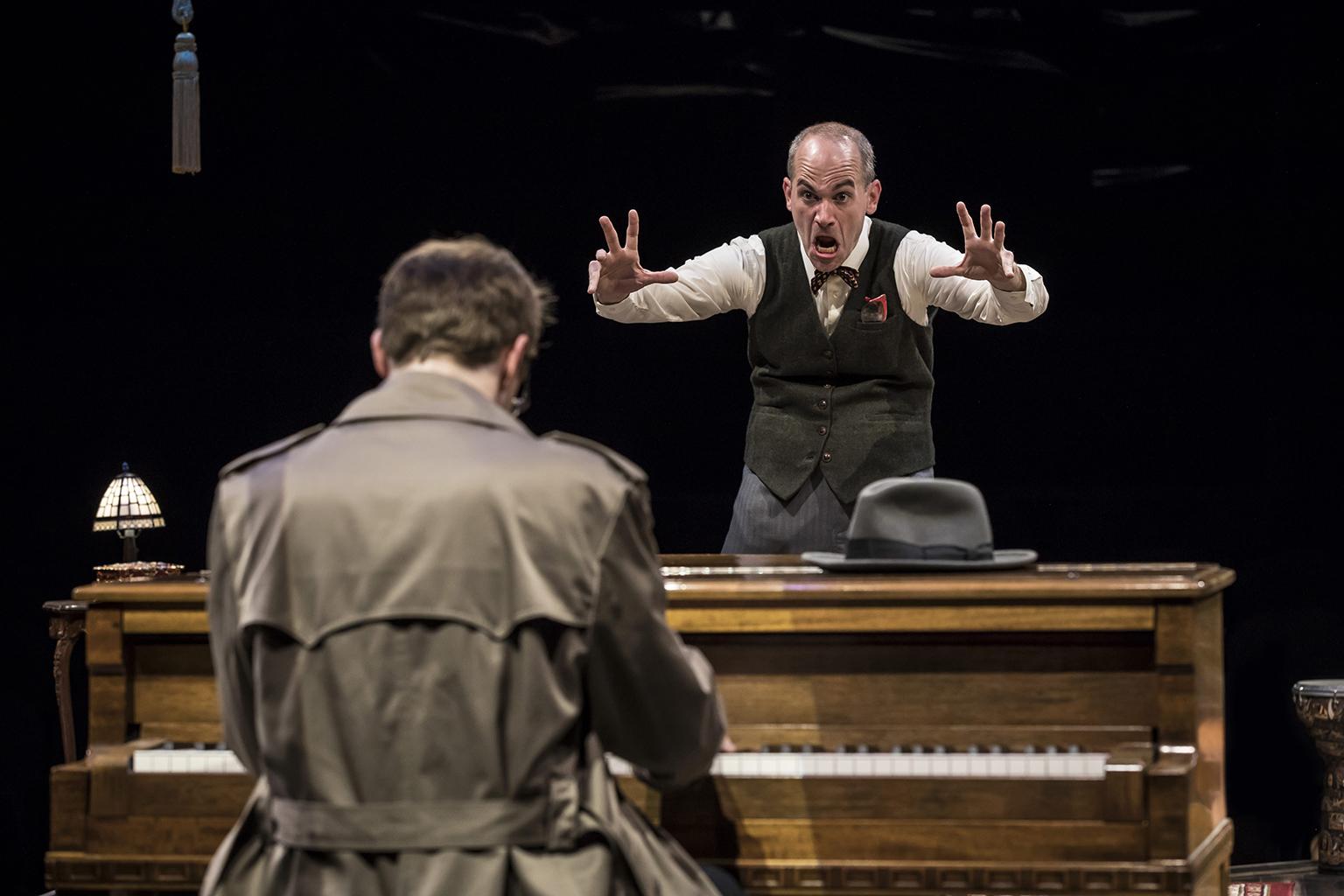 All that said, the show begins to grow tiresome after the first hour or so. And despite the laughter, the sheer awe at the actors’ endurance and facility, and a couple of brief, playful interactions with members of the audience, you might just find yourself thinking: I don’t really care who murdered that novelist. I just wish they’d nail the perpetrator and bury the victim.