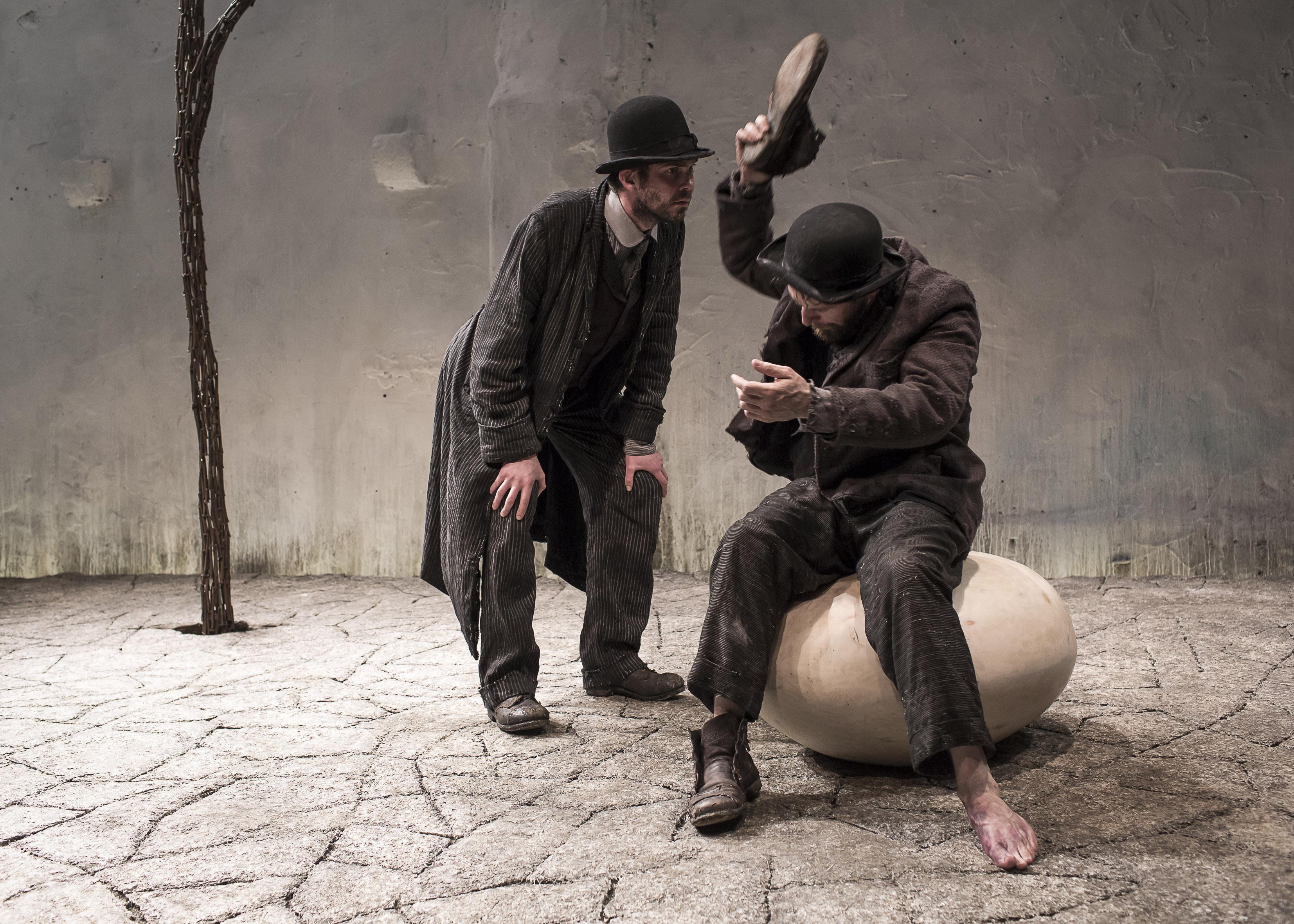 Within the span of a single week I saw productions of two plays – Samuel Beckett’s “Waiting for Godot” and Sam Shepard’s “Buried Child” – that I wouldn’t necessarily have linked together had I not seen them in such quick succession.

Written in the wake of the cataclysmic events of World War II, “Godot” – a mordantly funny meditation on the human condition that debuted in Paris in 1953 (and then in London two years later) – is universally acknowledged as the play that transformed the landscape of 20th century theater.

Shepard, who arrived in New York in the 1960s, and clearly absorbed the influence of Beckett and others at a time when the Off-Off Broadway scene was burgeoning, proceeded to put a distinctive American spin on the state of the human condition. And for all its differences, his “Buried Child,” which arrived on a San Francisco stage in 1978, a full generation after “Godot,” owes much to the blackly comic, grimly absurdist tone of Beckett’s work.

First, “Godot,” now in a production by Ireland’s esteemed Druid theater company as a guest of the Chicago Shakespeare Theatre. 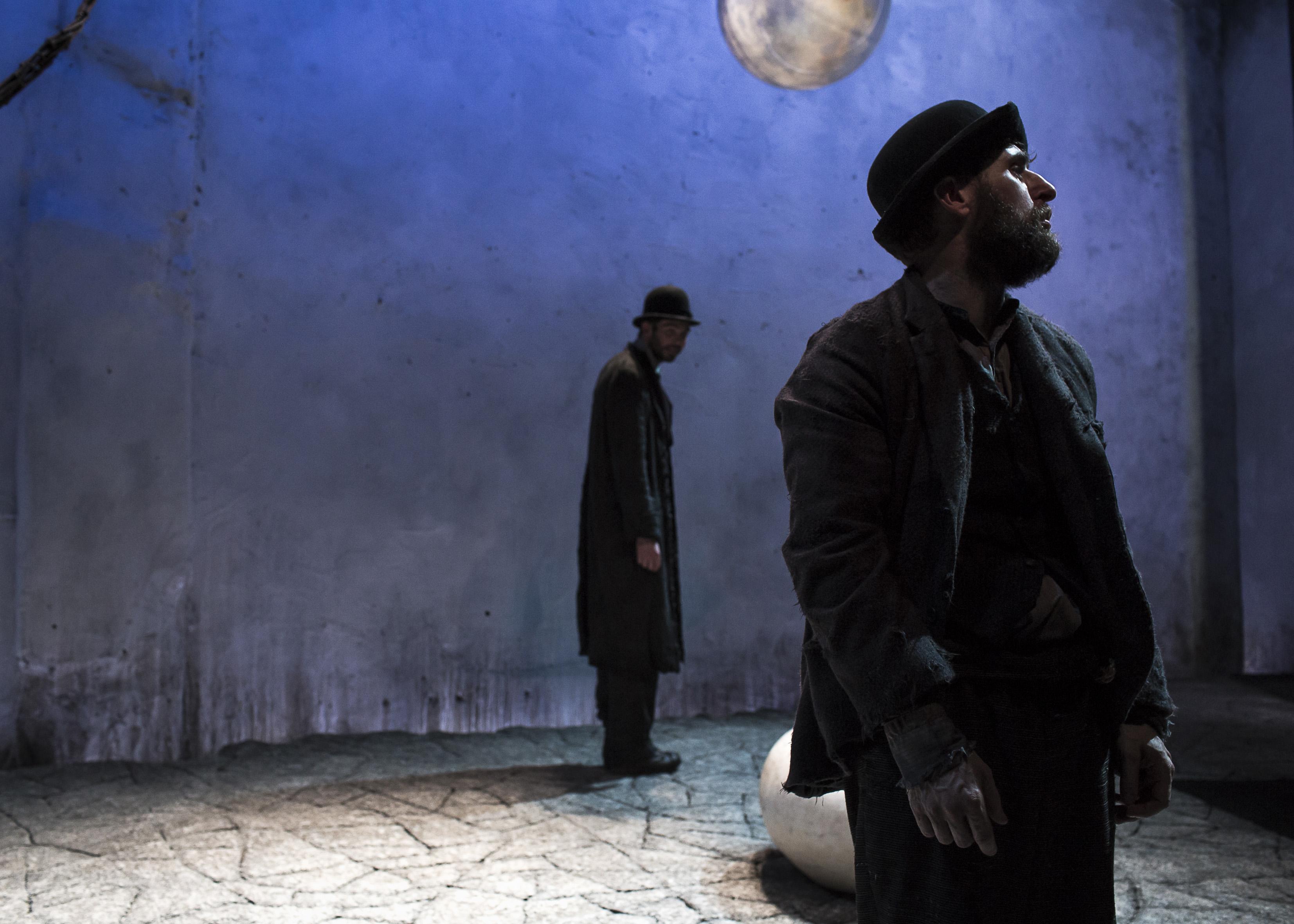 Marty Rea and Aaron Monaghan in “Waiting for Godot.” (Photo by Matthew Thompson)

The set evokes the play’s classic desolate landscape with nothing but a scrawny, leafless tree and large rock, but designer Francis O’Connor has cleverly framed it all in a way that makes it look like a shadowbox, with stunning moments of densely colored lighting by James F. Ingalls.

Inhabiting this space are a pair of tramps – Vladimir (Marty Rea) and Estragon (Aaron Monaghan) – who have clearly been living rough for decades, and whose codependent friendship has many of the qualities of a long, familiar, often contentious marriage. Vladimir is tall and thin and suffers from kidney problems (to put it discreetly) and bad breath. Estragon is shorter and earthier, and has problems with his feet that clearly are the result of ill-fitting old boots.

The two kill time (which is itself something of a character in the play) by complaining, singing the occasional ditty, remembering bits of poetry, eating some old turnips and a carrot, getting on each other’s nerves, contemplating suicide, and, most crucially of all, waiting for some unknown being by the name of Godot (God, perhaps). Of course he never shows up, but instead sends an angelic little Boy (Zachary Scott Fewkes) to tell the men he will surely arrive “tomorrow.” 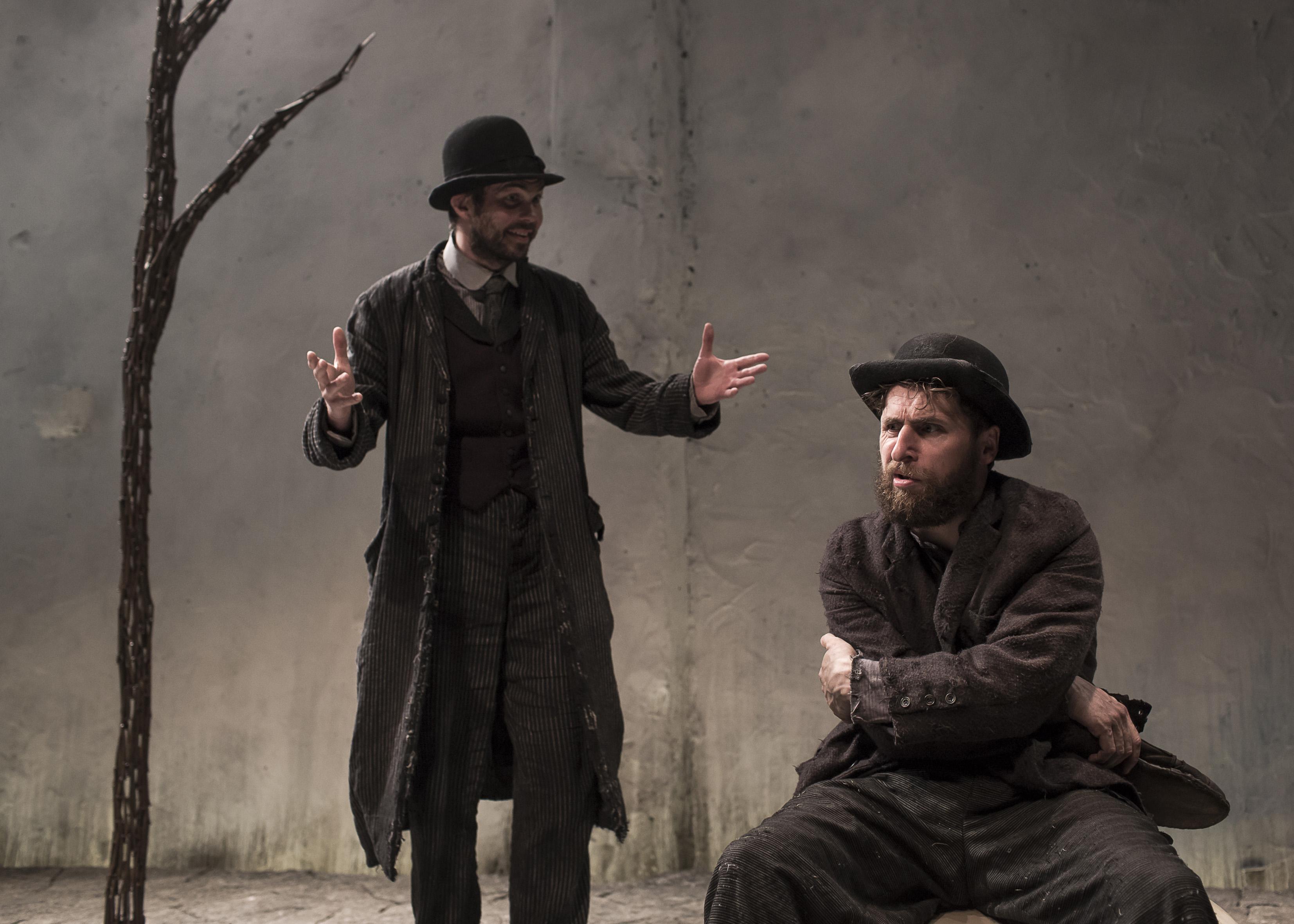 Marty Rea and Aaron Monaghan in “Waiting for Godot.” (Photo by Matthew Thompson)

When asked, the child also says Godot “does nothing” and that he has a beard, and somehow, for these two lost souls he offers a spark of purpose, hope and/or salvation – a reason to “go on,” even if they are essentially stuck in place.

The major interruption in the play occurs with the arrival of Pozzo (Rory Nolan), a big, blustering, fat-cat landowner and his painfully abused servant, the ironically named Lucky (Garrett Lombard), who is weighted down with baggage and held on a noose-like rope leash. This episode (which makes a bit of a return in the second act), is a rather blunt look at the power relationships in the world.

As directed by Garry Hynes, this is an intensely physical rendering of the play that takes Beckett’s infusion of comic relief (by way of a number of vaudeville-style bits, including a shuffling of hats and an acrobatic fitting of boots) a bit too far. Nevertheless, Monaghan and Rea are immensely gifted balletic comics even if from time to time their speech is somewhat muffled. 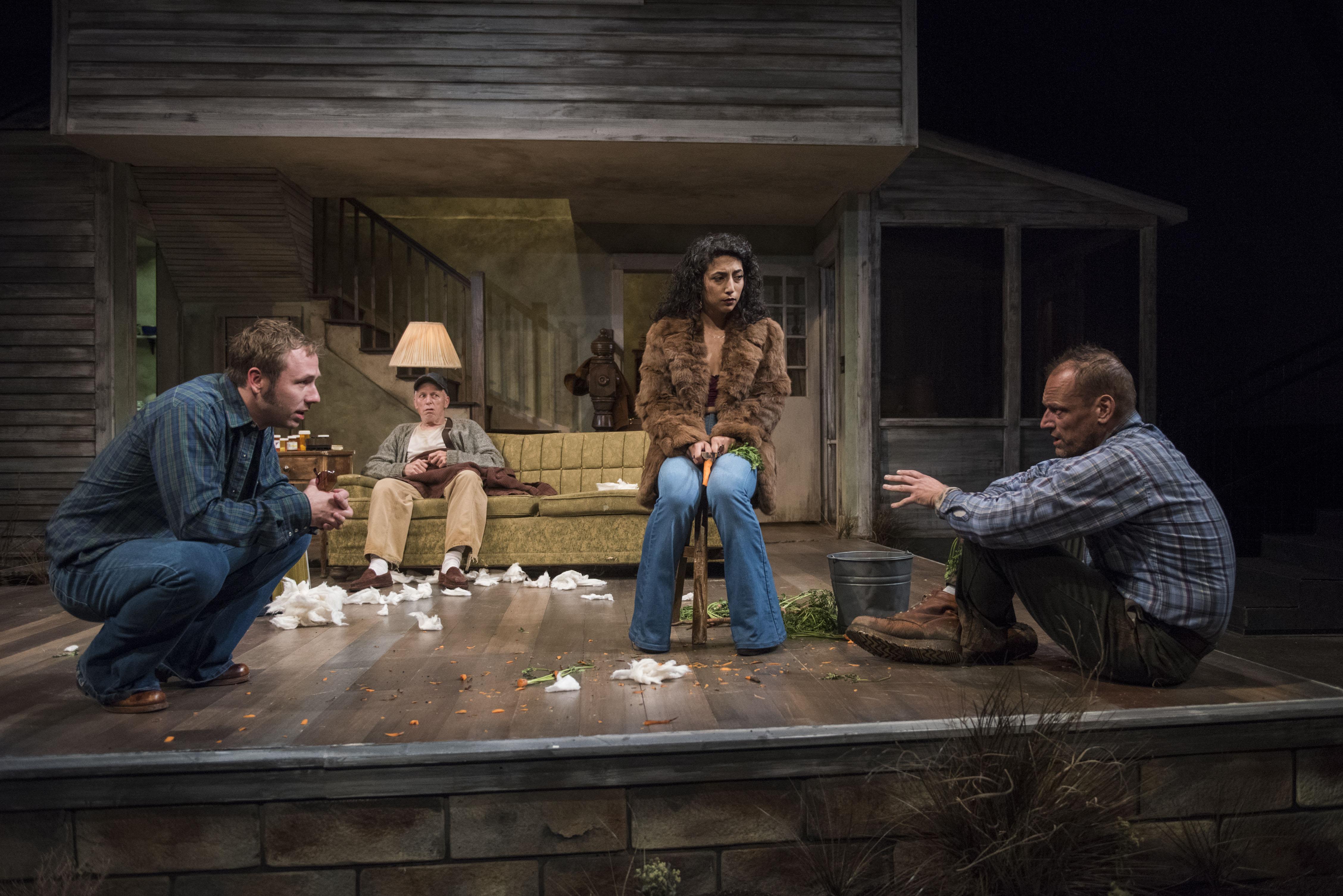 Now, to “Buried Child,” sharply directed by Kimberly Senior, and its story of what no one would mistake for an all-American Norman Rockwell family. What Shepard gives us is a totally fractured remnant of what that might (once) have been just that. Or perhaps it never was.

The setting – a battered farmhouse in Illinois, on land where nothing has been planted since the Depression era – may be more specific than the landscape for “Godot,” but it is no less bleak. (Jack Magaw’s set, expertly lit by Heather Gilbert, is ideal.)

At the center of the calamitous state of affairs is Dodge, a ravaged patriarch in late middle age who depends on pills and alcohol but still possesses a wickedly sarcastic sense of humor. And to be sure, the principal reason to see this production is to watch actor Larry Yando – an actor of electrically charged dramatic and comic instincts – give just the latest of his many brilliant performances in this role. Keep your eye on his mouth alone; whether in a coma-like sleep or a leering glance he makes it speak. 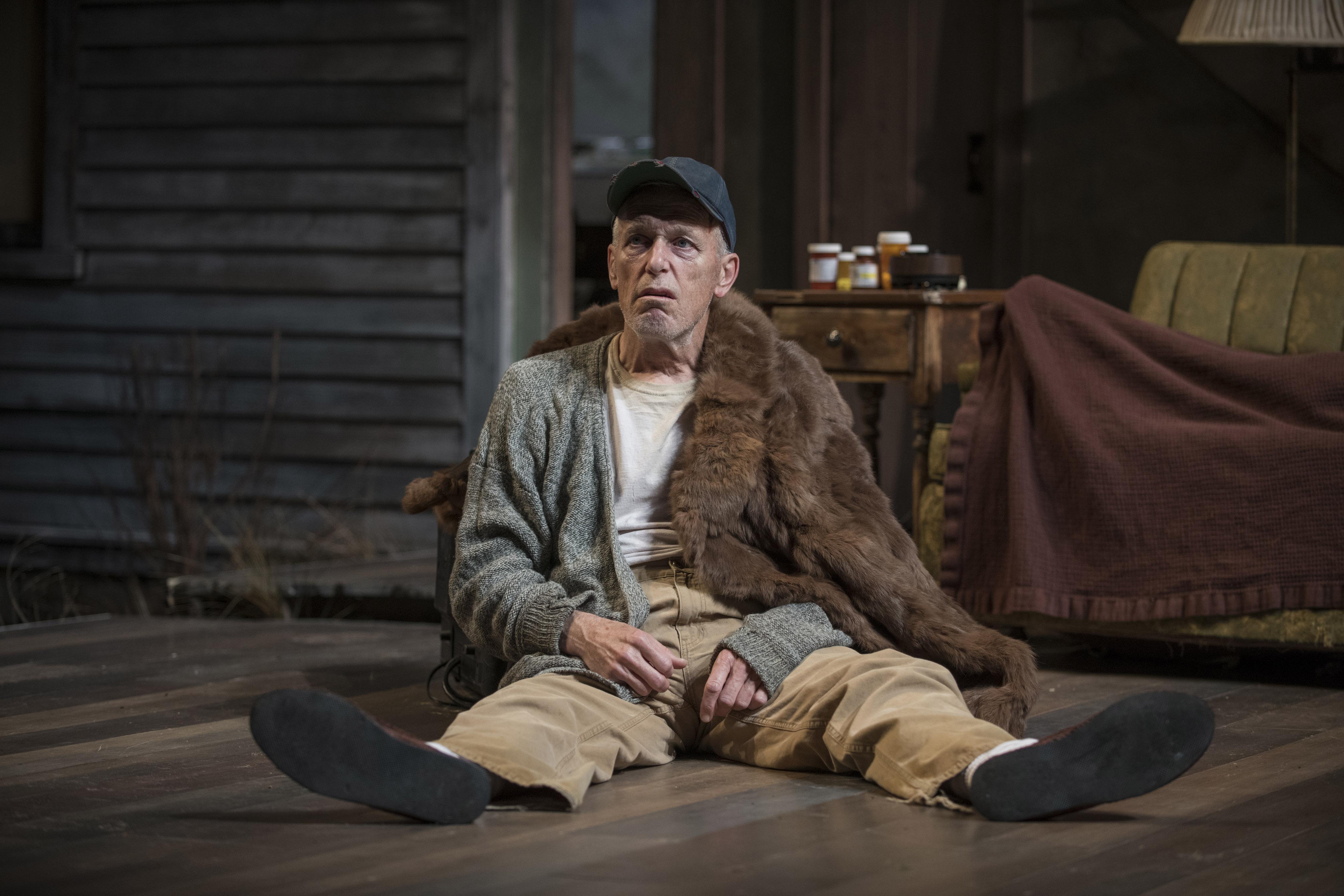 Dodge is married to Halie (Shannon Cochran), and while it might have been a functioning marriage at one point, it has long since devolved into a very dark place. And one of Senior’s most insightful choices here was to cast Halie as a still-sexy woman with few inhibitions (despite her attachment to the church, and to a local minister played by Allen Gilmore). Shannon plays the role to perfection. (It is worth noting that while there are no women in “Godot,” they are of crucial disruptive importance to Shepard, and unlike the men, they do not suffer from debilitating stasis.)

Dodge and Halie had several sons: Tilden (superbly played by Mark L. Montgomery), who clearly has severe emotional problems, and has returned home after time in New Mexico where he “got into trouble”; Bradley (Timothy Edward Kane), an angry amputee with a prosthetic leg, who has a habit of cruelly shaving his father’s head when he is sleeping; and Ansel, the “favorite,” said to have been murdered by his psychotic Catholic wife on their wedding night.

Also part of the family – though not recognized at first – is Vince (Shane Kenyon), who lives in New York, and has decided to stop in to see his grandfather, Dodge, after an absence of many years. He and his sassy, not entirely naive girlfriend, Shelly (Arti Ishak), are driving across the country to see his long-lost father, Tilden, who he still believes lives in New Mexico. It will be a very strange and disorienting homecoming for Vince to say the least. And a very dark secret will be revealed along the way. 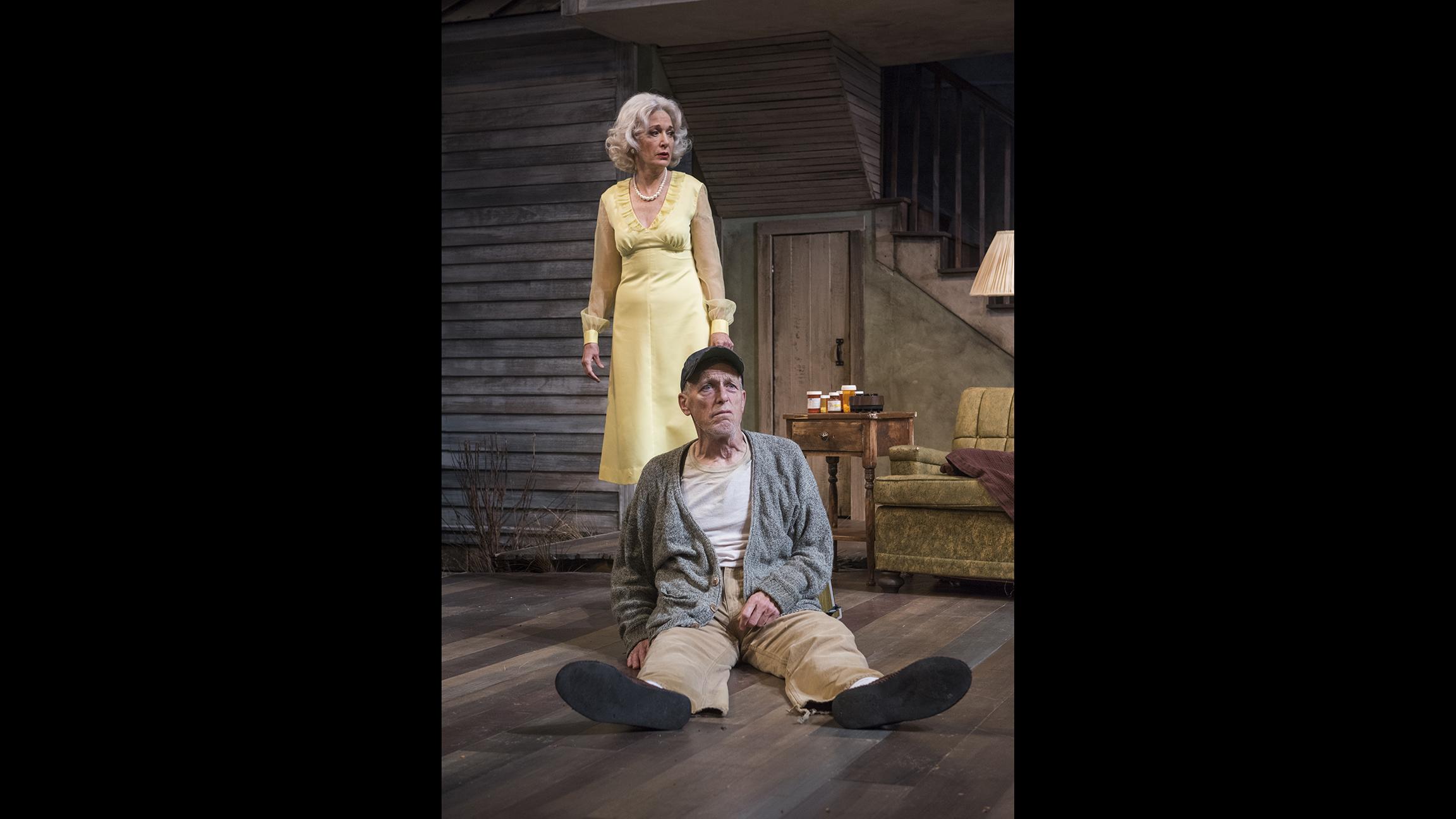 Husbands and wives, parents and children, the destruction of the family and the loss of faith and hope all are in play here. But just as a few green leaves appear on the bare branches of the tree in “Godot,” a crop of corn appears on the farm in Illinois.

Somehow, despite all the psychic pain, all of man’s inhumanity to his fellow man, and all the questions about what the purpose of going on might be, life does go on. And you can now decide which version of this story you want to see unfold on a stage.