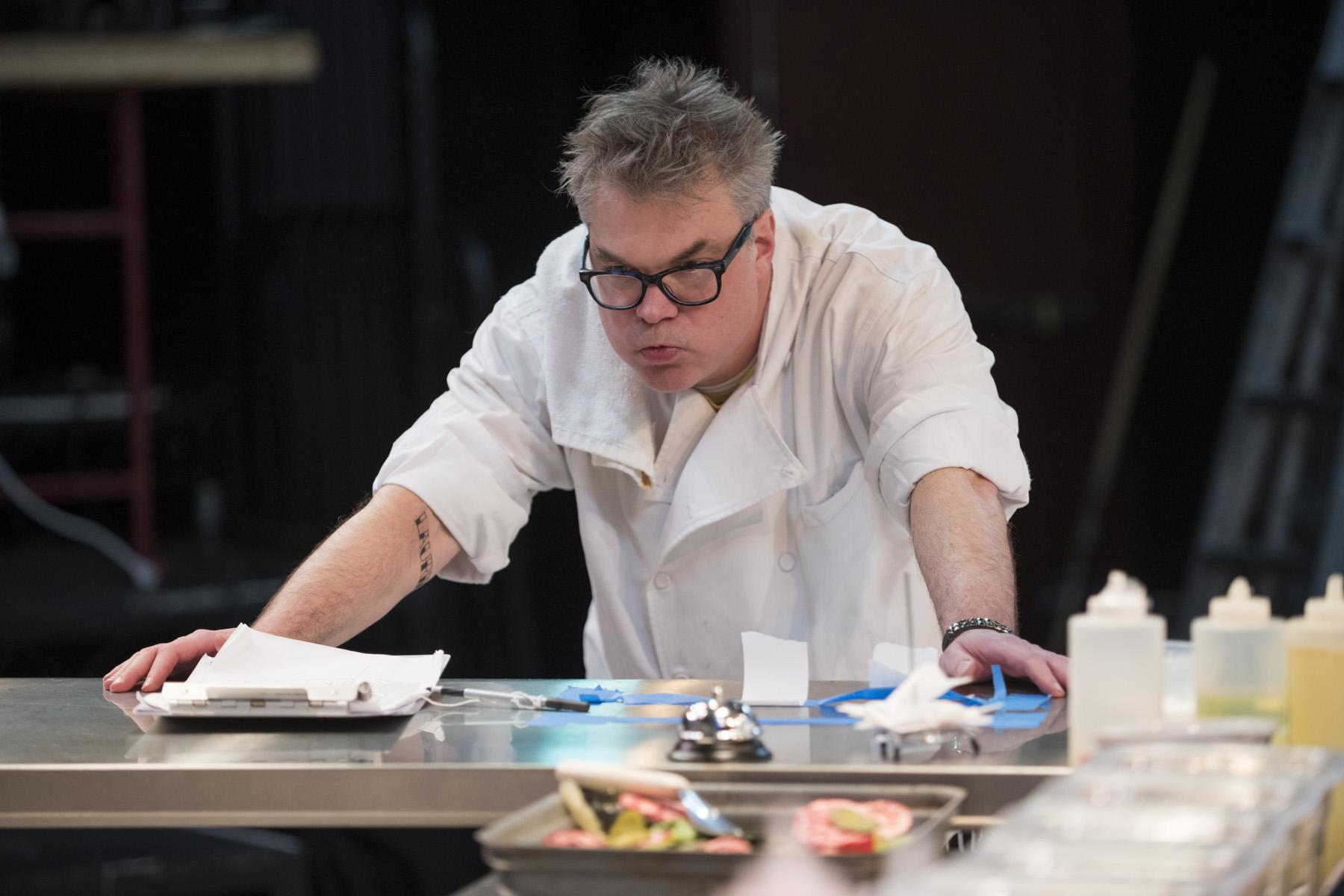 Peter DeFaria in Shattered Globe Theatre’s Chicago premiere of “How to Use a Knife.” (Photo by Michael Brosilow)

Urban restaurant kitchens are renowned for being pressure cooker environments – places where long hours, short tempers, impatient customers and tyrannical chefs can combine to generate more heat than any flame on an industrial stove.

Without question, Will Snider’s “How to Use a Knife,” now receiving an incendiary Chicago premiere by Shattered Globe Theatre, sets the stage on fire as it takes us into the stainless steel industrial kitchen of a burger-and-steak restaurant in New York’s Wall Street district. (Designer Jeffrey Bauer’s set is photo-realist perfection.) And because most restaurants these days depend on a staff that is not just a mix of big personalities, but a great global crossroads of U.S. citizens, green card holders and undocumented residents from a wide array of countries, there is far more to Snider’s story than “rare, medium or well done.” 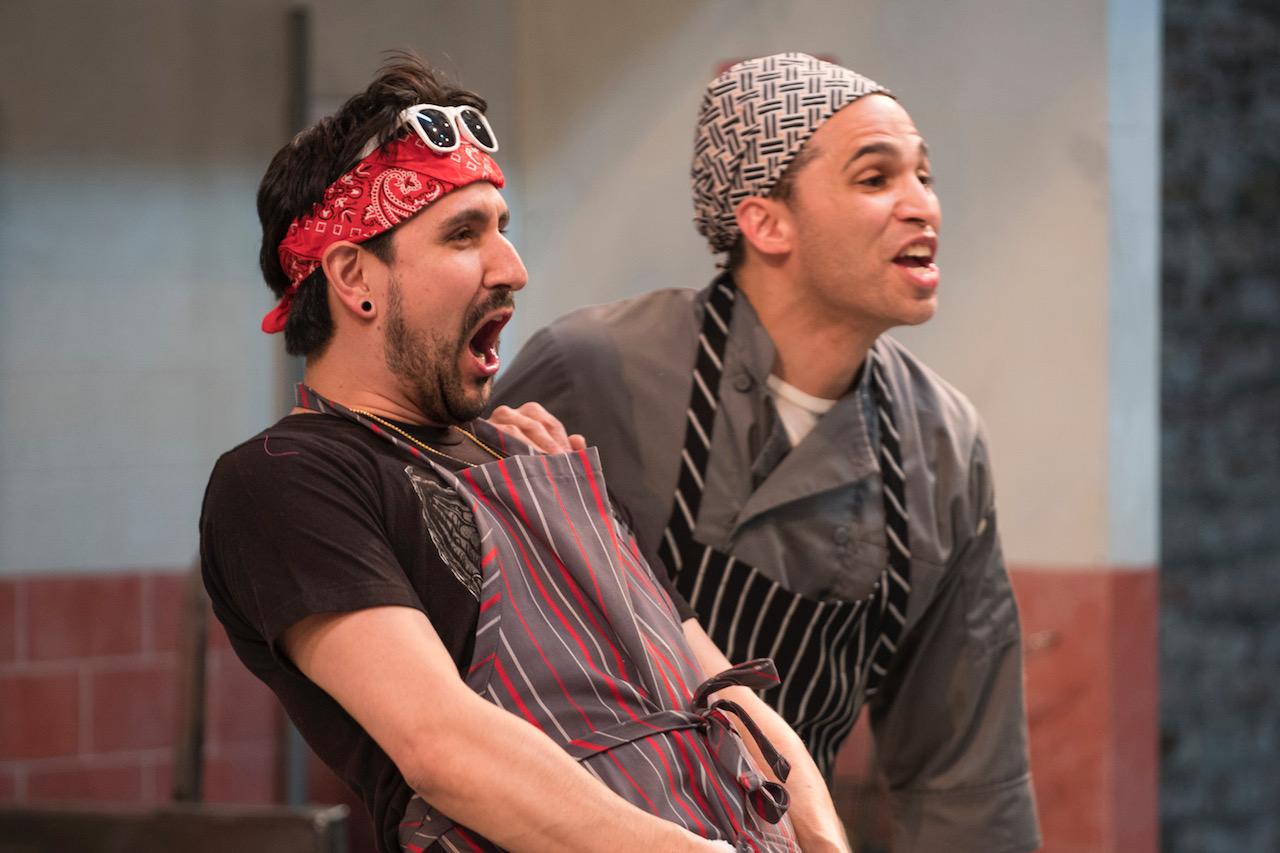 Víctor Maraña, left, and Dennis García in “How to Use a Knife.” (Photo by Michael Brosilow)

This is a tale about loyalty, discipline (or the lack of it), the power of guilt, and the impact of profound moral conundrums. It is about innocence and experience, the nature of secrets, and the destruction and reconstruction of broken souls. Snider provides no easy answers to the questions he raises. There are none. But he leaves you wondering what you might do if faced with similar dilemmas.

The overworked team assembled in the kitchen here includes Carlos (Dennis Garcia), the grill cook, and Miguel (Victor Marana), the prep guy, who can both shift on a dime between Spanish and English while clearly sharing a gift for putting a playful spin on work, whether by breaking into some improvised dance moods, a bit of a pop song or a racy verbal riff.

Positioned at the sink opposite them is the dishwasher, Steve (Anthony Irons), a slender man from Africa (precisely where is only explained later) who maintains almost total silence as he performs his job with an almost zen-like calm. And shuttling between the kitchen and dining areas is the young waiter, Jack (Dillon Kelleher), a wannabe writer, fresh out of college. 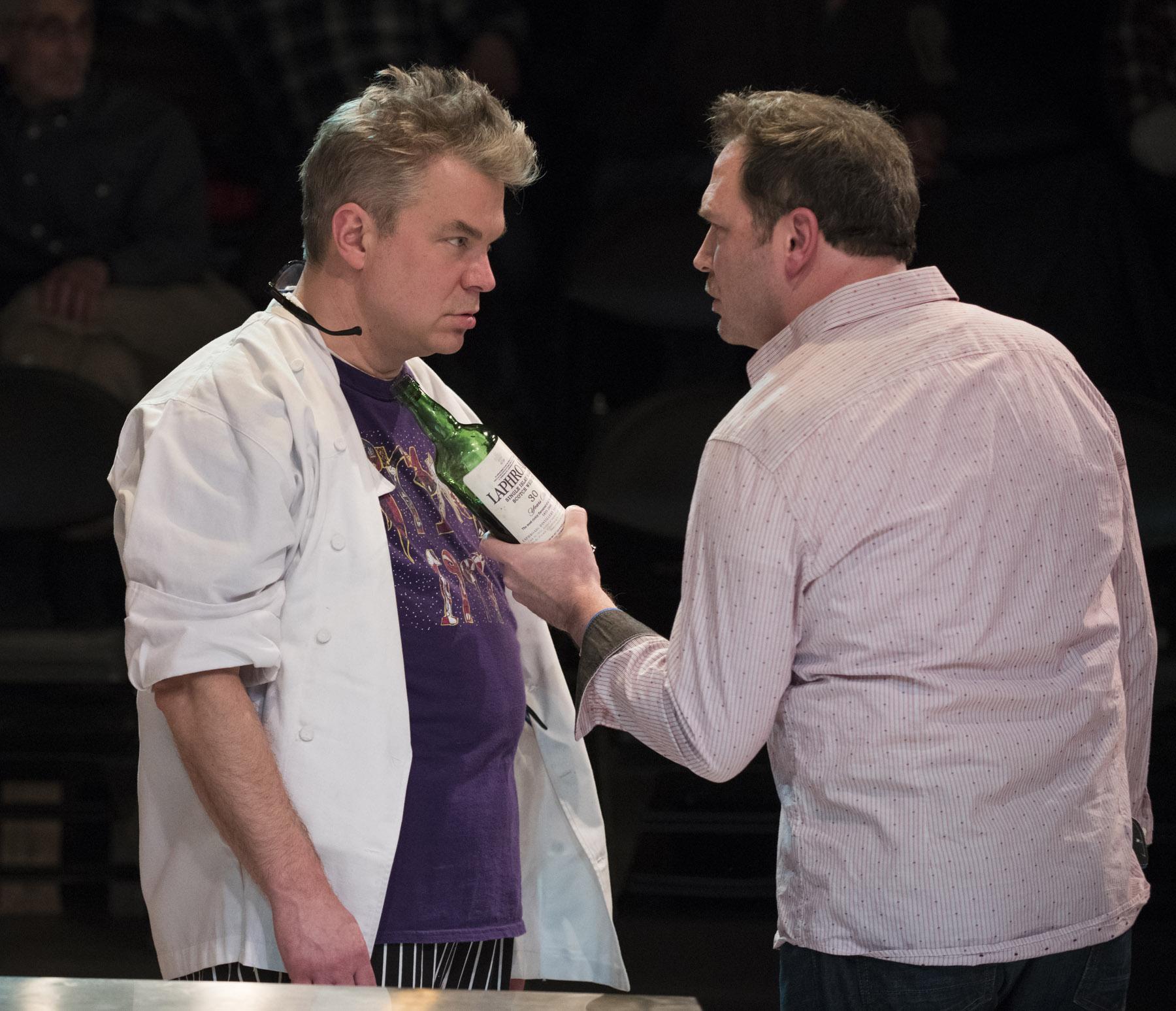 Peter DeFaria, left, and Brad Woodard in “How to Use a Knife.” (Photo by Michael Brosilow)

The restaurant’s owner, Michael (Brad Woodard), is mostly off-site. Aware that his restaurant will never be a foodie paradise, he is successful enough to be able to pay the bills while enjoying a good bottle of wine and trying not to work too hard. But now, in an attempt to help out a former friend and mentor who was once at the top, hit bottom and now needs a job, he has hired George (Peter DeFaria), a formerly highly regarded chef, to take over in the kitchen and maybe raise the level a notch or two.

“Chef George” is tempestuous, to say the least, and approaches his job like a drill sergeant for the Marines. Carlos and Miguel more or less roll their eyes and roll with the punches, while Jack is ruthlessly harassed and Steve says absolutely nothing. Nobody wants to lose their job.

And then Steve finally does speak. He recognizes something of himself in George and teaches him a technique for controlling his outbursts. George returns the favor by teaching him the skills of a top chef.

As it turns out, both men have quite shocking backstories – which should not be revealed here.

And suffice it to say that the tension in the kitchen escalates greatly after the visit of Kim (Michelle Bester), an immigration investigator in search of “a person of interest.” 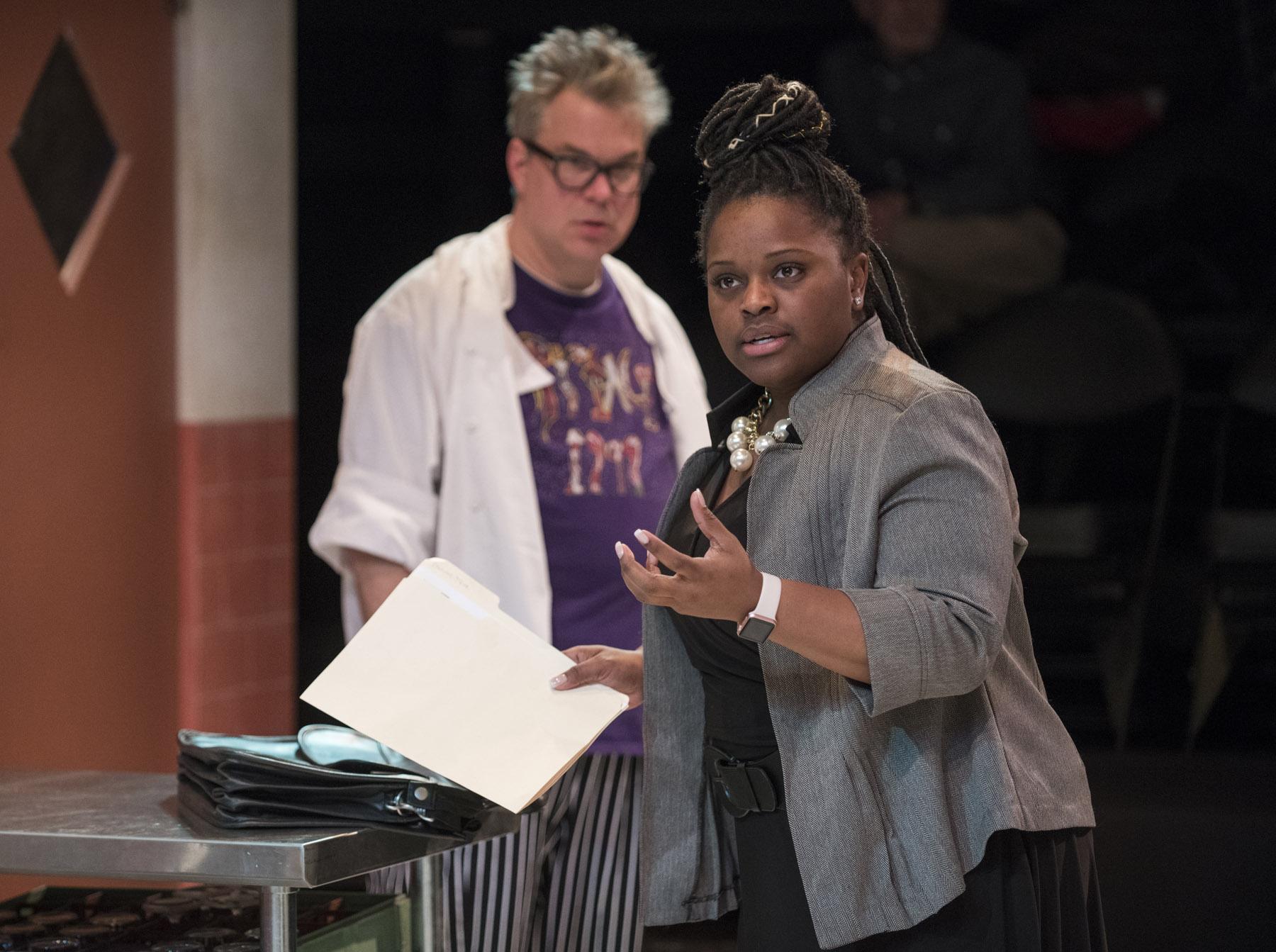 Peter DeFaria and Michelle Bester in “How to Use a Knife.” (Photo by Michael Brosilow)

Snider is a whip-smart writer whose dialogue ideally captures the radically different rhythms, inflections, humor and pain of his characters. And under the sensational, high-wired direction of Sandy Shinner, the actors turn in blistering performances, all the while finessing their kitchen and serving tasks with the ease and speed of veteran restaurant workers.

The terrific interplay between Garcia and Marana is smile-inducing. Kelleher’s naïveté and ultimate anger are just right. And DeFaria is terrifying in his volcanic rages.

But it is Irons, an actor of laser-like focus and subtle but meticulous emotional shading, who casts a spell over the play. He has crawled so fully into his character that it is impossible to take your eyes off him.

Among its several honors, “How to Use a Knife” was named a finalist for a PEN Center USA Literary Award. Based on this exceptional Shattered Globe production alone, it should have won the prize.