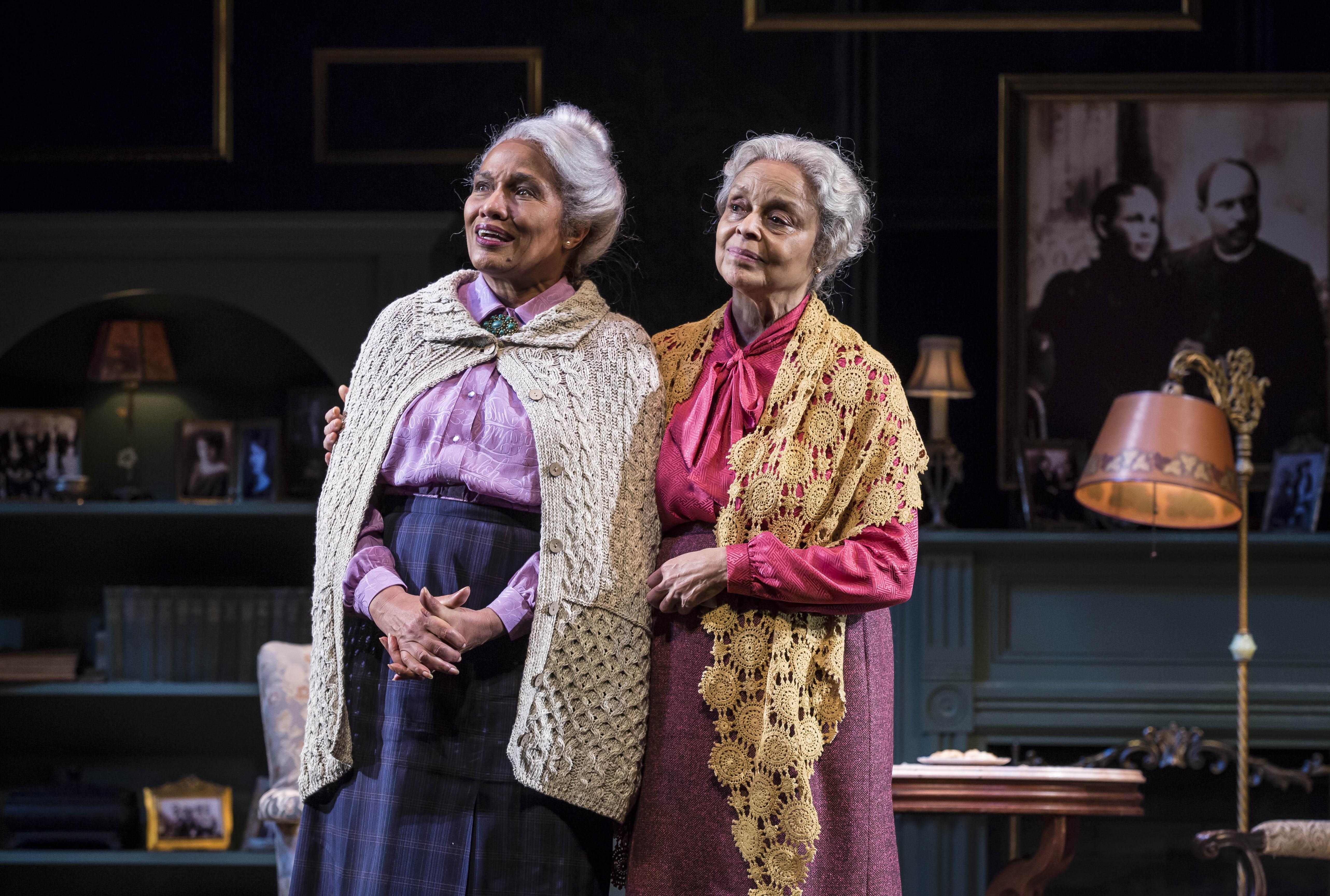 If ever there were a way to remind audiences of what it would really take to “make America great again,” the Goodman Theatre’s revival of “Having Our Say: The Delaney Sisters’ First 100 Years” could easily qualify as the show to get the job done.

The Delanys were very much women OF their time, FOR their time and decidedly AHEAD of their time. And time itself was unquestionably on the side of this pair of renowned sisters – Sadie, the teacher, who died in 1999 at the age of 109, and Bessie, the dentist, who lived to be 104 and died in 1995.

The daughters of a father who was born into slavery but rose to become the first Negro bishop of the Episcopal Church (“Negro” or “colored” were the sisters’ preferred terms when referring to their mixed-race background, which also included American Indian and white stock), the Delanys were women of quite different temperaments. Yet they were inseparable throughout their long and productive lives. And their combination of decorum and grit, along with their powerful but endearing sense of self-worth and determination, combined to create a mighty life force – one that enabled them to move from the Jim Crow era in the South, to the Harlem Renaissance of the 1920s, through the Great Depression, and on into the civil rights era. They witnessed a century of history even as they made some history of their own. And on top of it all, they were canny talkers and storytellers.

Emily Mann’s play (adapted from the 1993 bestselling book of oral history in which the Delany sisters were “debriefed” by Amy Hill Hearth), is an unabashed charmer. And veteran actresses Marie Thomas (as Sadie) and Ella Joyce (as Bessie) – under the fast-paced, unaffected direction of Chuck Smith – easily capture their indomitable spirit as they finish each other’s sentences, prepare a meal, explain the complex nature of their family tree, riff on race and politics and their passion for voting, recount a number of life-changing moments, and sassily note that one of the keys to their longevity was that they never had husbands.

Of course they had each other, along with their beloved parents and many siblings. They took immense pride in their work and their status as middle-class professionals. They never forgot the “church values” with which they were raised. They were notably frugal, yet never missed an opportunity to help those less fortunate. And while they had no interest in having a telephone (even though they could afford it) they were great communicators. 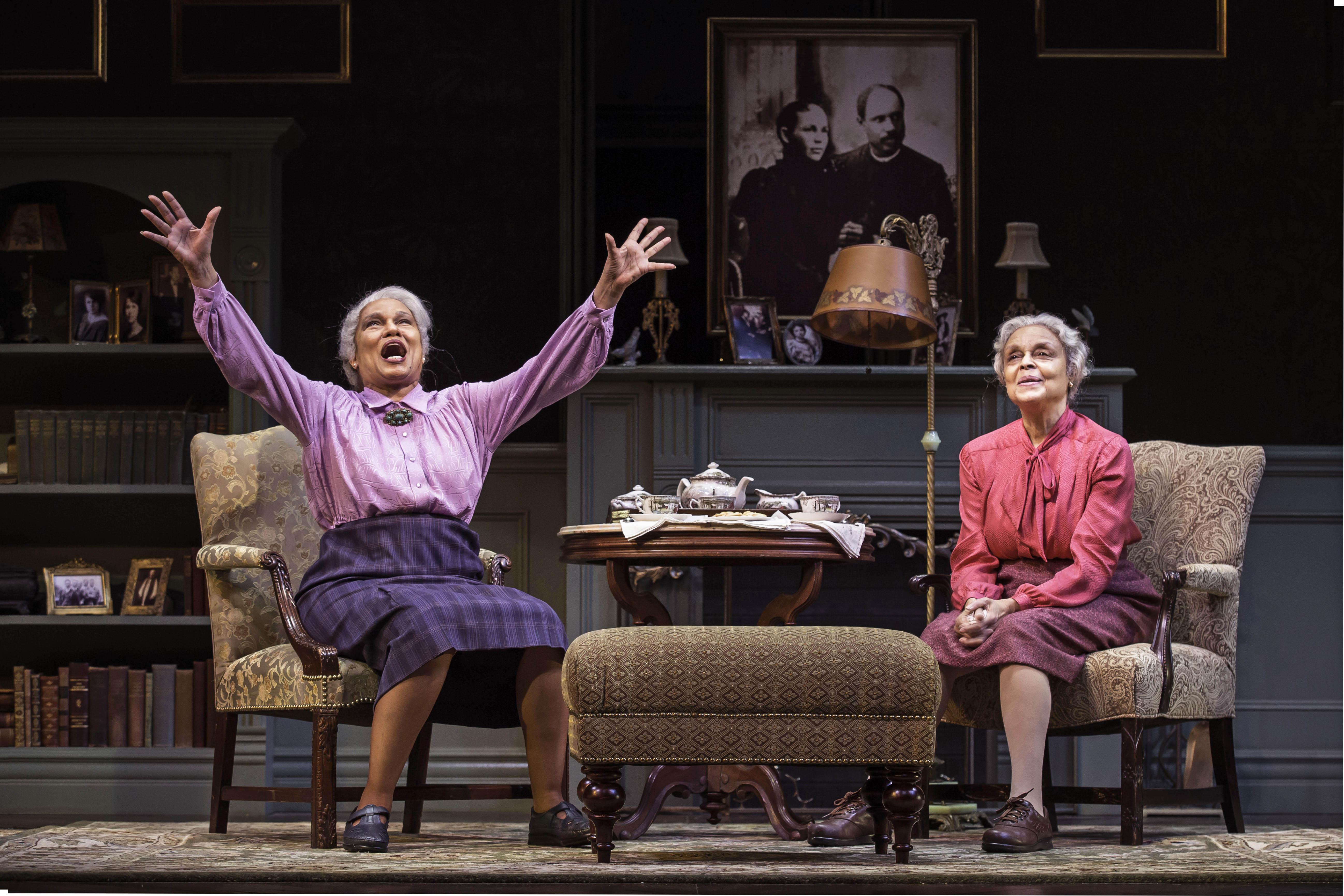 Bessie (1891-1995), the older of the two, was the more restrained and proper one, and very much her mother’s daughter. She became the first African-American permitted to teach “domestic science” in the New York public school system.

Sadie (1889-1999), was the firebrand, emulating her politically engaged father. She became the second African-American female dentist licensed in New York state, and proudly notes that she never changed her fees and kept her practice going throughout the Depression.

The two women were, as they confess early on, like molasses and vinegar. Yet for all the many decades after they left their parents’ home (a happily sheltered existence on the Raleigh, North Carolina, campus of the St. Augustine School where their father was vice principal) they shared a Harlem apartment, and then a house in the New York suburb of Mt. Vernon. (All these locations are artfully suggested by Linda Buchanan’s handsome turntable set, with Mike Tutaj’s projections of many archival photographs adding historical heft.)

There is an almost musical interplay between Joyce and Thomas that ideally captures the sisters’ relationship, and all the feistiness, humor and determined individuality they brought to it. And they make it easy for you to cheer the Delanys, who proudly declare that they never let prejudice stop them from doing what they wanted to do in their lives.

To quote Sadie: “Life is short, and it’s up to you to make it sweet.”