Last week, the Doomsday Clock edged 30 seconds closer to midnight, putting the world two and a half symbolic minutes away from global annihilation.

One of the reasons the Bulletin of the Atomic Scientists' clock was set closer to catastrophe is President Donald Trump's statements on social media that he wants to expand America's nuclear arsenal, inciting fears of setting off a nuclear arms race.

Iran has been formally PUT ON NOTICE for firing a ballistic missile.Should have been thankful for the terrible deal the U.S. made with them!

Is the way the world ends not with a bang, but with a tweet?

Host Phil Ponce talks about the ticking clock with Rachel Bronson, executive director and publisher of the Bulletin of the Atomic Scientists.

Below, a Q&A with Bronson.

The last time we were under three minutes to midnight was 1953, in the early years of the Cold War. Are you seeing parallels between now and then?

We’re seeing this as a very dangerous moment where there’s a lot of unexplored territory around what the effects of some recent decisions have been. We’ve seen really challenged relations between the U.S. and the Russians, which is actually why we moved the clock from 5 to 3 minutes to minutes in 2015. When we moved in 2015, we moved because we thought the issues were urgent and dangerous. Around nuclear issues, the deterioration in the U.S. and Russian relationship and global reinvestment in nuclear arsenals was very disconcerting. Around climate change was a complete lack of international response to climate – that was in 2015. So when we set it for 2017, it was a darkened security landscape in addition to the factors that we highlighted in 2015.

The parallels between 1953 and 2017 are the difficult relationship between the two countries that now own more than 90 percent of the world’s nuclear weapons and being on the precipice of what looks to us like a significant arms race. We’re going in the wrong direction. Why we moved in this past year was all of those same things that moved the clock with two new additions – a recklessness and a disregard for language and institutions around nuclear stability, and a disregard for technical expertise on topics that require it. That’s why we took the unprecedented step of moving it 30 seconds. We’re very mindful that actions speak louder than words and that across our history we’ve always made the judgment based on actions.

We really want to underscore that words matter. In terms of the Supreme Court nominations, the president said he’s a man of his word – he’s taking his word very seriously, and we should take it seriously. The way this is playing out in the nuclear space – we have a National Security Council statement that’s put Iran “on notice.” It was a very amateurish piece of work and it goes against normal diplomatic code. It’s a very aggressive statement in response to Iranian ballistic missile tests.

This president campaigned on tearing up the Iran deal. For those of us who watch nuclear issues, most of us thought that was a very good deal, and that controversial as it was, it made us safer in the short term and there was opportunity to make us safer in the long term. But we’re on the cusp of ripping that thing up – just like the president promised. There’s a lot that individuals can do in this space that they probably couldn’t do in the past, and a lot they can do in terms of encouraging their representatives in terms of where were going to spend our money and what kind of international agreements are worthy of our support.

Can a tweet actually start an arms race, or is this just bluster? Do other countries take things like this seriously?

Other countries need to respond to what they’re hearing. They’re not going to sit around and wait to see what we do. So what we do know, and I think the U.S. administration is comfortable with this, is all of the American doubt around the Iran deal during the campaign has fed into Iran’s domestic politics about who they need to put up as they go into their presidential election, and it is affecting their domestic politics.

We have seen that taking a call from Taiwan has caused the Chinese to respond in the South China Sea, so we know that others are watching very carefully what the U.S. does, as the administration would hope. That’s every administration’s hope: that their statements are taken seriously. We know history – it’s action and reaction – you need to be very careful about what action you’re pursuing.

Do you feel like governments pay attention to the Doomsday Clock? What kind of reaction are you hoping to get?

The power of the clock is it takes enormous amount of expertise and issues about the health of the planet and the safety of the planet and reduces it to one very simple number. It spurs a conversation of is the planet healthy or not, how would you judge that, do you think we got it right?

We think we really had an impact. If it causes people to rethink their roles in holding their leaders’ feet to the fire on these issues, we think we’ve had a role.

Are we just sowing panic? These are apocalyptic terms and we’re saying it’s ever closer. We have gotten important letters on this. Our goal is to say we’ve been as close as two minutes to midnight, as far as 17 minutes, and the difference isn’t the technological advancements, it’s the political leaders’ ability to create international agreements that reduce the stockpile of nuclear weapons or in the case of climate, get us closer to keeping within lower temperature rises.

We know that individuals can make a difference and encourage our leaders away from midnight – it’s not a steady drumbeat towards, we have oscillated. If we can help focus the conversation, we would love to move the hands of the clock backwards. We’ve done it many times before, as many times as moving it forward – as well as engagement to help us get there is hopefully motivating rather than defeating.

Outside of the U.S., are things moving in a more positive direction? Is the U.S. the biggest driver of the concern?

The five to three minute move was really an international assessment – which was, we were very concerned about what’s going on in Russia, very concerned that the use of nuclear weapons is built into their battle plans, and that every nuclear country around the world is investing very heavily in their nuclear arsenal.

So the U.S. is about to launch its modernization program, the Russians are investing in it, the Pakistanis have the fastest growing [program], and the North Koreans are clearly seeing this as an important part of their diplomacy and national power. The landscape is not looking particularly positive, we don’t anticipate reductions between the U.S. and Russians like we saw in 2010, even though experts on both sides say that we can continue to reduce nuclear stockpiles and not at all effect the existing strategies of mutually assured destruction that all our strategies are based on, so we don’t need what we have to do what we say we’re going to do. We can reduce but instead we’re investing significantly.

On the nuclear issues it’s not a particularly bullish moment. Mikhail Gorbachev had a piece in Time magazine where he said it says it looks like we’re on the precipice of a new arms race, so it’s not just on the U.S. side.

On the climate side, we were very bullish around the Paris climate agreement. We called it out as a bright spot [but] we didn’t move the clock backwards, and the reason we didn’t move it backwards was because all the prep had been done but it hadn’t been signed. But even so, it’s voluntary, and even if everyone hits their targets it’s unlikely to keep the planet warming at or less than two degrees, which has been the goal. And then we just had the next round of climate negotiations in Marrakesh and not much got accomplished. We’re not optimistic in the next few years, the U.S. has to be a leader in that to have the world come around. It’s not all up to the government, there are things that cities and companies can do.  There are things other countries are doing, but the global leadership, we don’t feel as bullish about it as we did in 2016. 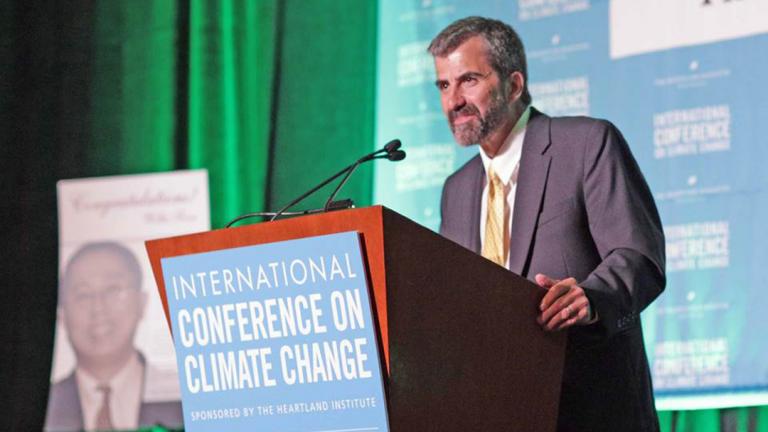 Jan. 31: With an audience of officials appointed by President Donald Trump, the Heartland Institute has its best chance in years of “Resetting U.S. Climate Policy,” which is also the theme for its upcoming International Conference on Climate Change.

Jan. 30: The White House pushes back against criticism of President Donald Trump’s travel ban. Is the executive order a big setback for counterterrorism efforts?