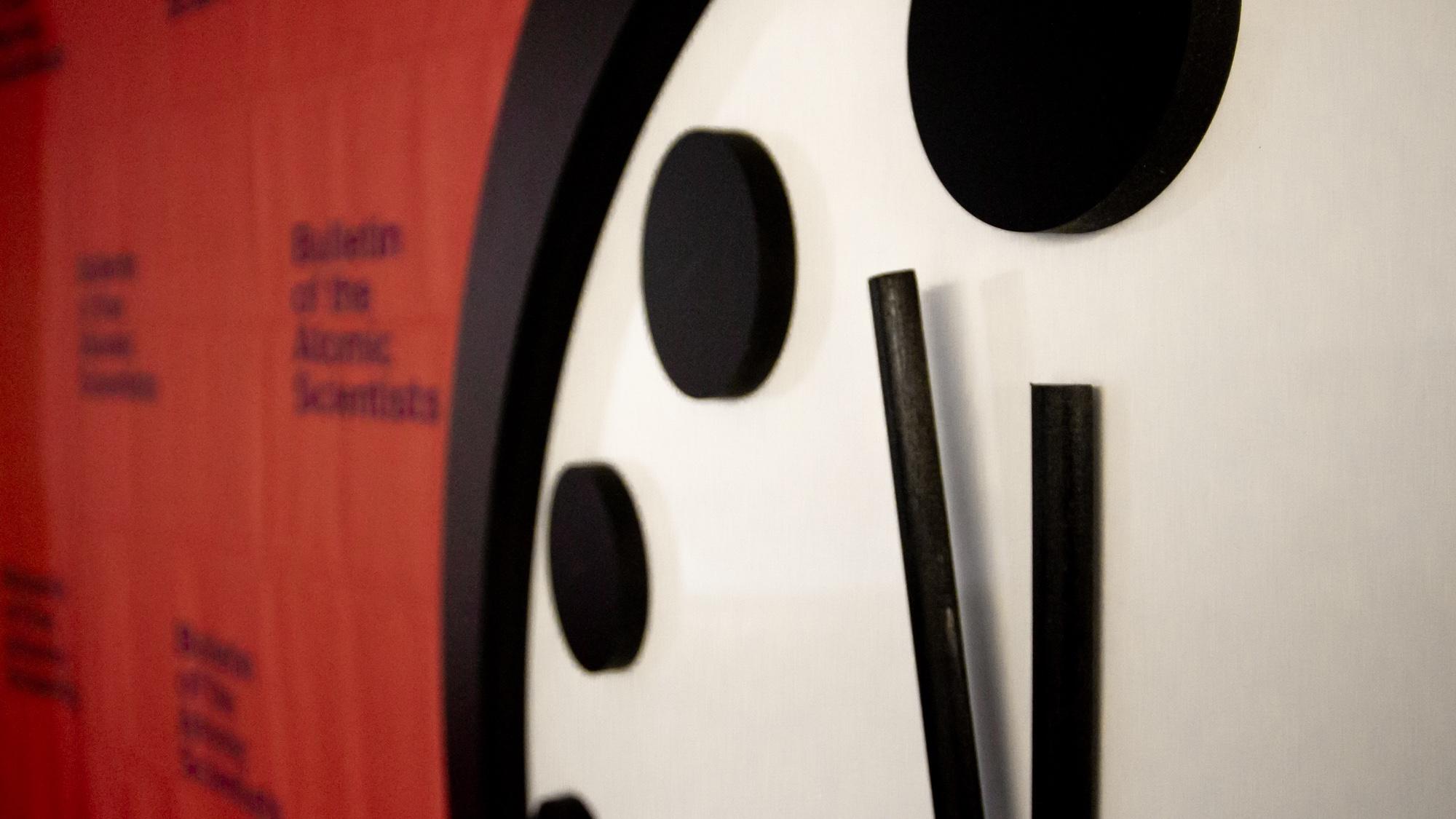 The Doomsday Clock is set at 100 seconds to midnight. (Courtesy of Bulletin of the Atomic Scientists)

The world has entered into the realm of a two-minute warning, with the hands of the Doomsday Clock remaining fixed at 100 seconds to midnight for the second year in a row, the closest in the clock’s 73-year history.

The Bulletin of the Atomic Scientists revealed the clock’s position — its annual indicator of the world’s vulnerability to catastrophe — on Wednesday morning.

Little progress has been made to alleviate the civilization-ending threats of nuclear weapons and climate change, and the COVID-19 pandemic provided a wake-up call that national governments and international organizations are ill-prepared to handle a global crisis, said Dr. Rachel Bronson, president and CEO of the Bulletin of the Atomic Scientists.

Influential leaders have denigrated complex threats, undermined cooperation, ignored science and abdicated their responsibility to protect the health and welfare of their citizens, Bronson said. “It’s been a disastrous succession of falling dominoes.”

In addition to the pandemic, the world’s superpowers continue to modernize their nuclear arsenals, and arms control talks have stalled. A “maelstrom” of misinformation and disinformation makes it difficult to accurately convey risks to the general public, and climate change is at a dangerous crossroads, according to members of the Bulletin of the Atomic Scientists’ Science and Security Board.

“We cannot afford to waste any more time,” said Ellen Johnson Sirleaf, co-chair of the WHO Independent Panel for Pandemic Preparedness and Response and the former president of Liberia. “Future generations will not understand or forgive our inaction.”

Recalling how the United Nations, World Health Organization and United States teamed up to stop the spread of Ebola in Africa, Sirleaf said, “Imagine if similar resolve had been shown” when COVID-19 emerged.

There are bright spots, though, Bronson said, which is why the Doomsday Clock hands weren’t moved even closer to midnight.

Messaging surrounding climate change is beginning to break through the noise, for one, with people showing a responsiveness to calls for individual action.

As with wearing masks, we’ve seen that individual decisions, when aggregated, can make a powerful difference, Bronson said.

At the core of its assessment, the members of the Science and Security Board believe that the greatest threats to humanity are of its own creation. And as such, Bronson said, “We can fix it.”

Among the high-level recommendations made by the Bulletin of the Atomic Scientists to turn back the Doomsday Clock:

—The U.S. and Russia can and should extend New START treaty for as long as possible, keeping the two largest nuclear arsenals at current levels. New START, signed in 2010 and set to expire this year, placed limits on the number of deployed warheads and launchers, among other conditions.

—The U.S. should accelerate its commitment to decarbonization and put policies in place that make the attainment of the commitment feasible.

—The U.S. should work with the WHO and other international institutions to reduce biological risks of all kinds.

The Bulletin of the Atomic Scientists was founded in 1945 by Albert Einstein and University of Chicago scientists who helped develop the first atomic weapons in the Manhattan Project. The Doomsday Clock was created two years later to convey threats to humanity. The furthest the clock has been from midnight has been 17 minutes, where it was placed at the end of the Cold War.