The world is closer to global catastrophe today than at any point since World War II, according to a group of international nuclear and climate scientists.

Since 1947, the Chicago-based Bulletin of the Atomic Scientists has operated the Doomsday Clock, which it uses to gauge how close humans are to destroying the world.

The organization announced Thursday that the clock will now be set at 100 seconds to midnight, 20 seconds closer than at any time since it was first established.

“With the risk of nuclear accident seemingly growing by the day as the time available to responsibly stem the climate crisis shrinks just as quickly, the time on the Doomsday Clock continues to tick ever closer to midnight,” said Bulletin President and CEO Rachel Bronson.

The Doomsday Clock is set every year by the Bulletin’s Science and Security Board, which meets in November to determine whether the time will be changed. The findings are announced each January.

“What we have called the new abnormal last year, a dismal state of affairs in the realms of nuclear security and climate change, now has become an apparently enduring, disturbing reality,” said Robert Rosner, who chairs the Bulletin’s Science and Security Board. “Things are not getting better.”

Rosner also cited concerns over what he called information warfare, which he says are “subverting our ability to arrive at a consensus on the solutions needed to achieve positive change.”

Historically, the Bulletin has been primarily concerned with the threat of nuclear destruction, which continues to inform their calculus for the latest Doomsday time. 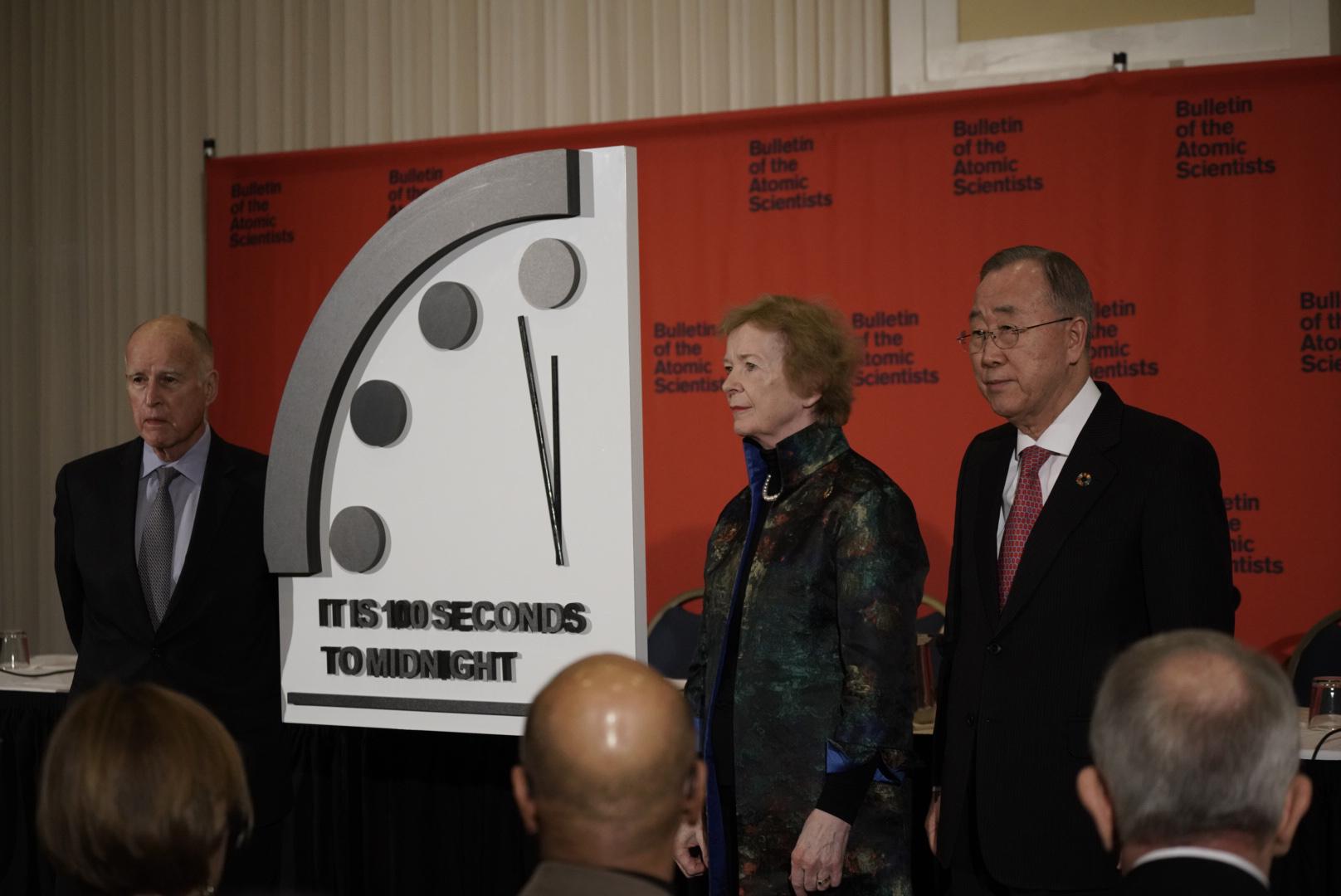 “We are rapidly losing our bearings in a nuclear weapons landscape that may appear beyond our recognition,” said Sharon Squassoni, an expert on nuclear proliferation who serves on the Science and Security Board.

Squassoni cited several major nuclear-related concerns over the past year, including Iran ramping up its nuclear program, the collapse of substantial talks between the United States and North Korea, and a lack of cooperation between the U.S. and Russia on arms control.

“Without conscious efforts to reinvigorate arms control, the world is headed into an unregulated nuclear environment,” Squassoni said. “No one should want a return to the intense arms race that characterized the early decades of the nuclear age, yet the means are there.”

Since 2007, the Bulletin has also considered climate change as an equally disturbing global threat, and stressed the issue with renewed urgency in this year’s announcement.

“Greenhouse gas pollution continues to rise, reaching record levels this past year. Science and plain arithmetic are clear: emissions need to head toward zero. There is no question this is an emergency,” said Sivan Kartha, a scientist at the Stockholm Environmental Institute and a Science and Security Board member.

Daniel Holz, a member of the Bulletin’s Science and Security Board, joins “Chicago Tonight” on Thursday to discuss the announcement.