Gov. Bruce Rauner has vetoed legislation that would have provided Chicago Public Schools with $215 million in pension relief funding, blowing a massive hole in the district’s 2017 budget less than a week before it was scheduled to be voted on by the Chicago Board of Education.

District, board and Chicago Teachers Union leaders had all expressed hope in recent weeks the governor would sign SB 2822, which sailed through the state Senate and House, to cover the estimated cost of CPS fiscal year 2017 pension payments.

In a veto message Thursday morning, Rauner said the agreement to pay CPS was made on the condition that sweeping pension reforms would be made at the state level. But as that has not yet happened, he said tax dollars cannot continue to be “wasted on bailout after bailout.”

“The taxpayers of Illinois want a balanced budget,” Rauner said. “That can only be done if we address the structural imbalances that have bankrupted the State and CPS alike and drain resources that should be spent on other priorities, like improving schools and funding social services.

“The taxpayers of Illinois do not want just another bailout. Let’s get back to work to end the budget impasse and put Illinois on the right track once and for all.”

The Board of Education had approved the district’s fiscal 2017 budget on a unanimous vote earlier this fall. But after CPS and the teachers union reached an agreement on a new labor deal, that budget had to be revised and re-ratified.

That vote is set for next Wednesday’s board meeting.

Though a balanced CPS budget depended on that money coming from Springfield, the Chicago Sun-Times reported that as of Wednesday night, the district had no contingency plan in place in the event of a veto.

Following a senate vote to override the veto Thursday afternoon, CPS CEO Forrest Claypool said his office will focus its efforts on fighting for a similar decision in the House to reverse Rauner’s “impulsive and reckless” actions.

“We are committed to working with leaders in Springfield to generate equitable funding for CPS,” he said at a press conference, “and we will not sit back as the governor attempts to make CPS students the casualty of his unrelated political agenda.”

Claypool wouldn’t get into specifics on the district’s backup plan other than to say CPS plans “all the time for contingencies and emergencies.”

But with state funds disappearing, that could mean midyear classroom cuts coming for district staff.

“If and when it should come to that,” he said when asked of possible cuts, “we will keep you informed of the details of what actions we will take.”

Rauner said an agreement between state Democrats and Republicans was made over the summer on the condition Dems re-engaged in “serious, good faith negotiations” on pension reform. 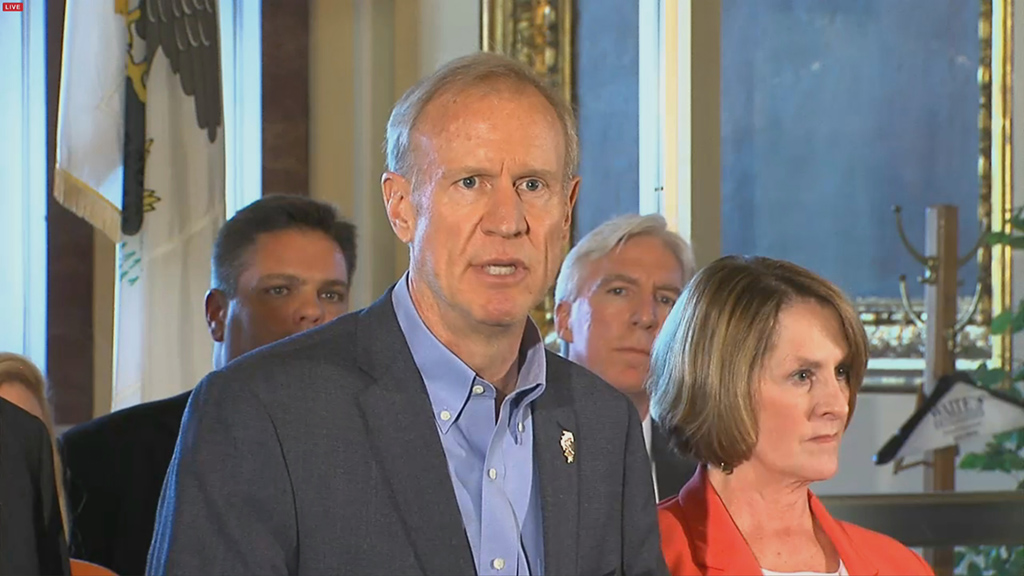 “Despite my repeated request for daily negotiations and hope to reach a comprehensive agreement by the end of next week, we are no closer to ending the impasse or enacting pension reform,” he wrote.

Senate President John Cullerton responded Thursday afternoon, saying he was “thoroughly disappointed” by what he sees as a shortsighted move that could result in thousands of layoffs for CPS teachers and staff.

“I’m shocked and disappointed by his actions today,” he said. “Chicago had taken steps to increase local responsibility and reform pensions. Two more pension system reforms are pending in the General Assembly. From where I stand, we were moving forward.”

Mayor Rahm Emanuel took that criticism one step further, calling Rauner’s decision “reckless and irresponsible” and saying it’s the children who will pay the price.

“The governor is lashing out,” Emanuel said in a statement, “imperiling the system-wide gains earned by Chicago students and teachers, and proving just the latest example of his willingness to put the burden of his failures on the backs of the state’s most vulnerable citizens, whether it’s schoolchildren, college students, seniors, or those living with disabilities. This is no way to run a state.”

CTU President Karen Lewis said Wednesday she was hopeful the funding would come through, while board President Frank Clark said earlier this week he was “more optimistic than others” that the bill would be approved.

In a statement Thursday, CTU derided the veto, saying the decision jeopardizes the education of thousands of children depending on state assistance.

“Chicago’s public schools have suffered from irreparable cuts, including cuts to essential special education funding,” the union statement reads. “Today’s veto should be a wake-up call to Mayor Rahm Emanuel to denounce the governor and use his influence with the financial sector to make good on promises to fund our schools.”