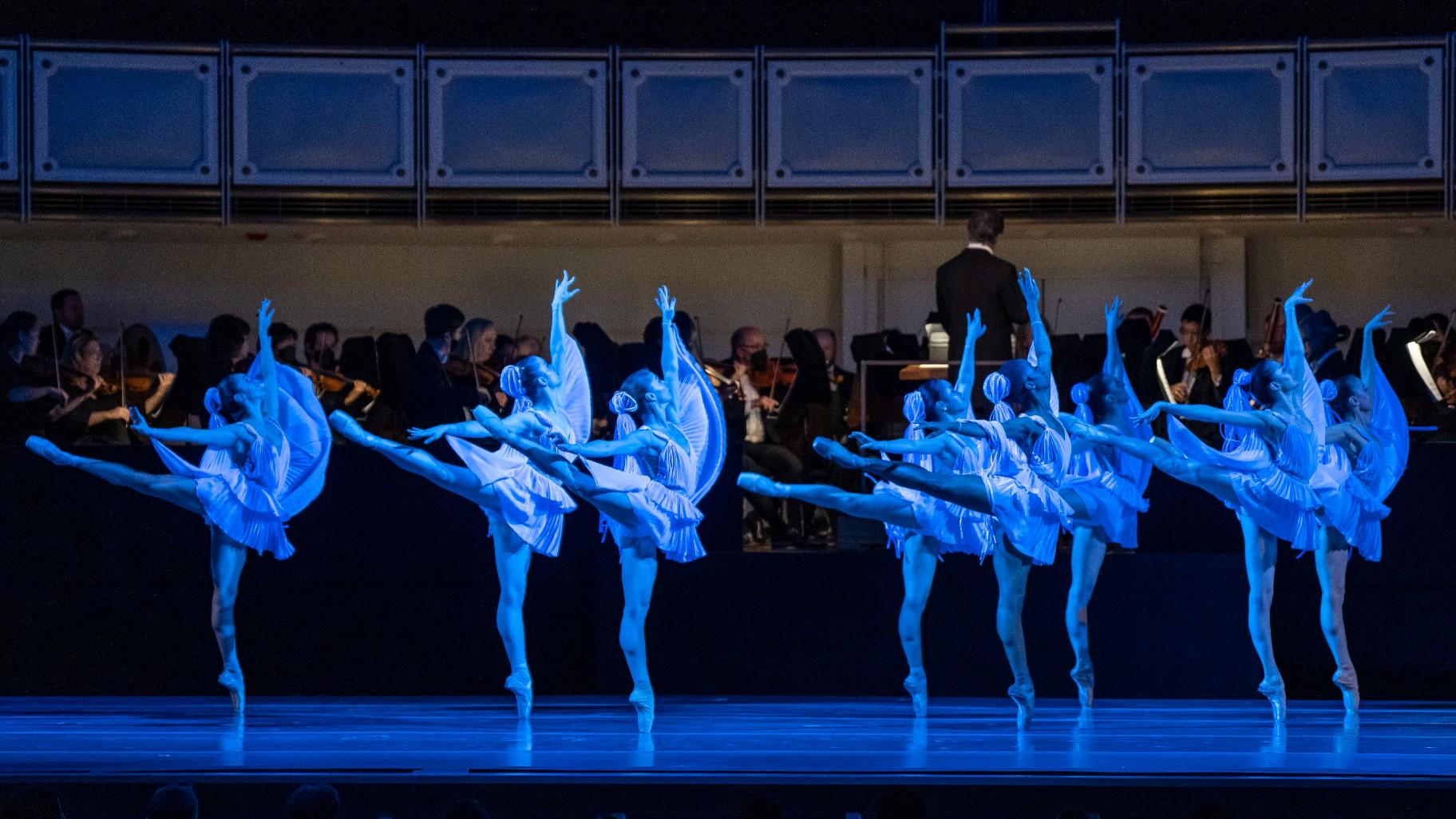 The Joffrey Ballet performs the world premiere of the newly-commissioned “Platée” with choreography by Annabelle Lopez Ochoa set to Rameau’s Suite from Platée performed by the Chicago Symphony Orchestra with conductor Harry Bicket. (Credit: Todd Rosenberg)

It was an evening of sheer, unadulterated delight as the Chicago Symphony Orchestra joined forces with the Joffrey Ballet on Thursday for a pair of world premieres of brief but brilliant works by Cathy Marston and Annabelle Lopez Ochoa, two exceptional choreographers, both of whom possess exceptional storytelling gifts.

The first half of the program featured the CSO, led by guest conductor Harry Bicket, artistic director of the English Concert, who is renowned as a masterful interpreter of baroque and classical music.

Elegant and understated, Bicket led the orchestra in exquisite renderings of Mozart’s “Symphony No. 34 in C Major” (capturing its exuberance, lyrical beauty and speed), and Ravel’s dreamy, easily enchanting suite, “Le tombeau de Couperin” (written as a tribute to the victims of World War I, and, ideally timed to be played on Veterans Day). In both pieces, the strings, winds and small contingent of brass in the somewhat reduced orchestra were superb.

For the second half of the program the musicians moved far upstage, leaving most of the stage (covered with a special surface fit for dancing), free for the two ballets that served as vivid reminders that the Joffrey’s dancers are notably gifted actors, too.

First came Marston’s “Heimat” (the German word for “home”) set to Richard Wagner’s 1869 work, “Siegfried Idyll,” a symphonic tone poem for chamber orchestra composed as a birthday gift for his second wife after the birth of their son, Siegfried.

Marston (whose ballets based on “Jane Eyre” and “Of Mice and Men” have been performed by the Joffrey in past seasons), is an expert storyteller. And here she explores family dynamics, capturing the relationships between a loving husband and wife (ideally danced by Dylan Gutierrez and Christine Rocas), and their three adolescent children (Amanda Assucena, Xavier Nunez and Yumi Kanazawa).

The siblings have a solid connection with each other, but it is Assucena who notably exhibits a streak of rebellion against her father that injects this family portrait with some tension. The interplay of all five dancers is ideally captured by Marston and her cast.

Ochoa (whose riveting work about Eva Peron was performed by Ballet Hispanico this past March at the Auditorium Theatre), has an immense flair for all things theatrical, and it is on vivid display in “Platee,” the wonderfully zany, playfully campy final work on the program. 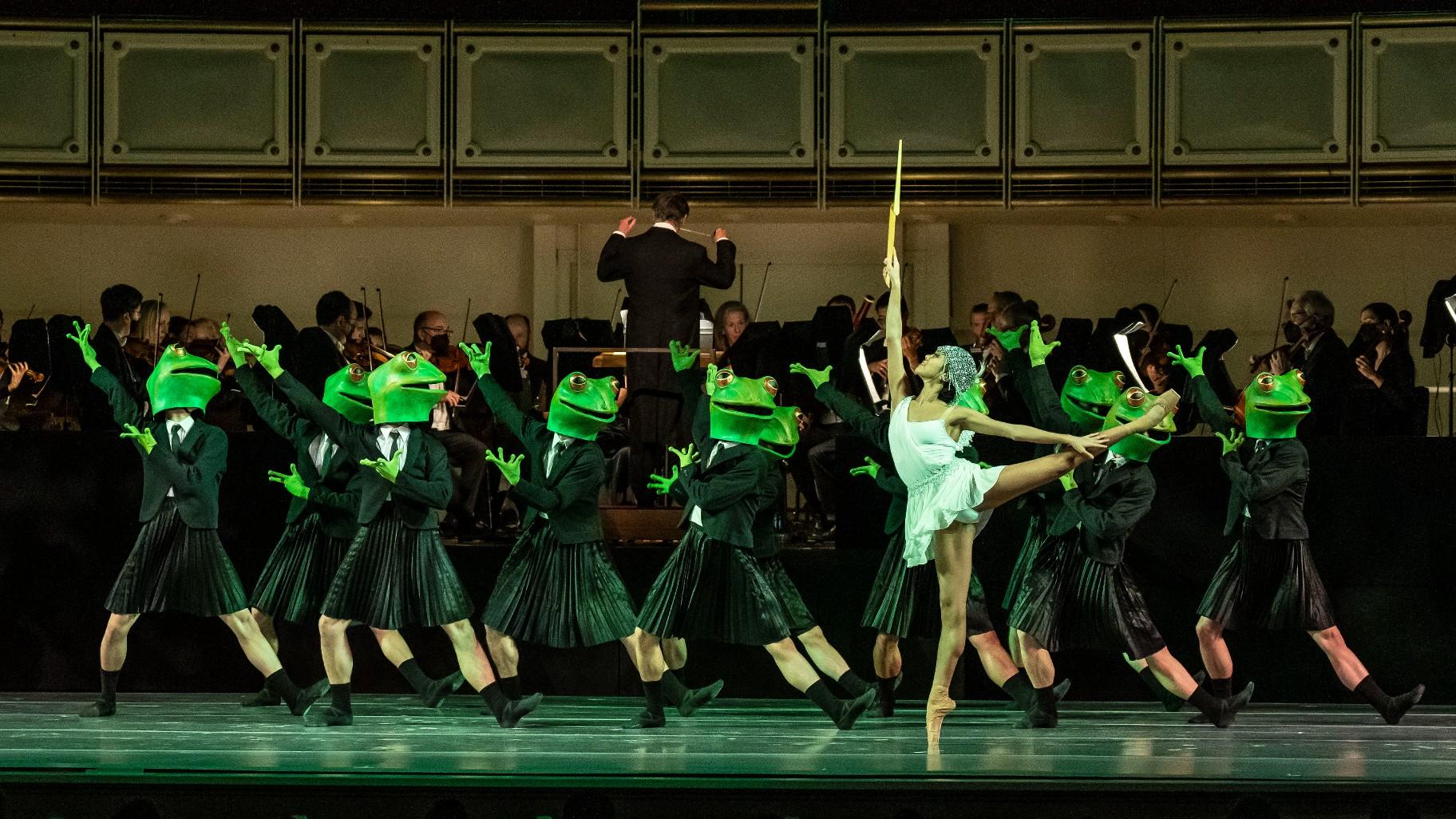 The Joffrey Ballet performs the world premiere of the newly-commissioned “Platée” with choreography by Annabelle Lopez Ochoa performed by the Chicago Symphony Orchestra with conductor Harry Bicket. (Credit: Todd Rosenberg)

Set to excerpts from Jean-Philippe Rameau’s score for his 1745 opera, it is based on the Greek myth about king of the gods Jupiter (danced here by the elegant Valentino Moneglia Zamora), and the homely nymph, Platee (performed with great comic flair by Fernando Duarte), who is determined to marry him. Surrounding them are Jupiter’s wife Juno (danced by Olivia Duryea) and Cupid (Jeraldine Mendoza), along with eight ideally graceful Wind Nymphs, and an irresistibly comic chorus of eleven male Frogs, who somehow manage to dance despite the fact that their heads are wholly encased in big green frog masks.

The orchestra (with superb work by the winds, strings, percussion and guest harpsichordist Mark Shuldiner) captured Rameau’s delightful score, from its stormy opening to its delightful minuets and comic hijinks.

This program, whose dance component was overseen by Ashley Wheater, the Joffrey’s ever-formidable artistic director, marks the second collaboration between the CSO and the Joffrey. The first, featuring works by Christopher Wheeldon and Stephanie Martinez, was in 2019.

And judging by the wonderfully enthusiastic response of the audience, the artistic interplay should become a regular feature of the CSO’s programming. “If music be the food of love” (thanks, Shakespeare), ballet is its ideal partner.