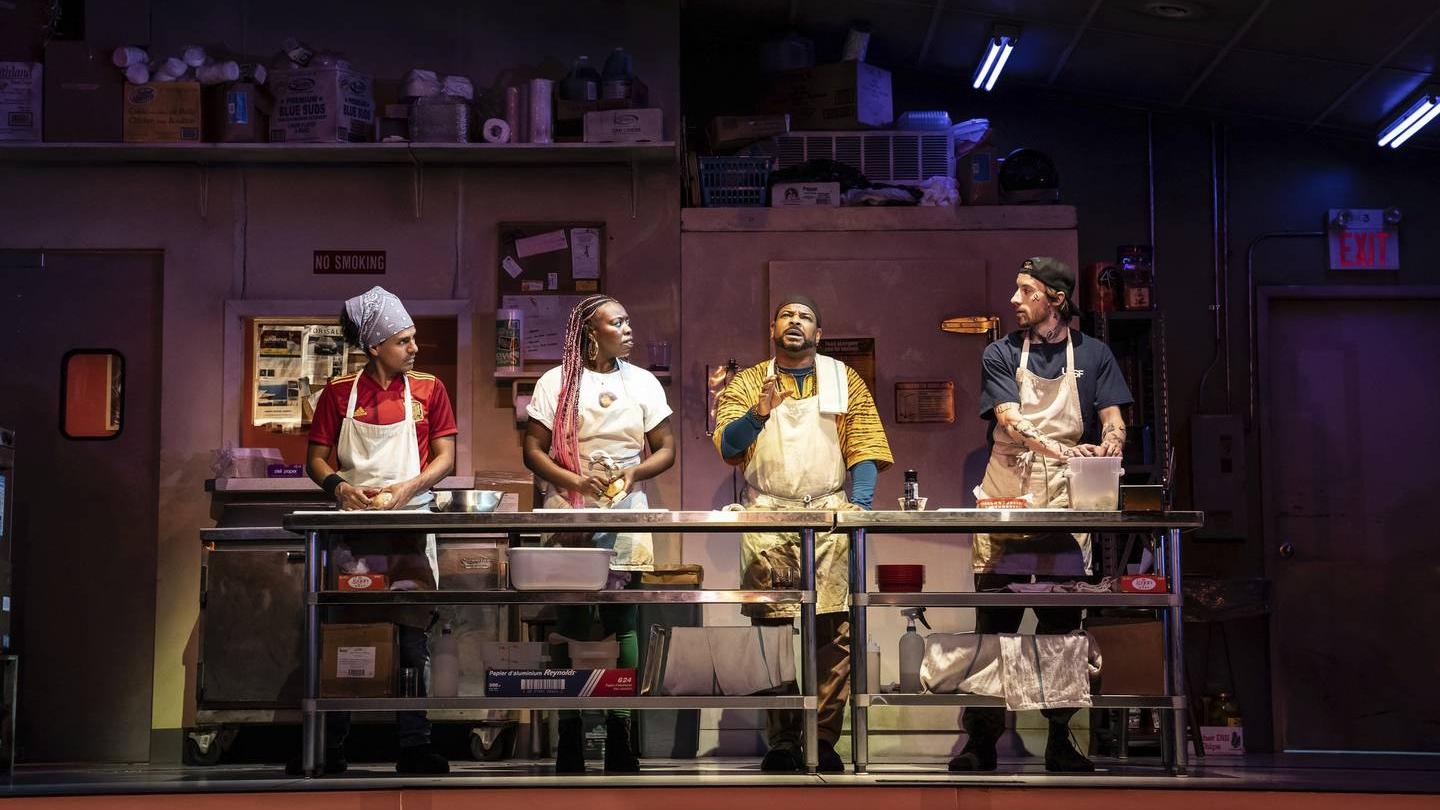 From left, Reza Salazar as Rafael, Nedra Snipes as Letitia, Kevin Kenerly as Montrellous and Garrett Young as Jason in “Clyde’s” at the Goodman Theatre. (Credit: Liz Lauren)

Lynn Nottage, the first woman to win two Pulitzer Prizes for Drama, is one of the truly stellar contemporary American playwrights. And her beautifully written, invariably deeply moving works are both full of engaging characters and widely varied in terms of time and place.

She has captured everything from the life of a lonely seamstress in a Manhattan boarding house in 1905 (“Intimate Apparel”), to the horrific treatment of women during the Civil War in the Democratic Republic of Congo in the late 1990s (“Ruined”), to the brutal murder of an elephant in Kenya by poachers determined to cash in on its magnificent ivory tusks (“Mlima’s Tale”).

Nottage’s most recent play, “Clyde’s — a nominee at last year’s Tony Awards that is now receiving a production at the Goodman Theatre — deals with a rarely explored but crucial issue. It’s the matter of the extreme difficulty faced by those who have been incarcerated and who, upon release, find it all but impossible to find a job.

As it happens, Clyde’s is the name of a truck-stop diner operated by a loud, angry, tempestuous and overtly sexual woman. A monstrous boss, she also bears the sandwich shop’s name. And though more than willing to hire those with criminal records, she also has no compunction about tormenting them and treating them with disdain. There also is the strong suggestion that she is involved with this business that might very well be a front for a financially corrupt outfit.

The play is set in the diner’s kitchen (Takeshi Kata’s set captures the environment ideally) where four of Clyde’s sandwich-makers — each with different backgrounds, personalities and prison records — gather and somehow manage to put up with Clyde’s relentless temper, obnoxious insults, threats and come-ons. (On opening night Clyde was played by understudy Danielle Davis, in place of De’Adre Aziza.) 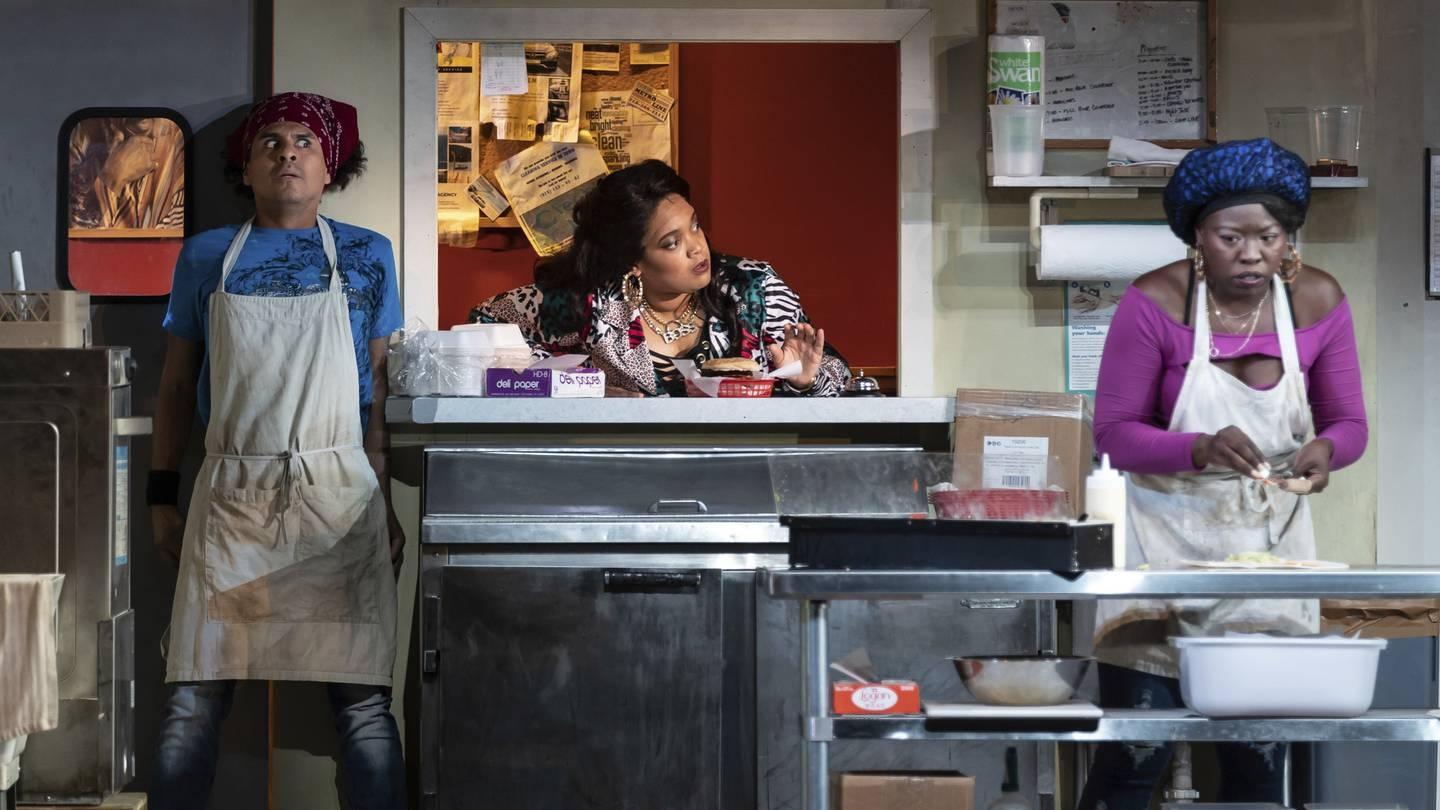 Reza Salazar as Rafael, Danielle Davis as Clyde and Nedra Snipes as Letitia in “Clyde’s” at the Goodman Theatre. (Credit: Liz Lauren)

The employees, who were imprisoned for a wide variety of crimes (and for one surprising reason not to be divulged here) include: Montrellous (Kevin Kenerly), the Black man with inner control and intelligence, who has a flair for concocting unusual sandwiches, as well as a passion for herbs; Rafael (Reza Salazar), the boyish Latino who tries desperately to romance Letitia (Nedri Snipes), a single mother with a slew of problems. And then there is the newest hire, Jason (Garrett Young), a heavily tattooed white guy who has been homeless since his release from prison, and has the disgusting habit of assembling sandwiches after wiping his nose with his hands and never bothering to wash them.

There are moments of both high comedy and sadness in this play that has been directed by Kate Whoriskey, Nottage’s frequent collaborator. But while there are some easily engaging scenes, and notably fine acting, Whoriskey’s overall direction is just far too relentlessly shrill. In addition, the audibility at many points in the production is spotty — a problem that also has marred other recent Goodman productions.

Without question, “Clyde’s” deals with a profoundly relevant subject, and one that suggests serious attention. But the overall tone of this production needs some serious re-tuning.