Preparing to redraw the boundaries of the city’s wards based on the 2020 census, Chicago politicians told voters they were ready for reform.

But while the map that appears to have at least 41 votes to pass the Chicago City Council has been the subject of more public scrutiny than any other revised map in Chicago’s history, it still allows incumbent alderpeople to pick their own voters and punish their enemies while boosting their allies.

That demand was a “slap in the face of Black folks,” Ald. Jason Ervin (28th Ward) told “Chicago Tonight” Tuesday.

The tentative ward map also creates a new 11th Ward with a majority of Asian American voters centered around Chinatown — the first in Chicago’s history. In addition, the 33rd Ward in the proposed compromise map would include Albany Park’s Asian American and immigrant community into one ward.

Both changes will “allow Asian American voters to have greater influence in local elections and will help elevate the unique issues that impact our community,” said Justin Sia, of Asian Americans Advancing Justice Chicago.

That change carves up the heart of the political empire that elected former Mayors Richard J. Daley and Richard M. Daley and ruled the city for decades.

“Do I think it is 100% perfect? It is not,” Ald. George Cardenas (12th Ward) said on “Chicago Tonight.” “It is something we can live with. It wasn’t going to be perfect for anyone.”

The compromise map will face its first test at 11:30 a.m. Friday, when the City Council’s Rules Committee holds a hearing on the proposal, which must be approved by the full City Council no later than May 19.

If that map is adopted, “the people of Chicago will have been completely and blatantly disrespected and dismissed by the very people who are supposed to represent them,” according to a statement issued by Change Illinois, which led a coalition of groups and drew its own ward map that failed to win a single supporter on the City Council. The group eventually endorsed the map backed by the Latino Caucus.

“For so many elected officials to turn their backs on the people and break their repeated promises in order to yet again serve their own self-interests is beyond disheartening,” according to the group’s statement.

At least three candidates who have announced they plan to challenge incumbent alderpeople in the February 2023 election found their homes moved from one ward to another. State law will allow them to run in whichever ward they choose during the 2023 election — but they would have to move if they win and choose to run for reelection in 2027.

Halle Quezada, who unsuccessfully challenged Ald. Debra Silverstein (50th Ward) in the 2020 race to be the ward’s Democratic committeeperson, would live in the 40th Ward under the tentative map, as would Mueze Bawany, a Chicago Public Schools teacher, who has announced a bid to unseat Silverstein.

The tentative map also moves lawyer Megan Mathias to the 30th Ward, even though Mathias has been running for months to unseat 45th Ward Ald. Jim Gardiner. Gardiner is under federal investigation, WTTW News has reported.

However, the tentative map could make it difficult for indicted Ald. Ed Burke (14th Ward) to win reelection by removing a vote-rich section of Garfield Ridge from the ward, while keeping the home of state Rep. Aaron Ortiz, the 14th Ward’s Democratic committeeperson in the ward.

Mayor Lori Lightfoot praised the tentative deal in a statement released by her office Tuesday.

“Not everyone got exactly what they wanted, but forging a compromise and avoiding a referendum is in everyone’s best interests,” Lightfoot said. “With this compromise, the City Council can now devote its full attention to the more immediate needs of our city like keeping our communities safe and driving our equitable economic recovery from the pandemic.”

While Change Illinois did not criticize the mayor by name, Lightfoot promised during her 2019 campaign for mayor that she would form an independent commission to draw a ward map based on the 2020 census.

Lightfoot told WTTW News in June 2019 that “aldermen should have a role, but what they’ve done before is go behind closed doors and carve up the spoils of the city. We’ve got to have a map that fairly represents neighborhood and community interests, and not just the interest of the local elected official.”

However, Lightfoot declined to endorse plans for an independent redistricting commission after she took office.

At the start of the racially polarizing and fraught remap effort in January 2021, Lightfoot told reporters the way the ward boundaries had been drawn for decades was “a relic of the past.”

“If you look at the ward boundaries, they don’t make any sense and they don’t respect neighborhood boundaries,” Lightfoot said.  “I think we can do better than what the current map looks like.”

The ward map that was drawn after the 2010 census was reviled by supporters of good government and reform advocates for drawing a 2nd Ward shaped like a lobster and for splitting Englewood into six wards as part of efforts to protect incumbent alderpeople.

Englewood remains split into six wards under the tentative map that could avert what would have been the first ward map referendum in 30 years.

Ald. Jeanette Taylor (20th Ward) told “Chicago Tonight” residents of Englewood will not be disenfranchised under the tentative map because all of the alderpeople “work together” as compared with previous years.

“It is what we could agree to,” Taylor said.

The tentative map based on the 2020 census is just as “highly gerrymandered,” according to a statement from the campaign that had been set to urge voters to support the map backed by the Latino Caucus.

The map’s boundaries make it clear which members of the City Council ended up out in the cold in the deal that relies on the support of the City Council’s most progressive members, including those who are members of the Chicago chapter of Democratic Socialists of America. The agreement was brokered in part by the leaders of the United Working Families political organization, which supports progressive policies and politicians.

One of the wards that would see significant changes is the 36th Ward, now represented by Ald. Gilbert Villegas. Under the tentative map, the ward would stretch from Schorsch Village on the Far Northwest Side along a narrow corridor that follows Grand Avenue to West Town.

On Twitter, the redrawn 36th Ward was likened to a pool noodle, a metal detector and a piece of rope being used in a tug-of-war contest.

Ervin said the remarkably changed 36th Ward was not “any type of payback” in response to Villegas’s efforts to reduce the number of wards with a majority of Black wards.

However, Ervin said the Latino Caucus should not have attempted to reduce the number of wards with a majority of Black voters from 18 wards to 14 wards.

“The damage that they were going to do African Americans not only in this city was a template that we’ve been fighting, the Jim Crow type of segregationist policies, for a number of years,” Ervin said. “To pack our community and give us 14 overall wards in this process was a slap in the face to Black folks.”

Villegas, the chair of the Latino Caucus and a candidate to represent the newly drawn 3rd District in the U.S. House of Representatives, said the tentative map represented a loss for Chicago’s Latino community.

Ald. Silvana Tabares, the vice chair of the Latino Caucus, would also see the boundaries of her 23rd Ward significantly changed and drawn into the shape of a backwards letter C in order to exclude Midway Airport, which would move to Ald. Marty Quinn’s 13th Ward. 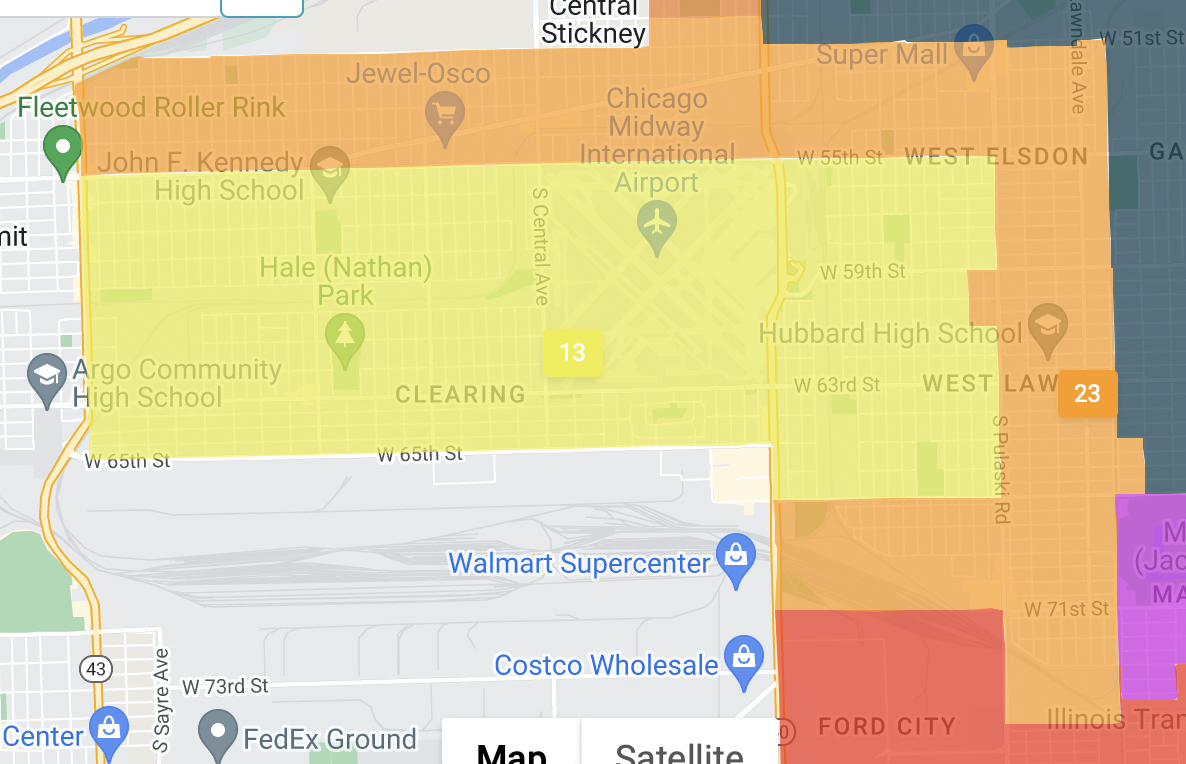 The 15th Ward, now represented by Ald. Raymond Lopez, who is running for mayor, has also been significantly redrawn into what Ugo Okere, who ran for 40th Ward alderperson in 2019, said looked like a “man punching the air cause he mad his ward map got massacred.”

Lopez endorsed the map crafted by the Latino Caucus, as did Ald. Brian Hopkins, who would see the Lincoln Yards megadevelopment moved from his North Side ward to Ald. Scott Waguespack’s 32nd Ward.

The tentative map would move the 34th Ward — now on the Far South Side, which saw a steep drop in population during the past decade — to the booming area south and west of the Loop. That newly created ward includes the home of Bill Conway, who ran unsuccessfully for State’s Attorney and told the Sun-Times he is considering a run for the City Council. 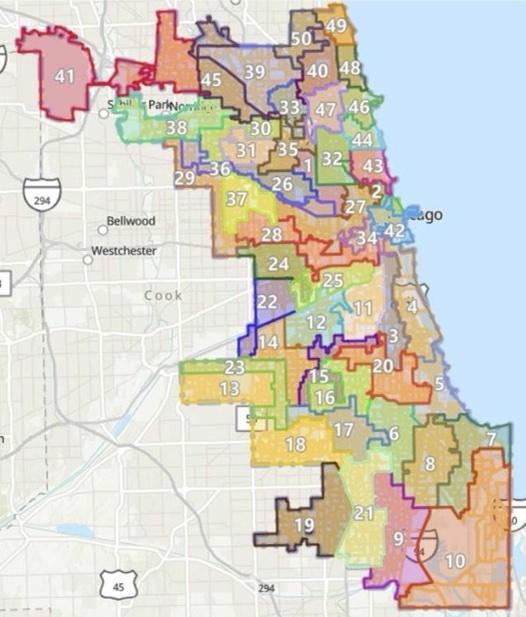