US Ramps Up Ukraine Warning, Says Russia May Invade in Days 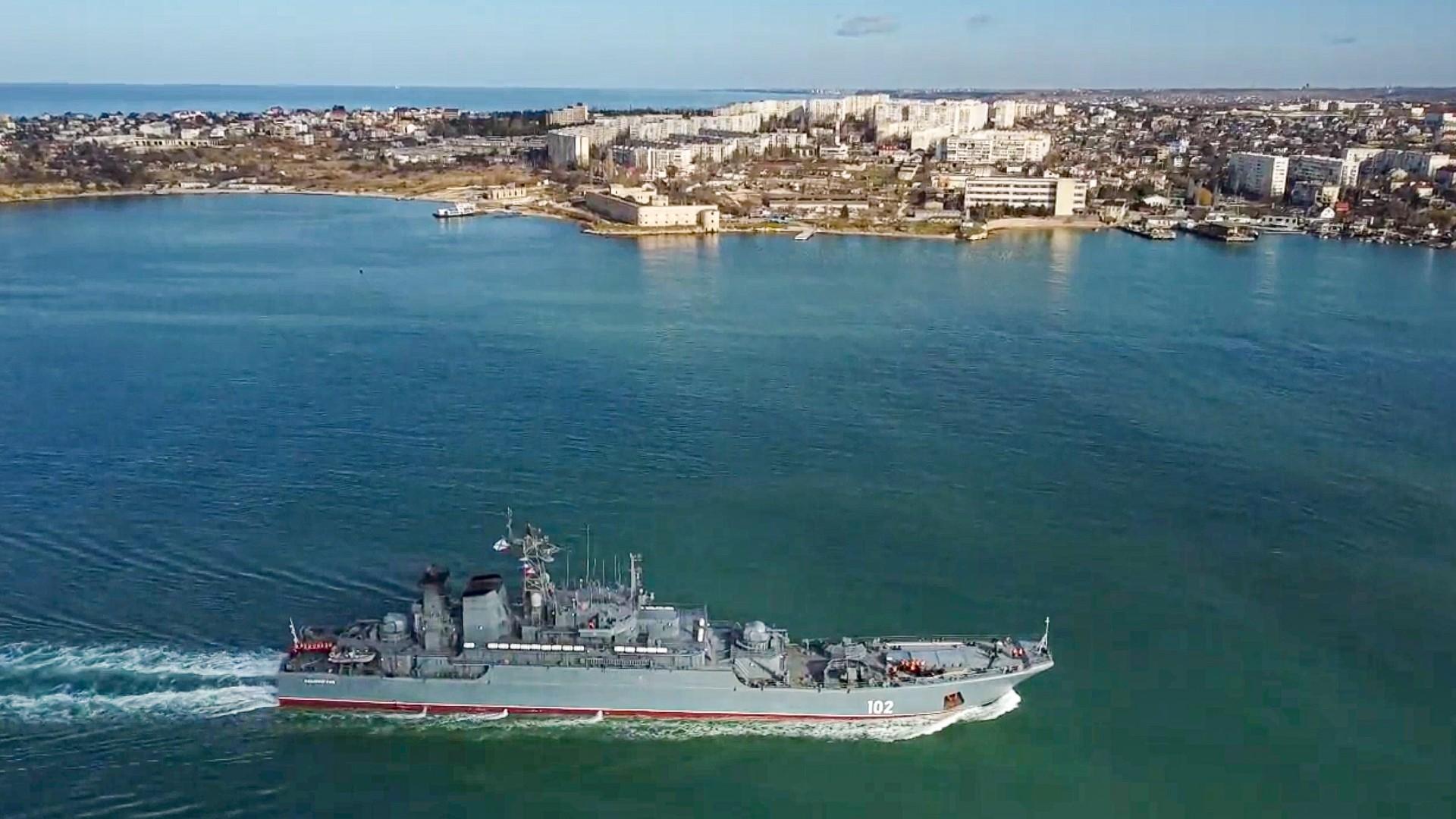 In this handout photo released by Russian Defense Ministry Press Service on Thursday, Feb. 10, 2022, the Russian navy's amphibious assault ship Kaliningrad sails into the Sevastopol harbor in Crimea. The Russian navy has sent six amphibious assault ships into the Black Sea as part of a buildup of forces near Ukraine that stoked Western fears of an invasion. (Russian Defense Ministry Press Service via AP)

WASHINGTON (AP) — The Biden administration on Friday escalated its dire warnings about a possible Russian invasion of Ukraine, saying it could take place within days, even as diplomatic efforts to resolve the crisis continued.

The White House said it still didn’t know if Russian President Vladimir Putin had made a decision to invade, but it said Putin has assembled all the elements to do so quickly and told Americans in Ukraine to leave within the next 48 hours.

The stark warning accelerated the projected timeframe for a potential invasion, which many analysts believed was unlikely to start until after the Winter Olympics in China end on Feb. 20. The heightened U.S. rhetoric followed new intelligence that showed another increase in Russian troops near the Ukrainian border and the start of a major Russian military exercise in neighboring Belarus.

“We continue to see signs of Russian escalation, including new forces arriving at the Ukrainian border,” he added, ramping up the urgency of earlier U.S. warnings. “As we’ve said before, we are in the window when an invasion could begin at any time should Vladimir Putin decide to order it.”

Secretary of State Antony Blinken, who is currently in Australia, was the first senior U.S. official to say publicly that an invasion could come before the end of the Olympics.

Repeating Blinken’s earlier caution to U.S. citizens in Ukraine, Sullivan said: “The risk is high enough and the threat is now immediate enough that prudence demands that it is the time to leave now.”

Sullivan would not discuss the details of the intelligence behind the new U.S. assessment and denied a report that American officials believe Putin has made the decision to invade. But he said the situation is increasingly fragile and that the U.S. and its allies must be prepared.

“We believe he very well may give the final ‘go order’,” Sullivan said. “That is a very distinct possibility. It may well happen soon.”

Biden spoke to a number of European leaders on Friday to underscore the concerns raised by U.S. intelligence about the potential imminence of a Russian invasion. Sullivan said the Western leaders were completely united and would respond harshly to a Russian invasion with devastating economic and trade sanctions.

Britain’s defense secretary, meanwhile, was visiting Moscow in another effort to ease tensions over a possible invasion. Ben Wallace’s trip came a day after British Foreign Secretary Liz Truss held frosty negotiations in Moscow to urge Russia to pull back over 100,000 troops near Ukraine.

Russian Foreign Minister Sergey Lavrov characterized that meeting in blunt and scathing terms, calling it a “conversation between deaf and dumb.”

Russia opened massive war games in Belarus on Thursday that are due to run through next weekend but says it has no plans to invade Ukraine. It wants the West to keep Ukraine and other former Soviet countries out of NATO. It also wants NATO to refrain from deploying weapons there and to roll back alliance forces from Eastern Europe — demands flatly rejected by the West.

Speaking at the start of his talks with Wallace, Russian Defense Minister Sergei Shoigu noted that “the military-political situation in Europe is growing increasingly tense, and it’s not our fault.”

Shoigu noted that shipments of weapons to Ukraine by the U.S., Britain and other allies have contributed to the tensions and pointed to the recent deployment of British soldiers to Ukraine, asking why they were sent and how long they will stay.

Speaking to reporters after the talks, Wallace noted that the anti-tank missiles that Britain sent to Ukraine were defensive tactical weapons that do not pose a threat to any neighbor unless it invades.

He said British troops deployed to Ukraine to help train its military to use the British weapons and will leave “pretty soon” after they accomplish that mission.

Wallace described the talks as “constructive and frank” and noted his Russian counterpart’s assurances that Moscow has no intention to attack Ukraine. But he also emphasized that the concentration of Russian troops near Ukrainian territory is clearly “beyond normal exercising,” explaining that about half of Russia’s land forces are concentrated around the border with Ukraine.

He reaffirmed that a Russian invasion would have “tragic consequences” and emphasized the need to maintain contacts between military forces to prevent incidents.

“What is incredibly important, especially at this time with over 100,000 troops at high readiness on the borders of another country, is that we do not get into a position of miscalculation or escalation,” Wallace said. He stressed that only through “the ability to talk to each other at times of concern can we pave the way for any de-escalation measures.”

Speaking earlier Friday in Australia, Blinken did not detail the reasons behind the latest State Department’s security alert urging all American citizens to leave Ukraine.

“We’re in a window when an invasion could begin at any time and, to be clear, that includes during the Olympics,” Blinken added.

Yet, Ukrainian Foreign Minister Dmytro Kuleba again played down the U.S. advice to Americans to leave, saying that Washington has made similar calls before. He noted that the situation remains volatile.

Continuing its military buildup near Ukraine, Russia has moved six amphibious assault vessels into the Black Sea, augmenting its capability to land marines on the coast.

Moscow has announced sweeping drills in the Black and Azov seas in the coming days and closed large areas for commercial shipping, drawing a strong protest from Ukraine on Thursday.

Kuleba voiced hope that the West would react to the Russian move, saying that “we have engaged our partners to prepare a coordinated response.”

Russia’s troop concentration includes forces deployed on the territory of its ally Belarus for massive joint drills involving firing live ammunition. Those exercises entered a decisive phase Thursday and will run through Feb. 20. The Ukrainian capital is about 75 kilometers (47 miles) south of the Belarus border.

NATO has stepped up military deployments to bolster its eastern flank, with the U.S. sending troops to Poland and Romania.

The U.S. Navy said Thursday that it has deployed four destroyers from the United States to European waters. The Navy did not directly tie this deployment to the Ukraine crisis but said the ships provide “additional flexibility” to the U.S. Sixth Fleet commander, whose area of responsibility includes the Mediterranean, and will operate in support of NATO allies.

NATO Secretary-General Jens Stoltenberg visited a military base in Romania, hailing the ongoing deployment of 1,000 additional U.S. troops that will nearly double their current number there. “This is a powerful demonstration of trans-Atlantic unity,” Stoltenberg said.

Russian Foreign Ministry spokeswoman Maria Zakharova responded by noting that “NATO keeps building up its presence near Russia’s borders and exacerbates the situation around Ukraine to create a pretext for that.”

Russia and Ukraine have been locked in a bitter conflict since 2014, when Ukraine’s Kremlin-friendly leader was driven from office by a popular uprising. Moscow responded by annexing Crimea and then backing a separatist insurgency in eastern Ukraine, where fighting has killed over 14,000 people.

A 2015 peace deal brokered by France and Germany helped halt large-scale battles, but regular skirmishes have continued, and efforts to reach a political settlement have stalled.