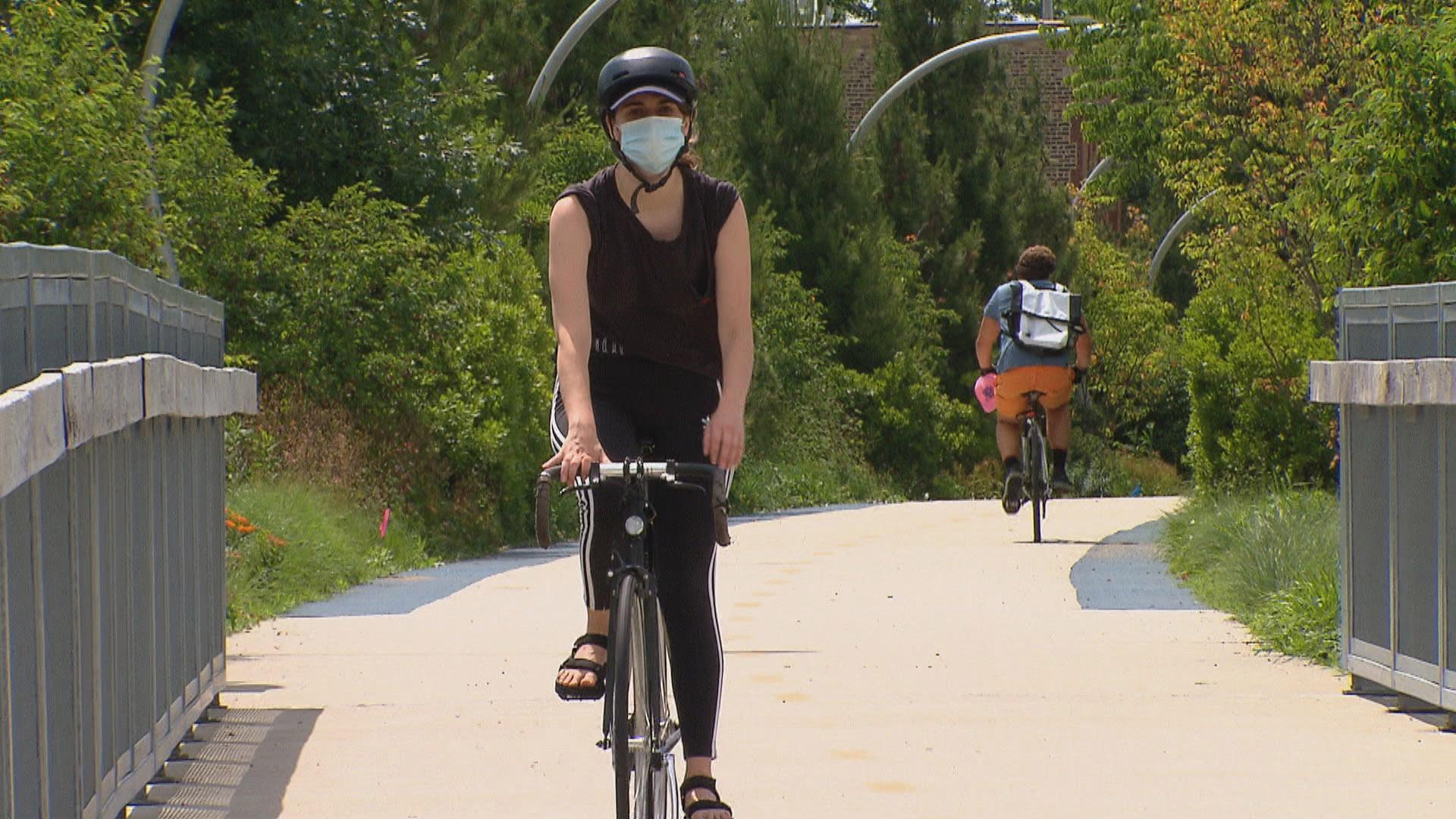 A cyclist wearing a mask rides along the 606 trail in Chicago. (WTTW News)

Firms that want to make electric scooters a permanent part of the city’s transportation system can now apply to win one of three permits green-lighted by the Chicago City Council in October — but the two-wheelers will be banned from the 606 Trail.

During the debate over the scooter sharing project, which will operate in a similar manner to the Divvy bicycle-sharing system, members of the City Council were told the scooters would only be banned from the Lakefront Trail, not the 606 Trail, which is often clogged with bicycles, runners and walkers.

However, rules released Wednesday by the Chicago Department of Transportation informed firms that plan to apply for the permits that e-scooters will also be banned from both popular trails as well as the Riverwalk and O’Hare Airport.

E-scooters will be banned from both the Lakefront and 606 trails by Chicago Park District rules, a city spokesperson said.

Scooters will be banned from the 606 Trail because of congestion, said Michele Lemons, a spokesperson for the Chicago Park District.

City leaders and park district officials will "evaluate both areas to determine whether it’s possible to expand the program to the 606 and lakefront trail in a manner that is safe and enjoyable for all visitors," Lemons said Friday.

Three firms will win two-year licenses from the city to deploy a maximum of 3,000 scooters on Chicago’s streets this spring. Each firm would be allowed no more than 1,000 scooters, according to the rules.

Originally, Chicago City Council members were told 6,000 scooters would hit city streets in the first phase of the program, with each firm limited to 2,000 scooters.

“Companies will be allowed to deploy additional devices if they meet specific ridership, safety, compliance and education requirements,” according to a statement from the departments of Transportation and Business Affairs and Consumer Protection.

The program could expand to 12,500 scooters with the support of Chicago Department of Transportation Commissioner Gia Biagi’s support.

The deadline for firms to apply is Feb. 18, officials said.

Two pilot programs in 2019 and 2020 banned e-scooters from the Central Business District as well as the Lakefront Trail and the 606 Trail.

A “limited number of scooters will be allowed downtown,” according to the rules. Both downtown Alds. Brendan Reilly (42nd Ward) and Brian Hopkins (2nd Ward) said they were concerned about the scooters impact on pedestrians in their wards.

City officials are hopeful that the two-wheeled vehicles will reduce congestion and encourage the use of public transportation throughout Chicago. But opponents of the program say the scooters, often discarded haphazardly by riders and wheeled down crowded sidewalks, proved to be a nuisance in their wards.

The city stands to earn $4.4 million from the permit fees for the 6,000 scooters in the program’s first phase. Riders who rent the two-wheeled scooters would also pay the city a 9% lease tax, officials said.

To prevent the two-wheeled vehicles from becoming nuisances for pedestrians, each scooter must be equipped with a system that sounds an alarm when it is ridden on Chicago’s sidewalks, according to the rules. The alert would be similar to the one made by cars when a drivers’ seat belt is not engaged, to alert both the rider and nearby pedestrians that the scooter is being operated in the wrong place, officials said.