An apartment complex with 297 units — including 59 set aside for low- and moderate-income Chicagoans — will be built in one of Chicago’s wealthiest neighborhoods after the Chicago City Council voted Wednesday to defy the wishes of the area’s alderperson.

The proposal from Glenstar at 8535 W. Higgins Road will build the 41st Ward’s first affordable housing in decades amid a cluster of hotels and office mid-rises along the Kennedy Expressway near O’Hare Airport and steps away from the CTA Blue Line.

The 33-13 vote by the Chicago City Council represents a nearly unprecedented rebuke of the decades-old tradition of giving alderpeople the final say over housing developments in their wards. Critics of that practice, which is the subject of a federal probe, contend it has created a hyper-segregated city rife with racism and gentrification.

Mayor Lori Lightfoot echoed that judgment moments before the vote, which capped a more than three-year odyssey that became a major flashpoint in the high-stakes effort to combat systemic racism in Chicago.

“Housing is at the heart of segregation in this city,” Lightfoot said.

“This is a necessary project that must move forward,” Lightfoot said.

The City Council approval of the project, which comes after it did not even advance to the full City Council for a vote in 2018, comes amid a probe by the U.S. Department of Housing and Urban Development. Federal officials are investigating a civil rights complaint filed in November 2018 by housing advocates that alleges that the use of aldermanic prerogative to block affordable housing has fueled deep economic and racial divides in Chicago.

Ald. Anthony Napolitano (41st Ward) pleaded with his colleagues to uphold aldermanic prerogative and defer to him and the opinions of homeowners in Edison Park and Norwood Park on Chicago’s Far Northwest Side, where more than 80% of residents are white.

“Just remember this. When it goes around to your ward ... and you vote no and everyone else votes yes because they have been told to ... just remember this,” Napolitano said. “There is now a precedent for this. Tomorrow it is your ward. Think long and hard about [that].”

Lightfoot did not dispute that Wednesday’s vote could have significant repercussions.

“If the precedent that it sets is there must be affordable housing in every area of our city, I’m all for that,” Lightfoot said. “We have to break the grip of segregation. And this is one way that we do it. We put affordable units everywhere.”

Napolitano presented a litany of concerns about the proposal and said the Higgins corridor, on the border between Chicago and Park Ridge, should remain focused on attracting businesses rather than residents.

In addition, Napolitano — the only member of the Chicago City Council who is not a member of the Democratic Party — has blasted the complex as too dense for the Far Northwest Side, adding that it would cause overcrowding at a nearby school that was recently expanded, snarl traffic and hurt struggling “mom and pop landlords.”

However, Department of Housing Commissioner Marisa Novara urged members of the committee to support the development, saying that the city was grappling with a massive shortfall of affordable housing and every neighborhood had an obligation to help meet that need.

Representatives of Glenstar told alderpeople that the demand for office space has cratered amid the continuing COVID-19 pandemic and the rise of remote work.

More than two years after Lightfoot took office, progress on her central campaign promise to root out aldermanic prerogative has advanced only in fits and starts, pushed to the back burner by one crisis after another and the COVID-19 pandemic.

Lightfoot has made no attempt to propose citywide changes to the city’s zoning code, where the heart of aldermanic power lies. 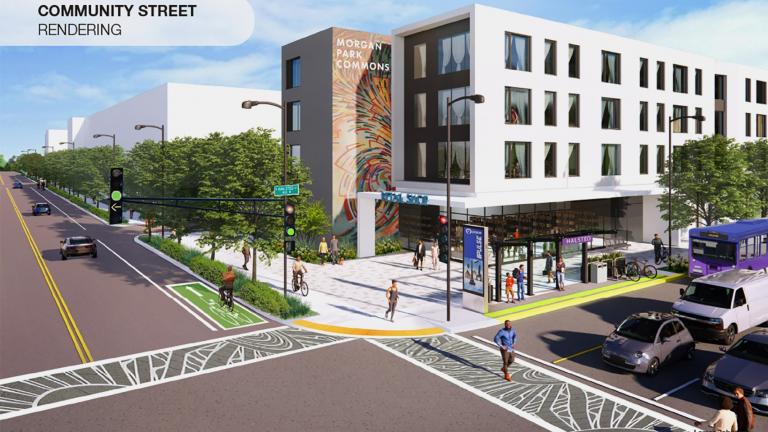