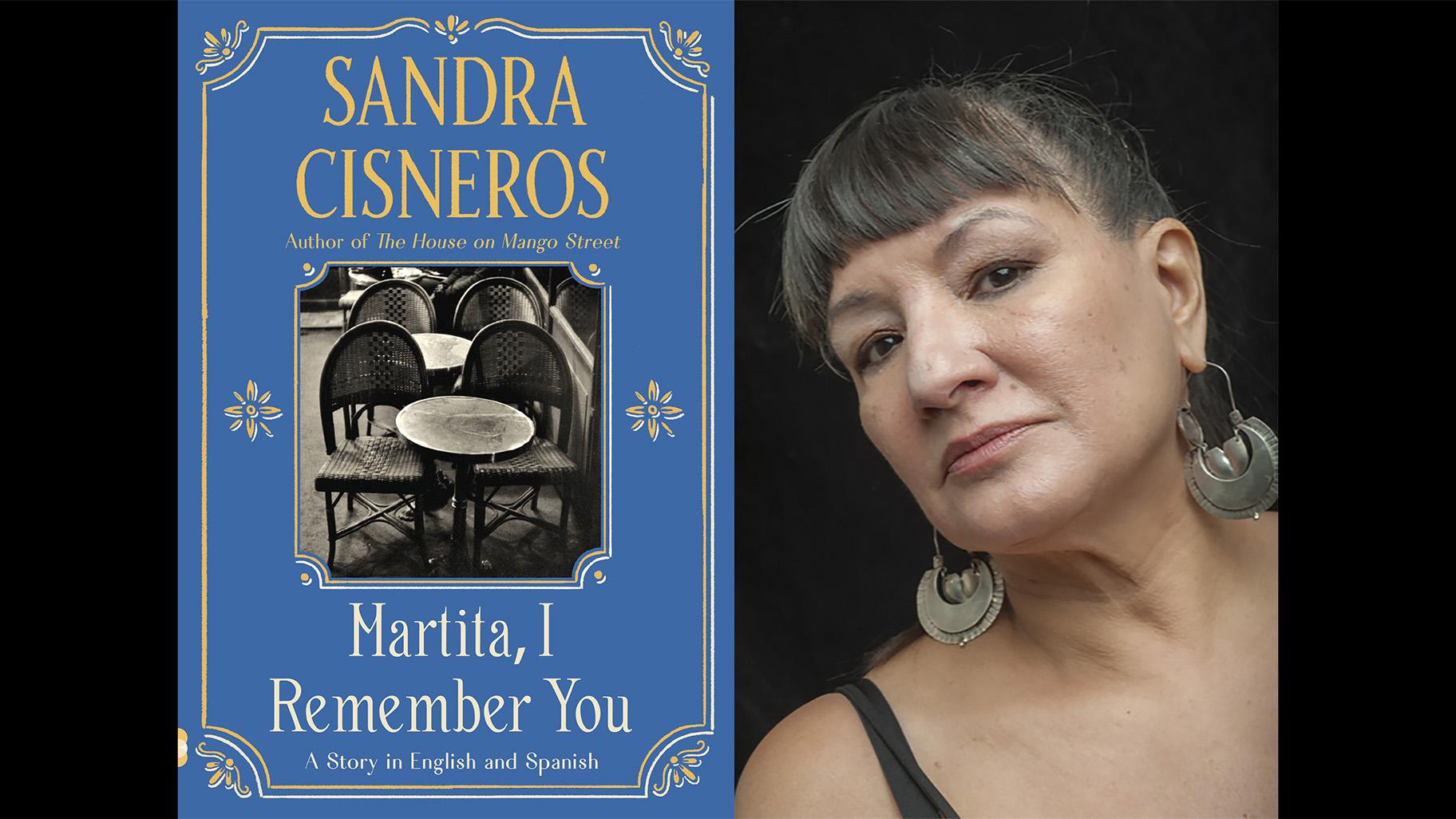 This combination of images released by Vintage Books shows cover art for "Martita, I Remember You," left, and a portrait of author Sandra Cisneros. (Vintage Books via AP, left, and Keith Dannemiller via AP)

The author of the best-selling “The House on Mango Street” is back with her first work of fiction in almost a decade, a story of memory and friendship, but also about the experiences young women endure as immigrants worldwide.

Inspired by Cisneros’ own time in Paris as a young, aspiring writer, “Martita” follows Corina, a woman in her 20s who has left her Mexican family in Chicago to pursue literary dreams in the city where Ernest Hemingway, James Baldwin and many others lived. During her brief time there, she finds herself struggling with money, befriending panhandling artists and sleeping on crowded floors with other immigrants.

Supporting her through it all are Martita and Paola, an Argentine and an Italian as broke as she was.

Over the years, the three disperse to different continents, eventually falling out of touch, until Corina finds a series of old letters in a drawer that bring back intense memories of those days together.

“It began from a place in my own memory, with the real Martita that inspired this story — real Martitas, I should say, because we meet so many in our lives, women that come and befriend us and have nothing. It’s always the people that have nothing that give the most,” Cisneros said in a recent interview with The Associated Press via Zoom from San Miguel de Allende, Mexico.

“So, what began as a real story about things that happened to me ‘se infló’ (inflated) — it went to other places,” she continued.

“Martita, I Remember You” (Vintage Original) was published last week as a dual-language paperback featuring Cisneros’ English story on the front and, when flipped over, Liliana Valenzuela’s Spanish translation, “Martita, te recuerdo.”

Born in Chicago to Mexican parents, Cisneros is one of the most prominent Latino authors in the United States, with honors including the 1985 National Book Award for “The House on Mango Street”, the PEN/Nabokov Award for International Literature and the 2015 National Medal of Arts.

Cisneros started writing the story about Martita in the late ‘80s, early ‘90s, with the idea of including it in her award-winning collection “Woman Hollering Creek.” But she only had the first part of the story written, and her editor felt there was more to it.

In the last couple of years, she pulled it out again and added a middle and an end.

“I guess they needed me to be older to be able to write that part,” Cisneros said with a laugh. “I don’t know how old I was, my 30s? Yeah. I couldn’t write the ending because I was too young! Even though Corina is about 36... I am not as wise as Corina. The author needed to be older to get the long view, to see it.”

The book takes us back to a time before emails and cellphones, when people would exchange physical addresses to stay in touch. There was the elation of getting letters from afar; Corina reads and re-reads the ones she got.

“Actually, the first letter is based on a real letter that came to me after I had left. Years had passed... and a real letter came that triggered a feeling that I didn’t have a name for,” said Cisneros.

“This whole story is my letter that I never mailed back to her, or to all of the Martitas that befriended me when I was floating around in the world. I felt like I had to write this unsent letter to understand what it was that I experienced in these very random, short (relationships with) people that I met when I was traveling.”

Although she set her book in France in the 1980s, Cisneros, whose works have always had immigration as a theme, hopes people relate to the story today.

“It’s still very relevant now to every country, and especially the United States,” she said, adding that she’s “ashamed to be living in this time and to know that I’m a citizen of a country that separates children from their parents and who are treating refugees worse that animals. So I hope that this book will help to awaken people, make change.

“I absolutely believe that art can make change, because it’s made such a big change in my life.”

Cisneros recalls “the generosity of strangers” when she lived abroad, and said it helped her “understand what it is like for immigrants now, coming to the United States, being vilified, being looked down upon the way that Parisians, you know, looked down at us.... I understood my father and I understood the immigrants’ situation now in a way that maybe I couldn’t, so I’m glad I lived that experience.”

If she could hear back from Martita, what would she tell her?

“Oh! I would be so happy! I would say: ‘Martita, where are you? I’m coming! What happened to you?’ I would love to see Martita again. I forgot her last name, I don’t know where she is, but she is the one that triggered these stories from many women that are connected,” Cisneros said.

She is currently finishing a book of poetry that will come out next fall in English and Spanish: “Woman without Shame”/ “Mujer sin vergüenza.” She is also working on the libretto of an opera adaptation of “The House on Mango Street” with New York composer Derek Bermel, as well as on a pilot for a TV series based on that book.