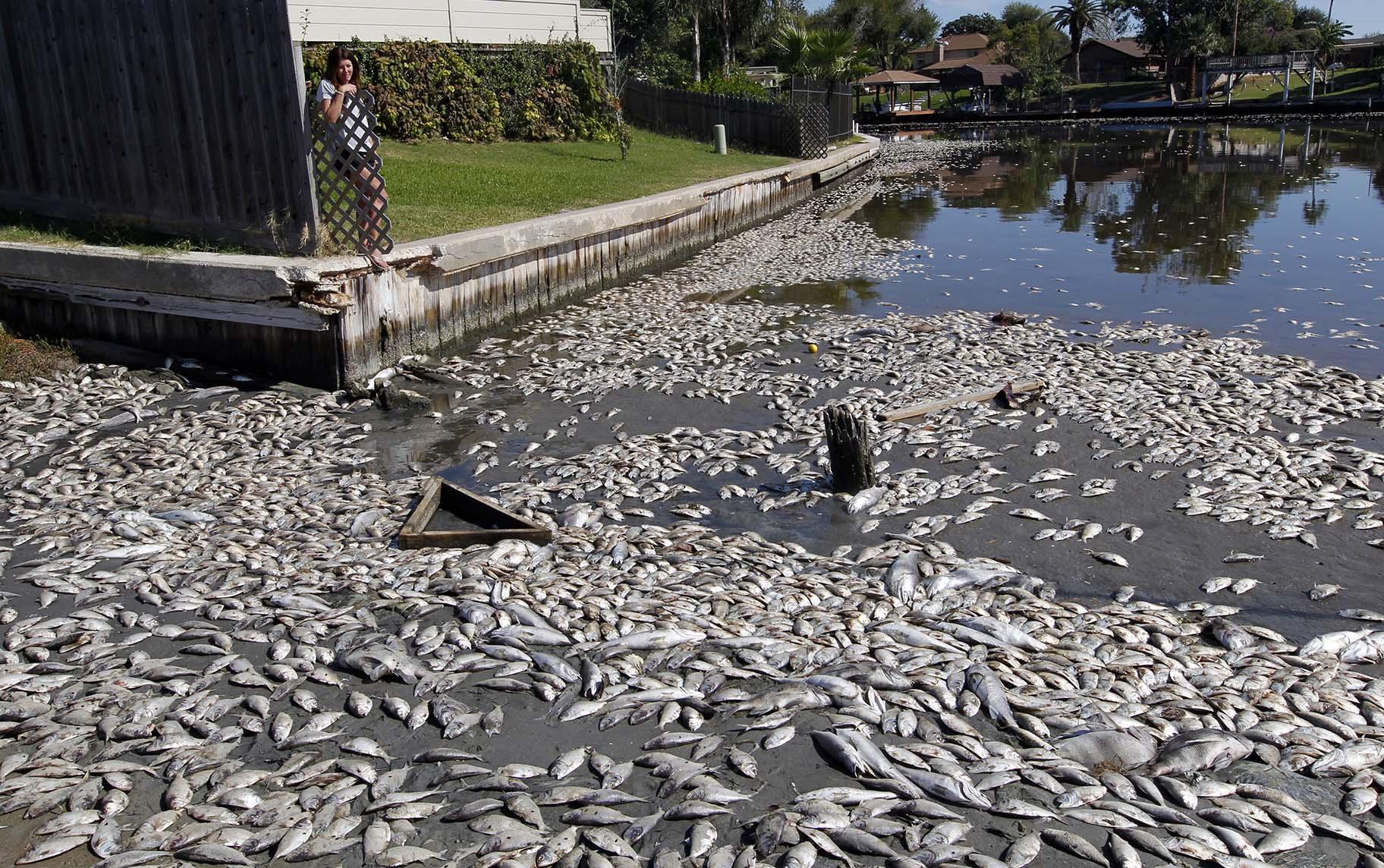 In this Tuesday, Oct. 30, 2012, file photo, Kim Bertini looks over some of the 15,000 dead fish that washed up near her backyard on Lake Madeline in Galveston, Texas. (Jennifer Reynolds / The Galveston County Daily News via AP, File)

Oxygen levels have dropped in hundreds of lakes in the United States and Europe over the last four decades, a new study found.

Researchers examined the temperature and dissolved oxygen — the amount of oxygen in the water — in nearly 400 lakes and found that declines were widespread. Their study, published Wednesday in the journal Nature, found dissolved oxygen fell 5.5% in surface waters of these lakes and 18.6% in deep waters.

The authors said their findings suggest that warming temperatures and decreased water clarity from human activity are causing the oxygen decline.

“Oxygen is one of the best indicators of ecosystem health, and changes in this study reflect a pronounced human footprint,” said co-author Craig E. Williamson, a biology professor at Miami University in Ohio.

Dissolved oxygen losses in Earth’s water systems have been reported before. A 2017 study of oxygen levels in the world’s oceans showed a 2% decline since 1960. But less was known about lakes, which lost two to nine times as much oxygen as oceans, the new study’s authors said.

Prior to this study, other researchers had reported on oxygen declines in individual lakes over a long period of time. But none of have looked at as many lakes around the world, said Samuel B. Fey, a Reed College biology professor who studies lakes and was not involved in this study.

“I think one of the really interesting findings here is that the authors were able to show that there’s this pretty pronounced decline in dissolved oxygen concentrations in both the surface and (deep) parts of the lake,” Fey said.

The deep water drop in oxygen levels is critical for aquatic organisms that are more sensitive to temperature increases, such as cold water fish. During summer months, they depend on cooler temperatures found deeper in the water, but if deep waters are low on oxygen, these organisms can’t survive.

“Those are the conditions that sometimes lead to fish kills in water bodies,” said study co-author Kevin C. Rose, a professor of biology at Rensselaer Polytechnic Institute. “It really means that a lot of habitats for cold water fish could become inhospitable.”

Other organisms, Rose said, are more tolerant of warmer temperatures found at the surface level and can get enough oxygen by remaining near the surface, where water meets air.

About a quarter of the lakes examined actually showed increasing oxygen in surface waters, which Rose says is a bad sign because it’s likely attributable to increased algal blooms — sudden growth of blue green algae.

In these lakes, he said, dissolved oxygen was “very low” in deep waters and was unlivable for many species.

And the sediment in such oxygen-starved lakes tends to give off methane, a potent greenhouse gas, research shows.

Lakes examined in the new study were in the U.S. or Europe, except for one in Japan and a few in New Zealand. The authors said there was insufficient data to include other parts of the world.

Rose said lakes outside the study area probably are experiencing drops in dissolved oxygen, too. The reason, he said, is that warmer temperatures from climate change reduce the ability of oxygen to dissolve in water — its solubility.

“We know that most or many places around the planet are warming,” he said. “And so we would expect to see declining solubility.”