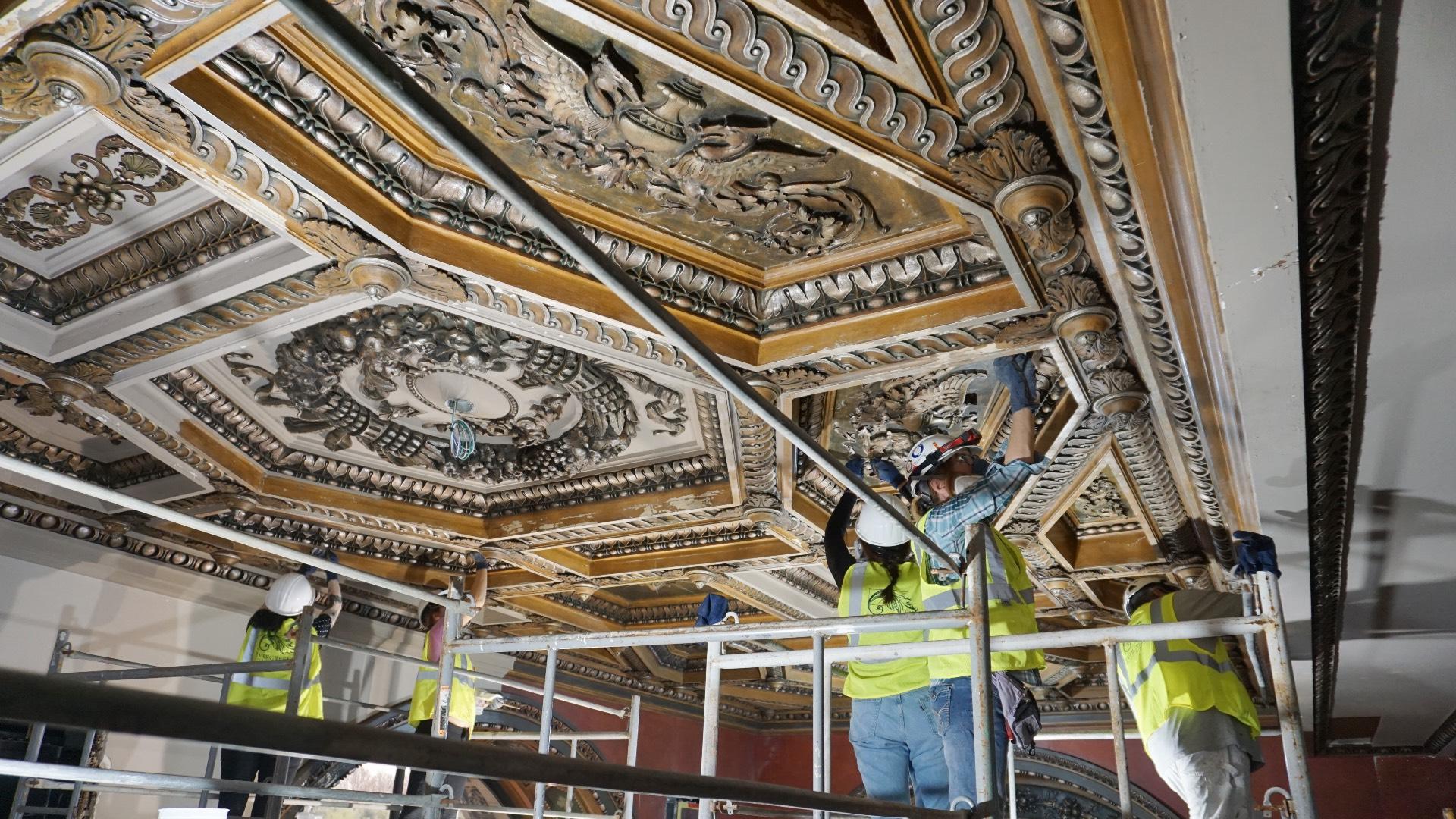 A team at work on restoring historic rooms in the Chicago Cultural Center to their original glory. (Courtesy of Harboe Architects)

An archeological dig of sorts is taking place at the Chicago Cultural Center, where a $15 million restoration project is underway to unearth the original beauty of the building’s Grand Army of the Republic Memorial Hall and Rotunda.

On Thursday, the Department of Cultural Affairs and Special Events announced that work had begun in February on the rooms’ interiors, which were designed by Louis Comfort Tiffany in the 1890s. The rooms were created as a gathering place for Civil War veterans and their families, and as a memorial to the war’s dead. Subsequent renovations have obscured many of Tiffany’s colorful decorative flourishes.

The big reveal is still nearly a year away, but the city has shared teaser images of the work in progress. The sneak peek shows the meticulous separation of layers of paint to expose original plaster surfaces, which had been finished in silver leaf and shaded with translucent color. Crews are also dismantling the G.A.R.’s stunning 62,000-piece Tiffany dome. The glass will undergo restoration offsite and will be reinstalled. (The G.A.R. dome is one of two Tiffany designs in the Cultural Center. Restoration of the first, in the center’s Preston Bradley Hall, was completed in 2008.)

“This project reminds me of hunting for buried treasure. Instead of being buried under the ground, it’s a treasure of Tiffany coloration buried beneath layers of paint — and just waiting to be revealed in all its 1890s glory,” said Tim Samuelson, cultural historian emeritus for the city of Chicago. “This is no ordinary preservation project. It’s an undertaking beyond belief, assembling the absolute top talents in historic restoration to revive one of the great lost treasures of decorative arts.” 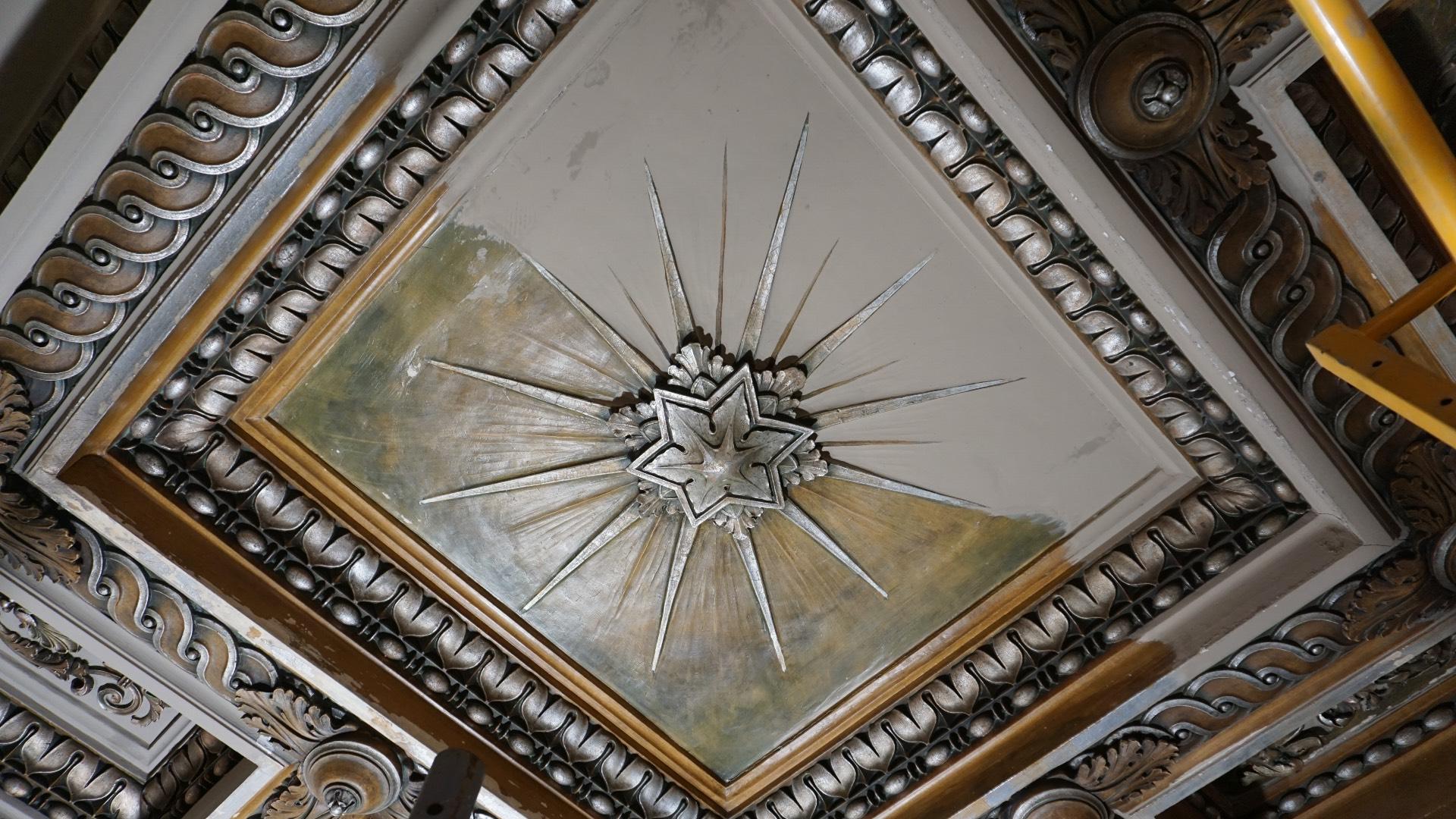 A restoration team is meticulously removing layers of paint to reveal the colorful detail underneath. (Courtesy of Harboe Architects)

Chicago-based Harboe Architects was tapped to oversee the project, and has assembled the same team that recently completed restoration of Frank Lloyd Wright’s Unity Temple in Oak Park. The Landmarks Commission reviewed and unanimously approved the project and will provide additional oversight, DCASE said in a statement.

Other aspects of the G.A.R. restoration include recreating long-lost light fixtures using early photographs and architectural drawings for reference. All marble will be cleaned and returned to its original polish, and the rooms’ mahogany doors will also be given a glow-up. Dark-tinted exterior window glass installed during the 1970s will be replaced with protective filtered clear glass, allowing the room to be seen from streets and sidewalks, as well as from Millennium Park, according to DCASE.

The restoration, funded by an unnamed donor, is expected to be completed in early 2022. Though the rooms are being returned to their historic appearance, the project also incorporates modern electrical and Wi-Fi upgrades.

The G.A.R. rooms will remain closed to the public while work is ongoing, but the rest of the Cultural Center is set to reopen June 2, with new exhibits and amenities.

Below, more photos of the work-in-progress from DCASE:

The Grand Army of the Republic Memorial Hall and Rotunda were created as a gathering place for Union Civil War veterans and to honor the war's dead. (Courtesy of Department of Cultural Affairs and Special Events) 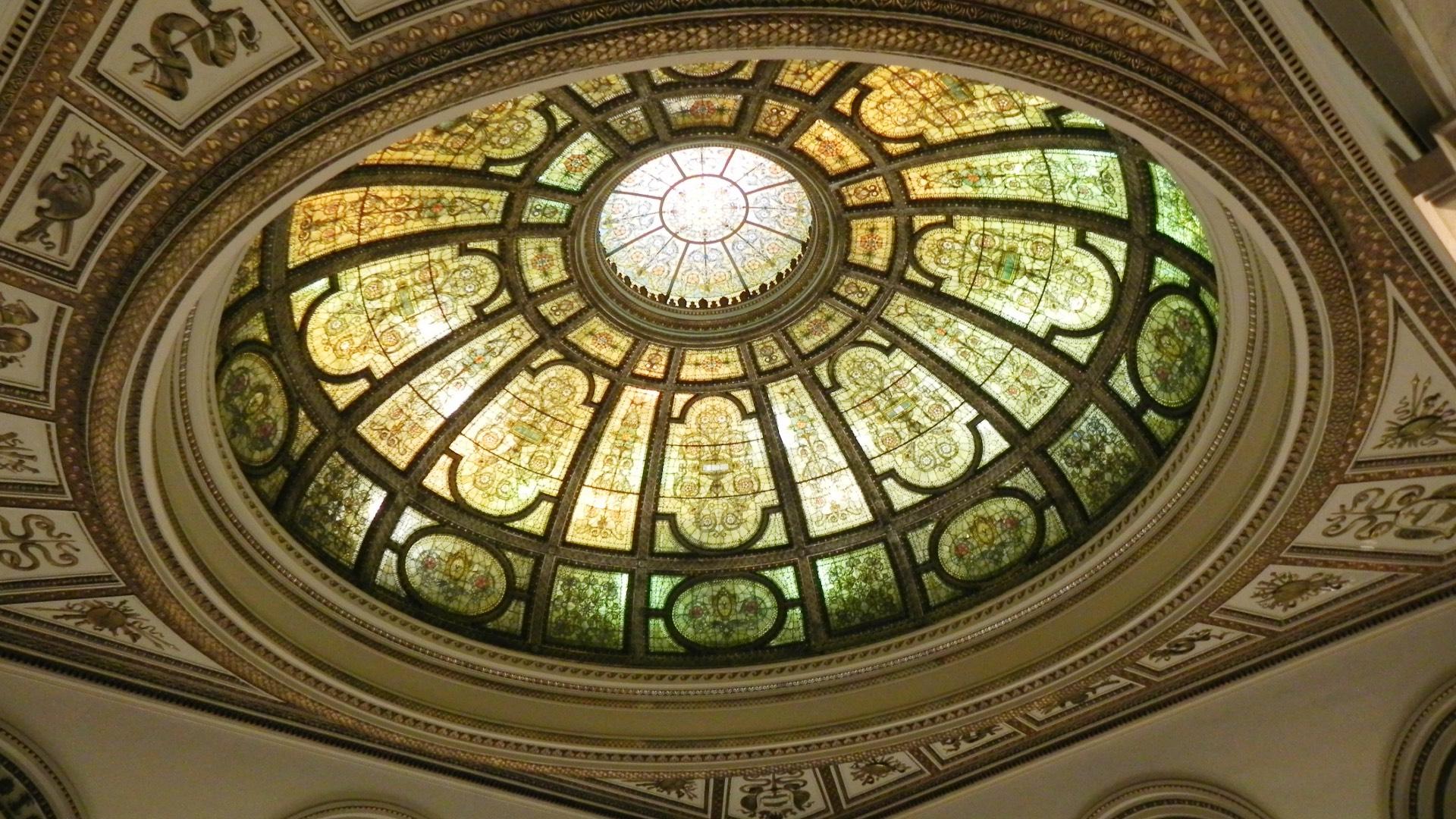 The G.A.R. dome is one of two designed by Louis Comfort Tiffany for the Cultural Center. (Courtesy Department of Cultural Affairs and Special Events) 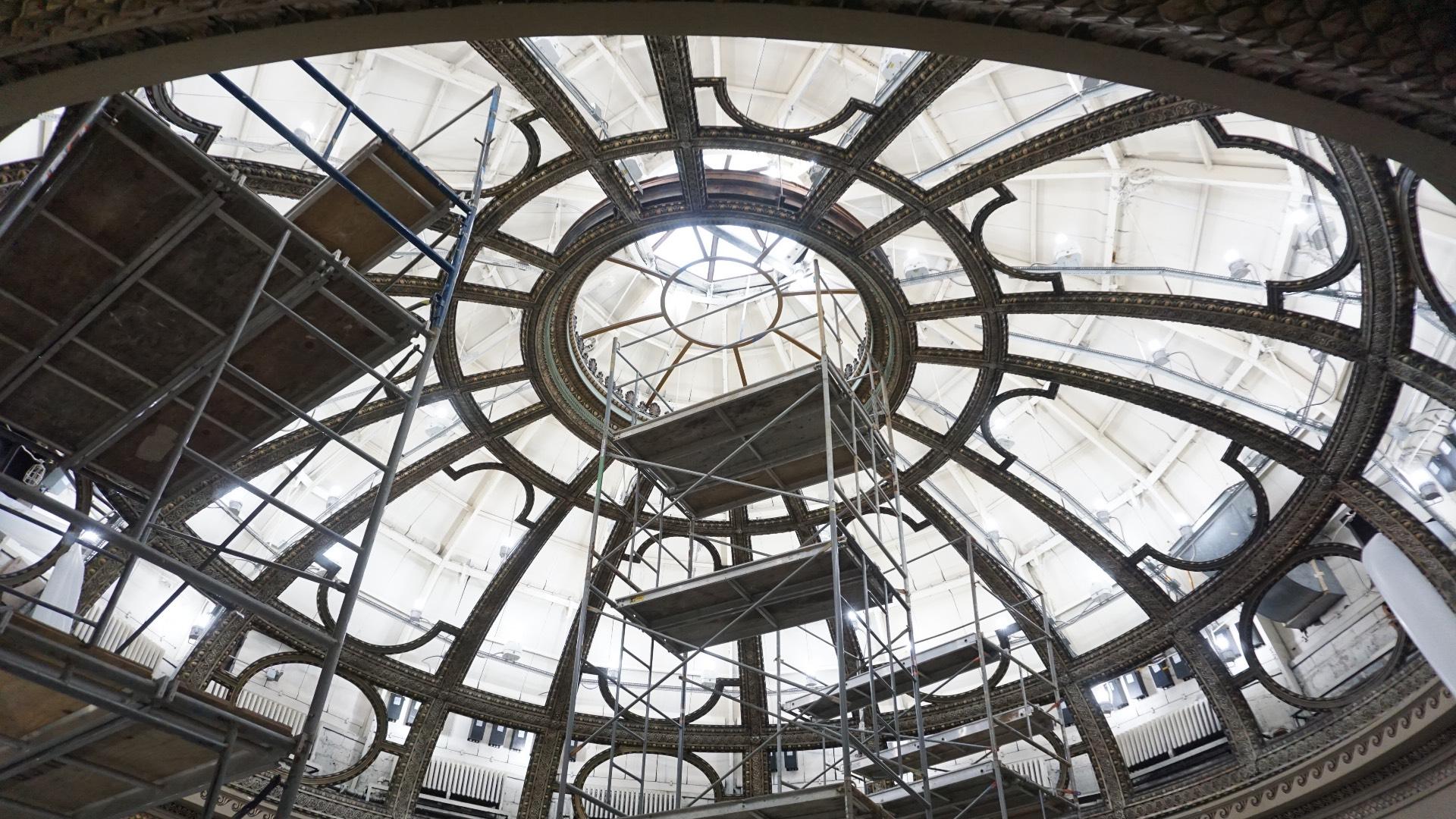 The dome's 62,000 pieces of glass have been removed for restoration and will be reinstalled. (Courtesy of Harboe Architects) 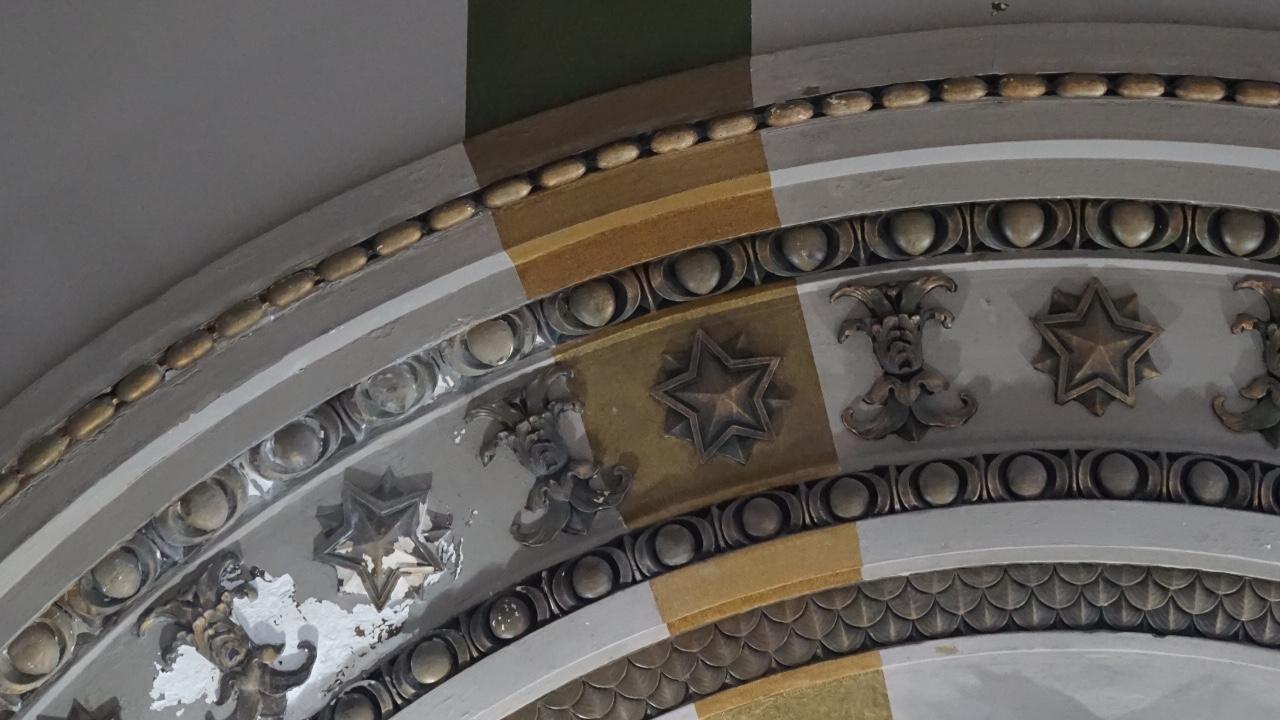 A close-up of the restoration work, removing layers of white paint to reveal hidden detail. (Courtesy of Harboe Architects)