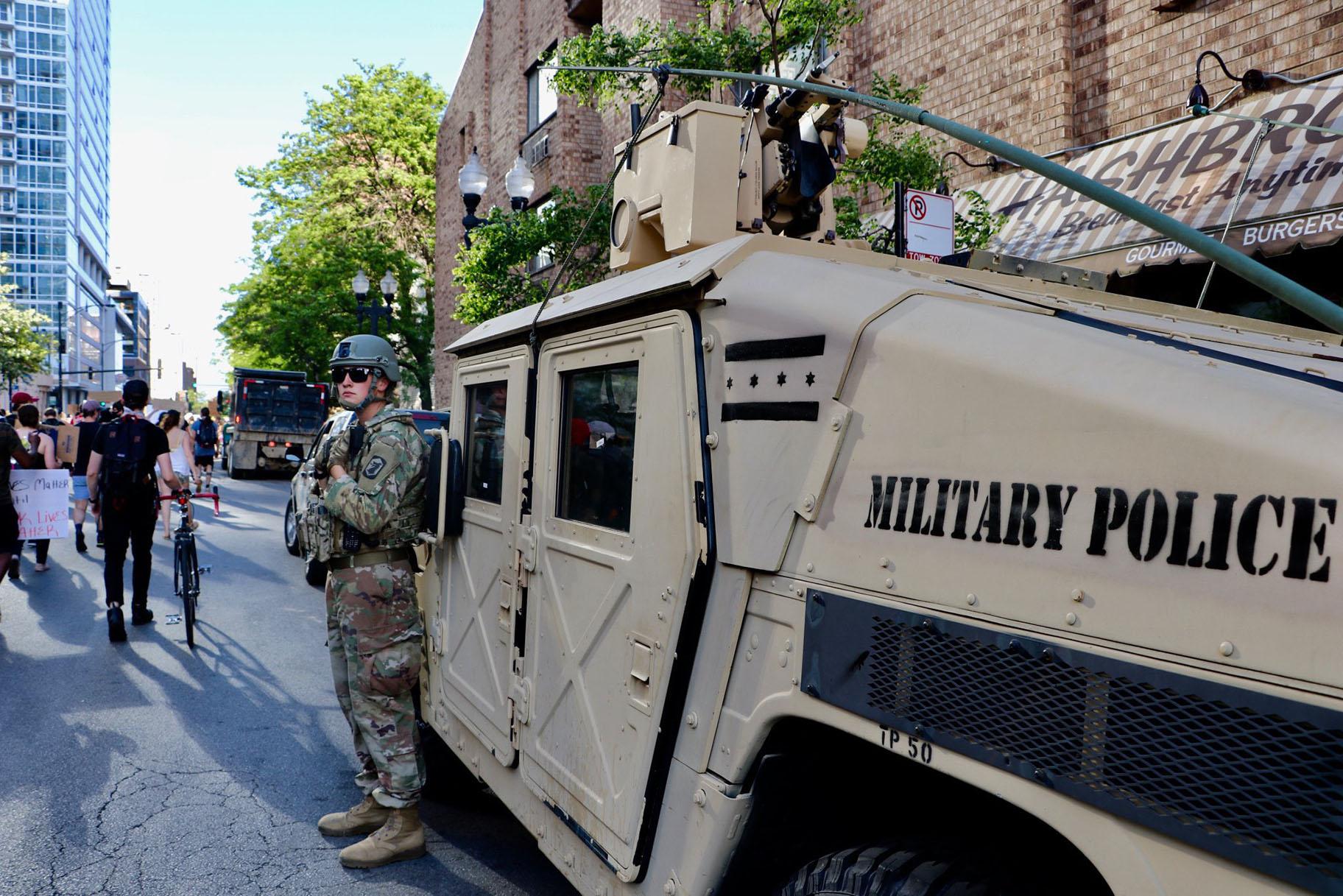 An Illinois National Guard officer watches a protest along Wells Street on June 6, 2020. The march was one of many in the city and across the U.S. sparked by the death of George Floyd while in Minneapolis police custody. (Evan Garcia / WTTW News)

Gov. J.B. Pritzker announced Monday he has activated the Illinois National Guard at the request of Mayor Lori Lightfoot “to support the Chicago Police Department with a verdict expected in the trial of Derek Chauvin,” the former Minneapolis police officer charged in connection with the death of George Floyd.

Pritzker said in a statement that 125 members of the guard will deploy to Chicago on Tuesday to “carry out a limited mission to help manage street closures and will not interfere with peaceful protestors exercising their First Amendment rights.”

READ: Murder Case Against Ex-Cop in Floyd’s Death Goes to the Jury

Lightfoot said she made the request “out of an abundance of caution” and a desire to be “fully prepared” even though there is “no actionable intelligence at this time” in a statement released by the governor’s office.

Illinois State Police will also send troopers to Chicago to “work closely with the Chicago Police Department and other local law enforcement, supporting efforts to keep the community safe,” according to the governor’s office.

Lightfoot made no mention of the request when she took questions from the news media at an unrelated event that took place several hours before the announcement by the governor’s office.

“It is critical that those who wish to peacefully protest against the systemic racism and injustice that holds back too many of our communities continue to be able to do so,” Lightfoot said. “Members of the guard and the Illinois State Police will support the city of Chicago’s efforts to protect the rights of peaceful protestors and keep our families safe.”

The deployment marks the second time in less than a year that the National Guard has been deployed to Chicago. The first deployment came on May 31, after protests sparked by Floyd’s death in police custody boiled over into unrest, looting and violence.

That initial deployment included 375 members of the National Guard.

In September, Lightfoot resisted calls from aldermen to again ask Pritzker to deploy the National Guard in an effort to reduce escalating violence and sustained protests amid the coronavirus pandemic.

During a City Council hearing, Alicia Tate-Nadeau, the head of the Illinois Emergency Management Agency, told aldermen she could not “overstate the visual impact” of deploying the guard to Chicago neighborhoods, especially those made up of Black and Latino residents, and could make Chicagoans feel less safe.

National Guard troops were deployed to cities during the summer of 2020 with “disastrous consequences,” Lightfoot said.

Before 2020, the last time National Guard troops were called to Chicago came in 1968, after Martin Luther King Jr.’s assassination triggered riots, and in response to the police riot outside the 1968 Democratic National Convention.