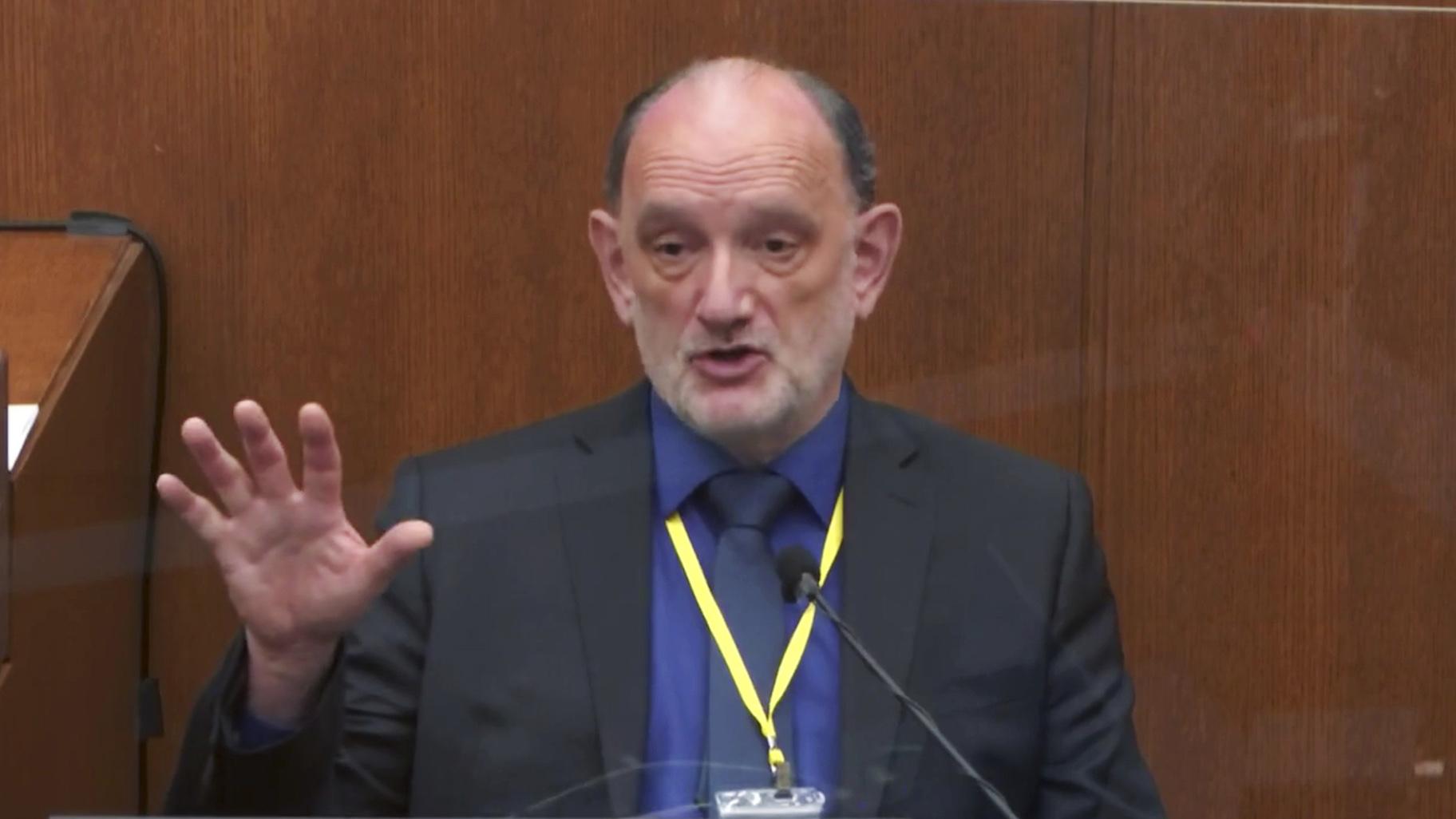 MINNEAPOLIS (AP) — George Floyd died of a sudden heart rhythm disturbance as a result of his heart disease, a forensic pathologist testified for the defense Wednesday at former Officer Derek Chauvin's murder trial, contradicting prosecution experts who said Floyd succumbed to a lack of oxygen from the way he was pinned down.

Dr. David Fowler, a former Maryland chief medical examiner who is now with a consulting firm, said the fentanyl and methamphetamine in Floyd's system, and possibly carbon monoxide poisoning from auto exhaust, were contributing factors in the 46-year-old Black man's death last May.

“All of those combined to cause Mr. Floyd’s death,” he said on the second day of the defense case.

Fowler also testified that he would classify the manner of death “undetermined,” rather than homicide, as the county's chief medical examiner ruled. He said Floyd's death had too many conflicting factors, some of which could be ruled homicide and some that could be considered accidental.

Chauvin attorney Eric Nelson is trying to prove that the 19-year Minneapolis police veteran did what he was trained to do and that Floyd died because of his illegal drug use and underlying health problems.

Prosecutors say Floyd died because the white officer's knee was pressed against Floyd’s neck or neck area for 9 1/2 minutes as he lay on the pavement on his stomach, his hands cuffed behind him and his face jammed against the ground.

Fowler listed a multitude of factors or potential ones: Floyd’s narrowed arteries, his enlarged heart, his high blood pressure, his drug use, the stress of his restraint, the vehicle exhaust, and a tumor or growth in his lower abdomen that can sometimes play a role in high blood pressure by releasing “fight-or-flight” hormones.

Fowler said all of those factors could have acted together to cause Floyd’s heart to work harder, suffer an arrhythmia, or abnormal rhythm, and suddenly stop.

Prosecutor Jerry Blackwell launched an aggressive cross-examination, attacking Fowler's findings down the line. He got Fowler to acknowledge that even someone who dies from being deprived of oxygen ultimately dies of an arrhythmia.

He also got Fowler to admit that he didn’t take the weight of Chauvin’s gear into account when he analyzed the pressure on Floyd’s body. Blackwell further accused Fowler of jumping to conclusions and suggesting to the jury that Floyd had a white pill in his mouth in the video of his arrest. Fowler denied saying that.

In his original testimony, Fowler said carbon monoxide could have contributed to oxygen depletion in Floyd, noting that he was facing the tailpipe end of a squad car. But Floyd's blood was never tested for carbon monoxide.

“You haven’t seen any data or test results that showed Mr. Floyd had a single injury from carbon monoxide. Is that true?” Blackwell asked.

“That is correct, because it was never sent,” Fowler said.

Blackwell also noted that the squad car was a gas-electric hybrid and that Fowler had no data on how much carbon monoxide was actually released. And he suggested that the witness assumed the engine was running at the time. Fowler said he believed it was.

The prosecutor also got Fowler to agree that it would take four minutes to cause irreversible brain damage if the brain is starved of oxygen, and that insufficient oxygen can cause the heart to stop.

"And if a person dies as a result of low oxygen, that person is also going to die ultimately of a fatal arrhythmia, right?” Blackwell asked.

Fowler responded: “Correct. Every one of us in this room will have a fatal arrhythmia at some point.”

Fowler further agreed that Floyd should have been given immediate attention when he went into cardiac arrest because there still was a chance to save him at that point.

A number of medical experts called by prosecutors have said Floyd died from a lack of oxygen because his breathing was constricted by the way he was held down. A cardiology expert rejected the notion that Floyd died of heart problems, saying all indications were that he had "an exceptionally strong heart.”

And he said that Floyd did not complain of vision changes or other symptoms consistent with hypoxia, or insufficient oxygen to the brain, and that he was coherent until shortly before he suddenly stopped moving.

“The bottom line is, moving air in and out, and speaking and making noise is very good evidence that the airway was not closed,” Fowler said.

Blackwell ended his cross-examination by getting two questions before the jury: Whether Chauvin's actions played a role in Floyd's death, or whether Floyd's death was coincidental and unrelated. But the defense objected, and Fowler was not permitted to answer.

Chauvin, 45, is charged with murder and manslaughter in Floyd’s death after his arrest on suspicion of passing a counterfeit $20 at a neighborhood market. The video of Floyd gasping that he couldn't breathe as bystanders yelled at Chauvin to get off him triggered worldwide protests, violence and a furious examination of racism and policing in the U.S.

The defense hasn’t said whether Chauvin will take the stand.

Earlier Wednesday, Judge Peter Cahill turned down a defense request to acquit Chauvin, rejecting claims that prosecutors failed to prove Chauvin’s actions killed Floyd. Requests for an acquittal are routinely made midway through a trial and are usually denied.