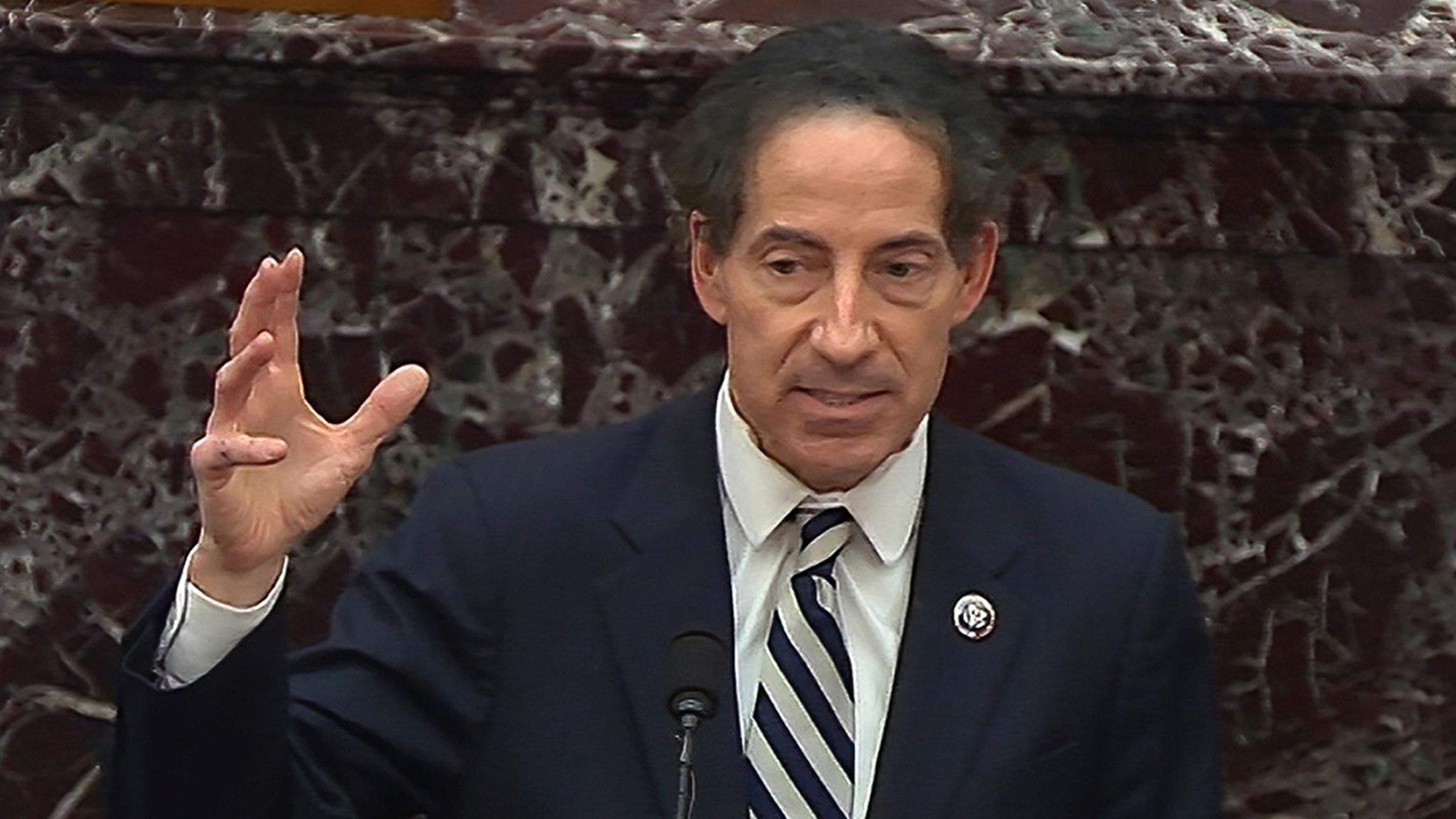 In this image from video, House impeachment manager Rep. Jamie Raskin, D-Md., speaks during the second impeachment trial of former President Donald Trump in the Senate at the U.S. Capitol in Washington, Thursday, Feb. 11, 2021. (Senate Television via AP)

WASHINGTON (AP) — Dire harm from Donald Trump’s false and violent incitements will vex American democracy long into the future unless the Senate convicts him of impeachment and bars him from future office, House prosecutors insisted Thursday as they concluded two days of emotional arguments in his historic trial.

Making their case, they presented piles of new videos of last month’s deadly Capitol attack, with invaders proudly declaring they were merely obeying “the president’s orders” to fight to overturn the election results as Congress was certifying his defeat to Democrat Joe Biden. Trump is accused of inciting the invasion, which prosecutors said was a predictable culmination of the many public and explicit instructions he gave supporters long before his White House rally that unleashed the Jan. 6 attack.

“If we pretend this didn’t happen, or worse, if we let it go unanswered, who’s to say it won’t happen again?” argued prosecutor Rep. Joe Neguse, D-Colo. Even out of office, Democrats warned, Trump could whip up a mob of followers for similar damage.

Trump’s defense will take the Senate floor on Friday, arguing that as terrible as the attack was, it clearly was not the president’s doing. The proceedings could finish with a vote this weekend by the senators who are sitting as impeachment jurors.

The Democrats, with little hope of conviction by two-thirds of the evenly divided Senate, are also making their most graphic case to the American public, while Trump’s lawyers and the Republicans are focused on legal rather than emotional or historic questions, hoping to get it all behind as quickly as possible. Five people died in the Capitol chaos and its aftermath, a domestic attack unparalleled in U.S. history.

Trump’s second impeachment trial, on a charge of incitement of insurrection, has echoes of last year’s impeachment and acquittal over the Ukraine matter, as prosecutors warn senators that Trump has shown no bounds and will pose a continuing danger to the civic order unless he’s convicted. Even out of the White House, the former president holds influence over large swaths of voters.

The Democratic House members acting as prosecutors drew a direct line Thursday from Trump’s repeated comments condoning and even celebrating violence — praising “both sides” after the 2017 outbreak at the white supremacist rally in Charlottesville, Virginia — and urging his rally crowd last month to go to the Capitol and fight for his presidency. He spread false claims about election fraud, without evidence, and urged his supporters to “stop the steal” of the presidency.

Prosecutors used the rioters’ own videos from that day to pin responsibility on Trump. “We were invited here,” said one. “Trump sent us,” said another. “He’ll be happy. We’re fighting for Trump.”

“They truly believed that the whole intrusion was at the president’s orders,” said Rep. Diana DeGette of Colorado. “The president told them to be there.”

At the White House, President Biden said he believed “some minds may be changed” after senators saw chilling security video Wednesday of the deadly insurrection at the Capitol, including of rioters searching menacingly for House Speaker Nancy Pelosi and Vice President Mike Pence.

Though most of the Senate jurors seem to have made up their minds, making Trump’s acquittal likely, the never-before-seen audio and video released Wednesday became a key exhibit.

Senators sat riveted as the jarring video played in the chamber on Wednesday. The footage showed the mob smashing into the building, rioters engaging in hand-to-hand combat with police, with audio of officers pleading for back-up. Rioters were seen roaming the halls chanting “Hang Mike Pence,” and eerily singing out “Where are you, Nancy?” in search of Pelosi.

Videos of the siege have been circulating since the day of the riot, but the graphic compilation offered a moment-by-moment retelling of one of the nation’s most alarming days. And it underscored how dangerously close the rioters came to the nation’s leaders, shifting the focus of the trial from an academic debate about the Constitution to a raw retelling of the assault.

Trump attorney David Schoen took issue, saying the presentation was “offensive” and that the Democrats “haven’t tied it in any way to Trump.”

He told reporters Thursday at the Capitol he believed Democrats were making the public relive the tragedy in a way that “tears at the American people” and impedes efforts at unity in the country.

And by Thursday, senators sitting through a second full day of arguments appeared somewhat fatigued, slouching in their chairs, crossing their arms and walking around to stretch.

One Republican, Sen. James Inhofe of Oklahoma, said during a break: “To me, they’re losing credibility the longer they talk.”

The goal of the two-day presentation by prosecutors from the House, which impeached the outgoing president last month a week after the siege, was to cast Trump not as an innocent bystander but rather as the “inciter in chief” who spent months spreading falsehoods and revving up supporters to challenge the election.

“This attack never would have happened but for Donald Trump,” Rep. Madeleine Dean, one of the impeachment managers, said as she choked back emotion. “And so they came, draped in Trump’s flag, and used our flag, the American flag, to batter and to bludgeon.”

Trump’s lawyers are likely to blame the rioters themselves for the violence.

The first president to face an impeachment trial after leaving office, Trump is also the first to be twice impeached.

His lawyers say he cannot be convicted because he is already gone from the White House. Even though the Senate rejected that argument in Tuesday’s vote to proceed to trial, the issue could resonate with Senate Republicans eager to acquit Trump without being seen as condoning his behavior.

While six Republicans joined with Democrats to vote to proceed with the trial on Tuesday, the 56-44 vote was far from the two-thirds threshold of 67 votes needed for conviction.