WASHINGTON (AP) — House Speaker Nancy Pelosi said Monday that Congress will establish an independent, Sept. 11-style commission to look into the deadly insurrection that took place at the U.S. Capitol.

Pelosi said the commission will “investigate and report on the facts and causes relating to the January 6, 2021, domestic terrorist attack upon the United States Capitol Complex … and relating to the interference with the peaceful transfer of power.”

In a letter to Democratic colleagues, Pelosi said the House will also put forth supplemental spending to boost security at the Capitol.

After former President Donald Trump’s acquittal at his second Senate impeachment trial, bipartisan support appeared to be growing for an independent commission to examine the deadly insurrection.

In her letter Monday, Pelosi said, “It is clear from his findings and from the impeachment trial that we must get to the truth of how this happened.”

She added, “As we prepare for the Commission, it is also clear from General Honoré’s interim reporting that we must put forth a supplemental appropriation to provide for the safety of Members and the security of the Capitol.” 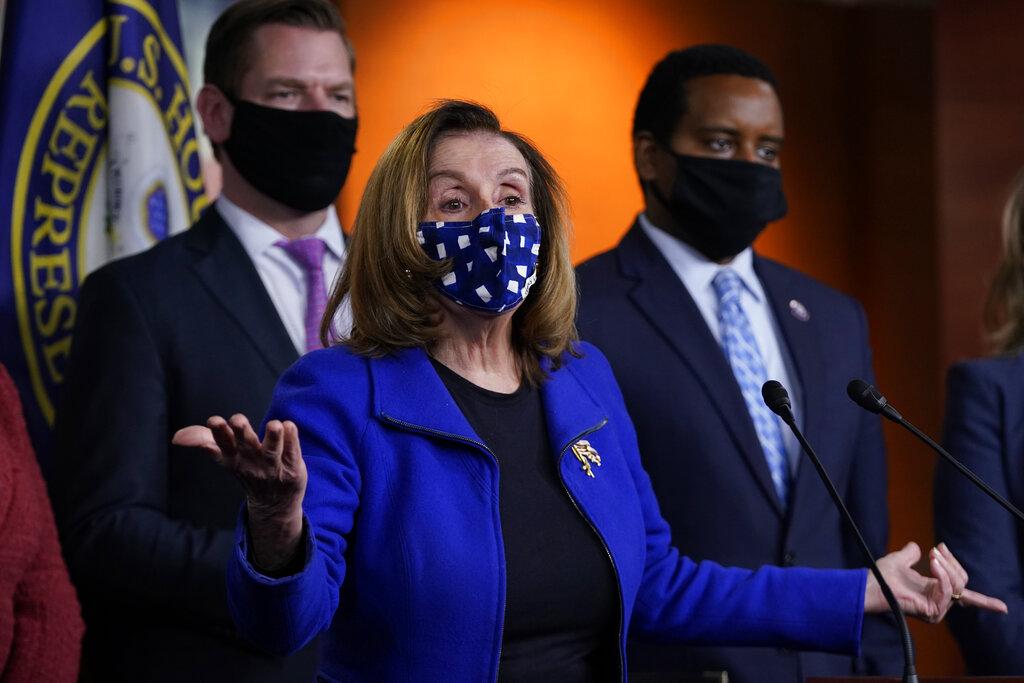 Lawmakers from both parties, speaking on Sunday’s news shows, signaled that even more inquiries were likely. The Senate verdict Saturday, with its 57-43 majority falling 10 votes short of the two-thirds needed to convict Trump, hardly put to rest the debate about the Republican former president’s culpability for the Jan. 6 assault.

“There should be a complete investigation about what happened,” said Louisiana Sen. Bill Cassidy, one of seven Republicans who voted to convict Trump. “What was known, who knew it and when they knew, all that, because that builds the basis so this never happens again.”

Cassidy said he was “attempting to hold President Trump accountable,” and added that as Americans hear all the facts, “more folks will move to where I was.” He was censured by his state’s party after the vote.

An independent commission along the lines of the one that investigated the Sept. 11 attacks would probably require legislation to create. That would elevate the investigation a step higher, offering a definitive government-backed accounting of events. Still, such a panel would pose risks of sharpening partisan divisions or overshadowing President Joe Biden’s legislative agenda.

“There’s still more evidence that the American people need and deserve to hear and a 9/11 commission is a way to make sure that we secure the Capitol going forward,” said Sen. Chris Coons, D-Del., a Biden ally. “And that we lay bare the record of just how responsible and how abjectly violating of his constitutional oath President Trump really was.”

House prosecutors who argued for Trump’s conviction of inciting the riot said Sunday they had proved their case. They also railed against the Senate’s Republican leader, Mitch McConnell, and others who they said were “trying to have it both ways” in finding the former president not guilty but criticizing him at the same time.

A close Trump ally, Sen. Lindsey Graham, R-S.C., voted for acquittal but acknowledged that Trump had some culpability for the siege at the Capitol that killed five people, including a police officer, and disrupted lawmakers’ certification of Biden’s White House victory. Graham said he looked forward to campaigning with Trump in the 2022 election, when Republicans hope to regain the congressional majority.

“His behavior after the election was over the top,” Graham said. “We need a 9/11 commission to find out what happened and make sure it never happens again.”

The Senate acquitted Trump of a charge of “incitement of insurrection” after House prosecutors laid out a case that he was an “inciter in chief” who unleashed a mob by stoking a monthslong campaign of spreading debunked conspiracy theories and false violent rhetoric that the 2020 election was stolen from him.

Trump’s lawyers countered that Trump’s words were not intended to incite the violence and that impeachment was nothing but a “witch hunt” designed to prevent him from serving in office again.

The conviction tally was the most bipartisan in American history but left Trump to declare victory and signal a political revival while a bitterly divided GOP bickered over its direction and his place in the party.

The Republicans who joined Cassidy in voting to convict were Sens. Richard Burr of North Carolina, Susan Collins of Maine, Lisa Murkowski of Alaska, Mitt Romney of Utah, Ben Sasse of Nebraska and Pat Toomey of Pennsylvania.

“It’s frustrating, but the founders knew what they were doing and so we live with the system that we have,” Democratic Del. Stacey Plaskett, a House prosecutor who represents the Virgin Islands, said of the verdict, describing it as “heartbreaking.” She added: “But, listen, we didn’t need more witnesses. We needed more senators with spines.”

McConnell told Republican senators shortly before the vote that he would vote to acquit Trump. In a blistering speech after the vote, the Kentucky Republican said the president was “practically and morally responsible for provoking the events of that day” but that the Senate’s hands were tied to do anything about it because Trump was out of office. The Senate, in an earlier vote, had deemed the trial constitutional.

“It was powerful to hear the 57 guilties and then it was puzzling to hear and see Mitch McConnell stand and say ‘not guilty’ and then, minutes later, stand again and say he was guilty of everything,” said Rep. Madeleine Dean, D-Pa. “History will remember that statement of speaking out of two sides of his mouth,” she said.

Dean also backed the idea of an impartial investigative commission “not guided by politics but filled with people who would stand up to the courage of their conviction.”

Cassidy and Dean spoke on ABC’s “This Week,” Graham appeared on “Fox News Sunday,” and Plaskett appeared on CNN’s “State of the Union.”

Note: This story was originally published Feb. 15, 2021. It has been updated to include our panel discussion with Illinois members of Congress on “Chicago Tonight.”