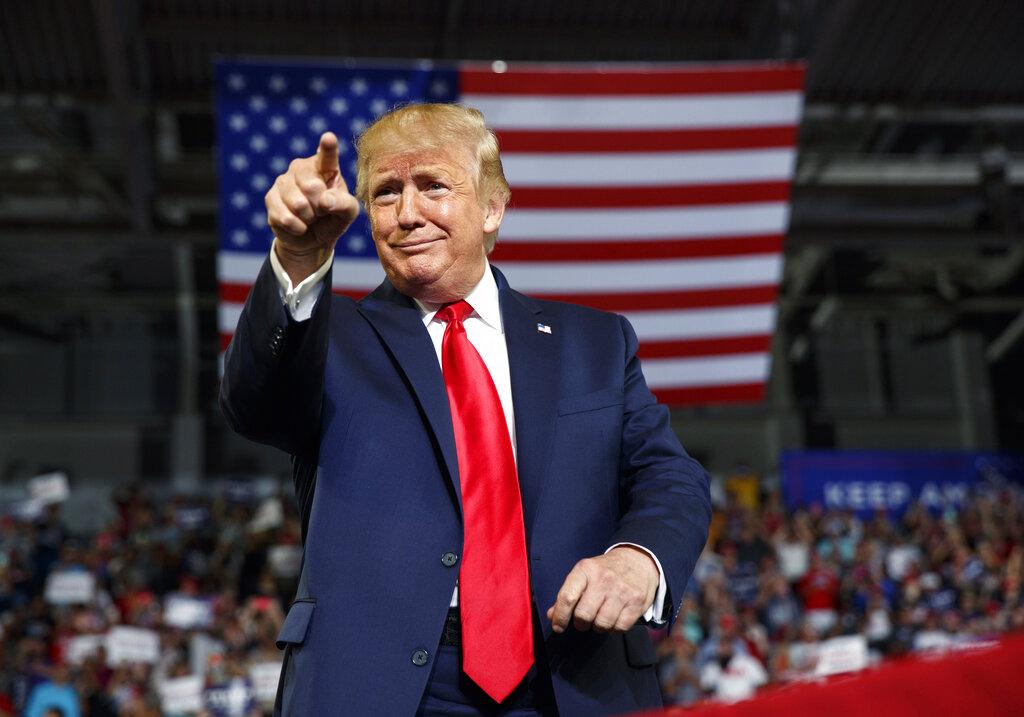 In this Wednesday, July 17, 2019 file photo, President Donald Trump gestures to the crowd as he arrives to speak at a campaign rally at Williams Arena in Greenville, N.C. (AP Photo / Carolyn Kaster, File)

NEW YORK (AP) — Acquitted by the Senate of inciting last month’s U.S. Capitol insurrection, former President Donald Trump faces more fallout from the unrest, including a lawsuit from a congressman Tuesday. But his biggest legal problems might be the ones that go much further back.

In one of what is expected to be many lawsuits over the deadly riot, Democratic U.S. Rep. Bennie Thompson accused Trump of conspiring with far-right extremist groups that were involved in storming the Capitol.

Trump, who made a fiery speech to supporters prior to the riot, could also be hit with criminal charges — though courts, wary of infringing free speech, have set a high bar for prosecutors trying to mount federal incitement cases.

But riot-related consequences aren’t the only thing Trump has to worry about.

With his historic second Senate trial behind him, here’s a look at the legal road ahead for Trump: ___

Atlanta prosecutors opened a criminal investigation into whether Trump attempted to overturn his election loss in Georgia, including a Jan. 2 phone call in which he urged the state’s Secretary of State Brad Raffensperger to “find” enough votes to reverse Biden’s narrow victory.

Fulton County District Attorney Fani Willis, a Democrat elected in November, announced the probe Feb. 10. In the call, Trump told Raffensberger: “I just want to find 11,780 votes, which is one more than we have” to get to erase Biden’s lead, and argued that Raffensberger could alter the results, an assertion the Republican secretary of state firmly rejected.

Details of the call, such as Trump’s focus on the vote total, “lets you know that someone had a clear mind, they understood what they were doing,” Willis told MSNBC last week. “When you’re pursuing the investigation, facts like that — that might not seem so important — become very important.”

Willis’ office declined to identify who was under investigation but said it was focusing on “the matters reported on over the last several weeks,” including Trump’s call. The Washington Post, the Associated Press and other media outlets obtained a recording of the call Jan. 3.

Trump spokesperson Jason Miller described the Georgia inquiry as the continuation of a “witch hunt” — a term Trump himself has used to describe some investigations — and the “Democrats’ latest attempt to score political points” at the expense of the ex-president.

Karl Racine, the attorney general for Washington, D.C., has said district prosecutors could charge Trump under local law that criminalizes statements that motivate people to violence.

But the charge would be a low-level misdemeanor with a maximum sentence of six months in jail.

Federal prosecutors in Washington, meanwhile, have charged some 200 Trump supporters with crimes related to the riot, including more serious conspiracy charges. Many of the people charged said they acted in Trump’s name.

But the bar is very high to charge Trump with any crimes related to the riot. There has been no indication that Trump would be charged in the riot though prosecutors have said they are looking at all angles.

Trump could also be sued by victims, though he has some constitutional protections, including if he acted while carrying out the duties of president.

Manhattan District Attorney Cyrus R. Vance Jr., a Democrat, is in the midst of an 18-month criminal investigation focusing in part on hush-money payments paid to women on Trump’s behalf, and whether Trump or his businesses manipulated the value of assets — inflating them in some cases and minimizing them in others — to gain favorable loan terms and tax benefits.

Vance’s office hasn’t publicly said what it is investigating, citing grand jury secrecy rules, but some details have come out in court fights mounted by Trump’s lawyers over prosecutors’ access to his tax records. Trump’s lawyers have gone to the U.S. Supreme Court twice to block a subpoena for the records, with a ruling on the latest challenge expected in the coming weeks.

Last month, Vance’s office sent subpoenas to local governments in the New York City suburbs seeking information about a sprawling Westchester estate Trump owns there, and 158 acres of land he donated to conservation land trust in 2016 to qualify for an income tax deduction.

Vance, whose term expires at the end of the year, hasn’t announced if he will seek re-election, leaving questions about the future of any Trump-related prosecutions.

Trump no longer has the cloak of immunity from federal prosecution he did while president, although federal prosecutors in New York who had been looking into the hush-money payments have essentially abandoned that probe.

The same U.S. attorney’s office in Manhattan also appears to have moved on from its investigation of Trump’s inaugural committee. That inquiry examined the committee’s spending, including whether foreigners illegally contributed to inaugural events.

A major donor to the inaugural, Imaad Zuberi, pleaded guilty to charges of tax evasion, campaign finance violations and failing to register as a foreign agent. He’s scheduled to be sentenced Thursday in Los Angeles.

New York Attorney General Letitia James’ civil investigation focuses on some of the same issues as Vance’s criminal probe, including possible property value manipulation and tax write-offs Trump’s company, the Trump Organization, claimed on millions of dollars in consulting fees it paid, including money that went to Trump’s daughter Ivanka.

James’ office issued subpoenas to local governments in November 2019 for records pertaining to Trump’s estate north of Manhattan, Seven Springs, after Cohen provided Congress with Trump financial statements that listed the 213-acre property was worth $291 million in 2012 — far higher than the $56.5 million value that a Trump-commissioned appraisal placed on it in 2015.

James, also a Democrat, is also looking at similar issues relating to a Trump office building in New York City, a hotel in Chicago and a golf course near Los Angeles. Recently, her office has won a series of court rulings forcing Trump’s company and a law firm it hired to turn over troves of records.

Investigators have yet to determine whether any law was broken. If criminal wrongdoing is uncovered, James’ office could pursue charges through a county district attorney or with a referral from Gov. Andrew Cuomo or a state agency.

While campaigning for the White House, Biden said he would not direct the Justice Department to pursue charges against Trump, nor stand in the way of investigations it might take up on its own. In one of his first acts as president, Biden issued an executive order requiring all executive branch political appointees to sign a pledge that they won’t interfere with Justice Department investigations.

Mueller’s report included multiple accusations of Trump obstructing justice, including firing FBI Director James Comey over his unwillingness to say Trump was not personally under investigation; pressuring Comey to end an investigation into Trump’s national security adviser Michael Flynn; and instructing White House counsel Don McGahn to have Mueller removed amid media reports that his team was investigating whether Trump had obstructed justice.

Trump’s election loss could hasten the resolution of lawsuits brought by two women who’ve accused him of sexual misconduct.

Lawyers for Summer Zervos, a restaurateur who worked with Trump as a contestant on “The Apprentice,” asked New York’s high court last week to dismiss as moot Trump’s appeal that argued a sitting president can’t be sued in a state court.

Zervos came forward during Trump’s 2016 campaign with allegations he subjected her to unwanted kissing and groping when she sought to talk to him about her career in 2007. Trump denied her allegations and retweeted a message calling her claims “a hoax,” leading Zervos to file the defamation lawsuit against him.

A defamation lawsuit brought by E. Jean Carroll, a former Elle magazine columnist who accused Trump last year of raping her in the mid-1990s, is on hold as an appeals court weighs Trump’s argument that the United States government, rather than Trump as an individual, should be the defendant.

Government lawyers have argued that statements he made about Carroll — including that she was “totally lying” to sell a memoir — fell within the scope of his work as president because Carroll was, in effect, questioning his fitness to hold public office.

A ruling in Trump’s favor would allow the Justice Department to represent him in the matter and could put taxpayers on the hook for any payout that might result. It’s unclear whether the department would maintain that position under Biden.

The Associated Press generally does not identify people who say they have been sexually assaulted, unless they come forward publicly as Zervos and Carroll have.