Plus: Previewing the trial on ‘Chicago Tonight’

WASHINGTON (AP) — Lawyers for Donald Trump on Monday blasted the impeachment case against him as an act of “political theater” and accused House Democrats on the eve of the former president’s trial of exploiting the chaos and trauma of last month’s Capitol riot for their party’s gain.

Trump’s legal brief is a wide-ranging attack on the House case, foreshadowing the claims his lawyers intend to present on the same Senate floor that was invaded by rioters on Jan. 6. The sharp-tongued tone, with accusations that Democrats are making “patently absurd” arguments and trying to “silence a political opponent,” makes clear that Trump’s lawyers are preparing to challenge both the constitutionality of the trial and any suggestion that he was to blame for the insurrection.

“While never willing to allow a ‘good crisis’ to go to waste, the Democratic leadership is incapable of understanding that not everything can always be blamed on their political adversaries, no matter how very badly they may wish to exploit any moment of uncertainty on the part of the American people,” the defense lawyers say.

In their brief, they suggest that Trump was simply exercising his First Amendment rights when he disputed the election results and argue that he explicitly encouraged his supporters to have a peaceful protest and therefore cannot be responsible for the actions of the rioters. They also say the Senate is not entitled to try Trump now that he has left office, an argument contested by even some conservative legal scholars, and they deny that the goal of the Democrats’ case is justice.

“Instead, this was only ever a selfish attempt by Democratic leadership in the House to prey upon the feelings of horror and confusion that fell upon all Americans across the entire political spectrum upon seeing the destruction at the Capitol on Jan. 6 by a few hundred people,” the lawyers wrote.

House impeachment managers filed their own document Monday, asserting that Trump had “betrayed the American people” and that there is no valid excuse or defense.

“His incitement of insurrection against the United States government — which disrupted the peaceful transfer of power — is the most grievous constitutional crime ever committed by a president,” the Democrats said.

The trial will begin Tuesday with a debate and vote on whether it’s even constitutional to prosecute the former president, an argument that could resonate with Republicans keen on voting to acquit Trump without being seen as condoning his behavior. Opening arguments would begin Wednesday at noon, with up to 16 hours per side for presentations.

Under a draft agreement between Senate Majority Leader Chuck Schumer and Senate Republican Leader Mitch McConnell, the proceedings will break Friday evening for the Jewish Sabbath at the request of Trump’s defense team and resume on Sunday. There will likely be no witnesses, and the former president has declined a request to testify.

This impeachment trial will be different because of COVID-19 restrictions.

Rather than sitting at their desks through the trial, senators may be spread out, including in the “marble room” just off the Senate floor, where proceedings will be shown on TV, and in the public galleries above the chamber, to accommodate social distancing, according to a person familiar with the discussions.

Trump’s second impeachment trial  is opening with a sense of urgency — by Democrats who want to hold him accountable for the violent Capitol siege and Republicans who want it over as quickly as possible.

The proceedings are expected to diverge from the lengthy, complicated trial that resulted in Trump’s acquittal a year ago on charges that he privately pressured Ukraine to dig up dirt on a Democratic rival, Joe Biden, now the president. This time, Trump’s rally cry to “fight like hell” and the storming of the Capitol played out for the world to see. Trump very well could be acquitted again, and the trial could be over in half the time.

Biden will be busy with the business of the presidency and won’t spend “too much time watching,” press secretary Jen Psaki said when asked on Monday.

Trump is the first president to be twice impeached, and the only one to face trial after leaving the White House. The Democratic-led House approved a sole charge, “incitement of insurrection,” acting swiftly one week after the riot, the most violent attack on Congress in more than 200 years. Five people died, including a woman shot by police inside the building and a police officer who died of injuries the next day.

So far, it appears there will be few witnesses called, as the prosecutors and defense attorneys speak directly to senators  who have been sworn to deliver “impartial justice” as jurors. Most are also witnesses to the siege, having fled for safety that day as the rioters broke into the Capitol and temporarily halted the electoral count certifying Biden’s victory. 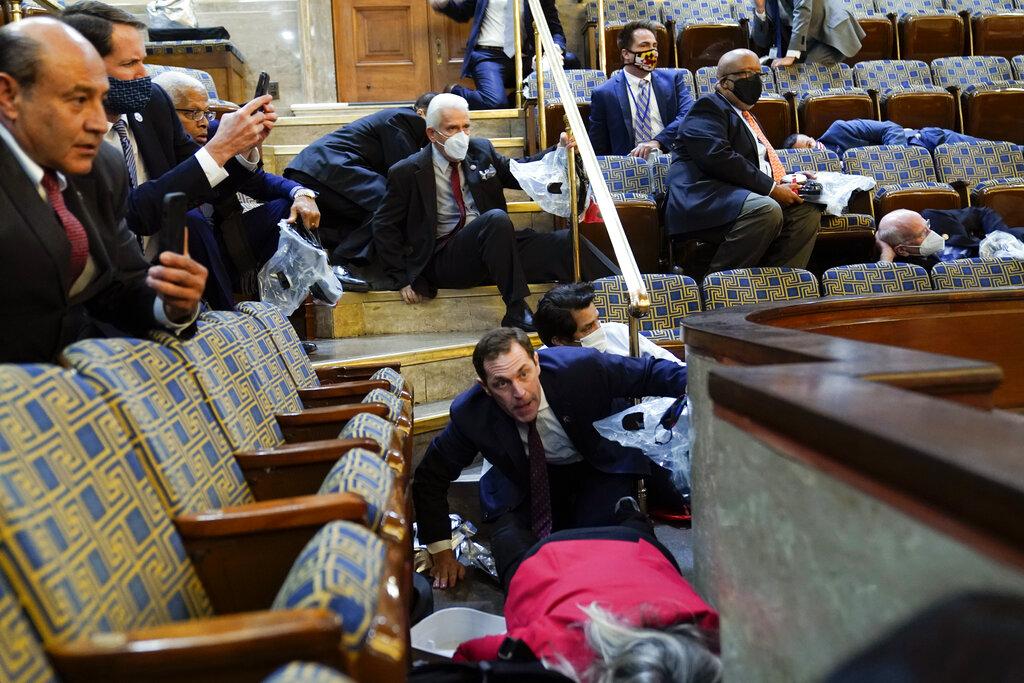 In this Jan. 6, 2021, file photo people shelter in the House gallery as rioters try to break into the House Chamber at the U.S. Capitol. (AP Photo / Andrew Harnik, File)

Instead, House managers prosecuting the case are expected to rely on videos from the siege, along with Trump’s incendiary rhetoric refusing to concede the election, to make their case. His new defense team has said it plans to counter with its own cache of videos of Democratic politicians making fiery speeches.

“We have the unusual circumstance where on the very first day of the trial, when those managers walk on the floor of the Senate, there will already be over 100 witnesses present,” Rep. Adam Schiff, D-Calif., who led Trump’s first impeachment, said on NBC’s “Meet the Press.” “Whether you need additional witnesses will be a strategic call.”

Democrats argue it’s all about holding the former president accountable for his actions, even though he’s out of office. For Republicans, the trial will test their political loyalty to Trump and his enduring grip on the GOP.

Initially repulsed by the graphic images of the siege, Republican senators including Senate Republican leader Mitch McConnell denounced the violence and pointed fingers of blame at Trump. But in recent weeks they have rallied around Trump, arguing his comments do not make him responsible for the violence and questioning the legitimacy of trying someone no longer in office.

Senators were sworn in as jurors late last month, shortly after Biden was inaugurated, but the trial proceedings were delayed as Democrats focused on confirming the new president’s initial Cabinet picks and Republicans sought to put as much distance as possible from the bloody riot.

At the time, Sen. Rand Paul of Kentucky forced a vote to set aside the trial as unconstitutional because Trump is no longer in office, drawing 44 other Republicans to his argument.

The 45 votes in favor of Paul’s measure suggest the near impossibility of reaching a conviction in a Senate where Democrats hold 50 seats but a two-thirds vote — or 67 senators — would be needed to convict Trump. Only five Republicans joined with Democrats to reject Paul’s motion: Mitt Romney of Utah, Ben Sasse of Nebraska, Susan Collins of Maine, Lisa Murkowski of Alaska and Pat Toomey of Pennsylvania.