WASHINGTON (AP) — Democrats marched the impeachment case against Donald Trump to the Senate on Monday night for the start of his historic trial, but Republican senators were easing off their criticism of the former president and shunning calls to convict him over the deadly siege at the U.S. Capitol.

It’s an early sign of Trump’s enduring sway over the party.

The House prosecutors delivered the sole impeachment charge of “incitement of insurrection,” making the ceremonial walk across the Capitol to the Senate. But Republican denunciations of Trump have cooled since the Jan. 6 riot. Instead Republicans are presenting a tangle of legal arguments against the legitimacy of the trial and questions whether Trump’s repeated demands to overturn Joe Biden’s election really amounted to incitement. 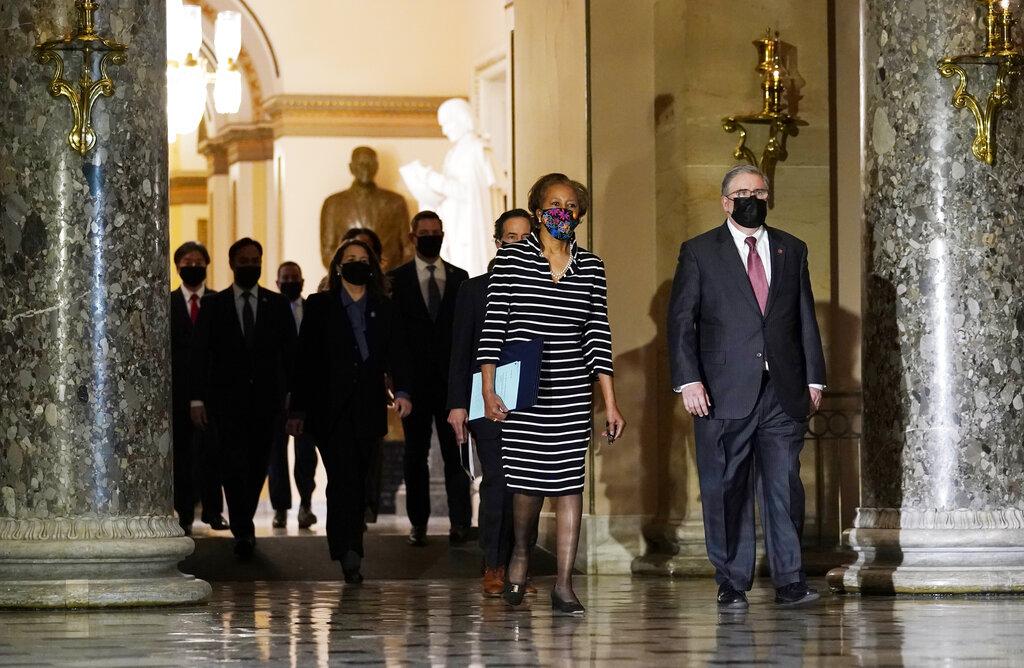 Clerk of the House Cheryl Johnson along with acting House Sergeant-at-Arms Tim Blodgett lead the Democratic House impeachment managers as they walk through Statuary Hall in the Capitol, to deliver to the Senate the article of impeachment alleging incitement of insurrection against former President Donald Trump, Monday, Jan. 25, 2021 in Washington. (AP Photo / Susan Walsh)

What seemed for some Democrats like an open-shut case that played out for the world on live television, as Trump encouraged a rally mob to “fight like hell” for his presidency, is running into a Republican Party that feels very differently. Not only are there legal concerns, but senators are wary of crossing the former president and his legions of followers who are their voters. Security remains tight at the Capitol.

Besides, he suggested, Trump has already been held to account. “One way in our system you get punished is losing an election.”

Arguments in the Senate trial will begin the week of Feb. 8, and the case against Trump, the first former president to face impeachment trial, will test a political party still sorting itself out for the post-Trump era. Republican senators are balancing the demands of deep-pocketed donors who are distancing themselves from Trump and voters who demand loyalty to him. One Republican, Sen. Rob Portman of Ohio, announced Monday he would not seek reelection in 2022 citing the polarized political atmosphere.

For Democrats the tone, tenor and length of the upcoming trial, so early in Biden’s presidency, poses its own challenge, forcing them to strike a balance between their vow to hold Trump accountable and their eagerness to deliver on the new administration’s priorities following their sweep of control of the House, Senate and White House.

Senate Majority Leader Chuck Schumer said Republicans appear more eager to argue over trial process than the substance of the impeachment case against Trump, perhaps to avoid casting judgment on the former president’s “role in fomenting the despicable attack” on the Capitol. 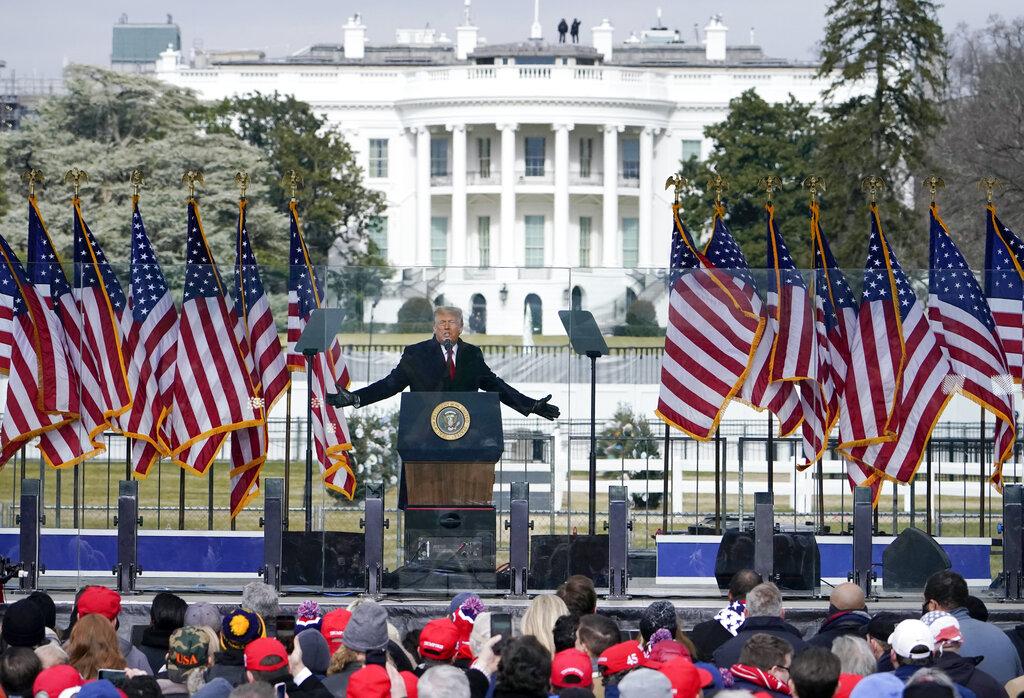 In this Jan. 6, 2021, file photo with the White House in the background, President Donald Trump speaks at a rally in Washington. (AP Photo / Jacquelyn Martin, File)

He said there’s only one question “senators of both parties will have to answer before God and their own conscience: Is former President Trump guilty of inciting an insurrection against the United States?”

Failing to conduct the trial would amount to a “get-out-jail-free card” for other officials accused of wrongdoing on their way out the door, Schumer said.

On Monday, it was learned that Chief Justice John Roberts is not expected to preside at the trial, as he did during Trump’s first impeachment, potentially affecting the gravitas of the proceedings. The shift is said to be in keeping with protocol because Trump is no longer in office.

Instead, Sen. Patrick Leahy, D- Vt., who serves in the largely ceremonial role of Senate president pro-tempore, is set to preside.

Leaders in both parties agreed to a short delay in the proceedings that serves their political and practical interests, even as National Guard troops remain at the Capitol amid security threats on lawmakers ahead of the trial.

The start date gives Trump’s new legal team time to prepare its case, while also providing more than a month’s distance from the passions of the bloody riot. For the Democratic-led Senate, the intervening weeks provide prime time to confirm some of Biden’s key Cabinet nominees.

Sen. Chris Coons, D-Del., questioned how his colleagues who were in the Capitol that day could see the insurrection as anything other than a “stunning violation” of the nation’s history of peaceful transfers of power.

“It is a critical moment in American history,” Coons said Sunday in an interview.

An early vote to dismiss the trial probably would not succeed, given that Democrats now control the Senate. Still, the mounting Republican opposition to the proceedings indicates that many GOP senators would eventually vote to acquit Trump. Democrats would need the support of 17 Republicans — a high bar — to convict him.

Sen. Tom Cotton, R-Ark., said he doesn’t believe the Senate has the constitutional authority to convict Trump after he has left office.

“I think a lot of Americans are going to think it’s strange that the Senate is spending its time trying to convict and remove from office a man who left office a week ago,” Cotton said.

Democrats reject that argument, pointing to an 1876 impeachment of a secretary of war who had already resigned and to opinions by many legal scholars. Democrats also say that a reckoning of the first invasion of the Capitol since the War of 1812, perpetrated by rioters egged on by a president as Electoral College votes were being tallied, is necessary to ensure such a siege never happens again.

A few GOP senators have agreed with Democrats, though not close to the number that will be needed to convict Trump.

Sen. Mitt Romney, R-Utah, said he believes “what is being alleged and what we saw, which is incitement to insurrection, is an impeachable offense.” Romney said, “If not, what is?”

But Romney, the lone Republican to vote to convict Trump when the Senate acquitted the then-president in last year’s trial, appears to be an outlier.