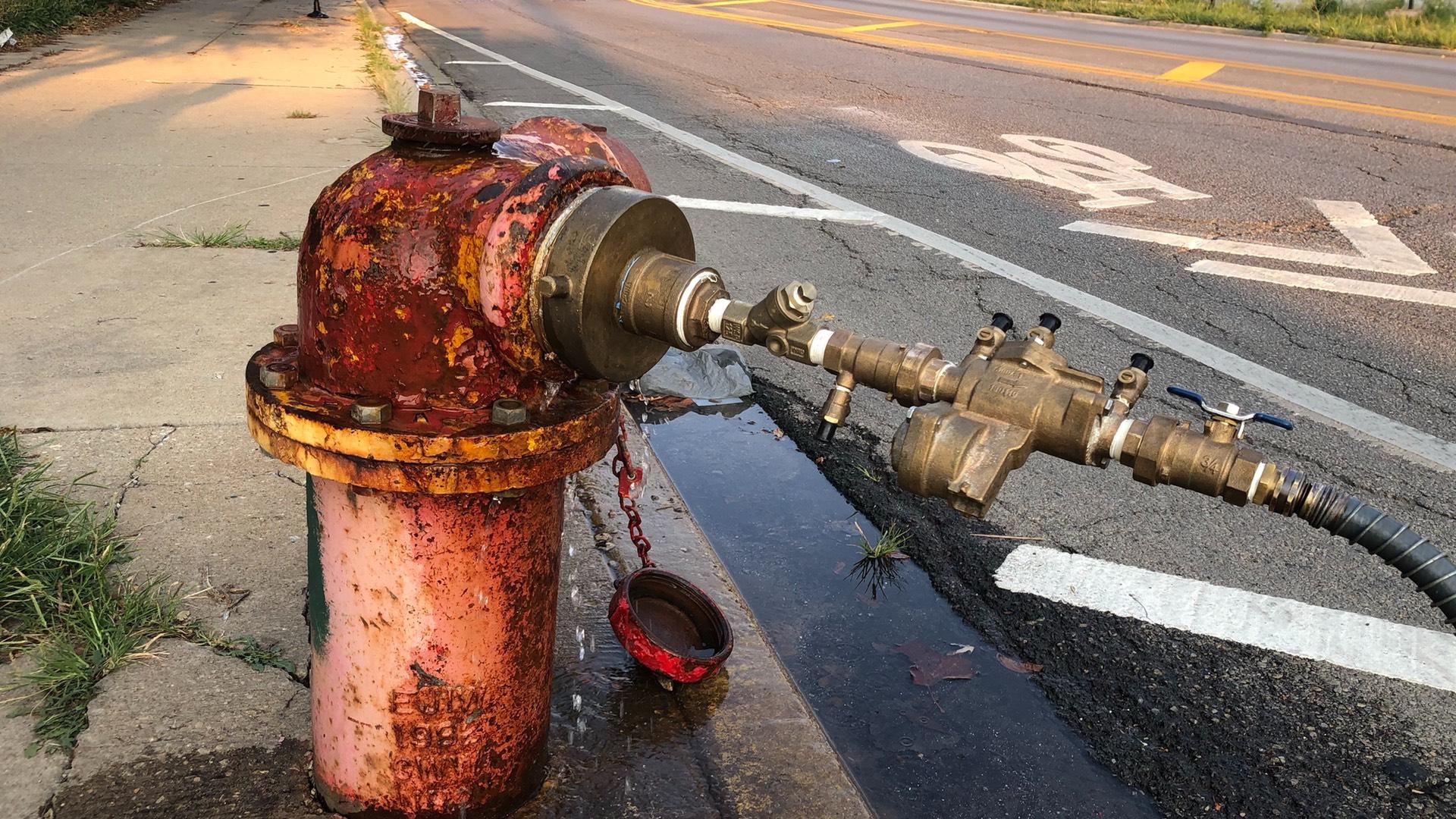 A Reduced Pressure Zone valve, attached to hydrant, is designed to prevent backflow, but it also prevented many gardeners from accessing water this growing season. (Patty Wetli / WTTW News)

As the days become shorter and colder, peak outdoor growing season in Chicago is coming to an end. Gina Jamison, founder of Kuumba Tre-Ahm Community Garden in East Garfield Park, is uncharacteristically ready to pack it in until next spring.

“It’s just been kind of depressing,” said Jamison. “The energy’s not there.”

Blame COVID-19, in part, for the malaise. The coronavirus pandemic not only delayed planting in the spring, due to the state’s stay-at-home order, but it also took most of the “community” out of community gardening in 2020, Jamison said. Holding events at Kuumba Tre-Ahm was a non-starter, and even group work days were canceled out of concerns over the ability to maintain appropriate social distance.

“It just deflated the energy,” she said.

Then there was the weather, which served up a potpourri of calamities: a late spring frost, the wettest May on record, a blistering summer heatwave and a bizarre derecho that struck in August with hurricane force winds that tore the top off Jamison’s peach tree.

“If it’s not one obstacle, it’s another,” said Jamison.

The cherry on top of that sundae of trials and tribulations was a new city policy related to hydrant access, made public in February, which blindsided Chicago’s urban agriculture community.

Specifically, growers learned they would be required to purchase a piece of plumbing equipment and have it tested by a certified professional, which in total could cost upward of $1,500. And all of that would have to happen before the city would grant a permit for hydrant access, the water source that sustains a significant number of Chicago’s urban farms and community gardens.

“When I first learned of the policy, I thought, ‘This cannot be true,’” said Jamison. 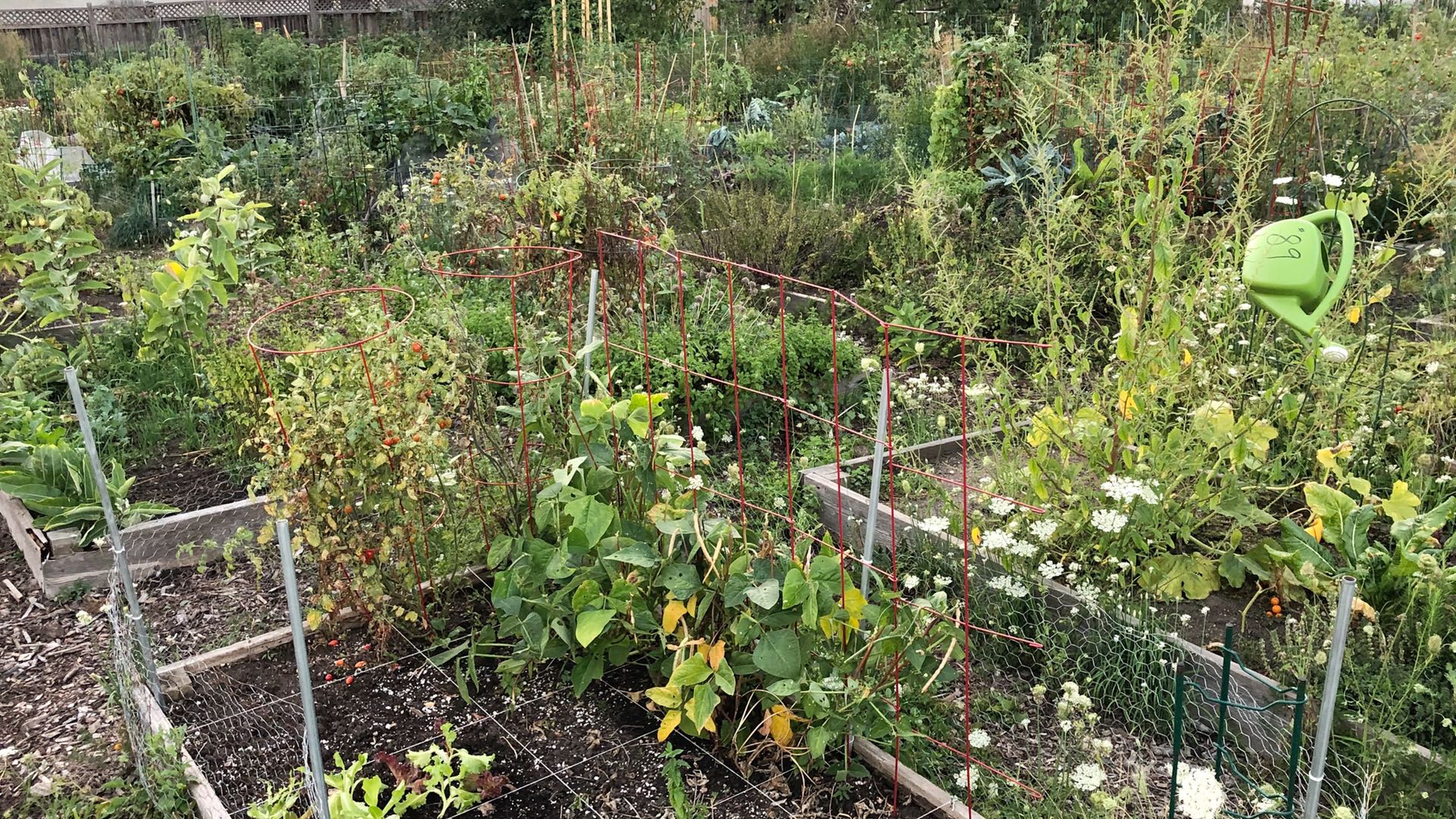 The city touts community gardens as a source of healthy, nutritious produce, but water is hard to come by. (Patty Wetli / WTTW News)

Chicago’s urban agricultural movement is frequently touted by officials as an emerging jobs creator and is positioned as a key means of providing healthier, more nutritional food to parts of the city where there aren’t a lot of places for people to buy fresh fruits and vegetables.

Yet water, a vital resource for any agricultural enterprise, is hard to come by.

Many of the city’s farms and community gardens are located on vacant lots, which is why they get the land for cheap (or occasionally even for free), but, here’s the catch 22, there’s usually no built-in water supply.

Some farms have the capital to invest in an irrigation system, but a lot don’t. Gardeners, if they’re lucky, can sweet talk a neighboring homeowner into cutting a deal on a hose hookup. But for plenty of growers, hydrants have been the answer to their water needs.

Even though obtaining hydrant access has become an increasingly formalized process in recent years, no one saw the latest, more stringent requirements coming, said Sean Ruane, executive director of Advocates for Urban Agriculture.

AUA had been making headway with the city on the water access issue, he said, but the new policy has set back all that progress.

“Policies like this, we’ve been laughing so we don’t cry,” Ruane said.

At the center of the tempest is a piece of plumbing hardware called a Reduced Pressure Zone valve, or RPZ for short. It’s a backflow prevention device, designed to protect drinking water from potential contaminants. If the flow from a hydrant to a farm or garden were to reverse for some reason, the contaminated backwash would never re-enter the hydrant or, ultimately, make its way into anyone’s drinking water.

RPZ valves cost approximately $250, versus the $5 vacuum breakers gardens had been using for backflow prevention prior to the new regulations. In addition to the increased expense of the hardware itself, assemblies need to be tested and approved by a certified Cross-Connection Control Device Inspector (CCCDI), and that’s how the total price tag for an RPZ shoots up into four digits.

Gardeners only became aware of the RPZ requirement when their hydrant permits were refused in the spring, Ruane said.

“There was no dialogue with gardeners or organizations like us,” he said.

For the city’s more loosely organized “block club-type” community gardens, the RPZ was more than their meager-to-nonexistent budgets could afford, Ruane said. On top of that, he added, the Water Department’s new policy stated that a garden had to be incorporated as a nonprofit in order to obtain a hydrant permit, a hoop many all-volunteer groups didn’t have the time, money or expertise to jump through.

“That came out of left field,” Ruane said.

AUA lobbied the city to change or relax the new rules, particularly in light of the coronavirus pandemic, which had more people than ever interested in growing their own food. While those talks were in progress, gardeners were stuck schlepping buckets of water, or any other container they could scrounge up, to their vegetable plots. This was true even at community gardens in possession of the proper nonprofit credentials and the financial means to purchase an RPZ, with permits slow in coming.

Eventually AUA received some concessions from the city. The nonprofit requirement was jettisoned, along with a stipulation to have the RPZ certified twice a year instead of just once. Another win: The city agreed to charge urban farms for water at roughly the same rate as community gardens versus a prior fee structure that treated farms like street festivals.

By midsummer, a number of gardens, especially those under the NeighborSpace umbrella, had purchased the necessary RPZ, had it tested and certified, and received their hydrant permit. But the “block club”-type gardens — picture a bunch of neighbors who’ve pitched in to improve a vacant lot — were left high and dry. Even with a grant from AUA to cover the RPZ cost, navigating the system remained a barrier.

“I would say the majority of folks have been able to adapt to keep their garden going, but they’re not thriving,” Ruane said. “It’s genuinely discouraged people from growing food.”

Ald. Daniel La Spata (1st Ward) said his office heard from constituents throughout the spring and summer about the costly and cumbersome nature of the policy. From the RPZ requirement to insurance agreements to a nearly $1,000 fee to remove a hydrant’s custodian cap, the policy was cost prohibitive for many residents, he said.

“Imagine thousands of dollars in start-up costs. You’re going to say, ‘Scrap it,’” La Spata said. “The cost is so high, very few are willing or able to take it on for a few months of water.” 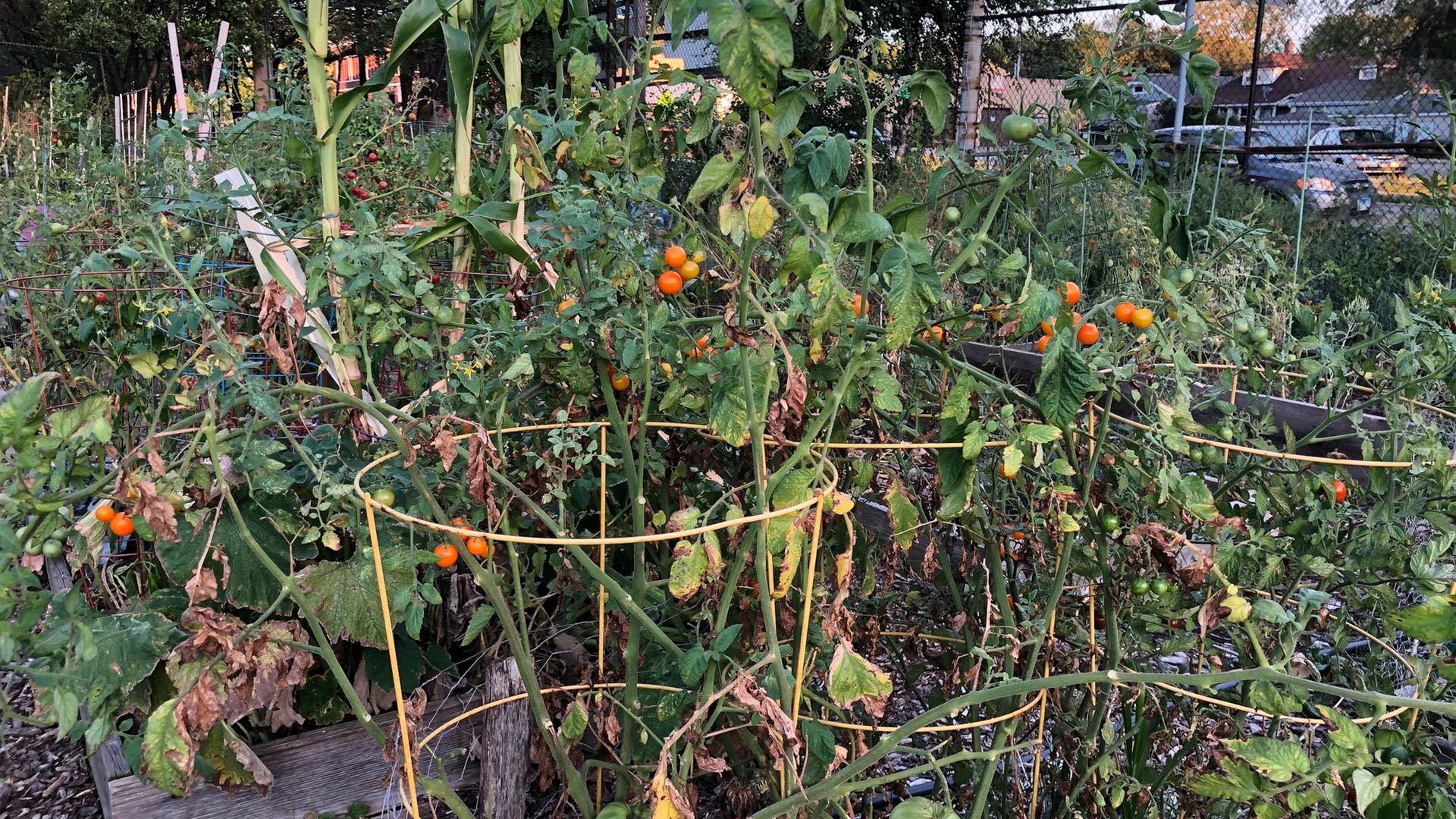 RPZs have become the industry standard in the past couple of years, following concerns about backflow incidents, according to the Illinois EPA’s guidance pertaining to drinking water.

The Water Department’s stance on hydrant access is one of safety first, per a statement sent to WTTW News in response to a request for comment on the RPZ requirement.

“The main priority of the Department of Water Management is the safety of Chicago’s water. Part of protecting our drinking water system is reviewing and updating policy — as well as infrastructure — on a regular basis. The new policy protects against cross-contamination and creates greater transparency about where water is being pulled out of the system,” the agency said in a statement.

No one’s disputing the need to keep contaminants out of Chicago’s water supply, rather the issue is the way the policy was rolled out, said La Spata.

“This is for the safety and integrity of our water system. Of course, we all want that,” he said. “But with almost every other policy, Chicago goes to great lengths for ‘socialization’ before the policy takes effect. It’s extraordinary and concerning they wouldn’t do that here.”

Ruane faulted the Water Department for approaching water access from an adversarial rather than a collaborative position.

“They’re operating as if gardens and farms are misusing hydrants and need to be kept in check rather than viewing them as assets,” he said. “It’s a mentality issue.”

Not including urban agriculture representatives in the decision-making process led to a flawed policy, Jamison said.

“They’re not even considering the benefits (of gardens). It’s community, it’s food, it’s so many things that branch from this one entity,” Jamison said. “The people sitting at the table just don’t get it.”

At this point, Ruane is declaring the 2020 growing season a wash and AUA is focused on making sure a more equitable policy is in place by the 2021 season.

La Spata said the potential exists for the City Council to hold hearings or to introduce an ordinance that could at least address fees and rate structures.

“We need to find ways to lift up safety but also create a fair and less expensive path to water access,” he said. 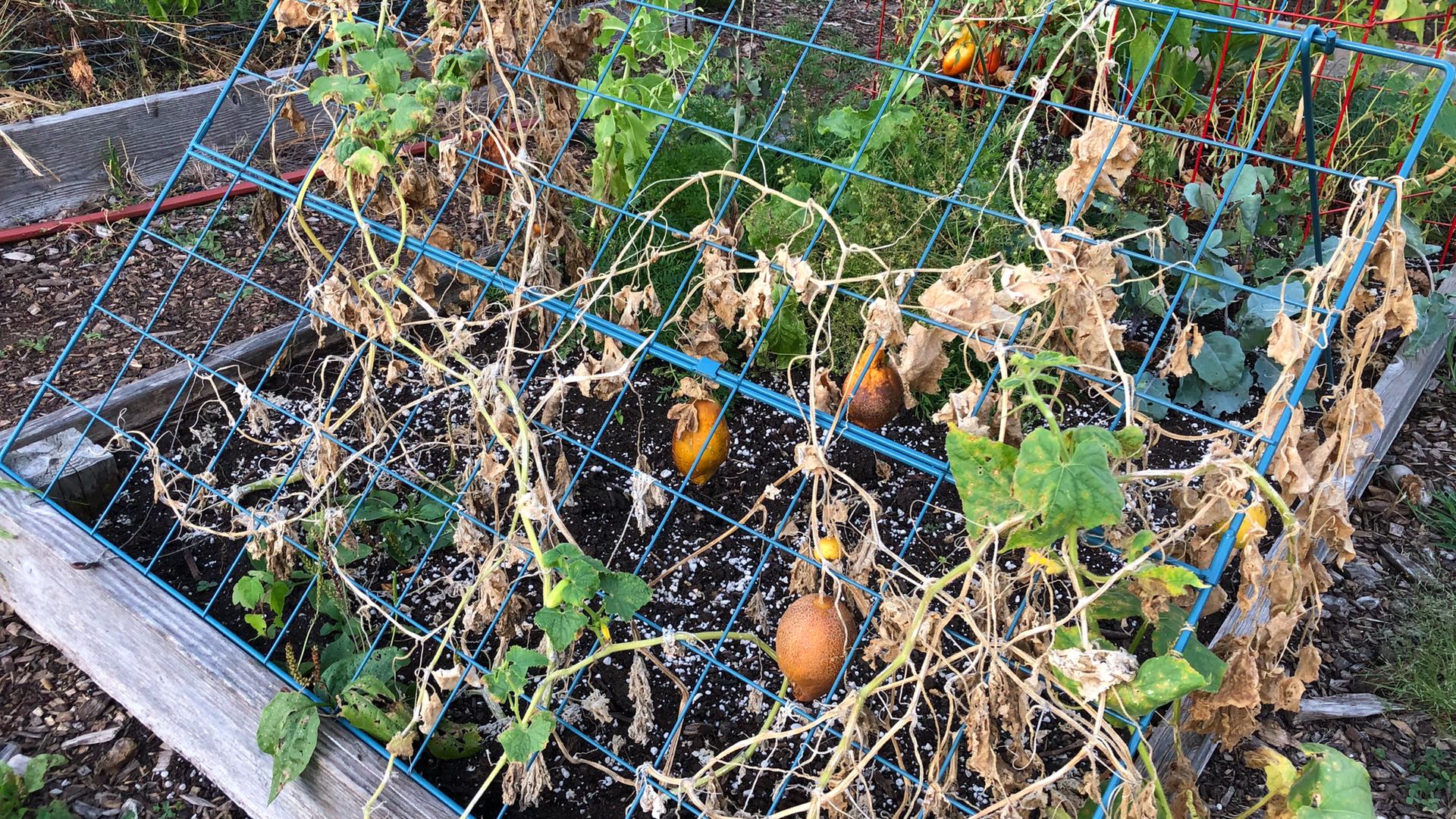 For some gardeners, the 2020 growing season died on the vine. (Patty Wetli / WTTW News)

Jamison made it through the summer, barely.

Kuumba Tre-Ahm’s rain barrels were depleted due to drought. The neighboring homeowner who’d granted the garden spigot access was having plumbing issues of their own, eliminating that water source.

Jamison’s hydrant permit finally came through in late August, but even that felt like a hollow victory. The nearest hydrant had its custodian cap firmly in place, and she didn’t have $938 to pay for its removal. When a sympathetic Water Department employee found another hydrant across the street, half a block away, without a cap, Jamison wasn’t sure it was the effort.

Her permit is only good through November, and then she’ll need to apply again come spring, which has got her thinking: “Why don’t I just wait till next year.”